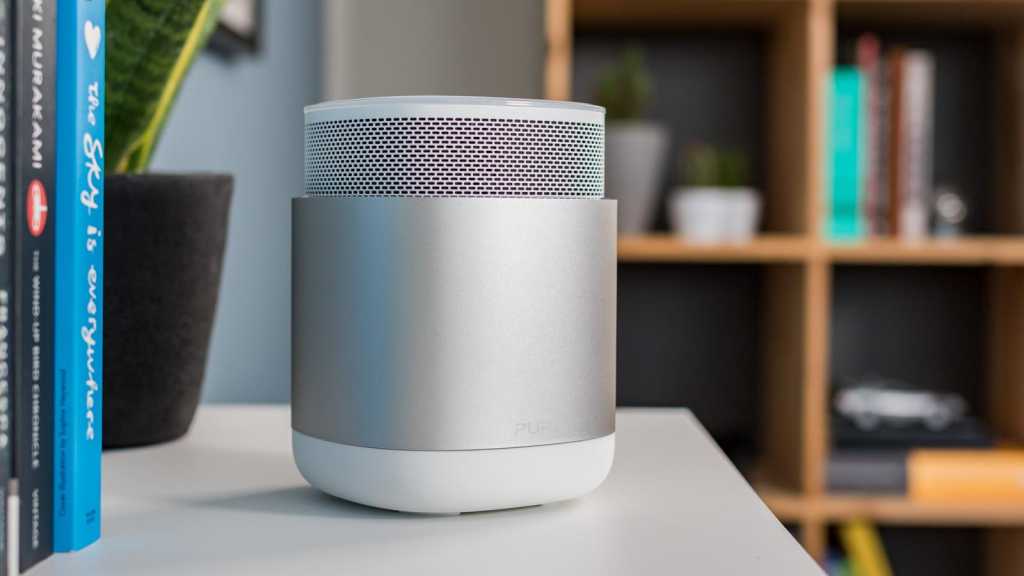 The Pure DiscovR delivers excellent, room-filling audio in a way that suits you. It has a premium price tag – higher than all of Amazon’s Echo devices – but compensates with a number of great features, some exclusive to this device. We’d like it to be slightly cheaper, and the microphones be a little more effective, but there’s really little to complain about here. If you’re looking for maximum flexibility without compromising on sound then the DIscovR could be the one for you.

The recent proliferation of Alexa-enabled devices shows no sign of abating. Pure, a brand renowned for their premium digital radios, have become the latest company to branch out into the burgeoning smart speaker space.

The DiscovR is a premium device that aims to take the best of Amazon’s smart assistant and build on it, with a number of different options to suit whatever situation you’re in.

The Pure DiscovR currently retails in the UK for £229.99. You can buy it now at  Amazon, John Lewis and Currys PC World.

At this price point, it is directly competing with the likes of the Sonos One and Google Home Max, which are available for £185 and £299 respectively at the time of writing.

With many more affordable smart speakers on the market, the Pure DiscovR is firmly establishing itself as a premium product, so it must be judged like that. Sub-par sound simply cannot be tolerated when you’re splashing out over £200. 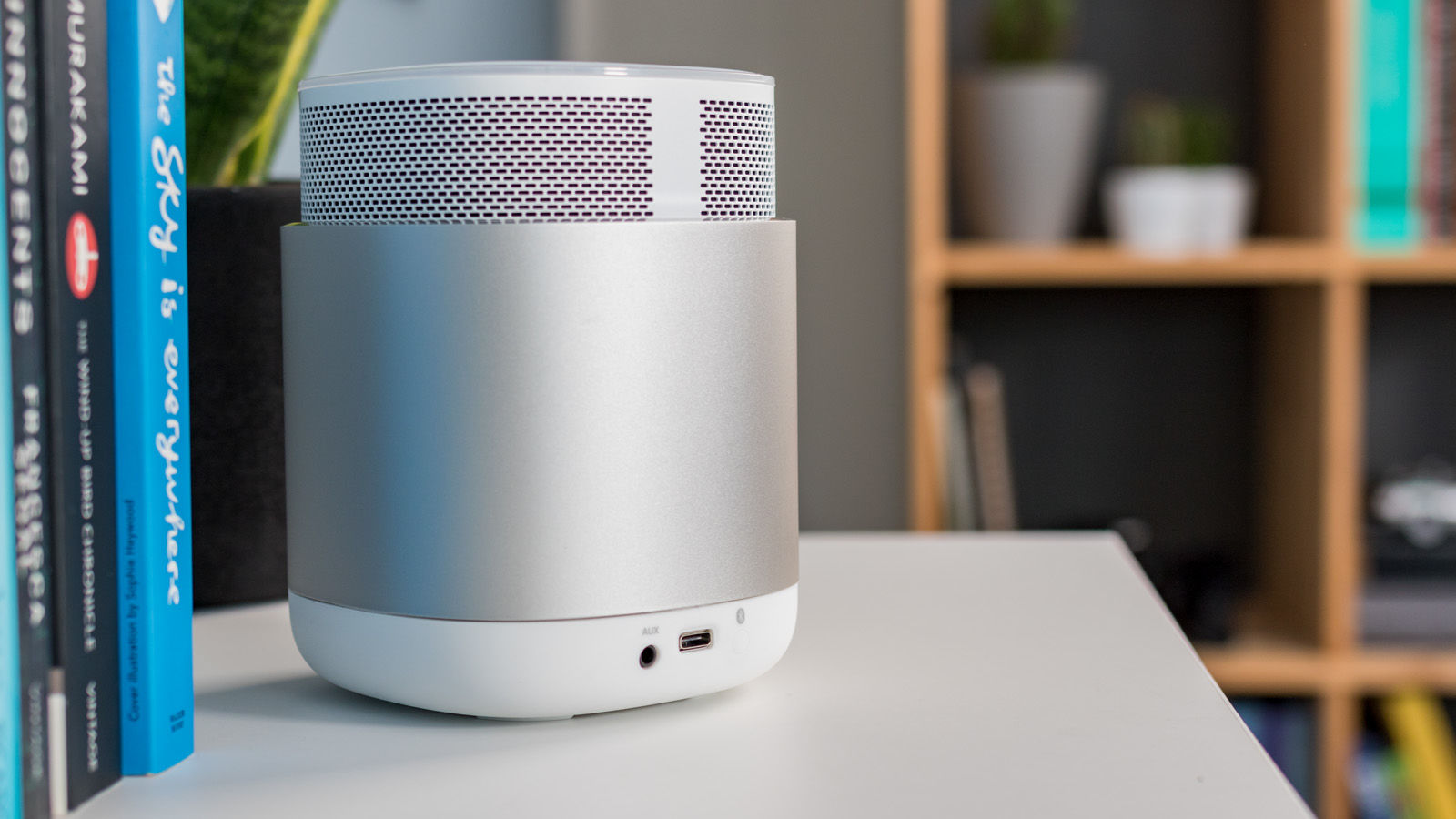 The Pure DiscovR is not easily recognisable as a smart speaker upon first glance, especially if you have physically deactivated the microphone (more on that later).

The rounded cube design is at odds with the wave of fabric-clad devices being released by the likes of Amazon and Google, but Pure seems comfortable with that.

It still looks and feels like a high-end device, particularly with the sleek aluminium enclosure and steel speaker grilles. The device as a whole has a real minimalist feel, with everything else happening on the top panel. This touch-sensitive control hub features a number of intuitive controls which allow you to adjust settings on the device just as effectively with your fingers as you can with your voice.

In addition to switching between three modes for listening (Wi-Fi, Bluetooth, AUX) and adjusting the volume, there is a dedicated music discovery button and customisable Quick Corners

Exclusive to the Pure DiscovR, this allows you to add four presets of your choosing to fully customise your experience. The options are wide-ranging, from a weather and smart home commands, to music playlists and radio stations. Setup is simple, long pressing your corner of choice before speaking your command. The device will confirm it’s been added by carrying out said action.

We tested the Silver design, but you can also pick it up in Graphite. The device seems well suited to a living room environment, so these colour options aim to complement existing design choices in your home.

The DiscovR’s most notable design choice has been made with privacy in mind. In an era when many are worrying about how much our smart devices are listening in to our conversations, Pure allow you to physically deactivate the microphones when pushing down on the touch panel, giving you welcome peace of mind.

Cleverly known as Mic Drop, this makes the device a far more compact package, but you won’t be able to enjoy your audio this way, so think of it as a ‘do not disturb’ mode. If you want the best of both worlds, you can easily use the touch panel to achieve the same effect. 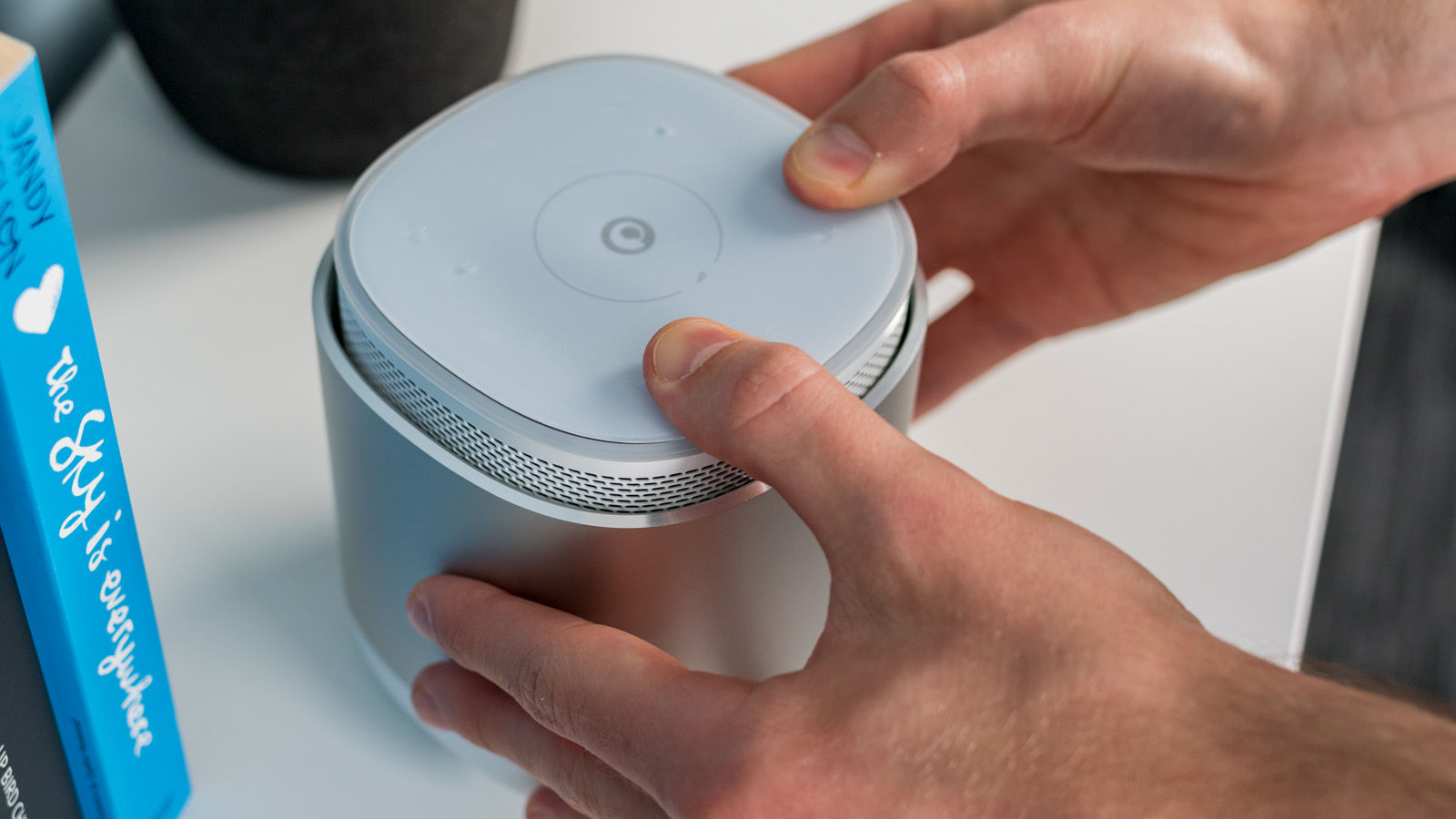 When fully extended, the DiscovR increases from 105mm to 140mm in height, but this remains much smaller than the majority of high-end speakers.

On the back of the device, you get a dedicated Bluetooth button for easy pairing and much welcomed USB-C charging port, in addition to the 3.5mm AUX port.

Pure don’t include a wall adapter in the box, in the interests of the environment, which is probably a wise decision considering the amount of plugs we have lying around!

We think the device could have benefitted from an LED display, as can be found on Amazon’s Echo Dot with Clock, but this device is still great for entertaining guests.

Despite being a first generation product, Pure seems to have learnt from the mistakes of other manufacturers. The design of the DiscovR takes a few pointers from the competition, but ultimately produces a device that is truly unique.

Unless you’re an ardent audiophile, the rich sound from the DiscovR is be a joy to behold. The downward firing 360° subwoofer delivers full-bodied, room-filling audio that should do your music justice. Combined with dual tweeters, you get a crisp, balanced sound which should only enhance your experience.

We tested a variety of music and voice content, to give a comprehensive overview of the speaker’s strengths and weaknesses.

It coped admirably with James Blake’s ‘Limit to your Love’, often considered to be a good benchmark bass test.

We found it particularly effective with RnB music, Beyoncé classics such as ‘Crazy in Love’ and ‘Best Thing I Never Had’ sound excellent despite continuous variation in pace and tone. If you’re into rap. Stormzy’s ‘Vossi Bop’ is vibrant and punchy, with a nice hit of bass.

You can also tap into music streaming services’ wide variety of indie and alternative music. Black Francis’ vocals on Pixies’ ‘Debaser’ really stands out, while the guitar riff on ‘Seven Nation Army’ by The White Stripes sounds superb. Classical music is often great in the background at social events, and iconic tracks like Für Elise and Carmen sound great.

While the DiscovR is at its most effective at higher volumes, it is only once you approach maximum that distortion starts to become an issue.

On the vocal side, podcasts and radio sound excellent on the DiscovR. Voices have superb clarity, while there is a depth that you just can’t get with budget speakers.

It’s particularly effective with audiobooks, with the Audible functionality coming into its own to provide deep and atmospheric storytelling. This is obviously dependent on the delivery from the narrator, but you can rely on the DiscovR to be highly accurate in its reproduction of voice.

Something we would liked to have seen is more granular volume control direct from the device. ‘Volume 1’ is still relatively loud, and it’s difficult to set the low volumes using the touch panel. It became annoying to dive into the app to keep adjusting the slider, so we wouldn’t recommend using it at your bedside. 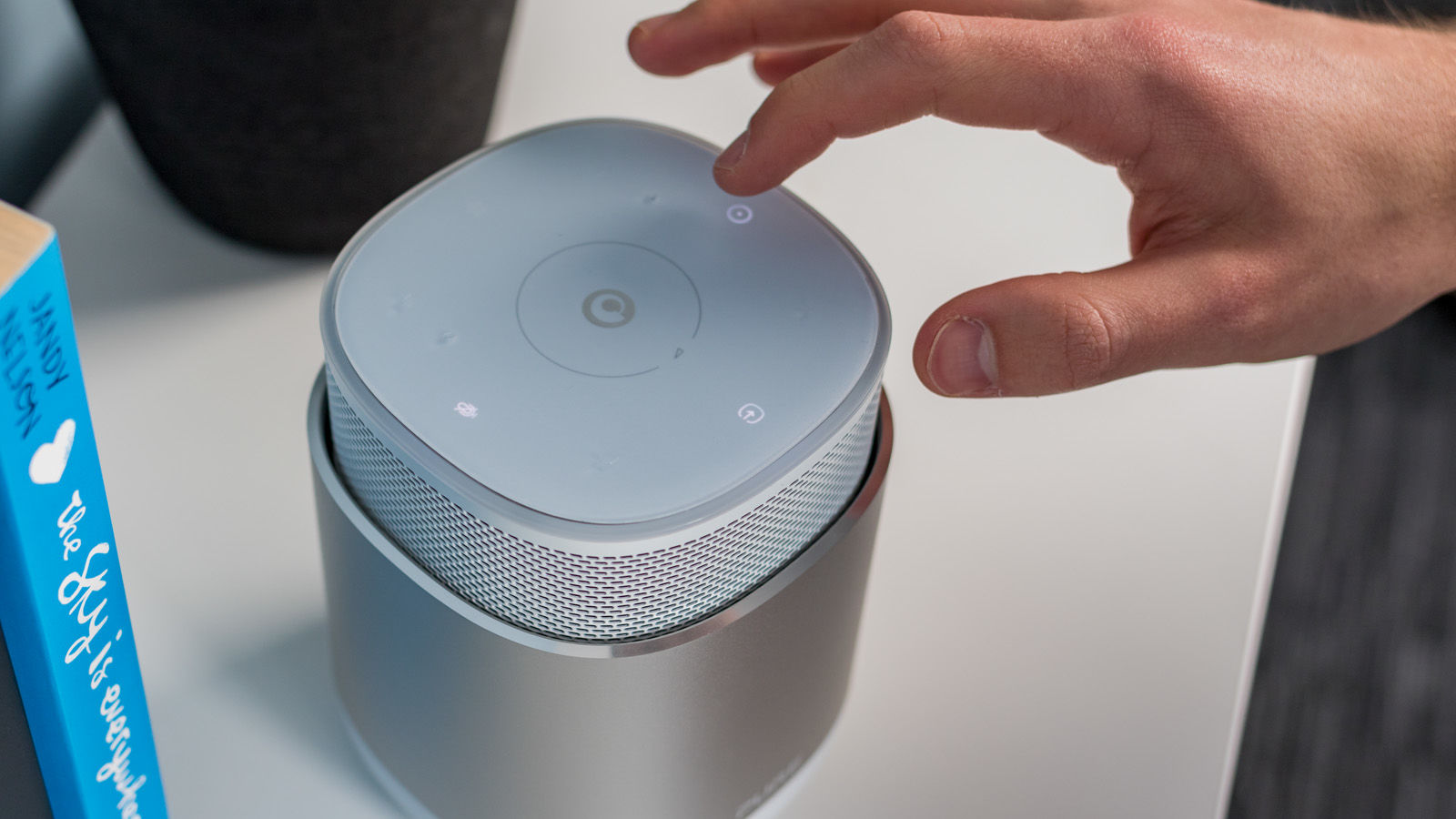 The setup process for the DiscovR is a little laborious – you have to download the Pure DiscovR app ( Android/ iOS) to set up the device and then Pure Home to register it to your Amazon account.

Both these apps are very simplistic, offering little functionality beyond checking what’s playing on your devices and adjusting volume. It also had trouble recognising the device when setting up through an Android phone – we had to switch to an iOS device to complete setup, although these issues have occurred across other Alexa speakers.

The beauty of the DiscovR lies in its flexibility – you can choose Bluetooth, Alexa or AUX mode depending on the situation you’re in. Each mode can be activated by tapping the dedicated button on the top of the device. All these touch buttons are only illuminated when they sense you are nearby, meaning they soon blend into the device when not in use.

This makes it a perfect party speaker, particularly considering it is portable too. On Amazon Echo devices, wireless functionality is only available through a third-party accessory, which often adds significant bulk to the device.

However, at 971g, this remains a relatively heavy device, something you’ll be happy to move between rooms but less likely to throw in a bag for travel.

As well as sounding futuristic, the DiscovR lends its name to one of the headlining features, Music Discovery. This allows you to add whichever song you are listening to to a Spotify playlist at the touch of a button, provided you link the device to an active account (free or premium).

We found this feature particularly useful, particularly as radio DJs often don’t announce what song was just playing. We hope it can also be added to Amazon Music in the future.

Another unique feature is Quick Corners, which allows you to launch an Alexa command just by tapping one of the right angle icons on the top of the device. For example, if you regularly listen to a particular radio station or launch a specific playlist, you can set a command for the DiscovR to trigger that action.

This scale of on-device customisation is not something we have seen on any other smart speaker. While impressive in its own right, it often has to compensate for the slightly sub-par microphone performance.

Despite Pure claiming it has a ‘far-field microphone array’, we often had to say the wake word a number of times before it recognised us, and it frequently misheard even simple commands.The microphones would be more comparable to the Echo Dot than any of Amazon’s more premium speakers.

Pure claims 15 hours of battery life on a single charge, which appears pretty accurate from testing. Note this is not 15 hours of continuous playback, more intermittent stop/start audio.

Even when battery is low, the USB-C port supports fast charging. While this is nothing like the crazy speeds on modern smartphones, 2500mAh cell still gets juiced up relatively quickly.

The Pure DiscovR is a highly accomplished entry into the smart speaker world. It nails the fundamentals, with excellent audio across the board, good integration of the virtual assistant and great flexibility – all with an eye on user privacy.

The unique features are exciting, but only to a particular kind of person, and the setup process can be a bit of a pain. But if you can look beyond the price, this is an excellent option that offers something different to many of the best smart speakers.