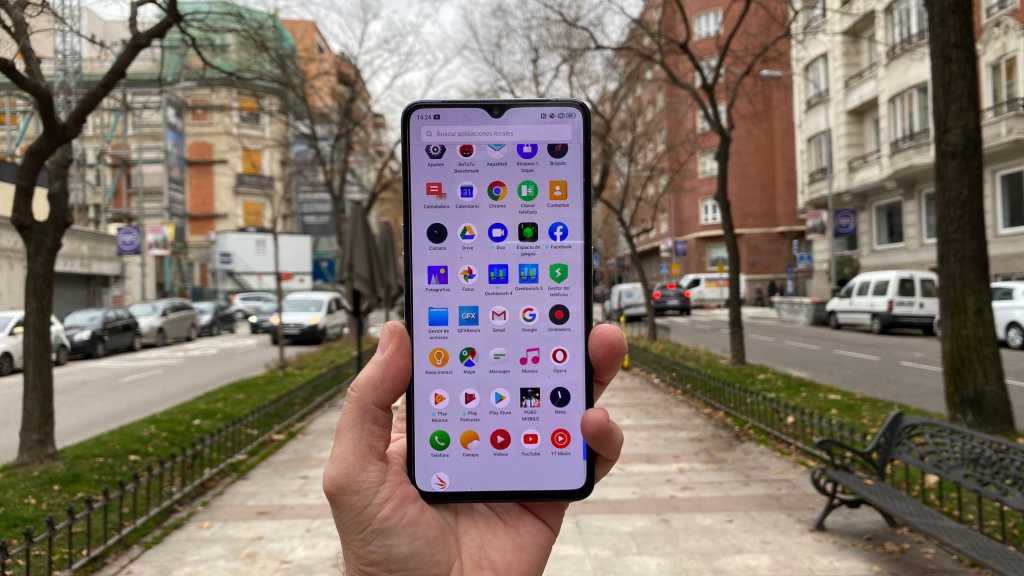 Although it may sound cliché, Realme is trying to redefine the mid-range phone market with the X2 Pro, offering an unprecedented level of performance that will only be surpassed by much more expensive handsets. We especially like the variety of models and configurations to choose from, something which means you can get a 90Hz screen for under £400. For this and many other reasons which are outlined below, this phone is easy to recommend.

Although the initial lineup of Realme phones in Europe is somewhat limited (they can be counted on the fingers of one hand), the brand’s reputation and popularity has grown relatively quickly.

The Realme X2 Pro is the company’s most expensive model, but it is still among the most competitively priced phones at under £400. Also check out the Realme X50 Pro 5G.

In return you get the latest Snapdragon 855+ processor from Qualcomm, which reaches a clock speed of 2.96 Ghz and so will be free from any performance issues whatsoever. Let’s run through the different models and pricing.

The Realme X2 Pro is aiming to be the brand’s flagship model, combining speed, power and performance whilst maintaining a design that you typically only find in premium smartphones.

Realme has positioned the X2 Pro at a very interesting price point, and it comes in two different finishes – Neptune Blue and Lunar White. We tested the latter, which is particularly striking as the tones changes as they reflect the light.

We like the fact that there’s a variety of configurations to choose from, with Realme allowing you to choose between three different combinations of RAM and storage.

Unfortunately, the only place we could find to buy the phone in the UK is Clove Technology, where you’ll pay £539.99 for the 8GB/128GB version. However, it might be worth importing from Spain, where you can pick it up the highest-specced model for just €449 on Amazon.

When you buy the phone, there are also additional discounts on some accessories, including two generations of wireless earbuds and a more robust cover to add to the one already in the box. Head to the Realme website to see the full range.

Nonetheless, it faces strong competition from the best mid-range phones on the market.

During its unveiling in Madrid, which we had the opportunity to attend, the company compared the X2 Pro to the Samsung Galaxy Note 10 and Xiaomi’s Mi 9T Pro, specifically in the areas of photography, battery life, charging speeds and screen quality.

If you’d like, you can read our in-depth reviews of the Samsung Galaxy Note 10 and the Xiaomi Mi 9T Pro.

There are plenty of notable design choices with the X2 Pro. Aesthetically we can’t ignore the generous 6.5in screen, but this shouldn’t make the phone unmanageable for most people. However, at 199g it is among the heaviest phones of 2019.

It differs slightly from other Realme phones on the back, with the quad camera setup moved to the centre of the phone as opposed to one side. The four lenses are aligned in a vertical row, although the camera module does protrude slightly from the back of the device. This can easily be fixed by applying the included silicone case.

The phone is a notorious fingerprint magnet, although the effects less noticeable on the lunar white model. The screen also suffers from smudges, but they are only visible when the screen is off. There is a teardrop notch here to house the 16Mp selfie camera, alongside an in-screen fingerprint scanner.

The glass back blends seamlessly into the curved edges of the device, which help with gripping the device when case-free.

It’s worth mentioning here that we were pleasantly surprised by the responsiveness of the device, as well as its strong performance in benchmark tests.

At 6.5in, the X2 Pro adds just 0.1 in to the screen size of the regular X2, coming in with a 2400×1080 OLED panel. However, the most surprising thing here is the 90Hz refresh rate, something which is very surprising to see on a phone at this price point. Realme has likely been inspired by its successful implementation on the OnePlus 7T and 7T Pro.

Additionally, a maximum brightness of 480 nits means that outdoor visibility should be fine, even in direct sunlight. This should also help people who suffer with chronic tiredness or eye conditions such as presbyopia, as it makes reading on the phone easier.

The higher refresh rate can be toggled in settings, and makes a surprising difference when playing intense games or certain videos. However, it’s worth remembering that the 20:9 aspect ratio will leave black bars at either end of regular video, which is produced in a 16:9 format.

There are also options in settings to activate a blue light filter to combat visual fatigue. This is in addition to changing font sizes and customising the display to suit your tastes.

In everyday usage, you will notice the fast and smooth performance throughout the user interface, and there’s no latency even when multitasking or playing graphic-intensive games. Having 12GB of RAM definitely helps in this regard.

In terms of performance, the X2 Pro comes with Qualcomm’s Snapdragon 855 Plus, its flagship processor for 2019. Combined with an Adreno 640 GPU, graphics performance is similarly impressive.

Qualcomm say this chipset is suitable for elite level gaming, so it should be able to compete with some of the best gaming phones on the market. The phone has some features perfect for mobile gaming, such as specific vibrations and excellent haptic feedback.

A HyperBoost feature allows you to maximise performance when necessary, perfect when you need extra output when gaming. You can even set individual parameters for each game.
This will have a significant impact on battery life, but is effective for short periods of time.

It offers a number of other useful tools, including the ability to respond to messages without leaving the game and easy screen capture and recording tools at your fingertips.

The UFS 3.0 memory storage also ensures data transfer speeds are among the best out there.

This stellar performance is exemplified in the chart below, where it is compared to some similarly priced handsets. These even include major players like OnePlus and Google.

The four rear camera setup is headline by a primary 64Mp sensor. Raw files shot with this lens will be in a stunning 9280×6944 resolution, meaning you could print a 3.6m poster without losing resolution.

A second 13Mp telephoto lens provides 2x optical zoom, which can be extended to 20x with the help of software. We loved the UI in the camera app, which allowed us to quickly switch between modes at the touch of a button.

2x optical zoom is the standard so it’s nice to see that here, but we would recommend using the 20x hybrid zoom sparingly as sharpness can quickly be lost.

The third sensor, an 8Mp wide-angle, extended the field of view to 115 degrees, while the fourth and final time-of-flight (ToF) lens allows for greater depth measurements. As a result, sharpness is impressive both at the point of focus and the edges of the images.

Looking at the same image from above zoomed to 5x, the variation in brightness and colour information (known as noise) is much more noticeable.

In portrait mode, it’s nice to be able to choose how much background blur you want in your shots. You can choose anywhere between 0 and 100%, with it set to 60% by default.

There’s also some special modes available here, including Beauty, Nightscape and Chroma Boost. We were pretty impressed with the results, as they allow a lot of flexibility when shooting even before filters are applied.

Both the front and rear cameras feature electronic image stabilisation (EIS). While this is not quite as good as the industry-standard optical, it’s nice to have here. You can record video up to 4K at 60fps, which is an advantage over other mid-range phones such as Xiaomi’s Mi Note 10.

The X2 Pro supports slow motion up to 960fps, and you can even use the ultra-wide camera to achieve this effect. You can get some great shots as a result, particularly with an ultra-stable mode activated.

The aforementioned Nightscape mode is quite impressive, but it can’t compete with the dedicated low light modes on the likes of the iPhone 11 Pro or Google Pixel 4.

In order to compensate for the 90Hz display on the X2 Pro, Realme has included a large 4000mAh battery.

However, the more surprising thing here is the included Super VOOC Flash Charge, which supports an incredible 50W. This technology is known for its use in Oppo phones, where it has had great success.

The X2 Pro charged unlike anything we’ve seen before, reaching a full 100% in just 30 minutes. We can confidently say it’s the fastest charging we’ve ever tested on a phone, and should be a key factor in the decision over whether to purchase this phone.

What’s more, the X2 Pro includes a new heat dissipation process that allows it to cope with any significant temperature rises. A gel helps spread heat across the whole device, ensuring no one component will overheat as a result. This should help it cope with more intensive graphical processes, as well as the staggering new charging standard.

The battery itself lasted 8 hours and 37 minutes in our testing, meaning it should be able to comfortably exceed a day’s usage for most people. This is a similar result to the Redmi Note 8T, but significantly less than the incredible 13 hours and 13 minutes we recorded on the Xiaomi Mi Note 10.

Among the new features on ColorOS 6.1, the greater energy efficiency on the handset stands out, as well as an intelligent assistant that can access internal storage and take advantage of augmented reality (AR).

ColorOS also has better optimisation for bezel-less screens, with easy access to the most popular functions and an improved notification bar that can be customised, depending on the style of display cut-out.

The aforementioned Hyper Boost allows you to easily switch between high performance and power-saving modes as it adapts to your own usage patterns.

The game assistant mode allows you to simplify managing notifications and creates easy shortcuts to the most common functions while gaming.

The Oppo Reno 10x Zoom was one of the first phones to come with this new version of ColorOS 6, and you can read our review of that phone here for a more in-depth look at the new software.

The Realme X2 Pro has plenty of notable strengths, and the fact so many of premium features are being offered at this price point makes it easy to recommend.

We can’t think of any other phone which is offering a 90Hz display at this price point, not to mention the ultra-fast charge which will give you nearly 100% battery in the time it takes to have a shower or eat lunch.

It is worth mentioning some of the deficiencies with the X2 Pro, including the absence of an official IP rating for water and dust resistance, and no support for wireless charging. However, you can quickly forget about the latter when the wired charging is so impressive.

The quadruple rear camera system does not disappoint, producing photos with great sharpness and vivid colours that stand out. It has everything and more that most people are looking for in a phone, including great cameras, superb gaming performance and super-fast charging.

We are extremely satisfied with the end result, even if there is room for improvement in some aesthetic and design aspects. At 199g, we hope the next device is just a little more lightweight too.