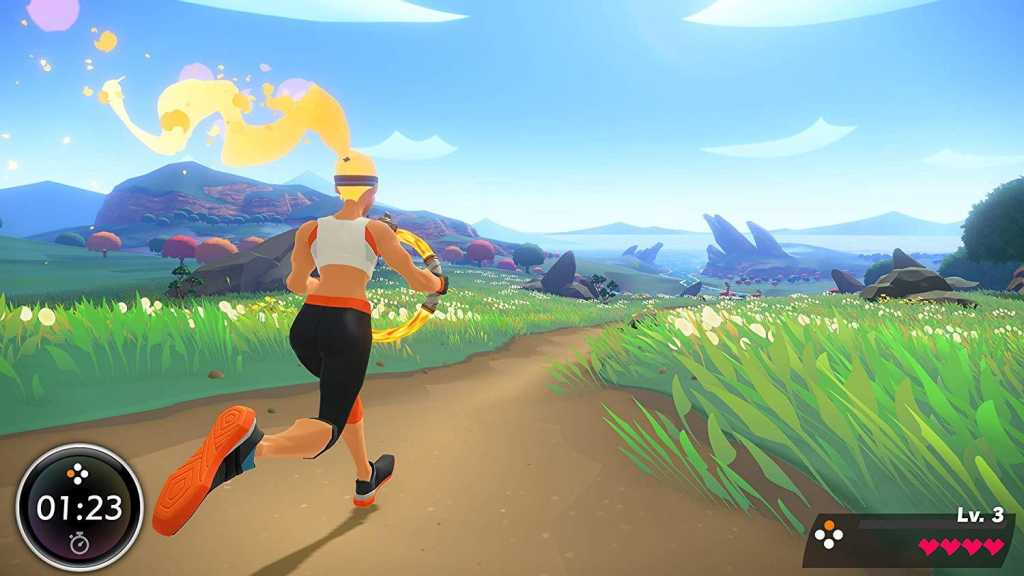 Ring Fit Adventure hits the sweet spot for an exercise title. There’s enough depth to the RPG elements to keep you coming back day-in, day-out, without ever becoming so inaccessibly deep as to put anyone who’s never touched Skyrim. More importantly, it actually delivers a proper workout. You can work at your own pace, but if you’re committed you can push yourself hard, and the Ring-Con offers enough resistance for proper upper body sessions. If you want to, you will sweat, and you will get sore, which is more than you can say for every exercise game out there.

Wii Fit was, it’s probably fair to say, a bit of a system seller. So the most surprising thing about Ring Fit Adventure isn’t that it exists, it’s that it took Nintendo so long to release it

Like that game before it, this sits somewhere in between a fitness sim and a full game, but unlike Wii Fit this skews much closer towards the game side of things – though don’t make the mistake of thinking that means you’ll get to sit around or take it easy.

In fact, there’s a surprisingly robust game here that’s also a phenomenal bit of exercise kit – enough to earn it a spot in our best Switch games chart, not least because it isn’t like anything else on the console. And if you don’t own a Switch yet but are tempted to pick one up, we’re rounding up all the latest Switch deals to help you get the best price possible. Or if you’re looking to get your brain in shape too, then check out our review of Dr Kawashima’s Brain Training for Nintendo Switch.

Out on Switch now for £69.99/ $79.99 (you can check out the best places to buy it here), the centrepiece of the game is another new accessory: the Ring-Con. Included in the price of the game, this circular resistance band connects to a Joy-Con and tracks about half the game’s exercises, with the remainder handled by a leg strap which attaches the other Joy-Con to your upper thigh. 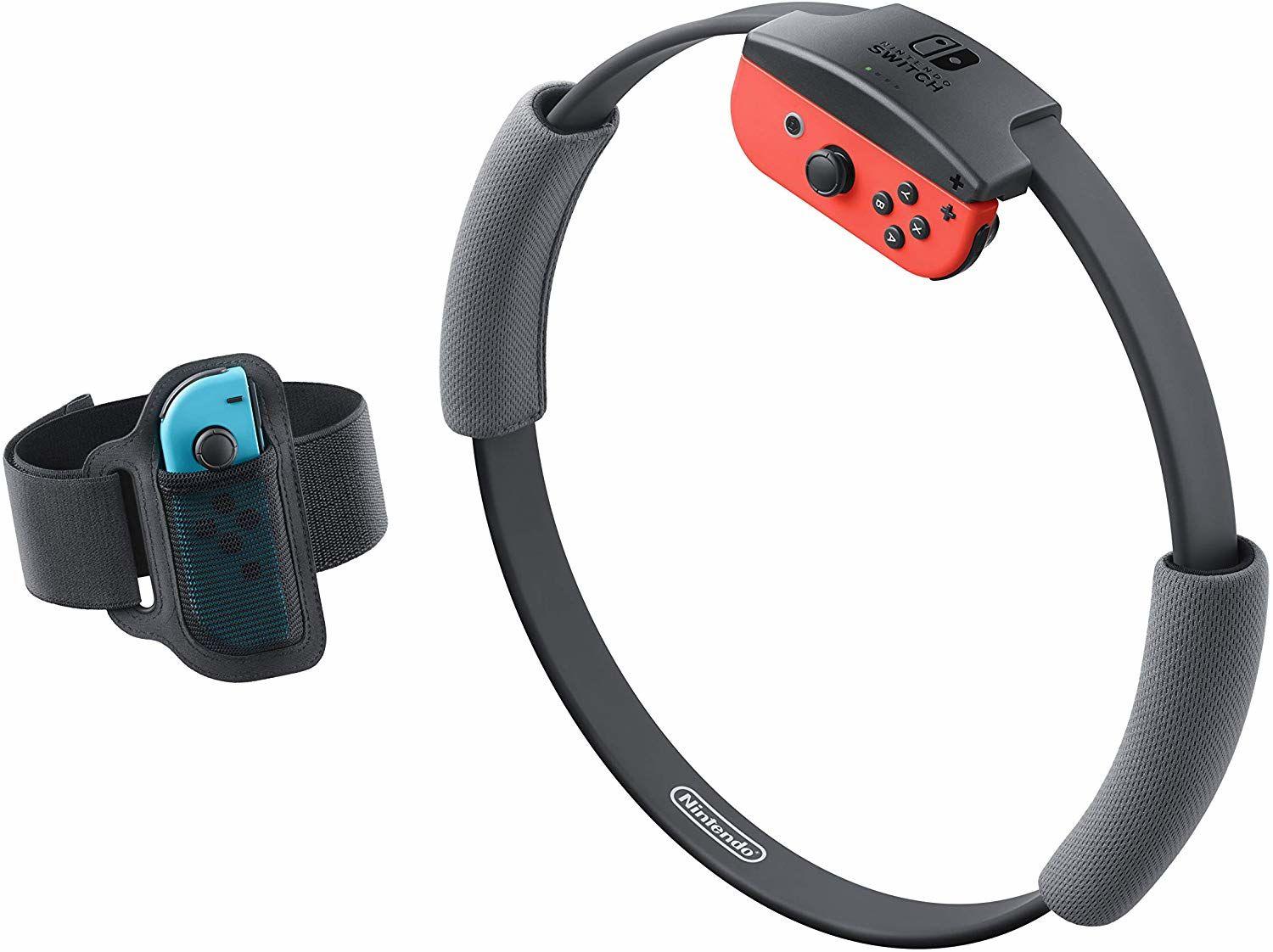 The strap is just a simple elastic-and-velcro affair (and one that has a bad habit of slipping down your leg if you wear any lycra-esque exercise gear), but the Ring-Con is a sturdier plastic construction, bolstered by foam palm grips on either side. It feels like it should take a beating – which it’ll have to – and actually offers a lot of resistance, so it will give your arms a fair workout.

The core of Ring Fit Adventure is, well, the adventure. Attached to a (very) thinly sketched story involving a confusingly buff body-building dragon, this mostly consists of an endless runner where you actually have to run through a variety of levels.

Jogging on the spot moves you forward, while squeezing the Ring-Con fires an energy blast to destroy obstacles, and pulling it apart triggers a vacuum to attract coins and other collectibles. You point it down to jump, and between all that can basically navigate every level. 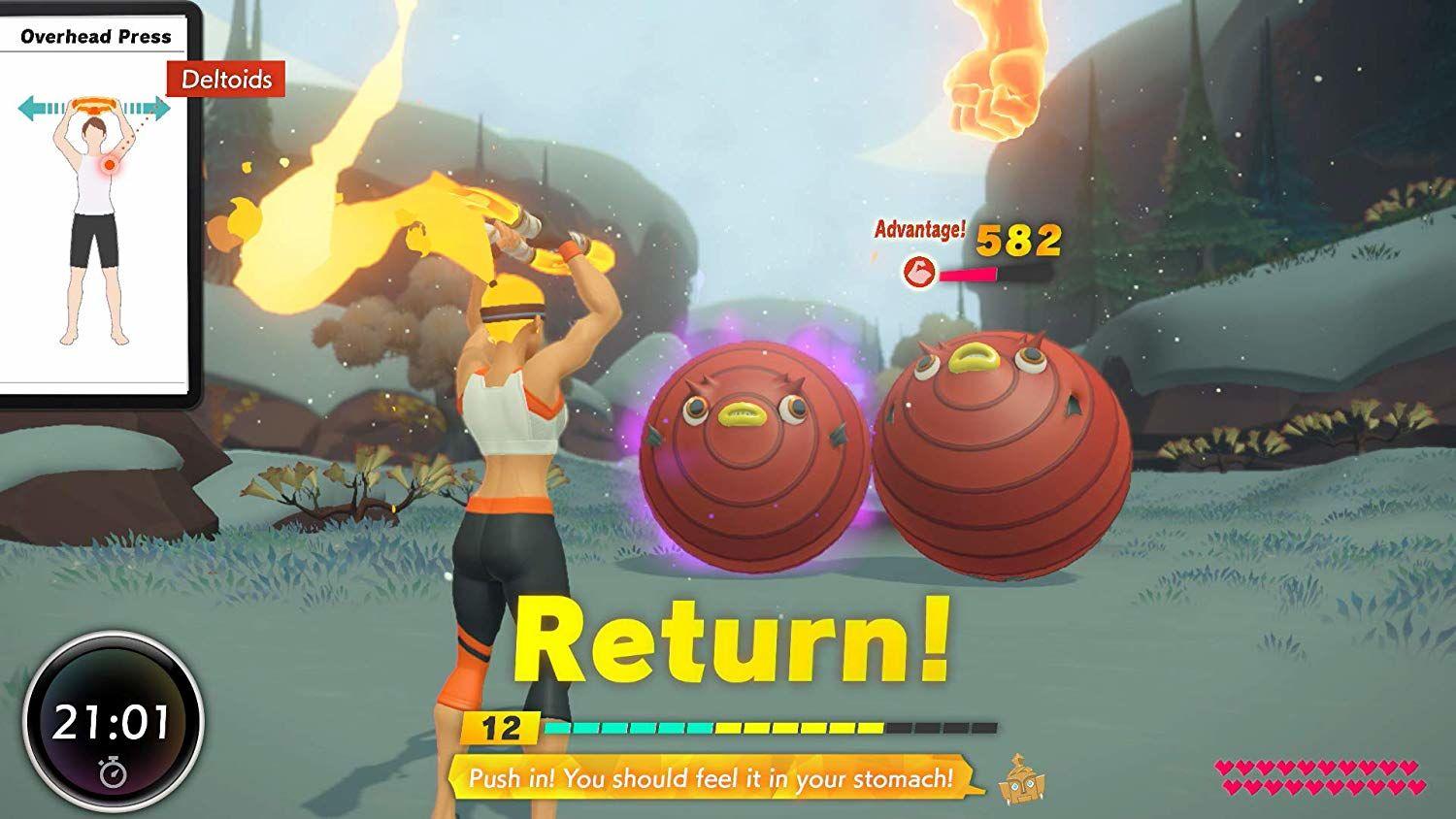 Where the game gets a little more interesting is when you hit enemies. They pop up every now and then, triggering a fit battle. Yup.

You essentially get to pick your exercise – early ones included squats and leg extensions, but more unlock as you progress – and do a set of reps, dealing more or less damage based on how good your form is. You rattle through a few different exercises to deal damage, squeeze the Ring-Con into your stomach to block, and after a while you’ll be back to jogging along.

There’s a bit more depth to the combat than that though. Different exercises deal different amounts of damage, and some will target single enemies while others can hit more than one at a time. Moves are also categories by colour into four types – red for upper body, yellow for core, blue for lower body, and green for yoga moves – and once you hit World 3 you’ll unlock the ability to deal extra damage by hitting an enemy with an attack of the corresponding colour. 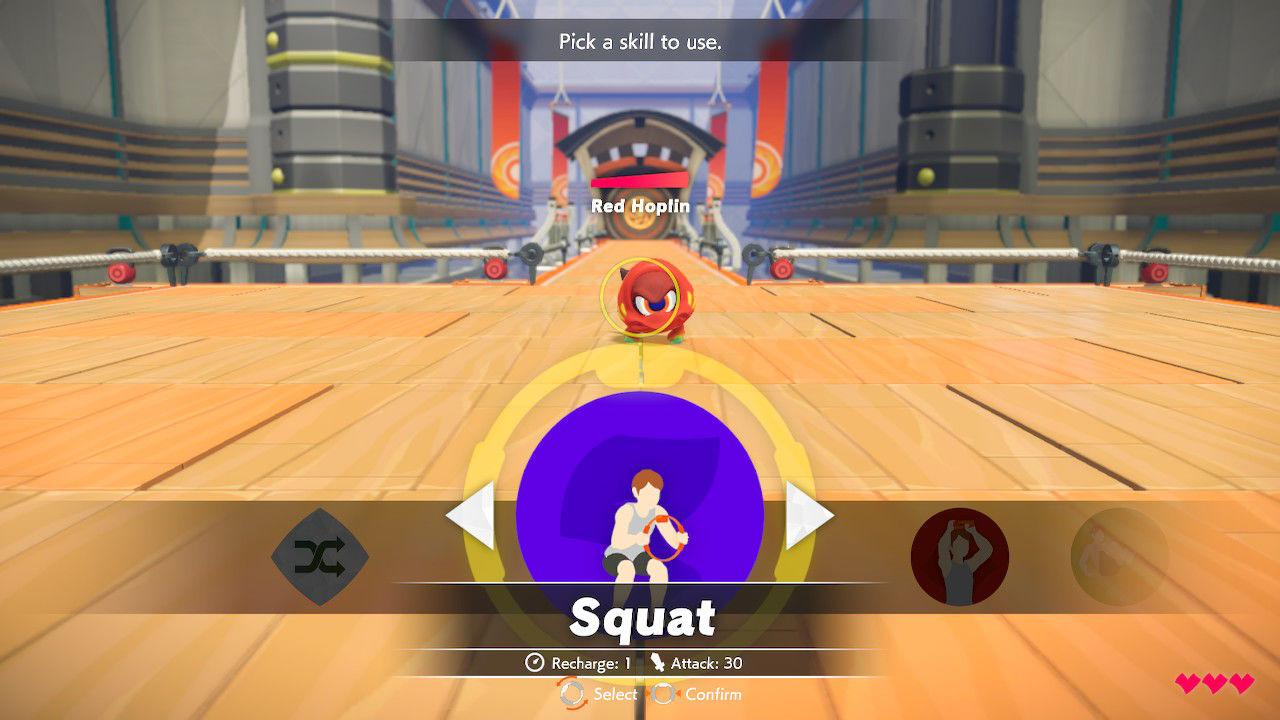 Don’t get me wrong, it’s not a super robust combat system. But it adds just enough complexity that you’ll have to think about more than just your next rep at any given time. Throw in the fact that you can only have six exercises in your repertoire at any given time (at least until you unlock the skill tree, which took me about two weeks of solid play) and you’ll have to be a little tactical about which attacks you have at the ready, really encouraging you to mix up your workout rather than settle on the same one or two every time.

It’s simple, sure. But that’s hardly a fault – this is a workout first and foremost, but one with just enough going on to distract you from the exercise. And it is a workout – speaking as somewhat who’s not quite Chris Evans but does go to the gym a few times a week, I was surprised by how quickly and reliably Ring Fit Adventure worked up a sweat, even over shorter sessions. And since it lets you tweak the intensity every time you play, you can easily adjust it to how hard you want to push yourself each and every time.

There’s also an oh-so-Nintendo emphasis on form and safety. The game will encourage (but not require) you to stretch before and after each session, with the post-workout stretches even adapting based on which muscle groups you hit the hardest. Every exercise includes tips on technique and form, and the game will regularly remind you to drink water, and suggest stopping for a break if you’ve been working out for a while. 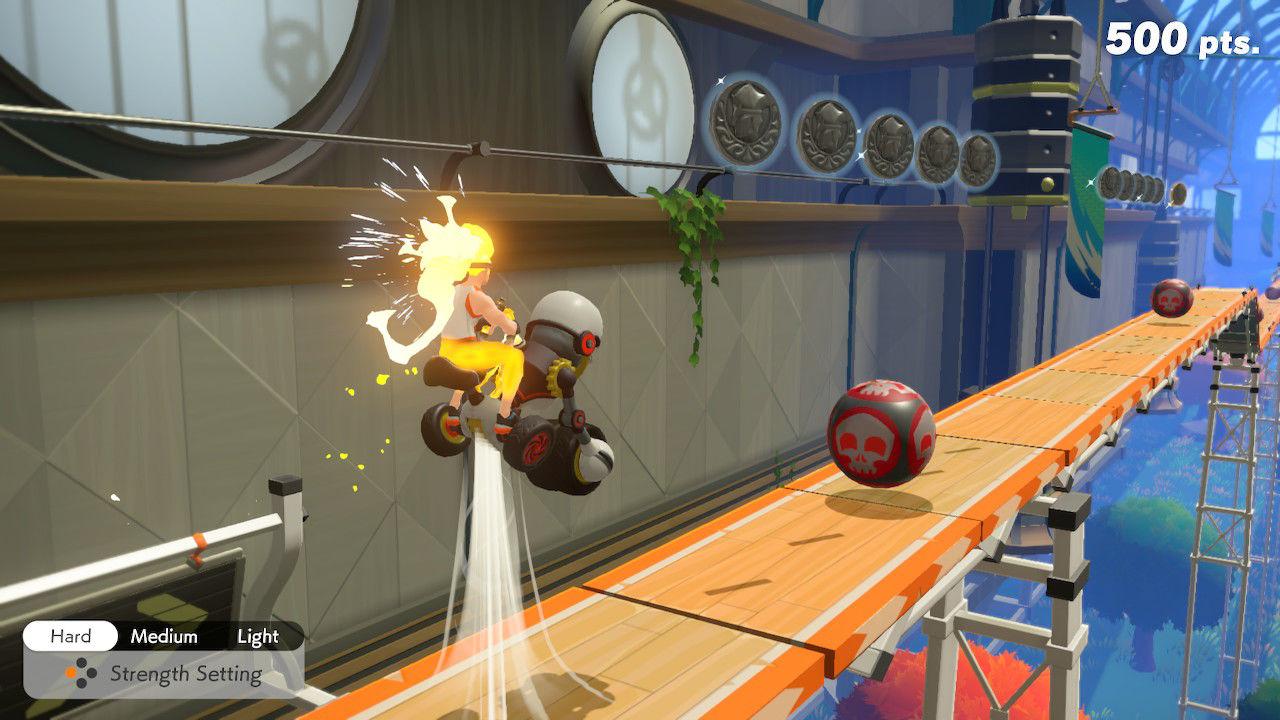 Still, for all it wants you to think about form, a lot of the game is still geared around distracting you from the fact that you’re exercising.

That’s actually a mindset best exemplified by the mini-games you can find dotted through the campaign, and accessible in a separate menu. Whether it’s squatting your way through everyone’s favourite Ghost scene in Squattery Pottery, balancing on a tightrope while dodging bombs, or using a fan to hit back discuses (discii?) thrown by inexplicably aggressive robots, these are geared around tiring you out while making you focus on something else – and giving you a high score to chase to boot.

The main game by contrast is structured more like an RPG, with a currency, XP, and level progression – focussed on using gamification to motivate you to keep coming back. There’s unlockable clothing (with stat boosts), various smoothie recipes to discover for healing and buffs, and a slew of worlds to work through as the light story progresses.

Normally when reviewing a game I’d binge it in an attempt to get through the full campaign, but please take it as a compliment to Ring Fit Adventure when I say that I couldn’t do that here: it’s physically demanding enough that an eight-hour binge was never an option.

Still, across the first five worlds (out of more than 20) I’ve seen a steady drip-feed of new enemy types, exercise, environments, and mechanics, and there’s every indication that will keep rewarding play for a while – enough to keep people working through the main adventure for at least a few weeks if playing once a day or so – Nintendo reckons it would take at least 45 sessions of half an hour each, which sounds about right. I’m not sure about replayability beyond the end of the adventure however. 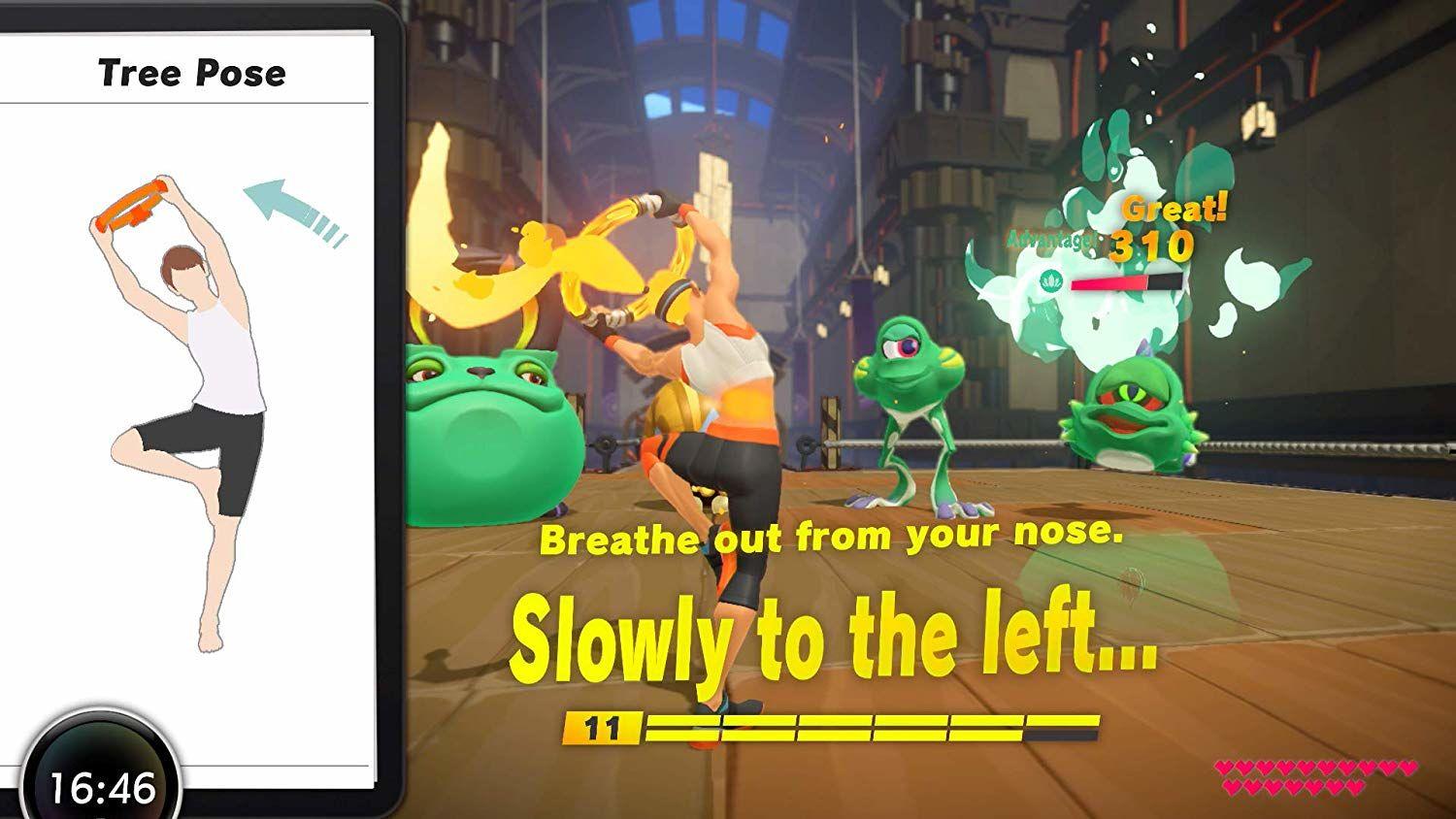 There are other thoughtful touches to keep the game a part of your life though. You can set alarms within the app to remind you to play, which will set your Joy-Con off vibrating and beeping when it’s time for a workout. Better still, if you press in on the Ring-Con joystick while the console is asleep, it will begin tracking any pushes or pulls you make on the Ring-Con, and will reward you with extra XP the next time you load the game up – an ideal way to encourage idly working out while you watch TV.

To go with all the gamification Nintendo has also given Ring Fit Adventure a jolt more personality than Wii Fit ever had, but Splatoon or Arms this ain’t.

There’s a faintly Dragon Ball-inspired aesthetic to the main adventure – ripped dragons, glowing hair, you know – but isn’t a setting I expect to inspire an ardent fanbase. Still, the environmental backgrounds are definitely more beautiful than they strictly need to be, with a subtle cel-shaded effect that’s reminiscent of Breath of the Wild, and the cutesy gym equipment-themed critters you’ll be trying to out-exercise are sure to pick up a few fans.

Ring Fit Adventure hits the sweet spot for an exercise title. There’s enough depth to the RPG elements to keep you coming back day-in, day-out, without ever becoming so inaccessibly deep as to put anyone who’s never touched Skyrim.

More importantly, it actually delivers a proper workout. You can work at your own pace, but if you’re committed you can push yourself hard, and the Ring-Con offers enough resistance for proper upper body sessions. If you want to, you will sweat, and you will get sore, which is more than you can say for every exercise game out there.

Ring Fit Adventure is a measurable step forward from Wii Fit, with enough complexity, depth, and progression to keep players coming back and hopefully save the Ring-Con from dusty relegation to the back of the cupboard – at least for a few months.