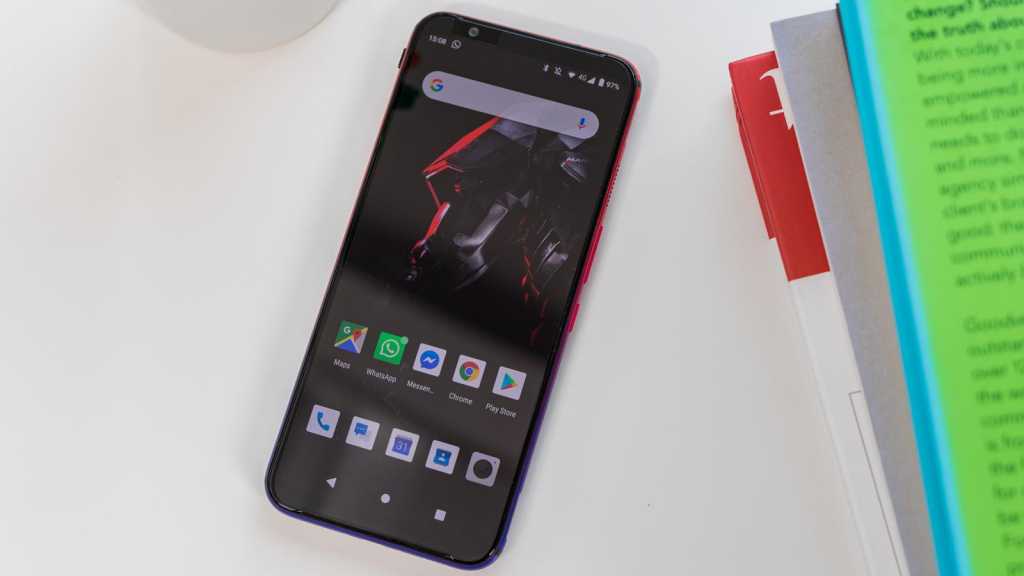 The Red Magic 3S builds on the success of its predecessor to provide an almost complete mobile gaming experience. If this is your first foray into the world of gaming phones, the high refresh rate display, front-facing stereo speakers and dedicated gaming mode are a delight to use. However, we’re disappointed with the lack of serious upgrades from the 3, particularly in retaining its chunky bezels and sub-par cameras. The 3S has ultimately fallen victim to Red Magic’s very aggressive update cycle.

The Red Magic 3 is the third gaming phone to be released by parent company Nubia in less than 12 months, as it continues its expansion into the European markets.

Hot on the heels of May’s Red Magic 3, the 3S offers the minor improvements typical of an ‘S’ update, while maintaining everything that made its predecessor such a success.

The Red Magic 3S was released in Nubia’s native China on September 9, but we had to wait until 16 October for a global release.

At launch the Mecha Silver and Cyber Shade were the only options available, but the Eclipse Black variant joined the lineup from 22 November.

That would put it on the more affordable side of dedicated gaming handsets, significantly undercutting the Asus ROG Phone 2 and Razer Phone 2, which start at £899/US$899 and £779/US$799 respectively.

The 3S is instantly recognisable if you’ve seen the Red Magic 3, with the same 6.65in, 2340x1080p AMOLED display as its predecessor. Make no mistake, this is a big device, but if you’ve tried some of the latest phones from Apple or Samsung it shouldn’t be a problem.

The display itself, although not the highest resolution, is more than adequate for a mid-range handset and provides plenty of detail while gaming. However, we only recorded a maximum brightness of 294 nits, and had a difficult time using it in direct sunlight.

What’s more disappointing, however, is that the slightly dated front of the phone is unchanged.

The sizeable forehead and chin on the device do accommodate a fantastic set of front-facing stereo speakers, but there are still large black bars housing nothing more than a 16Mp selfie camera and LED notification light. The 3S also comes pre-installed with a screen protector, and there seems to be no safe way to remove it.

The rear of the device retains the futuristic design of the 3, which is only amplified by the Cyber Shade option we tested. This is the only option if you’re looking for a 12GB/256GB version, so if you’d prefer the Eclipse Black or Mecha Silver variants you’ll have to be content with 8GB/128GB.

This is further enhanced by the RGB light strip, which Nubia say can be customised with multiple lighting effects and 16.8 million colour options. Unfortunately, we’re still waiting for additional functionality with music, notifications or incoming phone calls, so currently it’s a nice feature to have without being something that should influence your buying decision.

The fingerprint scanner and camera module are in keeping with the rest of the phone, but the positioning of the latter means there is a significant wobble when on a table.

The other design choices of note are on the sides of the device. As so many manufacturers are moving away from the 3.5mm headphone jack, Red Magic’s decision to retain it will likely prove very popular.

The contact points on the left side are designed for use with the Magic Adapter, which adds an Ethernet port alongside additional USB-C and 3.5mm jack sockets. This is primarily to ensure that your hands are not obstructed during long gaming sessions.

Above this, there is the dedicated Game Space switch, while on the other side are the now-familiar shoulder triggers and a fan grille, part of what Nubia claims is its ‘redesigned cooling system’.

Despite weighing 215g, it fits comfortably in the hand, meaning long gaming sessions on-the-go shouldn’t be a problem.

It is a golden era for fans of mobile gaming, with a number of dedicated handsets aiming to take advantage of the huge range of games available on the Google Play store.

Nubia has added a number of features to the 3S with the gamer in mind, the most notable of which being a 90Hz refresh rate. Combined with the the latest Snapdragon 855+ processor, it is a joy to use, with buttery smooth graphics and superb responsiveness throughout the UI.

You can see the benefits of the increased refresh rate throughout the phone, particularly in apps with a lot of dynamic multimedia content, but you also get a significant boost when playing graphic-intensive games.

Combined with an Adreno 640 GPU and 8 or 12 GB of RAM, this phone should be able to handle anything you throw at it. However, with the exception of the Snapdragon 855+, all these internals were present in the 3, making you question the validity of a new release.

There is a clear performance boost, as can be seen from the benchmarks below, but you’re unlikely to notice any real-world enhancements. For reference, we tested the more expensive 12GB/256GB model.

The internals work in tandem with version 2.1 of Red Magic’s Game Space, a dedicated mode aimed at enhancing your gaming experience and minimising distractions.

Activated via a physical switch reminiscent of an alert slider, here you can dial up the CPU and activate a 4D shock mode, as well as capture your gameplay to share with others.

If the device does get hot, you can manually enable the fan, but even at its maximum it should not interfere too much with your gaming experience. Nubia claims the Red Magic 3S is capable of up to 18°C of cooling, and with this new system we can see how.

We tested a selection of what we believe to be the  best Android games of all time, and the Red Magic 3S blazed through them all without a hitch.

PUBG Mobile was a joy to play, with a high frame rate and smooth transitions maintained throughout. This was particularly enjoyable when using the shoulder triggers, which give you satisfying haptic feedback when navigating the open world. As most of your rivals will be playing on a regular smartphone, this could give you a crucial advantage, particularly in Battle Royale games where every move counts.

Asphalt 9 is known to be one of the most graphic-intensive titles, yet it was just about as smooth and slick as possible. Progression-based arcade games, such as Jetpack Joyride and Crossy Road, felt just a little more special on the 90Hz display.

In addition to the aforementioned Magic Adapter, Red Magic offers a number of other accessories for the 3S. While earphones and a protective case seem pretty standard, the Pro Handle helps make it feel like a genuine handheld console. However, as each handle is sold separately, the full, dual-controller experience will set you back an additional £71.80/ $79.80.

A superb set of front-facing stereo speakers, complete with DTS:X support, guarantee an immersive media experience regardless of whether or not you choose to use headphones. The audio from the 3S is rich and full-bodied, with gaming sound effects unsurprisingly being its forte.

General performance with the 3S is predictably excellent, blazing through anything and everything we could throw at it. It can easily function as both a gaming device and a productivity powerhouse.

The 3S runs Nubia’s custom OS over Android 9 Pie out of the box. The company confirmed to us that a future update to Android 10 will be coming, but an availability date is yet to be revealed. .

The company’s skin is relatively light, with squared icons and its own SMS and gallery apps among the most noticeable changes. We’re disappointed that it lacks the Digital Wellbeing functionality that you can find on ‘stock’ versions Android, particularly with the chance of becoming immersed in long gaming sessions. You also lose the gesture-based navigation option, so you’ll have to stick with software buttons for now.

The face unlock is remarkably fast, rivalling OnePlus phones for pure speed. It does lack the security of something like Apple’s Face ID, but is a convenient alternative use of biometrics that works well.

It was our go-to method of unlocking the phone during testing, as the fingerprint scanner was a bit hit and miss. Despite being in a natural position on the rear of the device, its angular shape meant it often didn’t recognise our print at the first time of asking.

The Red Magic 3S makes sacrifices in an area so many mid-range phones do – the cameras. It features a single 48Mp, f/1.7 Sony rear sensor, complete with HDR, while on the front there’s a 16Mp selfie camera.

On paper these specs sound impressive, but as we know from the likes of Google’s Pixel devices, so much of the end result is determined by software.

In good lighting the Red Magic performs adequately, producing vibrant, punchy shots which are slightly lacking in dynamic range. It handles subjects particularly well, but tends to blow out the background. The camera’s performance in low light is enhanced greatly by a built-in night mode. This takes a few seconds to process, and shots are significantly brighter but with little improvement in detail.

The front-facing camera includes a beauty mode, but rather disappointingly this is set to 2/10 by default. One of the first things we did was turn this off, and in our samples the subject is in good detail yet the background is incredibly overexposed.

Check out the rest of samples below, which you may have to click on to open in a new window.

The rear camera also supports video recording up to 8k. This does drop the frame rate down to 15fps, and remains in beta at the time of writing.

However, in regular use the lack of any image stabilisation means handheld videos from the 3S are disappointingly shaky.

Battery life is an area where the phone excels, with the 5000mAh cell recording an impressive 10 hours and 7 minutes In Geekbench 4’s battery test. The battery regularly lasted us at least a day and a half, and this often included some pretty intense games testing.

The phone is also capable of fast charging, thanks to the included 18W adapter. While this is unable to rival the likes of OnePlus’s warp charge, we were able to get a respectable 35% battery in just 30 minutes.

As so many flagship smartphones pursue a bezel-less design, the Red Magic 3S unapologetically compromises on screen-to-body ratio to provide an immersive gaming experience.

While it should be judged on this first and foremost, the fact is that smartphones in 2019 are expected to be adept at pretty much everything.

The cameras, software and design of the 3S have all seen very few design changes from the previous model, so it’s a tough sell unless you’re looking for a capable gaming phone on a budget.