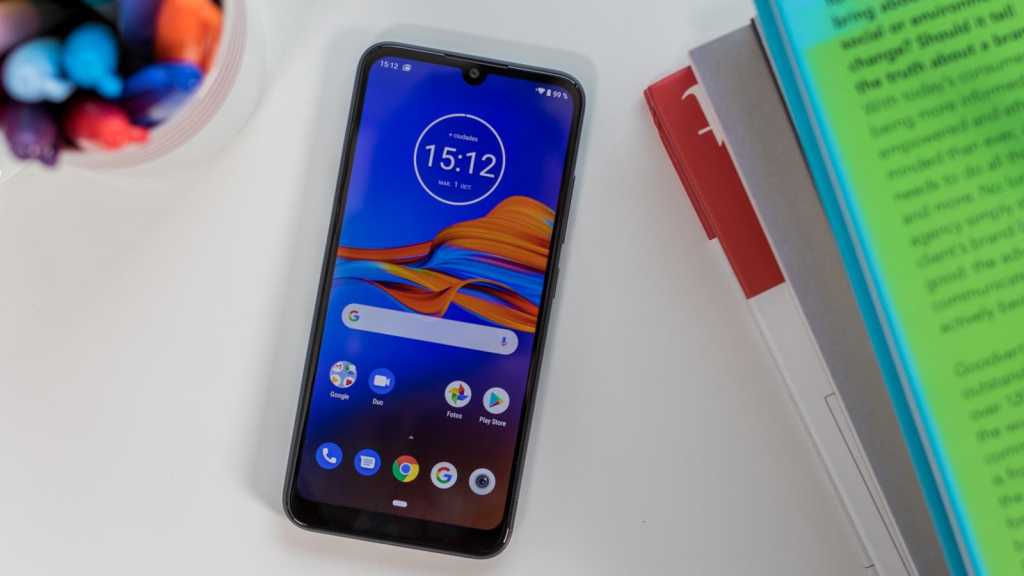 Motorola is once again offering an excellent budget smartphone for those looking for a cheap handset.  For under £100 outright, the Moto E6 Plus has a nice design, long battery life and a large screen. There is some compromise on cameras and processing power, though.

Back at IFA 2019 in Berlin, Motorola announced some new smartphones including the One Zoom with quad cameras. There was also the Moto E6 Plus for those looking for a budget handset.

What should have been a surprise was actually a simple confirmation of the device due to leaks leading up to the event. The information about the E6 Plus matched up to the final phone.

Nevertheless, we’re happy to see Motorola bring along another addition to the popular E-series of cheap smarphones. They satisfy those not wanting to spend much on a handset or simply don’t require the more advanced features of a flagship.

For less than £100, you get a smartphone with a nice deign and perfectly good specs.

As we’ve just mentioned, the Moto E6 Plus is firmly in the budget category of smartphones going by the price. At just £99 you can spend twice the amount on alternatives in the same market.

This is £50 cheaper than the Moto E5 Plus which is quite a price drop. You can buy it from Motorola or Amazon.

Check out what other affordable options are available in our best budget phone chart.

Budget smartphones have adapted very quickly to the trend of almost infinite screens.Although the chin and bezels of the E6 Plus are still thicker than you’ll find on more expensive models, the truth is that the Moto family has taken a fairly large step in design by finally removing the thick top notch to accommodate the selfie camera

Instead we find a U-shaped notch in the centre to house the front camera without having to steal excessive space from the screen.

The power and volume buttons are on the right side, while at the bottom we find the micro-USB port, a mono speaker and 3.5 mm headphone jack – something we love finding on cheaper phones with it all but exstinct on flagships.

The back is understandably plastic, but the crystallized effect gives a premium feel to the phone that does not look as cheap as the price suggests. It still attracts marks and fingerprints, but then the same is true of expensive phones likes the Huawei P30 Pro.

The circular module in which the rear cameras were housed on the E5 Plus has disappeared to give way to a configuration aligned vertically on the left side. Under the cameras is the LED flash and in the centre we see again the Motorola logo that serves as a fingerprint reader.

It should be noted how light the Moto E6 Plus feels when holding it in the hand, even when the battery is in. Here is it removable, which is highly unusual for a modern smartphone. <

The truth is that Motorola has managed to reduce the weight quite a bit in this device, since the E5 Plus weighed 197g, while the E6 Plus weighs just 149g.

You can buy the E6 Plus in four different colors: Polished Graphite, Bright Cherry, Right Cranberry or Caribbean Blue. Which ones are available depends which market you are in.

Overall, then, the Moto E6 Plus design doesn’t feel cheap at all. We like the premium look and feel which is on par with rivals like the Samsung Galaxy A10 or the Xiaomi Redmi 7.

Now we’ve covered the design and aesthetics of this budget Motorola phone, let’s focus on talking about the technical specifications – starting with the screen.

We are looking at an HD+ panel here (720 x 1560 pixels) with a diagonal size of 6.1in capable of getting closer to that infinite screen effect thanks to the U-shaped notch mentioned above. The aspect ratio this time is a tall 19.5:9 with a screen-to-body ratio of just over 80%.

The screen is a highlight of the phone thanks to its large size and also a decent brightness. Our test rates it at 334cd/m2 and when we used the Moto E6 Plus outdoors in sunlight the brightness makes it viewable.

It’s also impressive to find the panel is IPS LCD rather than a more basic option. This means you get good viewing angles when using the phone. We also find the colour to be vibrant and accurate.

If we take a look inside the Moto E6 Plus, we will find a low-end MediaTek Helio P22 processor, with eight cores and a maximum speed of 2GHz. There are two models when it comes to RAM and strorage but only the 2/32GB option appears to be available in the UK, not 4/64GB.

That’s not much memory or storage for a phone in 2019, but we’re looking at a device that costs under £100. Fortunately, there’s a microSD card slot to save the day, meaningn you can add up to 512GB more.

In our testing the performance of the E6 Plus has been good. Just note that this is a handset for basic functions, so don’t expect to be able to push it with anything too demanding.

When it comes to benchmark results, the phone fairs pretty well – especially when you see how big the jump is from the Moto E5 Plus. Almost double the score in Geekbench 4.

However, there are other budget phones with more performance available if you need it such as the Xiaomi Redmi Note 7. We’ve also compared it to the UMIDIGI One Pro and Huawei P Smart. The One Pro is more expensive but does come with things like wireless charging and NFC.

In our battery tests the Moto E6 Plus lasted 8 hours and 45 minutes with the screen on, a time that is quite good if we compare it with the premium OnePlus 7T (9 hours and 17 minutes) or the LG V50 (8 hours and 46 minutes).

As we have said, the battery tests are performed with the screen on, however, in our daily use with the phone we only had to charge the battery at bedtime (with average usage).

The 5W micro-USB charger took an hour to charge 28% of the battery, two hours to charge 60% and three and a half hours to charge 100%. This is a big drawback when compared to other phones which offer fast charging, including the Moto G7.

As mentioned earlier, it’s very unusual that the 3,000mAh battery is removable – although it used to be very normal for a smartphone. This means you can carry around a spare and swap it over if the battery dies.

As previously mentioned, the E6 Plushas a dual camera at the rear. The upper lens is the main 13Mp sensor with an aperture of f/2.0, while the second lens is actually a 2Mp depth sensor.

The camera software enhances the hardware by allowing different mode: panoramic, bokeh (or portrait effect with blurred background) and facial beauty. Forget the wide angle, macro, telephoto or night mode that we see in higher-end phones – those are not an option at this price.

In the gallery you can see the result of our camera tests with the E6 Plus and you can see that the results, although not bad, are not outstanding either. However, we need to keep in mind just how affordable this phone is.

The panoramic option allows you to capture landscapes or environments which don’t fit into the normal frame. In our tests we have obtained satisfactory results. The zoom is an aspect that disappoints, as you can see in the gallery photos lose sharpness and detail.

On the other hand, something that has impressed us a lot is the option to choose the degree of background blur to get those pictures with portrait or bokeh effect. This is typically not something you’d expect on a budget phone and the effect, although not perfect, has proved more accurate than we expected.

The beauty filter is available on both cameras. You can choose to smooth the skin to get that ‘perfect’ skin effect , although like so many it may be too perfect and unnatural if you choose the maximum. You can also choose the brightness and tone of the skin.

The camera app’s interface is quite simple. You will not find options like a pro mode, and the truth is that for a little more money you can get mid-range phones with better results, such as the Realme 3 Pro if you can afford it.

The front camera is 8Mp with f/2.0 aperture. You find options to use portrait effect with the blurred background, in addition to beauty filter. You can take a look at the results in our gallery. If you are interested in video, the quality is 720×1080, both in the front and rear cameras and its software supports snap video recording.

The Moto E6 Plus is another good purchase for users who have a tighter budget and are not very demanding in terms of specifications.

Taking into account the price of the smartphone, we can say that its performance and specifications are optimal, although you may also be interested in taking a look at some more expensive options such as Xiaomi or Huawei.

You get a lot for your money here including a large screen, good battery life and nice design. However, photography isn’t great and the core specs will be too limited for some. Luckily there is a microSD card slot for adding more storage.