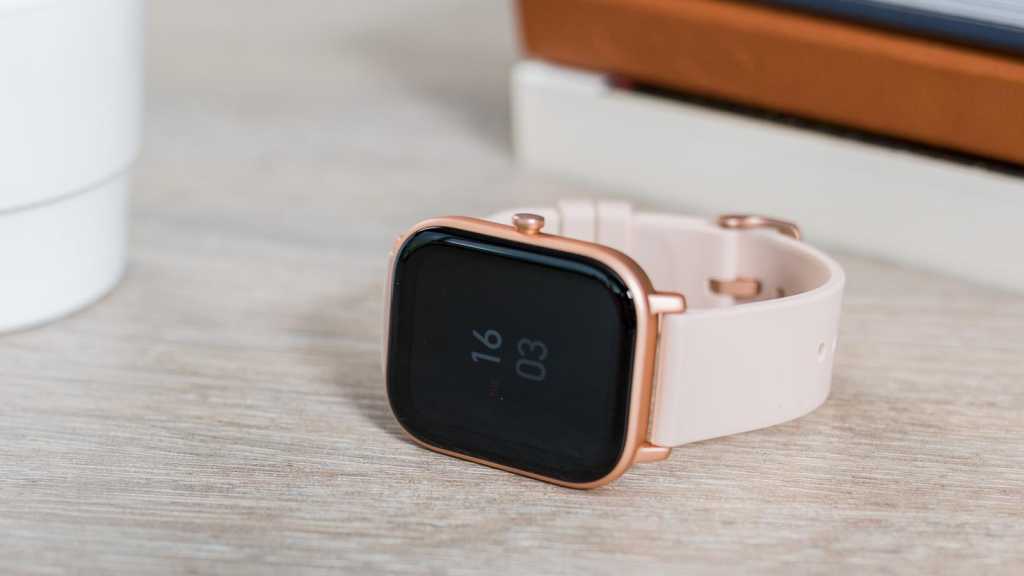 The Amazfit GTS offers a pretty comprehensive set of smartwatch features in a premium (if familiar) design but with a budget price point. It’s not the best watch at anything it does, though the one-month battery life is a serious selling point so long as you can resist the always-on display. But other than LTE connectivity the GTS has just about every feature you’d look for in a smartwatch, so long as you don’t mind putting up with a few app irritations.

If the Amazfit GTS looks familiar, that’s understandable: this is about the closest any watch manufacturer has gotten to imitating the Apple Watch. But while the GTS may be both cheap and Chinese, it’s no dodgy knockoff – this watch is the real deal.

Manufacturer Huami helps build Xiaomi’s fitness trackers, but over the last couple of years its build its own name thanks to its Amazfit smartwatch brand. The GTS is just one of nine watches the company currently sells, and arguably the most appealing yet – and not just because of that all-too-familiar aesthetic.

The Amazfit GTS is on sale right now, but if you’re in the UK or US you’ll have to import it from Gearbest.

We’re hoping it’ll come to Europe officially at some point soon – not least since the company announced a European price of €129 – but seemingly not yet. That’s not too much of a problem though, as the price from Gearbest is only slightly higher than Amazfit’s RRP. It’s £130/€145/$160 right now, though you will have to pay a little for shipping, and potentially extra for customs charges too. 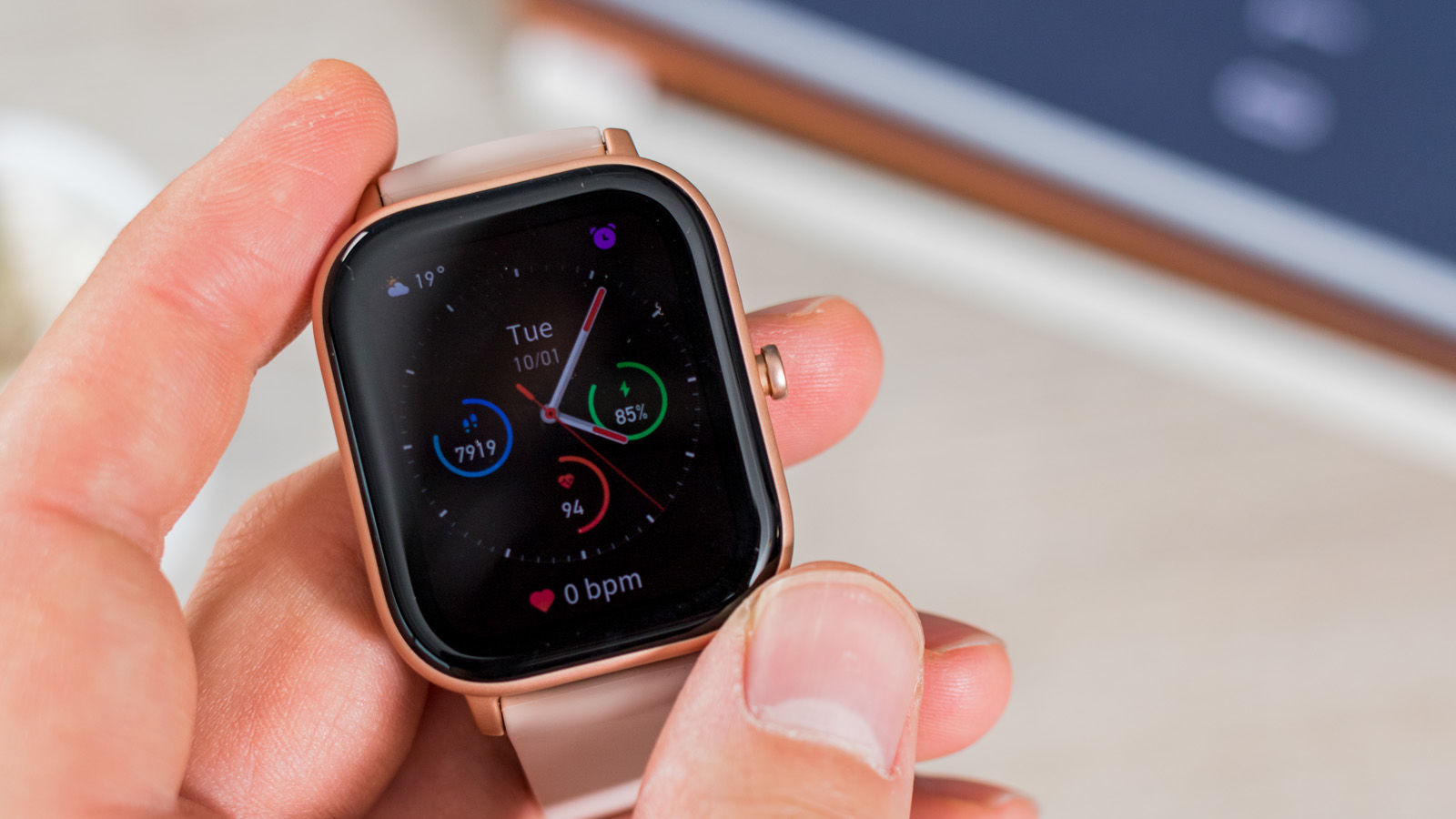 In terms of RRP the GTS comes in a little cheaper than the GTR, Amazfit’s closest comparison, which is €139 in its smaller size and €149 for the larger model, but that older watch (by a few months at least) does tend to run a little cheaper on Gearbest.

Either way, it’s fair to say that the GTS is an awful lot cheaper than the actual Apple Watch, which starts from £399/$399 for the Series 5. Things are complicated a little by the fact that the Series 3 is still available from Apple for just £199/$199, but that’s still almost double the price of GTS for a watch that’s two years older.

That said, Apple’s wrist pieces remain the best smartwatches around, and watchOS is comfortably ahead of most of its rivals. What does the Amazfit GTS have to offer to compete? 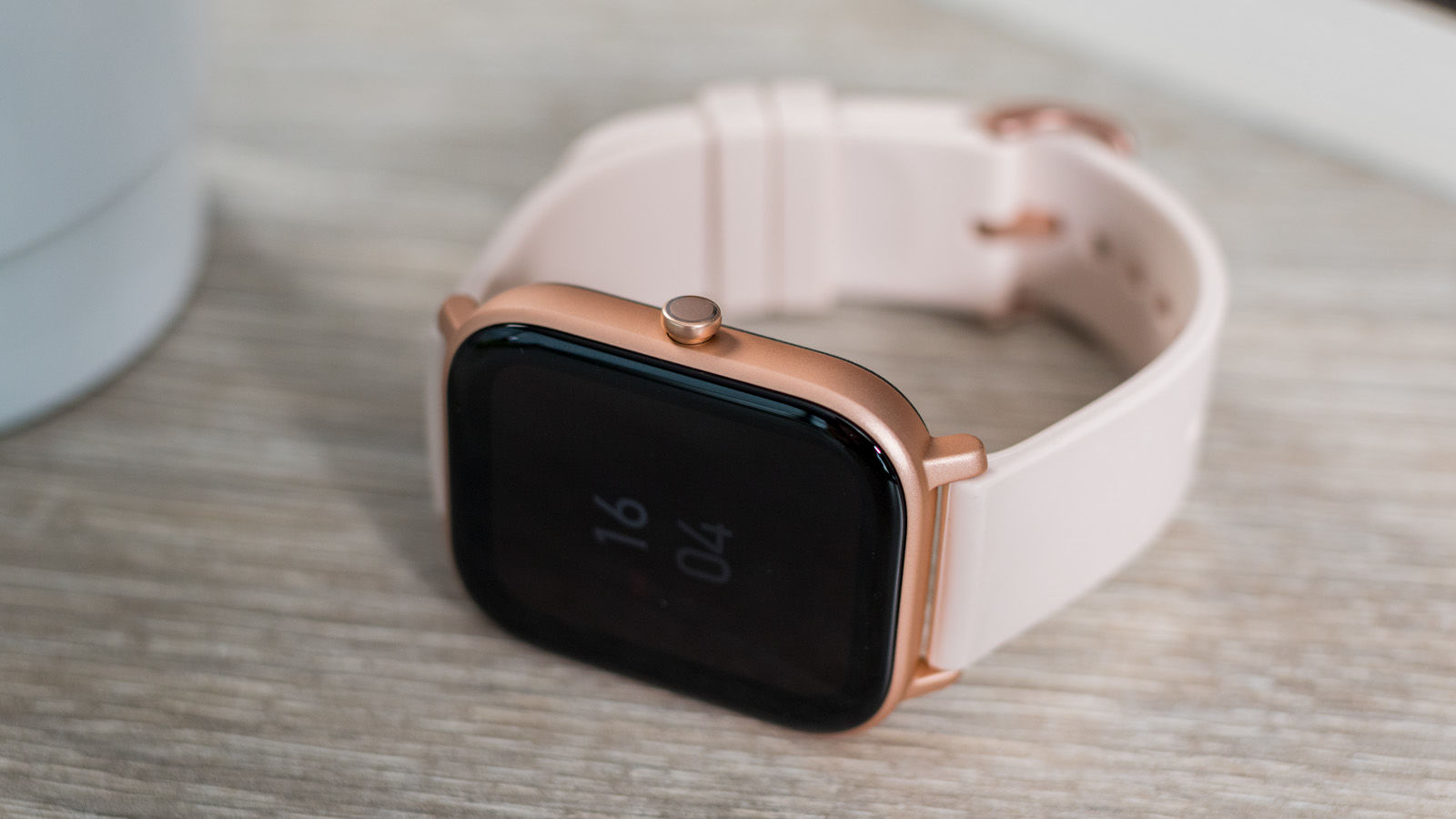 So yeah, let’s just get the design stuff out of the way because the Apple vibes are strong here. While most non-Apple smartwatches have opted for round faces – including Amazfit’s own GTR – the GTS not only goes with a squircle face, it goes for almost exactly the same squircle design as Apple’s.

The rectangular display is a 1.65in AMOLED with a resolution of 348×442 which works out at a pretty impressive pixel density of 340ppi. It’s a bright, colourful panel that’s easy to use even in bright light. And while there’s a chunky bezel around the edges, most of the OS uses black backgrounds anyway, so you’ll really only notice if you opt to switch to a more colourful watch face.

The main body of the watch is metal, with a matte polymer back that feels comfortable against the wrist, and Gorilla Glass 3 across the front for the sake of durability. The watch body is available in a choice of six colours with fancy names that basically boil down to pink, orange, black, blue, grey, and gold.

Each variant comes with a colourful silicone strap to match, but since the GTS uses standard 20mm watch bands it’s easy (and affordable) to swap this out for basically any other strap you’d like. 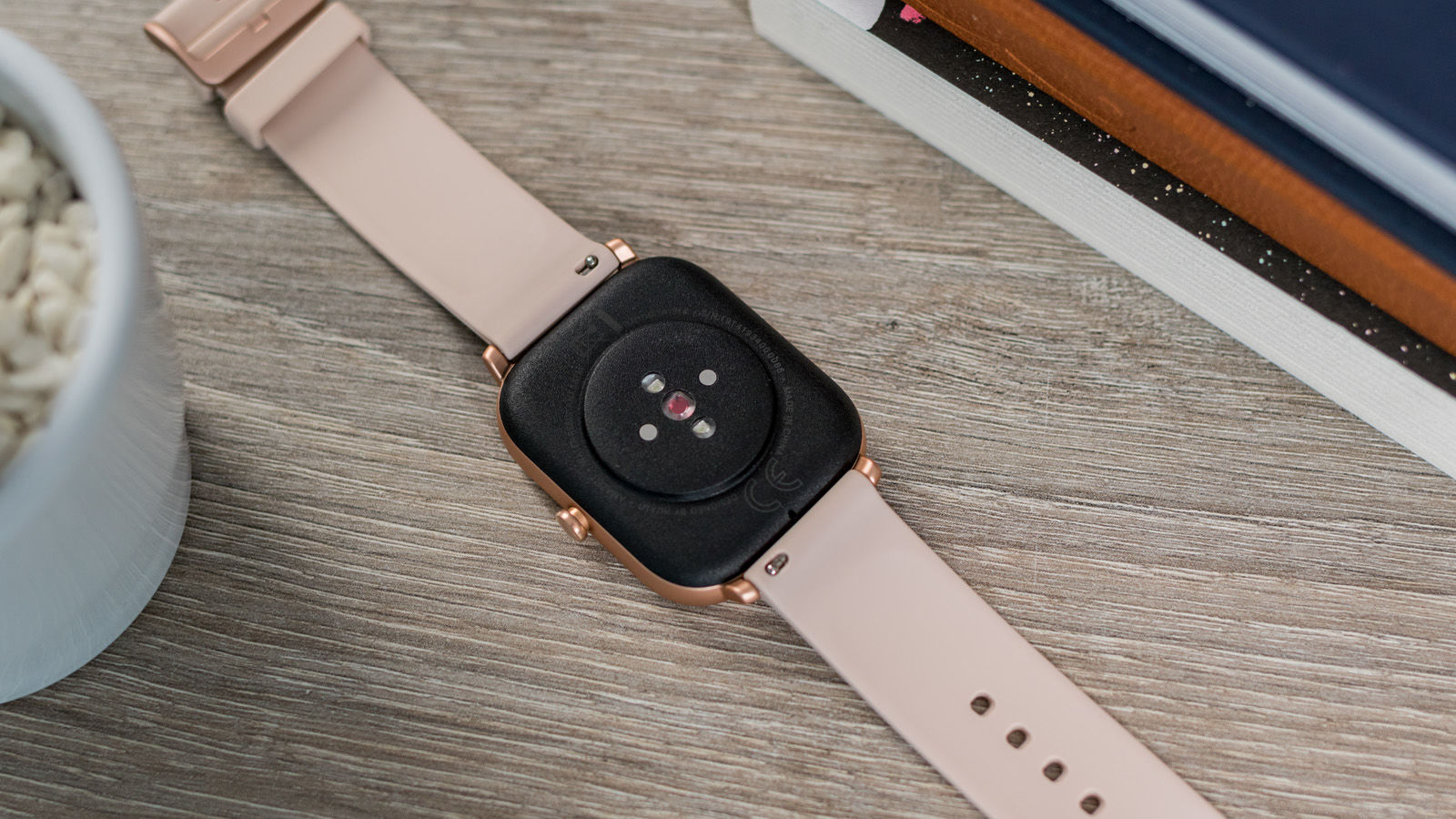 There’s only one button: the crown on the right side of the body, which rotates but not in any functional sense. It sits halfway down the watch, in one of the few design deviations from Cupertino, with a result that’s both more symmetrical and a little closer to a traditional watch design.

What’s perhaps most surprising given the price is that the build quality really holds up. The GTS lacks that ineffable polish you find on the best Apple products, but it feels sturdy and solid. There’s no sense that this is a cheap knock-off: it’s a well-built, attractive smartwatch that just happens to look an awful lot like another fairly famous one.

So the Amazfit GTS looks a lot like an Apple Watch. It also features the same core fitness tracking tech: step tracking, heart rate, built-in GPS, and built-in tracking for 12 workouts – including swimming, as both watches have 5ATM water-resistance.

Look past the similarities and the two watches quickly pull apart though. While the GTS lacks a couple of features you might miss from Apple’s devices – 4G LTE and ECG measurement are the two obvious ones – there’s actually a fair bit it does that Apple doesn’t. 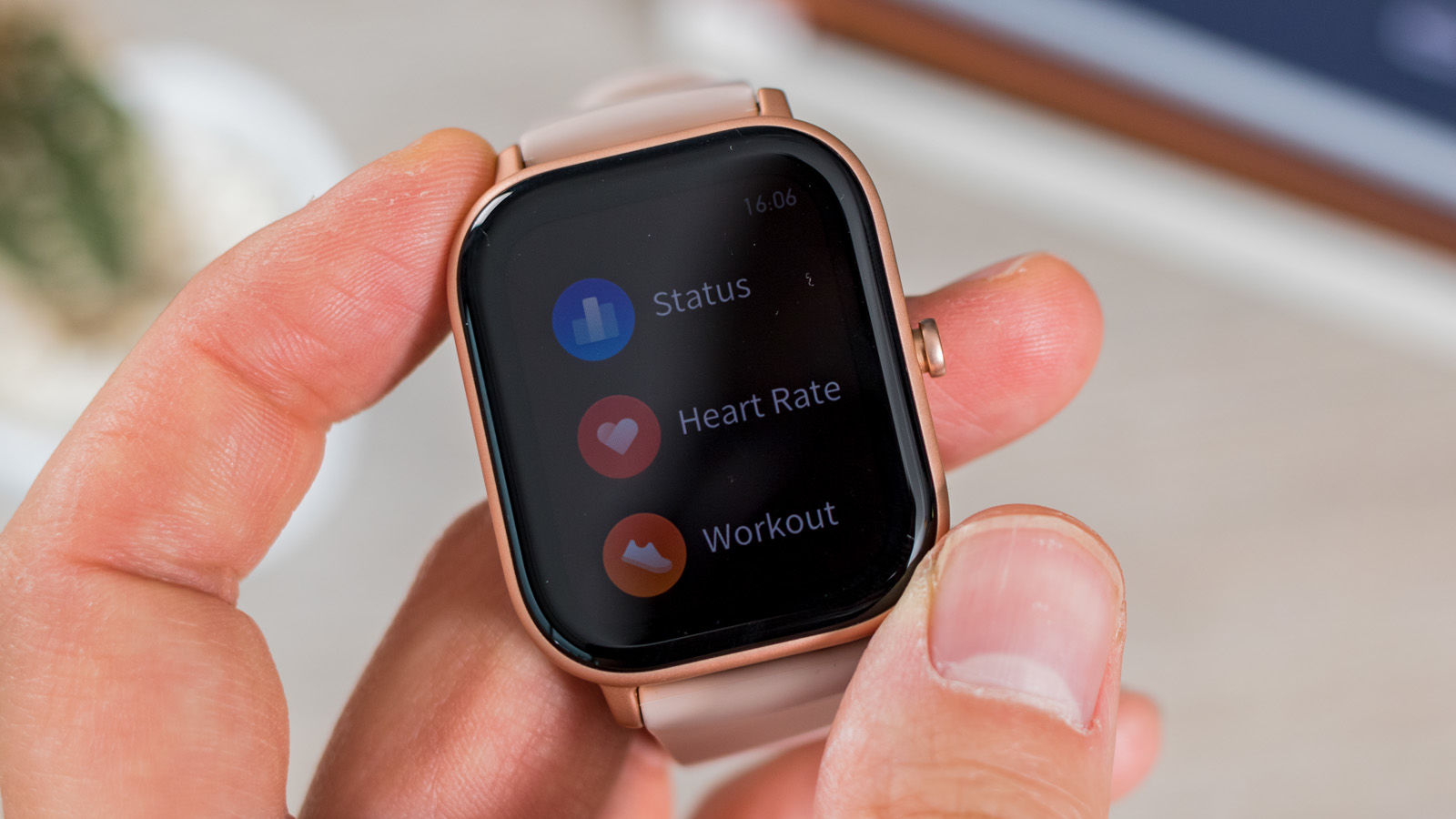 For one, it has dedicated sleep monitoring – something that’s essentially standard across most smartwatches and fitness trackers but is still oddly absent from Apple’s.

You strangely can’t see sleep data on the watch itself, but if you open the accompanying smartphone app you can see how long you slept each night, along with how much of that was deep sleep or light sleep. You’ll be told how your sleep compares to other people of the same age, and given a daily sleep score out of 100.

On a more mundane level, the biggest benefit the GTS offers over Apple and most other rivals is battery life. It’s hard to give an exact figure, as battery life depends hugely on the settings you use. For example, with my heart rate set to scan every 10 minutes, advanced sleep tracking on, and notifications active, the GTS dropped from 80% to 30% battery in a whopping 12 days of regular use.

On the other hand, at that point I turned on the always-on display option, at which point the remaining 30% disappeared in 12 hours. So on that basis you could get anything from a day or two up to a full month on one charge, which makes clear comparisons difficult. Though perhaps the one obvious takeaway is that the always-on display really isn’t worth the hit to battery. 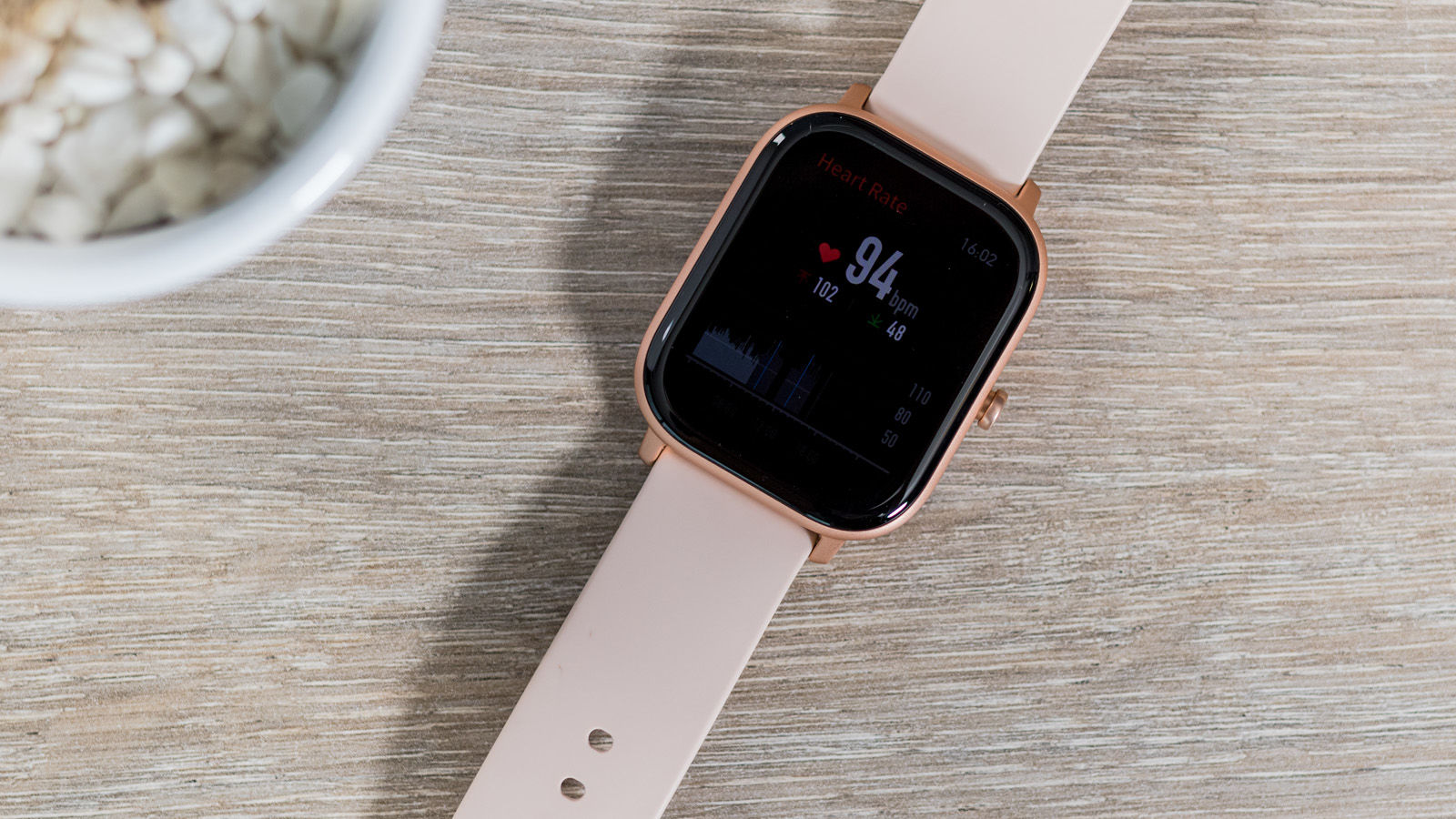 It’s on software that the GTS shows its limitations. It runs Amazfit’s own operating system, rather than Google’s Wear OS, which means there’s no meaningful integration with other apps beyond a basic notification system.

The main watch face is customisable, and offers a surprising amount of tweaking, letting you place different widgets for heart rate, step count, calories, battery, weather, calendar events, sunset times, and more, so that you can really get exactly the information you want.

Beyond that you can swipe left and right to get your activity data and heart rate, or swipe down to get to other settings like the alarm, music player, notifications, and settings.

Nothing about the experience is terrible, but it’s all a bit slow, and some things just take a few extra steps for no reason. Take notifications. Miss one and it takes a swipe, a scroll, and a tap to get back to see them all. Want to clear one? It’s a swipe and another tap. That’s per notification, mind, with no way to clear them all in one go. 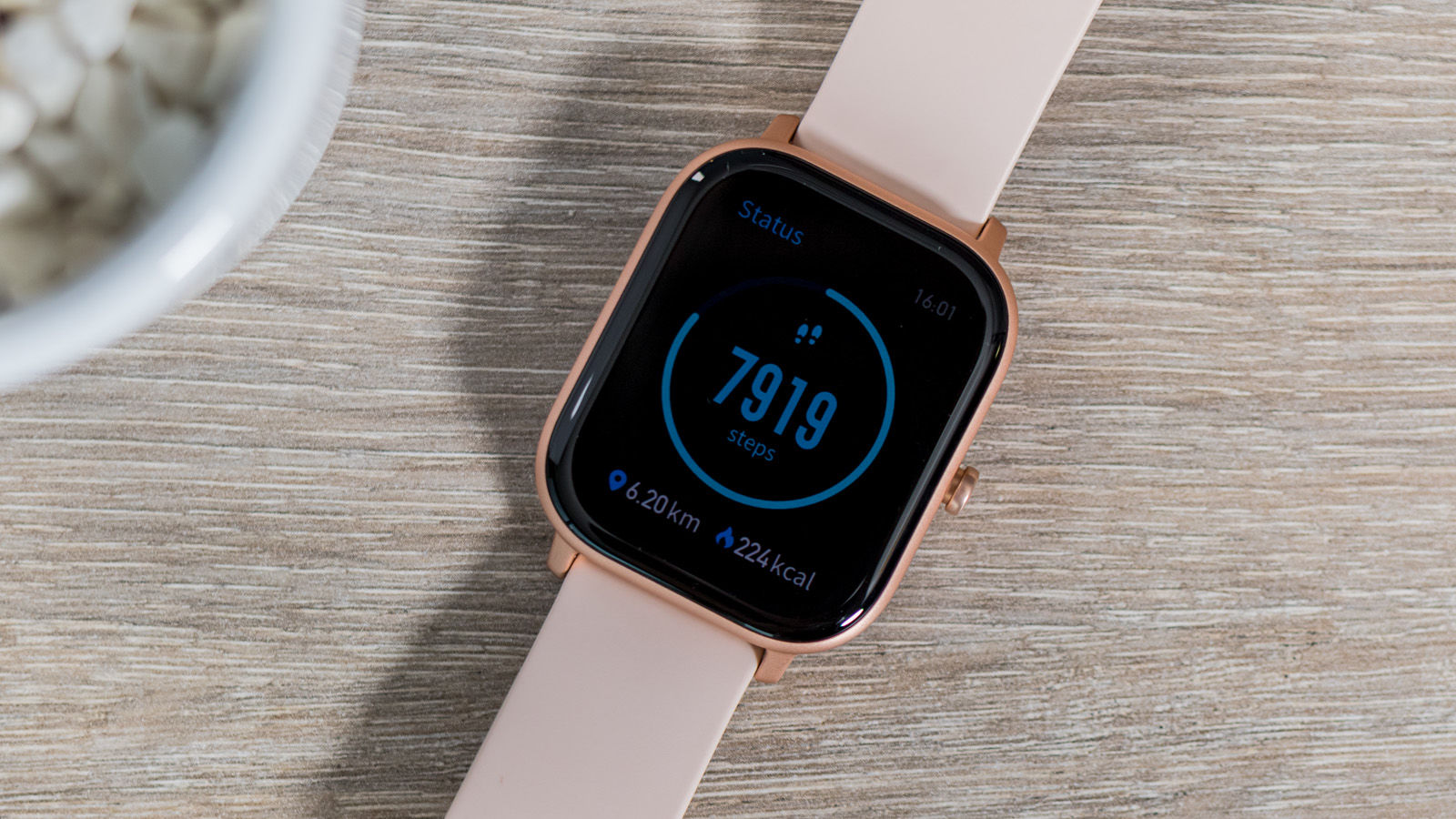 Or there’s the fact that when the alarm goes off it’s incredibly unclear how to snooze it and how to turn it off (I’m still not 100% sure even now). Or that if you open the app when there’s a firmware update available it will immediately push it to the watch whether you want it to or not.

None of these are dealbreakers, but they’re minor irritations that run throughout both the watch software and the accompanying smartphone app. This is really the only part of the GTS where you feel you’re getting what you paid for, and it’s frustrating given how solid the hardware experience is otherwise.

The Amazfit GTS offers a pretty comprehensive set of smartwatch features in a premium (if familiar) design but with a budget price point.

It’s not the best watch at anything it does, though the one-month battery life is a serious selling point so long as you can resist the always-on display. But other than LTE connectivity the GTS has just about every feature you’d look for in a smartwatch, so long as you don’t mind putting up with a few app irritations.