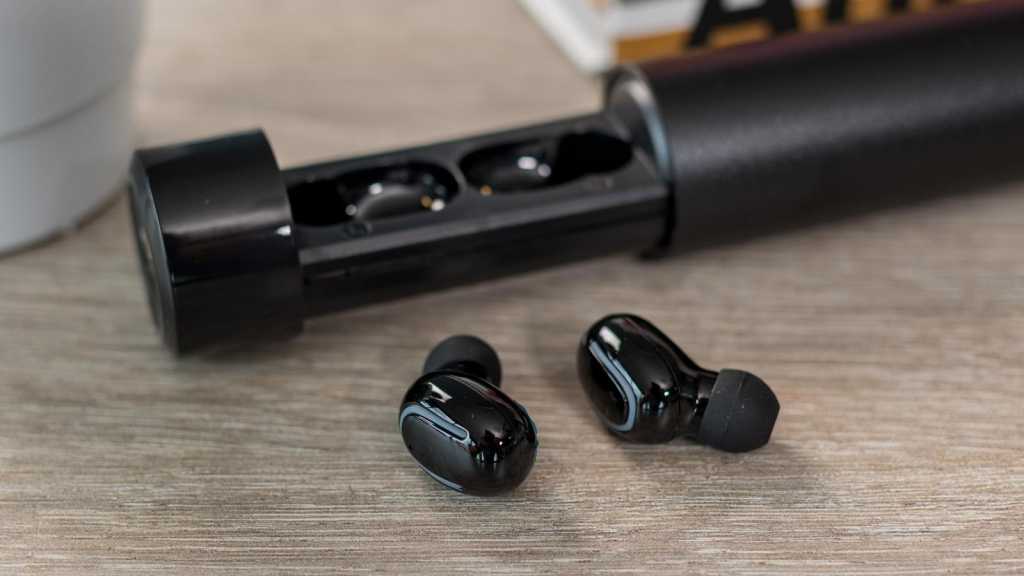 For not much money at all, the Bilikay HBQ-Q67 are a great entry-point to the wireless earbud world. Audio quality is surprisingly good and the lightweight construction of the buds makes them comfortable to wear for extended periods. It’s a shame about the microphone quality and lack of waterproofing, but at this price you can’t have everything.

If you fancy a pair of wireless earbuds then there are some very good bargains to be had if you’re willing to track down some Chinese brands rather than the quite expensive offerings from Apple, Samsung and Amazon.

One of the newest to make its way onto the market is the Bilikay HBQ-Q7, which offer not only Bluetooth connections to your smartphone, tablet or PC but a rather funky charging case too. We plug them in to see if the sounds match the stylings.

Bilikay doesn’t have a UK or USA distributor as such, so you won’t find these earbuds in the shops, but they are still available if you’re happy to buy online and wait for them to arrive from China.

We used Gearbest to acquire our review sample, where you can pick them up for just £17.26/$20.99. They are also available from sellers on eBay with prices at the time of writing around £17/$20.

Obviously, as these would be coming from China, you’ll need to take into consideration any customs charges or postage fees.

We’ve grown accustomed to wireless earbuds arriving in cases that also double as power banks for the devices, but Bilikay has taken a novel approach in terms of design. Rather than a small, curved box, the case for the HBQ-Q67 is a cylinder around 150mm high (about same as a Samsung Galaxy S9). Not only that, the top slides up to reveal a chamber holding the two earbuds inside. 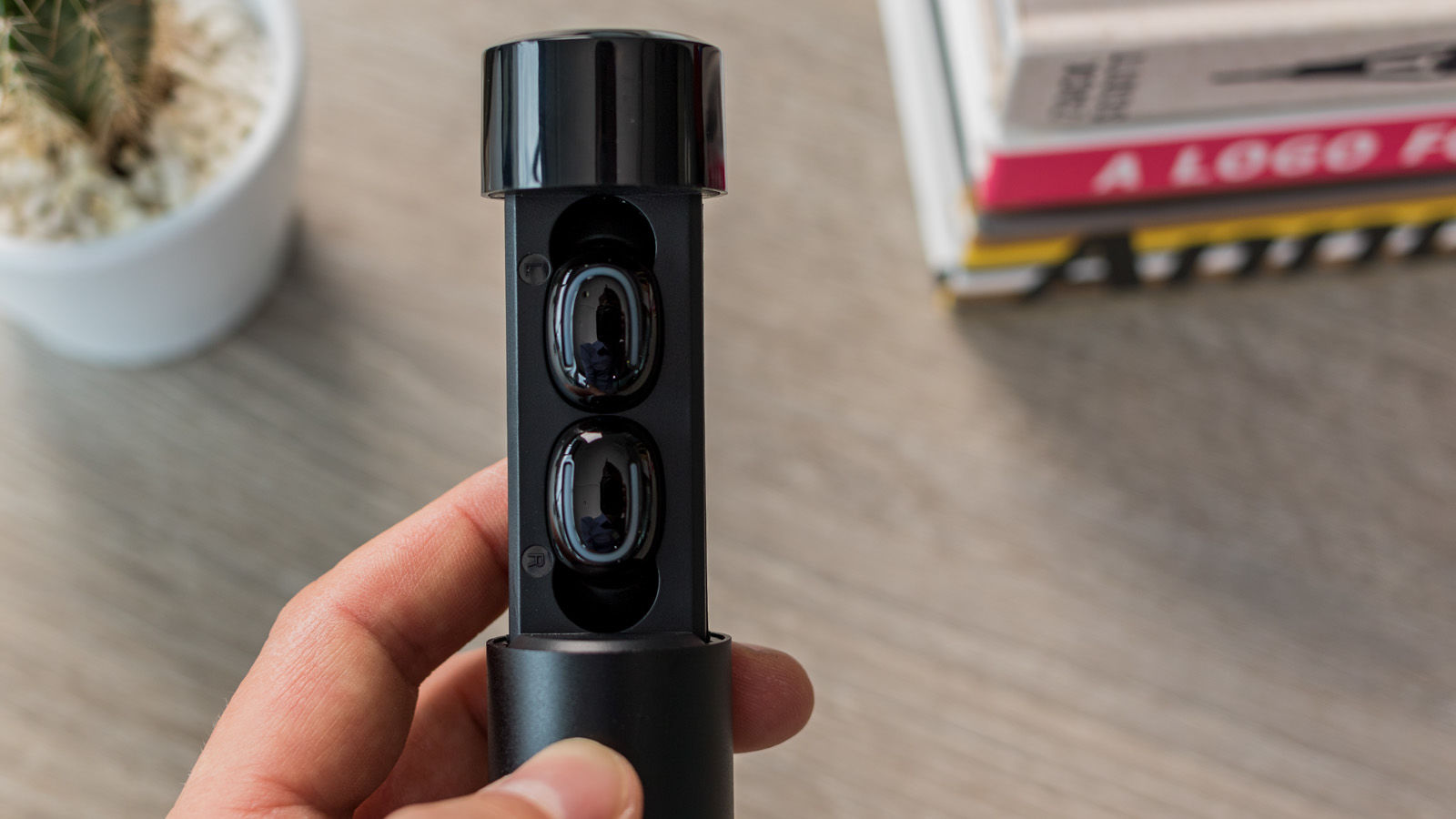 It’s reminiscent of the device used by the Men in Black to remove your memories, although you won’t find a red light on the outer edge to stare into, instead there’s a digital readout that lets you know the percentage of charge left in the case.

We have to admit that it all looks pretty fun, but you’ll want to keep it in a bag rather than your trouser pocket as it might get you some strange looks when out and about.

Removing the earbuds can be a little finicky, with the smooth edges of the buds giving little purchase and the edges of the case too high to allow easy access. Once you pry them free, they reveal themselves to be very lightweight, with smooth plastic, pill-shaped chassis and the ear stalks sticking out at a 45-degree angle, much like many other buds of this type including Sony’s WF-1000XM3.

The outer surfaces have u-shaped LED strips that flash blue or red, the former to let you know they are connected and the latter when they’re not. When in the case, red is used to show that the buds have yet to reach full charge.

Each bud also houses a microphone for telephone calls and clickable buttons under the surface. We could find no mention of a waterproof rating, so it’s best to assume that the Bilikay are only safe in gentle rain rather than the shower.

Connecting the HBQ-Q67 to our devices proved simple. When taking them out of the charging case they immediately go into pairing mode and our smartphone located them quickly. The good thing is that once a device is paired, the earbuds will automatically search for them and connect when turned on.

Our PC also played nicely with the earbuds, displaying no delay or sync issues with video we streamed from YouTube and other services. It wasn’t quite a plain sailing with our TV, as the delay become evident straight away. This isn’t just a problem for the Bilikay buds though, as we’ve experienced the same problem with other Bluetooth headphones in this category. 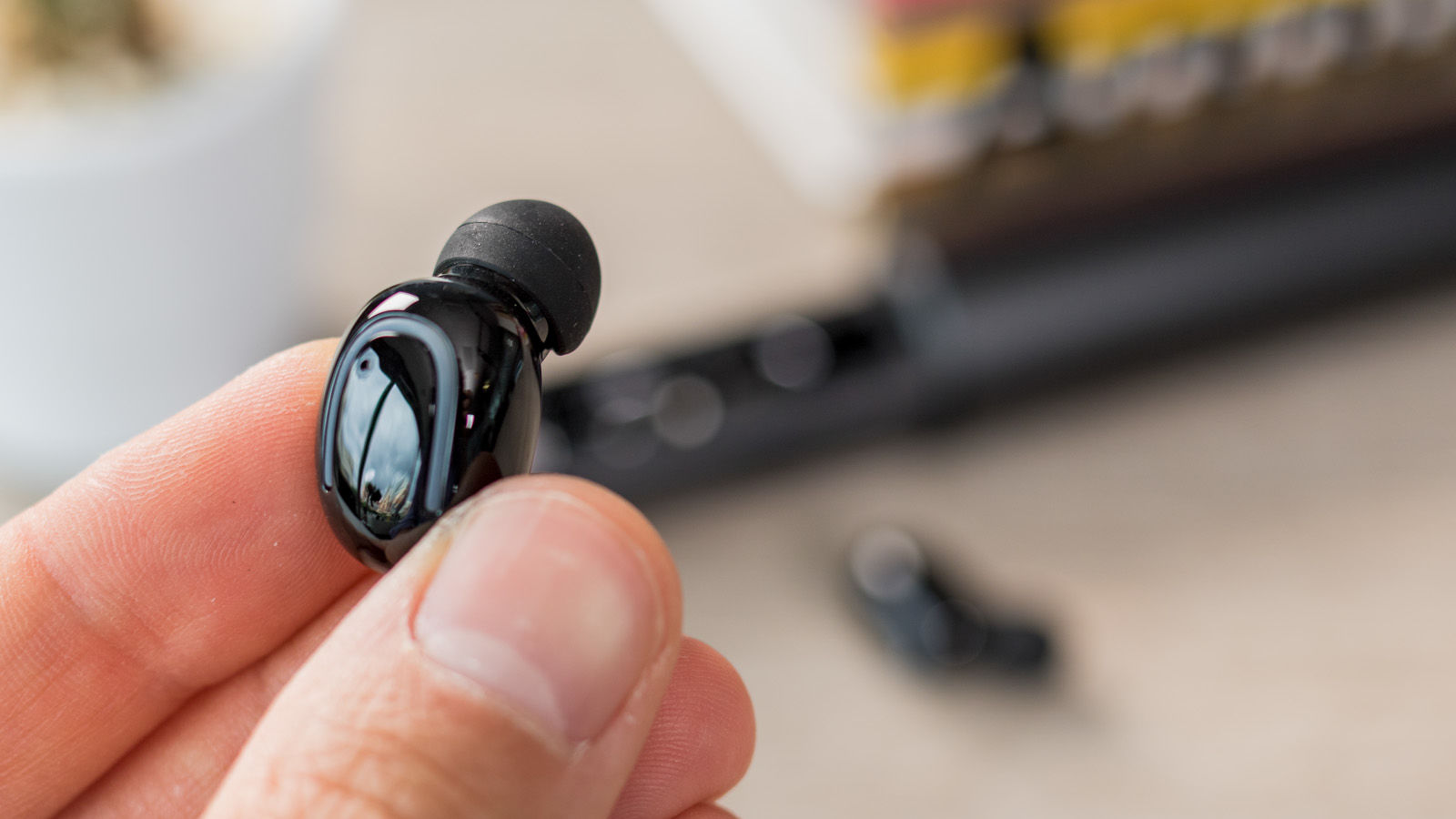 Sound quality is impressive for such light buds, with decent bass and a good separation for the mid and treble frequencies resulting in a balanced mix. As these are in-ear buds, they cut out quite a bit of noise naturally, making them a good option in busy environments, but they’ll never be quite as dampened as a proper pair of over ear models.

The built-in buttons allow you to control playback and phone calls. Click the button once to start or stop a track, twice to skip forward to the next one or three times to go back. When someone is calling you it’s a single click to answer or a double click to reject the call.

Due to the positioning of the buttons, and the force needed to click them, we found that simply popping one out and using it as a remote control was the best option, otherwise you’re essentially jamming them into your ears whenever you want skip songs on an album.

Call reception was a little disappointing, as while we were able to hear the recipient clearly, they reported that the microphones were muffled and indistinct. Still, when you consider the price on the box, there have to be some corners cut somewhere.

Battery life is respectable, as we managed to get a little over four hours from the HBQ-Q67 buds before they switched off. Returning them to the charging case saw them get back up to full power in a little over an hour.

One thing to note is that the case has a normal USB port as well as a micro-USB slot, so you can actually top up your phone in an emergency. The case has a 1500mAh battery inside, so is be good for several charges of the earbuds before needing to be plugged in.

Those looking for a good pair of budget wireless earbuds have a wide range of options now.

These Bilikay HBQ-Q67 buds offer simple connectivity, good quality sounds, and a novel case all for a frankly silly price.

They don’t quite have the aesthetics or microphone standards of the Redmi Airdots we recently reviewed, but for a little less money you get a pair of very useable and comfortable earbuds with no strings attached.