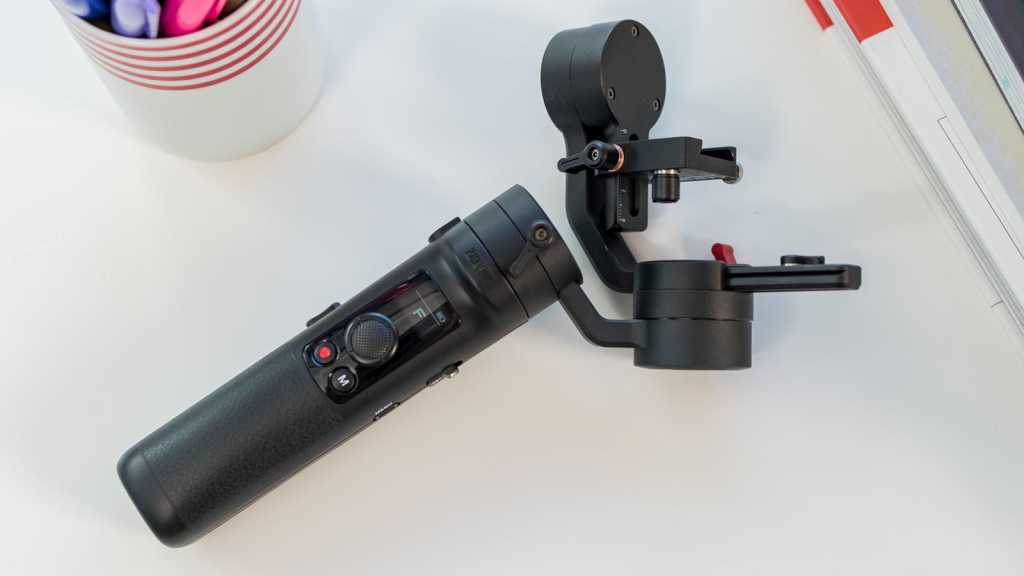 It may not be quite as versatile as the marketing suggests – you’ll still need to buy an extra action cam cage and switching cameras is far from seamless – but if you want to carry around one stabiliser to cover multiple cameras, the Crane M2 does the job well. Great battery life, solid performance, and an impressive array of stabilisation modes are enough to make up for slightly clunky controls – just make sure your camera is compatible before you commit.

The modern vlogger or videographer is more likely than ever to shoot not only across multiple devices, but multiple types of devices, darting between a mirrorless camera, a smartphone, or an action camera as and when the need arises.

It’s enough of a pain to carry round multiple cameras, but it’s made even worse if each requires its own gear, which is why the Zhiyun Crane M2 is so welcome: a compact stabiliser and gimbal that will fit a mirrorless, a smartphone, or an action cam, all in one device.

The Crane M2 costs £259/$269, and you can order it directly from Zhiyun’s official Aliexpress store, Amazon US, Amazon UK, or Wex Photo & Video.

That’s a chunk more than some smartphone gimbals – the latest DJI Osmo Mobile 3 is only £99/$119 after all – but is affordable by the standards of mirrorless stabilisers – and a bit of a bargain when you factor in the support for other types of device too. 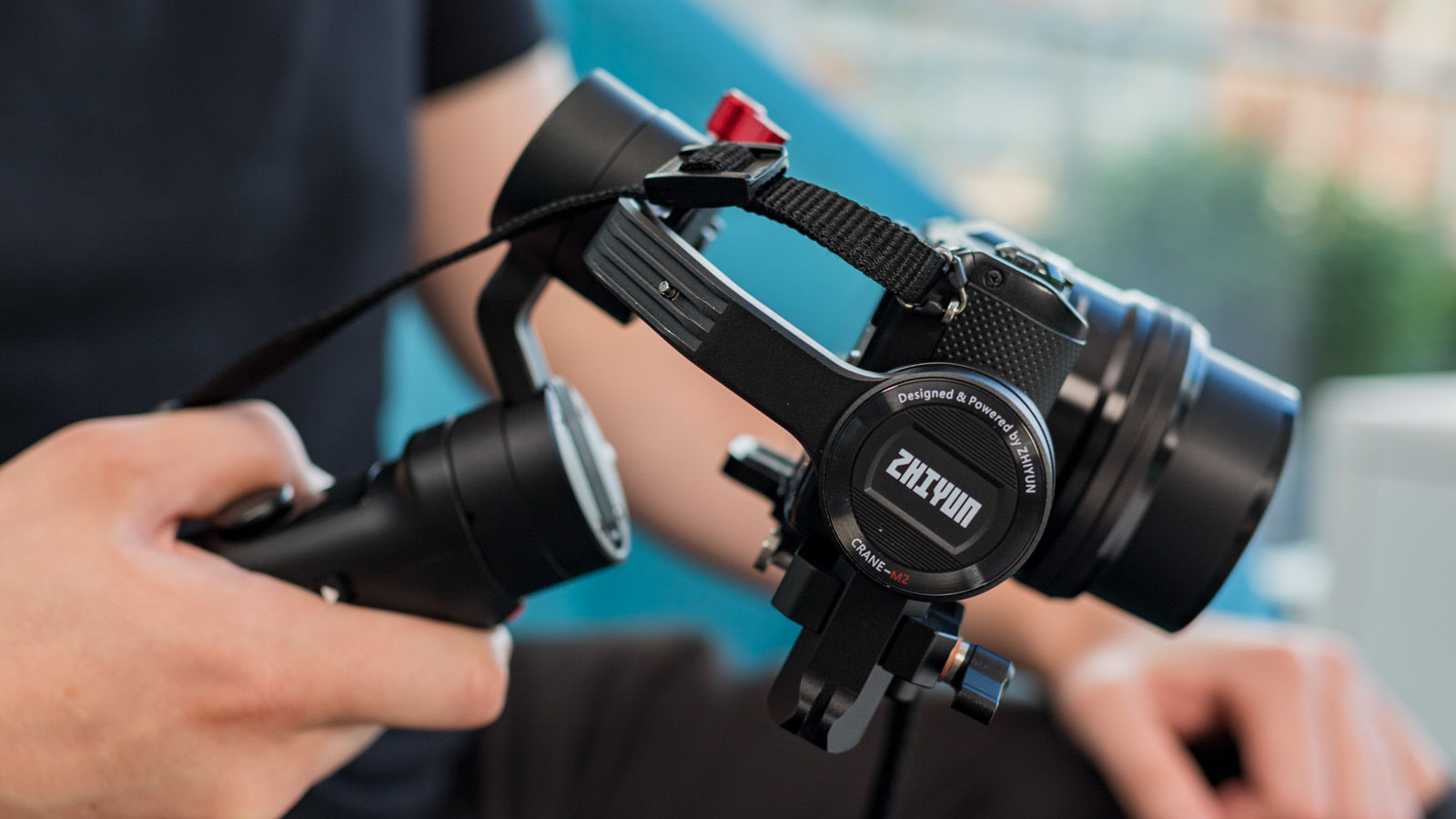 Three for the price of one

The chief selling point of the Crane M2 is undeniably its versatility. Most gimbals are designed to serve a specific purpose: smartphones, mirrorless cameras, or action cameras. If you’re lucky you might find a stabilizer that covers two of the three, but compatibility with all three makes the Crane M2 fairly unique.

Still, there are caveats. It should go without saying that mirrorless cameras, phones, and action cams are all different shapes and sizes – hell, there are plenty of different builds within each of those categories, let alone between them – and so you can’t quite expect to dive between different devices in seconds as you need to use a different mount for a mirrorless than you would for your phone.

The Crane M2 also can’t support every mirrorless out there, so it’s worth checking Zhiyun’s compatibility guidelines to see if your model is supported. For the most part it’s a question of size and weight – with a max supported weight of 720g some of the bulkier mirrorless ranges won’t work, and even some smaller models will struggle once you put a lens on, so this is really best suited to vloggers who are already using a lightweight camera anyway. 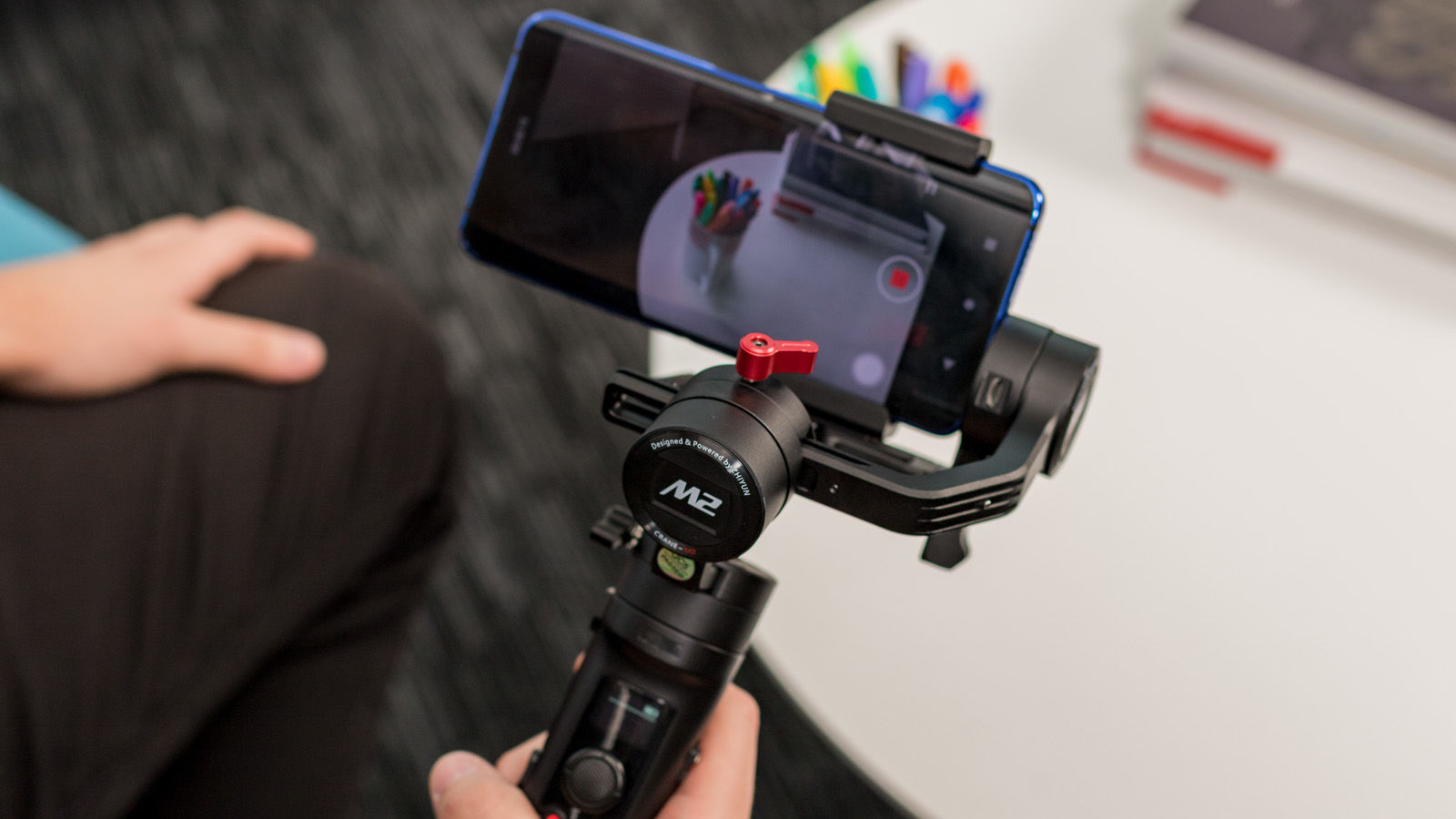 You’ll also need to buy a separate camera cage in order to mount a GoPro, as Zhiyun has only included mounts for smartphones and mirrorless cameras with the M2 – so out of the box this still doesn’t quite cover all three camera types.

If you keep each respective camera clipped or screwed into its mount and simply swap those on and off you’ll save some time, but there’s still the question of calibration: a mirrorless weighs a lot more than a GoPro, and the weight is distributed differently. That means you’ll have to adjust settings every time you switch devices no matter what.

That’s not really a criticism of the Crane M2, but more just a way of managing expectations: this won’t let you switch devices on the fly and carry on filming without missing a beat. This is more about saving you from carrying multiple gimbals around when you know you’ll be filming with different devices across the day. 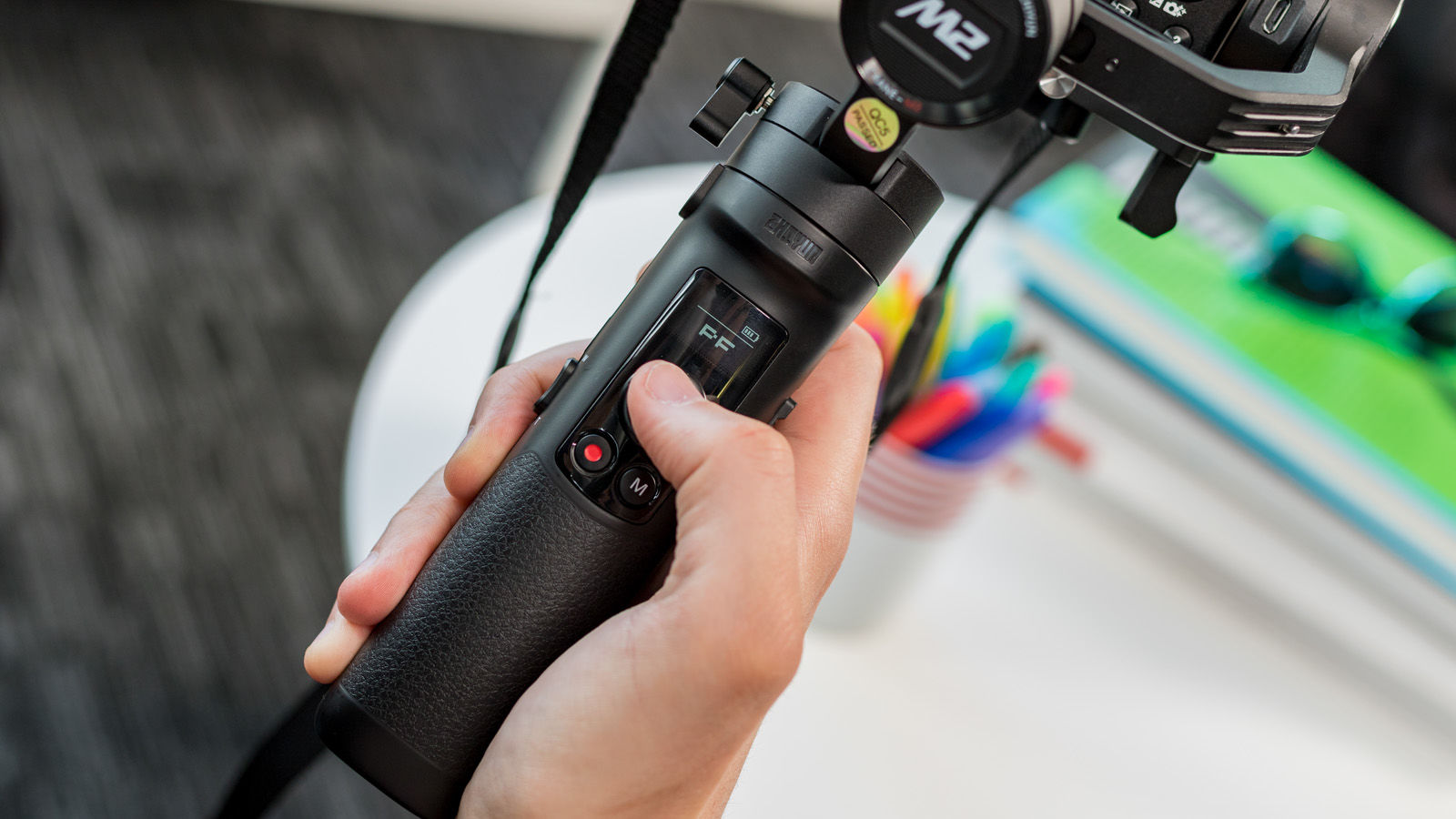 The M2’s versatility isn’t just in the cameras it supports. It also offers six different types of stabilisation to suit whatever shooting style you want, from the bog-standard to some that are a little more niche.

Pan following (PF) is one of the standards, panning the camera as you turn the gimbal from side to side, while locking tilt and roll. Following (F) pans and tilts, while you can manually control the roll with the thumbstick. Finally, lock (L) does what it sounds like: locks every mode to keep the camera static while giving you manual control and tilt and pan using the joystick.

Those three modes are pretty standard, but Zhiyun has also thrown in three more options. First up is ‘Go’ mode, which locks roll while speeding up the pan and tilt controls so that you can follow fast-moving subjects more easily – though be warned, it takes practice to keep control of the camera while tracking that quickly. 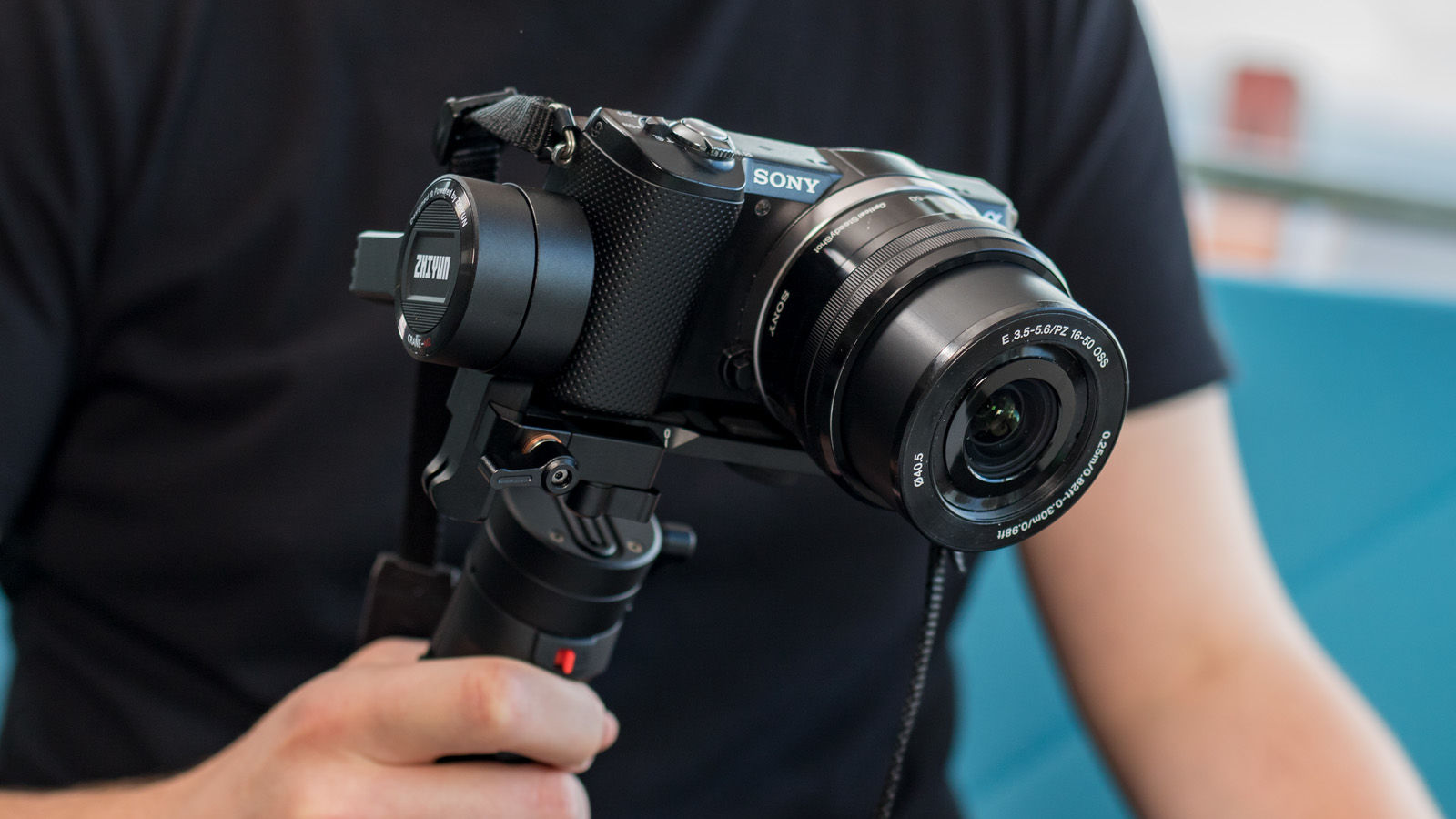 Then there’s Vortex mode, a nifty little feature you’ll probably never use. It automatically rotates the camera 90 degrees to face the same way as the handle, and ties panning to the joystick so that you rotate the camera to create a spinning vortex image. Again, it’s cool, but obviously has specific and limited use cases.

Finally, in POV move all three axes move following the stabiliser handle, giving you total freedom to move the camera in any direction while still enjoying a stabilising effect. As with Go mode, this takes a little work to get the hang of if you’re used to having one axis locked, but is perfect for action cam footage that really wants that POV effect.

One downside of having all those modes is that selecting them gets a little confusing. PF, L, and POV are all tied to the main ‘mode’ button, which cycles through the three. Go and Vortex are each tied to double taps of that same button for some reason, and F is turned on by hitting the trigger on the back of the handle.

Once you remember where everything is this is fine, but it’s surely not the most user-friendly way to manage the modes, and doesn’t really speed up the process of switching between them, as you’ll find yourself tapping all sorts of buttons to try and remember which one triggers the mode you want. 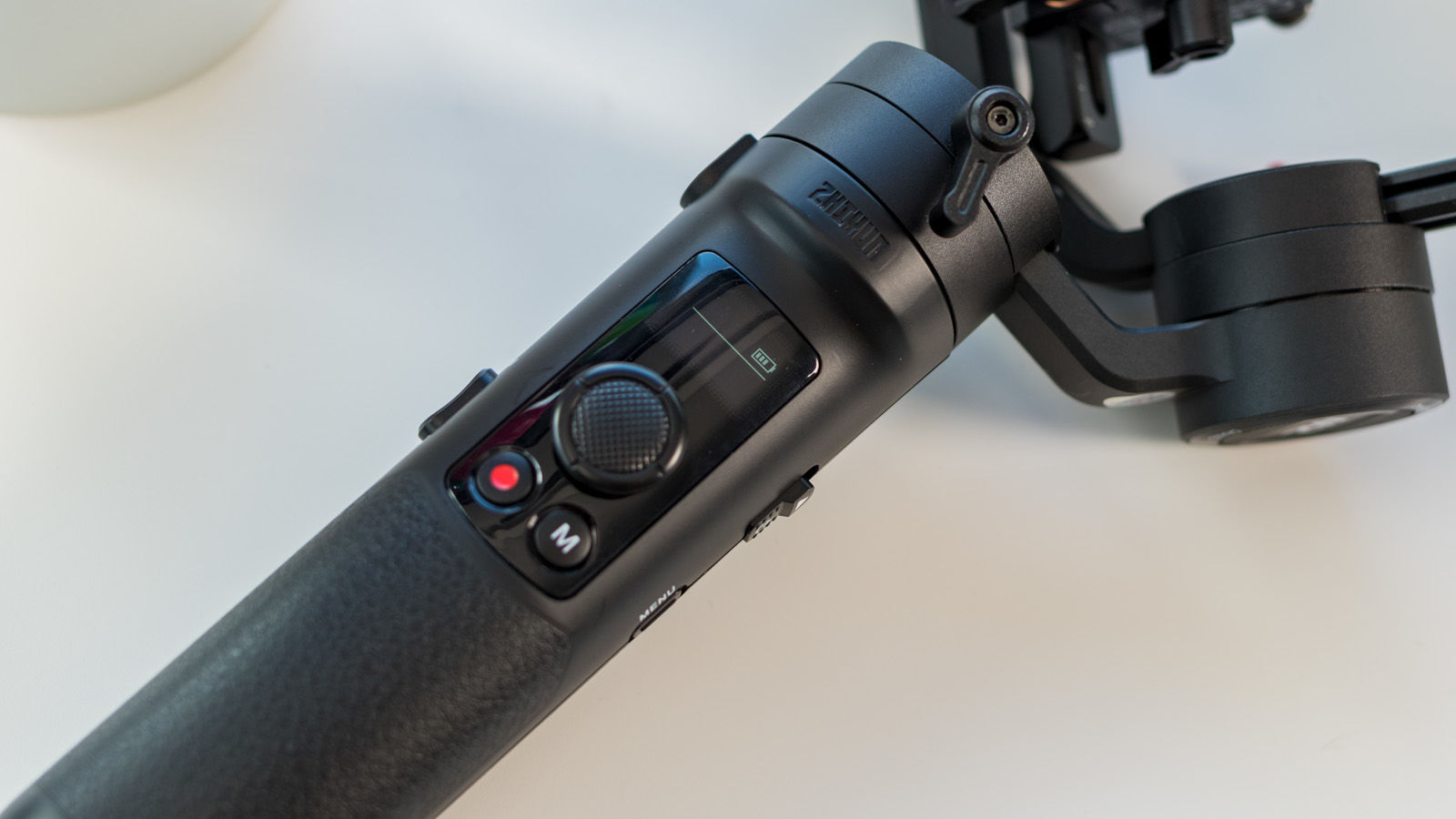 Otherwise the controls are simple enough, with a few buttons, the joystick, and a small screen to display the current mode. There are record and zoom controls you can use if you connect the gimbal to your camera or phone via Wi-Fi (with an accompanying app in the case of phones), and that’s about it.

Charging is over USB-C, and battery life is great at up to 7 hours – carrying the M2 around a busy trade show and shooting multiple videos, I didn’t have to top it up once. You can also use it as a power bank for your camera or phone to keep those topped up while you shoot, though this will drain the gimbal’s own battery fairly quickly.

Finally, Zhiyun includes a simple tripod base that screws into the bottom of the handle so that you can set this up in a stable spot when you don’t want to go handheld.

It may not be quite as versatile as the marketing suggests – you’ll still need to buy an extra action cam cage and switching cameras is far from seamless – but if you want to carry around one stabiliser to cover multiple cameras, the Crane M2 does the job well.

Great battery life, solid performance, and an impressive array of stabilisation modes are enough to make up for slightly clunky controls – just make sure your camera is compatible before you commit.