The Watch GT 2 does what it does well, but with no ability to install apps, it’s much more limited than other smartwatches.

Huawei isn’t generally known for incremental upgrades, but this sentiment does apply to some of its wearables.

The Watch GT 2 – at a glance – looks barely any different to its predecessor. But there are some improvements and upgrades.

For example, there’s TruSleep 2.0 to which TruRelax is added. It helps you recognise when you’re stressed by recording the values ​​of HRV (heart rate variation) and notifying you.

Before going into pricing and availability details, you should know that you can find the new Watch GT 2 in two different sizes. The 42mm for those with a smaller wrist, and the 46mm for those who prefer a size big. We are reviewing the larger 46mm model here.

The official prices are:

Check out our chart of the best smartwatches for alternatives.

If the new Watch GT 2 family is characterised by anything, it is for offering a shiny polished metal body that closely resembles traditional analogue watches, with a 3D crystal on the top that fits perfectly flush with the bezel.

It’s not just for aesthetics: the display is shown in the highest layer of its glass with very good viewing angles. The company has decided to maintain the same range of case sizes as the previous generation, with the 42mm model and the 46mm model.

In both cases, the weight turns out to be tremendously light, since the most compact weighs just 29g, while the larger model reaches 41g. On average, the weight of this new series has been reduced between 5 and 10g compared to the previous ones.

They look quite different to each other in style, with the smaller option looking similar to Samsung’s wearables. 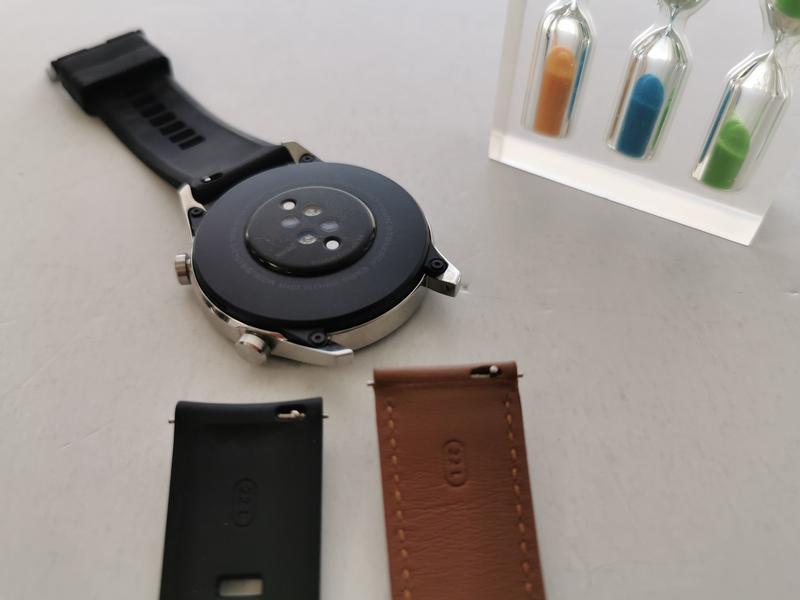 The thickness of the body of both is 10.7mm, which makes it fit under all but the tightest of shirt cuffs. We didn’t find the 46mm case uncomfortable or heavy, even for sleeping.

There are a couple of physical buttons for operation, which are complemented by the touchscreen, which offers a fairly fast and agile response of the interface.

The unit you buy comes standard with a pair of straps to be able to exchange them. Each case size has a silicone Sports edition, a Classic edition with a leather strap, and another Elite edition with a metal strap.

The Watch GT 2 is 5ATM rated which means it can survive 50m under water. Note that the touchscreen won’t work when wet.

Inside the Watch GT2  we find the new Kirin A1 chipset with an advanced Bluetooth processing unit that will offer significant savings in energy consumption. Together with the Cortex M7 coprocessor, it is supposed to improves the battery life compared to the Watch GT, which was already very good.

The 1000 nits of brightness of the screen is something you will appreciate if you do outdoor sports, making it easy to read any information on the screen. Music playback is available stand alone with 4GB space to store your favorite tracks – 500 mp3s, according to Huawei. 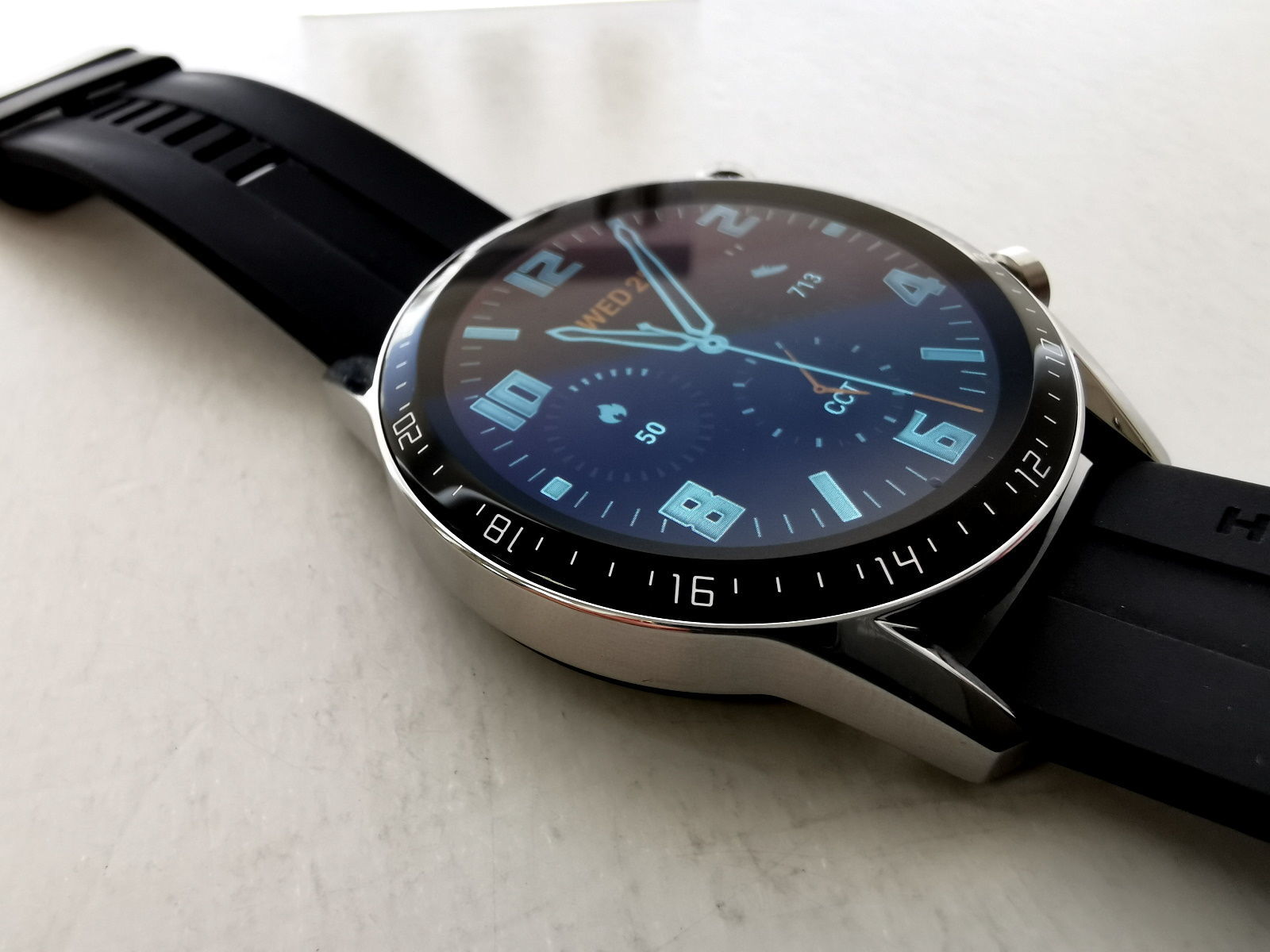 There is no version with 4G cellular connectivity, at least for the moment, so you’ll need to stay connected to a smartphone for a lot of functionality. You can take calls on the watch, thanks to the new integrated microphone and speaker, which work well.

According to Huawei, this new Watch GT 2 series improves coverage and increases connection distances with the smartphone even in situations where the smartphone is up to 150m away. This is thanks to Bluetooth 5.1. Obviously, that distance is line of sight and is considerably shorter when there are walls and other

Huawei states that the 46mm Watch GT 2 battery can guarantee a battery life of two weeks before having to recharge, or 30 hours with the GPS on.

After five days of intensive use, with WhatsApp notifications activated, as well as the smart heart rate monitor turned on constantly, the remaining battery percentage was at 54% of its capacity.

This confirms to us the advances in energy efficiency of the watch, both software and hardware. Being optimistic, this means that the 46 mm model, with a 455mAh battery, will last 10 days before having to recharge its battery.

Not quite the two weeks Huawei promises but it may be achievable with different usage. 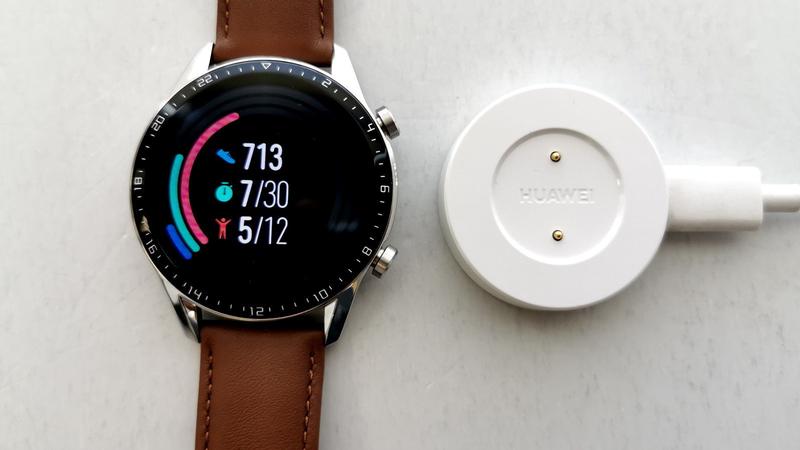 Note that if you are thinking about getting the 42mm model, the battery drops in half, offering a capacity of only 215mAh.

For the average user who uses the GPS on to run three times a week, the duration will be shorter, but still much longer than what we are used to seeing from other smartwatches.

In fact, it’s in line with the times achieved by the Samsung Galaxy Watch, which is one of the most power efficient, even exceeding a week of use but – and here’s the rub – that’s with the screen deactivated. So, kind of pointless.

That’s why the Watch GT 2’s battery life is genuinely impressive, as those 10 days are with the screen on (not always on, but on when you raise your wrist or press one of the buttons).

The charging base is a similar to that used by the other smartwatches on the market, a flat piece of plastic with magnets to position the watch on top. The connection is USB-C in order to take advantage of the same cable as your Android mobile.

The watch uses Huawei’s own Lite OS rather than Google WearOS. This is mainly for battery life, not because Huawei can’t use Google software.

Here it should be noted that the ecosystem of applications is not as wide compared to Google, or others such as Samsung’s TizenOS which already has a long way to go. However, Huawei claims to be encouraging developers to make apps compatible.

(In fact, it’s important to know that you can’t install apps at all on the GT 2. You get what you get, and that’s it. Obviously the watch can receive notifications from apps on your phone, but these tend to be clunky. If the Apple Watch sets a benchmark for notifications with a score of 10/10, I’d rate the way the GT 2 handles notifications at 2/10 – JM)

Although the system interface has improved considerably, with a large number of functions, we continue to miss a greater variety of applications as on WearOS smartwatches.

At the moment, the Watch GT 2 can monitor up to 15 different sports to monitor the workouts and collect the data of any activity carried out throughout the day. 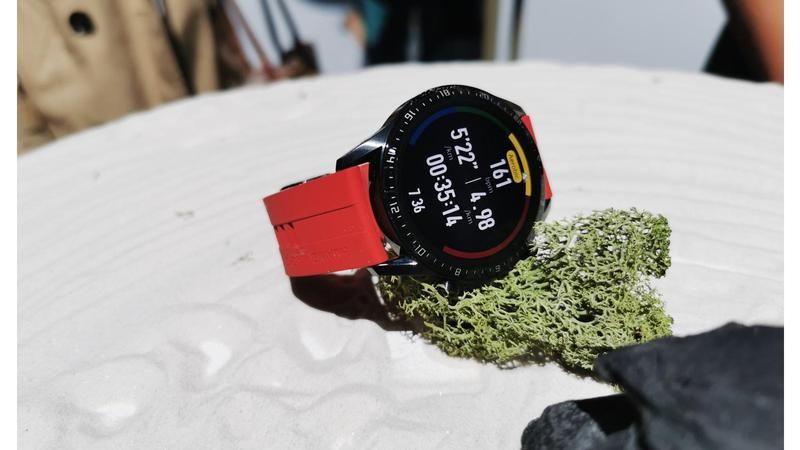 The watch syncs with the Huawei Health App, which doesn’t offer support for third-party applications in the fitness section, such as the recognized Strava or MyFitnessPal.

Graphically it has improved the app, and it has the area of ​​My Medals with which you get rewards as you progress in your achievements. However, compared to other platforms such as Fitbit or Samsung Health, it has a path of improvement to offer greater interaction with social networks, or even compete with other users for greater motivation.

Another example that I like to cite in these cases is that of a Maps application in order to be able to navigate somewhere. Without a dedicated app, you won’t be able to take advantage of the Watch GT 2 watch’s potential, something that all its competitors offer.

During our time with the Watch GT 2, we can safely say Huawei has advanced very positively in key aspects for the user such as design, interface use experience, as well as solid battery life.

The variety of sizes of its case and the wide offer of interchangeable watch straps next to the different editions available, gives you a wide variety of choice.

Huawei has work to do to realise the full potential of the hardware, though. The Watch GT 2’s Lite OS is limited when it comes to software and apps, which is a big drawback compared to rivals from the likes of Samsung and Apple. The long battery life is the primary attraction here.