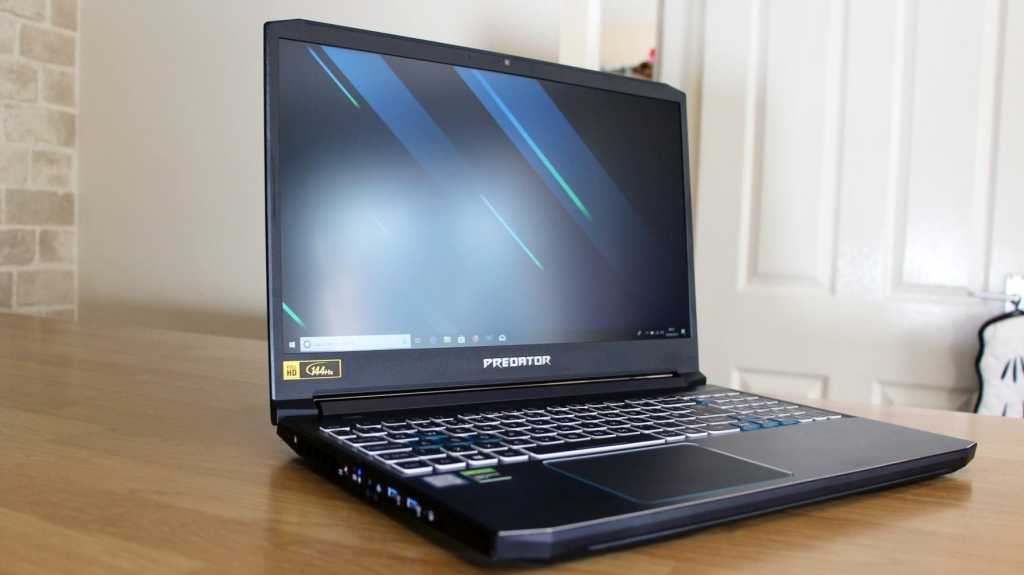 The Helios 300 impresses. Its GPU is fast enough for 1080p gaming and esports, and the screen has good contrast and a 144Hz refresh rate. It looks solid and has reasonable ergonomics, and it’s much cheaper than rivals. It misses out on some finesse, but it’s a good budget option.

The Acer Predator Helios 300 is one of the most affordable gaming laptops we’ve seen for some time – at £1,199, it costs less than half as much as more prestigious machines.

Of course, an affordable price does mean compromises, but Acer reckons that this machine still has the speed and quality to provide an excellent experience.

It’s better for US buyers: across the Atlantic the $1,199 version includes the same GPU alongside a Core i7-9750H processor.

Check out our chart of the  best gaming laptop.

The Helios 300 may be affordable, but Acer has done a good job of making it look respectable.

The body is largely made from metal, and it looks good: the cliché black-and-red colour scheme has been replaced by black with an attractive shade of blue.  The blue highlights the trackpad and the WASD keys, and the keyboard also has a blue backlight. It also illuminates the logo on the lid.

Aside from those highlights, the Helios is restrained – the angled air vents aren’t too big, and there isn’t any extravagant design elsewhere.

Build quality is middling – not surprising given the price. There’s a little give in the wrist-rest, and the screen moves too much. It’s not a ruinous issue – just use a protective sleeve if you leave the house. Similarly, the 23mm thickness and 2.4kg weight are only mid-range figures.

It’s a good bill of health at this price, though, and you’d have to pay plenty more to get something better.

Take the Alienware m15, which is slimmer, lighter and sturdier, with better design and more features – and available with the same CPU and GPU as the Helios. The price for the same specification, though? A cool £1,649.

The port selection is another area where the Acer is fine but not ground-breaking. It’s got three USB 3 ports, a Type-C connection and HDMI and mini-DisplayPort outputs. It doesn’t have faster USB 3.1 ports, though, and there’s no Thunderbolt or card reader.

The keyboard has a good layout, with large keys, full-size cursor buttons and a numberpad. Plus there’s also a dedicated button to launch Acer’s PredatorSense app.

The metal beneath the keyboard is sturdy, so it’s easy to hammer the buttons down. They’ve got a reasonable amount of travel, too. However, the buttons are quiet and soft – so they don’t have the crisp, rigid typing action that’s preferable on gaming laptops.

It’s not a huge issue. The keys are well laid-out, and they still have the speed and consistency to handle mainstream gaming and esports. However, serious players will prefer the increased speed and firmness of the Alienware’s keyboard.

The trackpad’s surface is fine, and the two built-in buttons are snappy, but they still push down too far. If you’re at all serious about gaming, connect a USB gaming mouse.

The 15.6in screen has a Full HD 1080p resolution, which means that games will look crisp without straining the GPU. It’s an IPS panel with a 3ms response time, which bodes well for all gaming scenarios.

The 144Hz refresh rate is good, too, and it means games that can run smoothly at up to 144fps – great for competitive scenarios that need lightning-fast reactions. Single-player games will also look better when they run smoothly at high framerates.

Of course, the 144Hz refresh rate comes with caveats. The GTX 1660 Ti won’t run all games at triple-figures without some graphical cut-backs. This screen also doesn’t have Nvidia G-Sync, so there may still be occasional tearing. However, games will still look very smooth on this panel.

Quality is good too. The Acer’s brightness level of 343cd/m2 is impressive and the black point of 0.28cd/m2 is deep enough to properly render dark areas. The contrast ratio of 1,225:1 is high enough to deliver loads of punch and vibrancy.

Colours are accurate, and uniformity is good – the backlight strength and colour accuracy barely deviate across the screen.
The Acer’s poorest benchmark result is an 84.9% sRGB gamut coverage level. This screen won’t render every colour in the sRGB gamut, but it’s still high enough to make games look good.

If you’re concerned about screen quality, then Alienware’s machines are better. However, the Acer’s screen is still easily good enough for gaming at a lower price. It won’t disappoint.

The speakers are acceptable – they have enough volume, and the high-end is crisp. Treble noises are muddy and bass is weak. A gaming headset would be better, but the kit here can be used in a pinch.

The GTX 1660 Ti is one of Nvidia’s more recent releases. It uses the latest Turing architecture, but it cuts costs by getting rid of dedicated cores for Ray-Tracing and DLSS.

You might not get access to those technologies, but not many games actually support them – so it’s not a great loss right now. The GTX 1660 Ti still has a solid spec for 1080p gaming, though, with 6GB of memory and 1,536 processing cores.

And, if you’re still keen, the RTX 2060 models are available.

The Acer zipped through Total War: Warhammer 2 and Ghost Recon: Wildlands at medium settings with averages of 105fps and 79fps, and it handled Ultra settings at 58fps and 46fps.

The Helios is fast enough to handle today’s top games at good graphical settings. And, happily, there’s easily enough pace to run esports titles and less-demanding games at triple-figure framerates – so the 144Hz screen can be used to its full potential.

Acer’s machine also has two overclocked modes, and these options saw gaming results increase by a couple of frames. It’s not a transformative upgrade, but it’s welcome.

The GPU does come with caveats, though. At Ultra settings, minimum framerates sometimes dipped to around 33fps, which means that tough games – and games in the future – may stutter at their highest settings.

If you are concerned about future playability and high settings, then the RTX 2060 is better. That GPU delivers a sizeable upgrade: it scores around 34,500 points in 3D Mark Sky Diver. That’s around 5,000 points more than the GTX 1660 Ti.

The GTX 1660 Ti’s lack of Ray-Tracing is obvious, too. In 3D Mark’s dedicated Port Royal benchmark, the weaker GPU scored 1,555 points. An RTX 2060, with its dedicated cores, is twice as quick.

The Core i5-9300H processor has four Hyper-Threaded cores that support eight simultaneous threads. It has solid speeds, too: it starts at 2.4GHz and accelerates to a peak of 4.1GHz. It’s paired with 8GB of memory.

It won’t cause any gaming bottlenecks, but it can’t compete with the i7-9750H that’s appearing in rival machines – and in pricier versions of the Helios. That part has six cores that support twelve threads and it runs at 2.6GHz and 4.5GHz.

The Core i5’s Geekbench score of 13,211 is enough to run games, handle day-to-day browsing and multi-tasking, and to run mainstream work tools – so it means the Acer is versatile.

It’s solid, but it’s unable to compete with Core i7 chips and machines with 16GB of memory. Those parts are around 10,000 points faster in Geekbench. The difference can be seen in PC Mark 10, too: the Acer scored a reasonable 4,834 points, but beefier laptops are around 500 points quicker.

The real-world impact of a Core i7 CPU and 16GB of memory won’t be felt badly in games, but those components will deliver better multi-tasking and productivity performance.

The Helios has no real thermal issues. There’s noise when gaming, but it’s no louder than anything else, and easy to mask with speakers or a headset. The temperatures are fine too – the CPU and GPU peaked at 80°C and 71°C, and the exterior remained cool.

Elsewhere the Helios delivers Killer-branded Gigabit Ethernet and 802.11ac wireless, both of which are optimised for gaming. The SSD delivers read and write results of 2,863MB/s and 1,000MB/s, which means fast boot and game load times, and there’s a 1TB hard disk.

In a video playback test with the screen at 120cd/m2 brightness the Helios lasted for just over six hours. That’s also the lifespan we’d expect when word processing or web-browsing, and it’s about level with Alienware’s machines – a solid result for a cheaper option.

However, during a gaming the Helios barely made it past an hour. If you want to play games, push the components or run the screen at full brightness, you’ll need to stay plugged in.

The Acer Predator Helios 300 is an impressive, affordable option for a gaming laptop. Its GPU has the power for 1080p and esports gaming, and its Core i5 processor is fine for everyday use. Its SSD is quick, and the screen offers good quality.

Elsewhere, Acer’s machine has reasonable ergonomics and design – it’s not too thick or heavy.

Of course, the low price does mean compromise. The GPU is fine for 1080p gaming, but it’ll struggle with tough titles now and in the future. The Core i5 CPU isn’t great for tougher software, and we would have preferred 16GB of memory.

Similarly, panels in pricier portables have wider colour gamuts and better contrast levels, and it’s easy to find rivals that are slimmer, lighter and with better ergonomics – for a price.

A lot of people won’t be fussed about that, though, especially when the Acer is hundreds of pounds cheaper than rivals. If you’re after a good gaming laptop and don’t want to bust your budget, the Helios 300 is well worth considering.