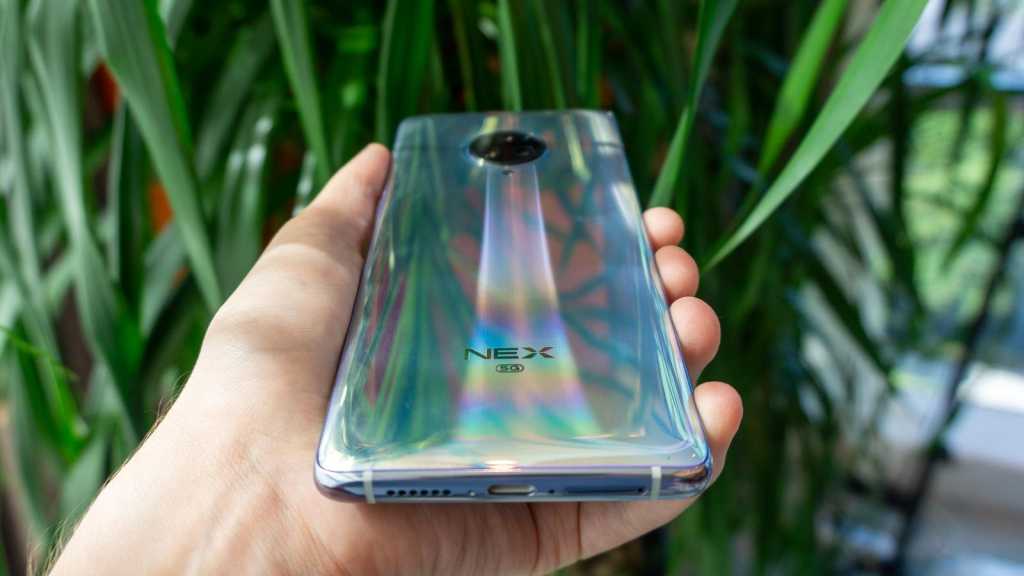 There’s not a lot to dislike about the Nex 3. Importers – especially in the US – are probably better off ditching the 5G and sticking to the regular 4G model, but beyond that this phone offers almost everything you might want from a 2019 flagship. The huge curved panel is beautiful, the battery is banging, and the internal specs rival just about any other phone on the market. The only real letdowns are the lack of waterproofing, an occasionally clunky operating system, and a camera that’s good but can’t quite keep up with the best out there.

The Vivo Nex 3 is the company’s first foray into 5G as part of its Nex line, and it’s going all out, with headline-grabbing specs from the display to the cameras, together with novel design choices like ditching physical buttons (almost) entirely.

With a design that’s reminiscent of Huawei’s Mate 30 Pro – announced just a week after the Nex 3 – it’d be easy to overlook Vivo’s phone, but with a notchless display and Google app support, this might have the edge on the Mate in at least some respects.

The Nex 3 is available to buy now, but only in China and select other Asian markets – there are no plans for any western release, so don’t hold your breath waiting for one.

Still, that doesn’t mean you can’t buy it – like most other Chinese phones, it’s  easy enough to import. You can find the Vivo Nex 3 on grey market import sites like Aliexpress and Banggood. Prices vary, but at the time of writing are typically around £700/$800 for the 4G model with 8GB RAM and 128GB storage and more like £800/$900 to jump up to 5G, which also ups the storage to 256GB.

Those prices are for the global ROM versions – essentially models shipped to Asian markets outside of China – which means it should ship with Google Play services pre-installed, just like any phone in the west. There is also a 5G model with 12GB RAM but we can only find that in a Chinese ROM, which means no Google services (or apps) out of the box. You can get around this using the same method as for the new Huawei phones, but it’s an extra bit of hassle – and risk of problems down the line – that we’d recommend avoiding if you can.

The first thing that’s likely to catch your eye on the Vivo Nex 3 is the curved screen, which runs almost all the way to the top and bottom bezels while wrapping most of the way round the sides – with noticeably more curve than even the Galaxy Note 10. It’s a beautiful visual, though this is undeniably hitting the limits of usability when it comes to curves.

It’s what Vivo is calling a ‘Waterfall FullView’ display, and the company claims it delivers a 99.6 percent screen-to-body ratio. I’m not quite sure how it reached that number – those top and bottom bezels, while incredibly slim, look like more than 0.4 percent of the phone to my eyes – but either way this phone offers more screen than just about any other out there.

The 6.89in panel is POLED (i.e. plastic OLED) with a glass layer on top, with a FHD+ resolution of 2256×1080 – not hitting QHD is one of the few compromises here. The panel itself comes from Samsung, and is pretty gorgeous in use, with especially bright, vivid colours. I’m used to using the OnePlus 7 Pro – which packs one of the best screens around – and the 60Hz refresh rate is really the only thing that lets the Nex 3 down in comparison.

The extreme curve isn’t just for show either. Vivo has built in a few software features to take advantage of the edges, such as a pulsating graphic that plays along the edge while music is playing and the screen is off (only in Vivo’s own music app though, not Spotify and the like), or alerts set up for when you receive calls – so that even with the phone face down on a table you can still see an incoming call.

Palm rejection software does its best to mitigate the main annoyance of curved screens, and is probably the best I’ve ever used – I don’t think I’ve had a single accidental touch registered in almost two weeks of using the phone. The added curvature here creates another problem though: buttons. There’s just not the space for physical buttons – and besides, they’d ruin the sleek effect – so Vivo has instead built in capacitive pressure-sensitive buttons for power and volume, with haptic feedback to let you know when you’ve hit them. Sensibly there’s a ribbed section for the power button to help you find it without looking, and the volume controls sit above and below so they’re easy to activate too.

It’s tech that the company demoed in the Apex 2019 concept phone, but put into a retail phone for the first time in the Nex 3. Once you learn the spots to hit (aided by some subtle on-screen prompts) the ‘buttons’ are surprisingly easy to use, and you can customise the pressure for each individually to help avoid accidental touches. In one change from the Apex, Vivo has also thrown in a small physical power button along the top edge of the phone, for those worried about the touch buttons failing if the phone ever freezes.

It’s a much better setup than the clunky compromise in Huawei’s Mate 30 Pro, where you have to double-tap on the side of the screen to activate the on-screen volume controls, then slide up and down to change them. Vivo’s approach works even when you’re not looking, feels like a button, and covers power too – something Huawei didn’t quite dare to take off a real button.

The back of the phone looks almost as great as the front, with a reflective glass back available in two finishes: Liquid Galaxy or Glowing Night. Those are basically a silvery white and black respectively, and the former in particular picks up the light in some fairly pretty patterns.

Vivo has Samsung to thank for more than just that curved panel: the Korean giant also supplies the 64Mp camera sensor that’s the star of the Nex 3’s triple rear camera setup. The f/1.8 shooter follows phones from Xiaomi and Realme with the same OTT megapixel count, but remember that between pixel binning and sensor sizes there are limits to the benefits you can expect from the extra Mp.

Still, the Nex 3’s main lens is impressive, with vibrant colours and about as much detail as you’d hope for given the pixel count. Colours do run slightly on the over-saturated side unfortunately, so true-to-life isn’t quite what the Nex delivers, though its’ far from the worst in that respect. There’s a good dynamic range though, and it handles low and difficult lighting without too much loss of detail. There’s a dedicated Night mode too, which is competent but far from the best out there.

The main lens is joined by 120-degree wide-angle and 2x telephoto lenses (both 13Mp), the latter of which will let you get as far as a blurry 20x zoom with some digital help. Thanks to smaller apertures you don’t see quite the same dynamic range from either of these, but there’s minimal distortion on the wide-angle at least.

Finally, to keep the display uninterrupted Vivo has opted for a 16Mp pop-up selfie camera, which slides out in a wide apparatus that includes its own flash light – and the option to have it play a slightly annoying sound effect every time it does so. I quickly turned that off. Otherwise, it’s a solid selfie cam that highlights one of the camera apps biggest annoyances: an AI facial recognition that has a beauty mode on by default. A beauty mode that includes 13 distinct sliders and no way to turn it off except by turning off every single slider individually.

All in all, the Nex camera setup is good, but not as good as the on-paper specs might suggest – a healthy reminder that most of the best smartphone cameras right now are driven by larger sensors (and not just more pixels) and arcane algorithms. Still, this is a camera that will more than meet most people’s needs even if it’s not quite best-in-class.

With all that fuss over the display and the camera, you’d think Vivo might have skimped on specs, but if anything it’s the opposite – the company has gone all out to keep up.

For starters there’s the new Snapdragon 855 Plus chipset, currently the most powerful on the market for Android devices. It’s joined by either 8GB or 12GB  of RAM and 256GB of UFS 3.0 storage. Between all that the phone runs seriously smoothly, and should happily keep up with demanding streaming, or the latest Android games or video rendering needs.

That carries through to our benchmark results. As you’d expect, our review model – the 8GB/256GB configuration of the Chinese ROM – holds its ground against all the biggest flagships from the second half of 2019 so far, even outperforming some on the more intense graphical tests. This is one of the most powerful phones in the world right now from a pure performance perspective, and should comfortably hold up for years to come.

The 4,500mAh battery comfortably lasts a day and just about stretches to two – the Nex 3 managed 13 hours in our battery test, beating even the 6,000mAh ROG Phone 2, though I’d say the real-world performance has been strong, but not quite as phenomenal as our artificial benchmark shows, suggesting some unusual optimisation at work. Charging is a breeze though – the 44W fast charging topped the phone up to 68% from empty in just 30 minutes, which is amongst the fastest we’ve seen so far.

There’s no wireless charging at all though, as the company hasn’t yet embraced the tech. There’s also no IP rating, though Vivo reps insist it has been tested for water and dust-resistance.

Connectivity is unsurprisingly solid, with NFC and Bluetooth 5.0, plus the aforementioned 5G if you opt for that model. There are six antennae across the phone to help improve the reliability of 5G connections, using the Sub-6GHz spectrums – the type most common in Asia and Europe, but not yet in the US, where mmWave is more readily available. That means European importers can probably expect typical 5G performance – though with the slow rollout of the service that isn’t saying much, even in a city like London – but if you’re in the US the Nex 3’s 5G model probably wouldn’t be a great choice.

The only other thing really lacking here is software. The Nex 3 ships with Android 9 – not 10 – and Vivo’s Funtouch OS is not quite as fun to use as the name would suggest. It’s not the worst, but with more bloatware than I’d like and some odd UI decisions – like moving the settings shortcuts to a swipe up from the bottom left, rather than above the notification tray – left me occasionally frustrated. Some of this may be better on the global ROM – there’ll probably be less bloatware and at least the Google stuff will come pre-installed – but even so the OS is the main thing that keeps me from feeling like I could switch over, say, the OnePlus 7 Pro.

There’s not a lot to dislike about the Nex 3. Importers – especially in the US – are probably better off ditching the 5G and sticking to the regular 4G model, but beyond that this phone offers almost everything you might want from a 2019 flagship.

The huge curved panel is beautiful, the battery is banging, and the internal specs rival just about any other phone on the market. The only real letdowns are the lack of waterproofing, an occasionally clunky operating system, and a camera that’s good but can’t quite keep up with the best out there.