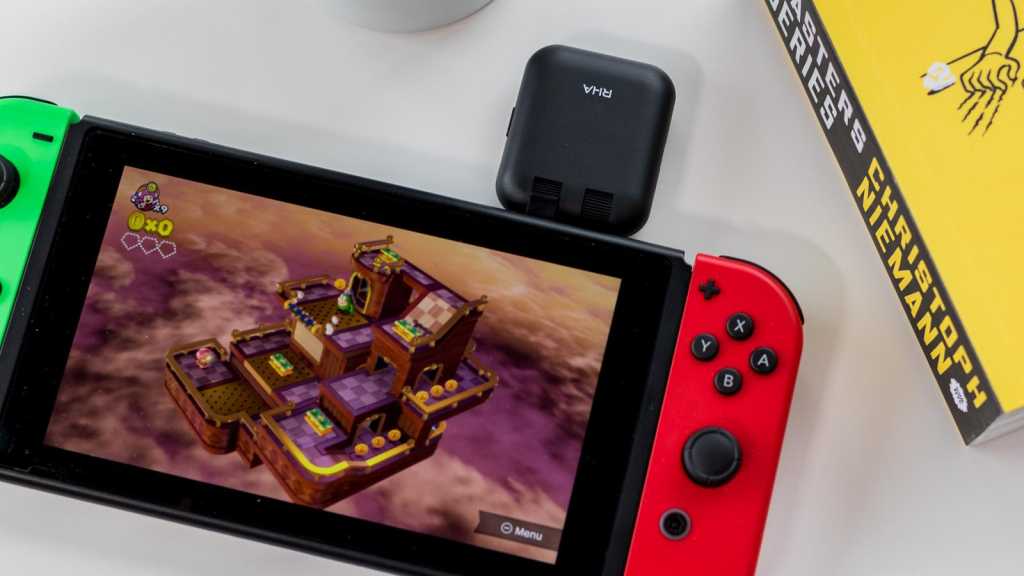 In a sense this is a very simple review: the RHA Wireless Flight Adapter does what it says on the tin, and it does it well. We’d love to see a slightly slimmer design that’s better suited to the Switch, but beyond that there’s really not much to complain about here.

Wireless headphones are officially a thing (sorry, headphone jack fans). That is, everywhere except on planes. And, thanks to the wisdom of Nintendo, on the Switch. Enter RHA’s Wireless Flight Adapter.

This dinky little dongle plugs into the headphone port on your Switch, plane seat – or any other wired-only device of your choice – and will let you pair with Bluetooth headphones (or a speaker – though that’s not recommended on an economy flight).

Here’s how it works, and whether it lives up to that promise.

There’s probably a limit to how much people are willing to spend on a Bluetooth adapter for flights, so smartly RHA has kept prices friendly: you can pick one up for just £39.95/$49.95.

You can buy it directly from RHA, or from Amazon.

Naturally it’s also the perfect excuse to upgrade the rest of your audio – especially if you want noise-cancelling headphones to eliminate the other annoyance about in-flight audio. Check out our guides to the best headphones and the best true wireless earbuds for a few options.

The Wireless Flight Adapter’s design is understandably functional, but that’s no bad thing. It’s a compact little box that weighs just 23g, and could comfortably fit inside most headphone or Switch carry cases, or even just in your pocket.

That’s also important because it means it won’t jut out too much from a plane’s armrest audio connectors and risk getting knocked about, though it does still stick out fairly noticeably from the headphone port of the Switch.

There’s a single button – used for power and pairing – and a USB-C port for charging charging. Otherwise, it’s basically just a black box interrupted by the two gold-plated 3.5mm connectors.

There are two jacks to guarantee compatibility with planes that still use the two-prong socket, but each folds out separately, so if you only need a single jack at a time then you can keep the other tucked safely away.

Each jack has a grippy, textured edge to help you pull them out quickly, and will lock into position either parallel or perpendicular to the main body of the adapter so it’s more likely to sit comfortably in any plane setup.

The boxy shape is less well-suited to the Switch, as there’s no way for it to sit flush against the back of the body, and instead it sticks up from the top and has a tendency to swing around a bit in the jack. This doesn’t affect performance at all, but it makes the compact, pocket-sized design feel surprisingly bulky when in use.

There’s not all that much to say about the RHA dongle beyond this: it works. Y’know, really well.

It’s simple and quick to pair it to any pair of Bluetooth-enabled headphones, and the connection is immediate and reliable – I didn’t experience any lag or reliability in any of my testing (admittedly, all down on earth rather than mid-flight).

It’s all over Bluetooth 5.0, and if you’re using compatible headphones then you can also enjoy the benefits of aptX HD and aptX Low Latency – meaning high quality audio that should sync up perfectly with any video.

The flight adapter will remember up to eight paired devices – realistically more than you need – and even better, it will actually connect to two at once. That means that you can share audio to two sets of headphones simultaneously, which probably won’t be much use with the limited viewing angles on a plane screen, but is ideal for two-player Nintendo on the go.

With a 16-hour battery it should also last longer than most flights – though will admittedly fall short if you’re on the 19-hour non-stop slog between Singapore and New York, currently the longest in the world. It’ll also comfortably lap a Switch battery a few times over, and once you do need to charge it you just need any old USB-C charger to top it up.

In a sense this is a very simple review: the RHA Wireless Flight Adapter does what it says on the tin, and it does it well. We’d love to see a slightly slimmer design that’s better suited to the Switch, but beyond that there’s really not much to complain about here.