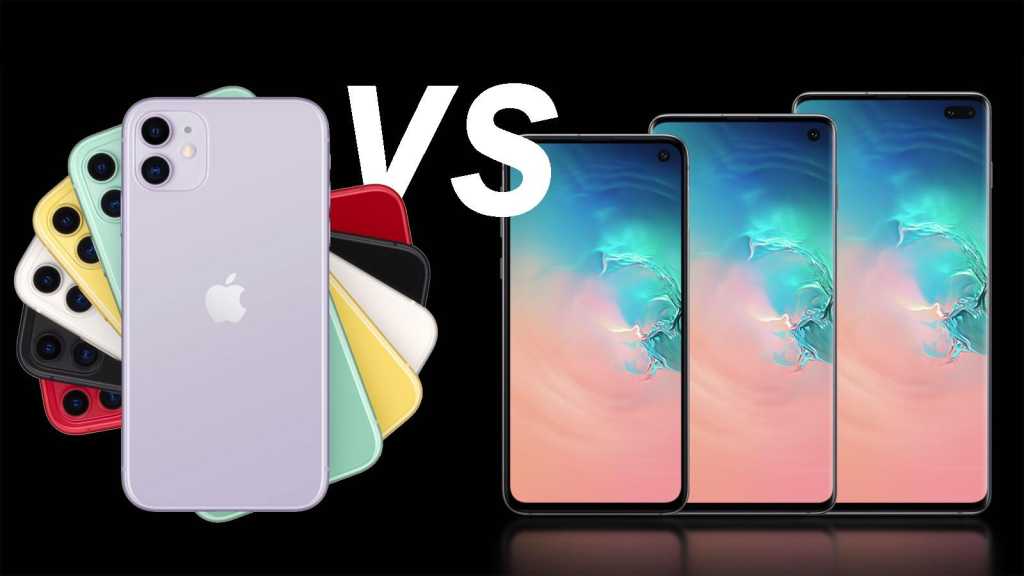 If you want an iPhone then the new 11 is a good blend of power, performance and features, at a price that is marginally lower than the iPhone XR it replaces. The addition of the wide-angle camera is good news for photography fans, while the A13 Bionic chip will no doubt keep things moving at a swift pace. All of Samsung’s S10 phones offer more for your money, with the three-lens camera arrangement providing even more scope than Apple offerings. Add to this the increased storage capabilities, slimmer design, plus superior display and you have the complete package.

The 2019 iPhones have arrived. Apple  announced the iPhone 11 as well as two Pro models. So, like last year there are three new phones to choose between. Samsung launched its range of Galaxy S10 phones earlier this year and because there’s now a 5G version (which Apple does not offer), there are four models.

We’ll explain how they all compare, and differ, so you have a much better idea of which one might be the best upgrade for you.

Apple has done a bit of rejigging in terms of how the iPhone naming conventions work this year. The new phones aren’t hugely different from last year, but rather than the XR, XS and XS Max arrangement that operated in 2018, we now have a standard iPhone 11 (which basically replaces the iPhone XR), then the iPhone 11 Pro and Pro Max (replacements for the XS and XS Max).

Prices are as follows:

If you want to go down the Pro route, then this is what you’ll need to pay:

All devices are available for pre-order from September 13 with the release date set at September 20. Be sure to read our Best iPhone 11 deals guide to see what offers you can find.

Samsung’s Galaxy S10 lineup is just as confusing. The current range is comprised of the S10e, S10, S10+, and the S10 5G. Of these, the S10e is the most comparable to the iPhone 11 as it has dual cameras, the same processors as the higher-end models and the lowest price.

Here’s how the Galaxy S10 prices break down, but note these are the recommended prices. You will find the phones cheaper if you shop around online.

You can buy any of the Galaxy S10 devices directly from Samsung or from retailers such as John Lewis, Amazon, Best Buy, as well as across pretty much all the mobile providers. Also take a look at our Best Samsung S10 deals to make sure you don’t miss out on any bargains.

As you would expect from the devices that dominate the premium smartphone market, both of these handsets are a class act. Apple has mainly stuck with the design of the iPhone XR for the new iPhone 11, adding only twin cameras to the rear, IP68 waterproofing (a step up from the IP67 of the previous model), and a few new colours.

With the S10, Samsung has taken the curved 5.8in AMOLED Infinity-O display of the Galaxy S9 and pushed it to 6.1in, removing the upper bezel in the process. This is achieved by using a punch-hole aperture for the front facing camera, which we guess is now the Samsung version of the Apple notch, but however you consider it, it’s less noticeable.

The display also houses an embedded ultrasonic fingerprint sensor under the glass, negating the need for one on the rear.

In the hand, the S10 is notably slimmer and lighter than its Apple counterpart. While the iPhone 11 has a slightly taller display, with a 19.5:9 ratio as opposed to the 19:9 of the S10, it does seem to come with plenty of bulk as you can see from the dimensions below.

This becomes more impressive for Samsung when you consider that the S10 includes an extra camera lens too, with the rear panel boasting a triple-lens arrangement. The Korean company even found space for the humble 3.5mm headphone jack (something which departed Apple’s shores back with the iPhone 7), all while maintaining an IP68 waterproof rating.

With prices up past the £700/$700 mark, you have every right to expect the components in these devices to be top-notch. Thankfully, for the most part, they are exactly that. Apple has upgraded the processor in the iPhone 11 to the new A13 Bionic which also features on the Pro models. Samsung matches this by deploying either the latest Qualcomm Snapdragon 855 (US) or Exynos 9820 (Europe), both of which are hugely powerful chips.

Storage options are where the models are more easily differentiated, with Apple offering three choices (64GB/128GB/256GB) while Samsung has two (128GB/256GB) but with the ability to add up to 512GB via microSD cards.

The iPhone Pro and Pro Max both offer 512GB options, but again Samsung bests this with the S10+ 1TB model (in the US) that also includes the 512GB microSD option, so it can be maxed out at an incredible 1.5TB.

Apple has decided to reserve its premium display panels for the Pro range, which means the iPhone 11 comes with an LCD IPS panel rather than the OLED ones found in its well-heeled siblings. This is perfectly fine, as Apple has always done a great job of calibrating its LCD panels, but it just doesn’t match the silky richness of the dynamic AMOLED panels that adorn the S10 range, even on the S10e.

The curved edges of the Infinity-O display gives the S10 a thoroughly modern appearance, and also adds the slide-out side menu feature that is a great way to jump to apps.

In the resolution stakes Samsung wins again, as the S10 runs at 3040×1440 with a pixel density of 550ppi. This compares favourably to the 1792×828 of the iPhone 11 which only manages 326ppi. That being said, both look great and will make most users happy.

The iPhone 11 sees the additional of a new camera to the single shooter that came with the iPhone XR. Now there’s an f/1.8 Wide-angle and f/2.4 Ultra-Wide-angle onboard.

Video goes up to 4K @ 60fps with stabilisation and there’s a new feature that allows you to quickly capture footage by pressing and holder the shutter button rather than having to switch to video mode. Apple also includes an audio zoom feature now, which acts as a sort of virtual unidirectional microphone, focusing on the subject’s audio rather than capturing the general noise.

The front camera also has 4K video for the first time, plus support for slo-motion selfies that Apple is regrettably calling Slofies. Good lord.

Samsung continues the trend of going one better by including not two but three lenses in the S10. These are a 12Mp Telephoto f/2.4, 12Mp Wide-angle variable aperture f/1.5-f/2.4, and 16Mp Ultra-Wide f/2.2. Again these record up to 4K @ 60fps and feature stabilisation.

However, to compare like with like, it’s fairer to look not at the S10 but the S10e which has a wide and ultra-wide combination comparable to the iPhone 11. The Wide camera features a mechanical variable aperture that gives it more flexibility than the Apple camera. There’s also the fact that the phone itself is shorter and slightly slimmer than the S10 too, mainly due to its 5.8in AMOLED display, and costs less than both the iPhone 11 and S10.

Should you require a triple-camera combination, then the iPhone Pro and Pro Max have you covered.

Here’s a full breakdown of the technical specifications for the iPhone and S10 range.

Apple includes the new iOS 13 with the iPhone 11 and Pro models, which includes a new Dark Mode, Portrait mode enhancements, increased photo and video editing features, Memoji customisation options, plus plenty of other polishes to Apple’s own apps.

See our sister site Macworld’s  complete guide to iOS 13 to read about all of the new features on offer.

Samsung uses its One UI interface on top of Android 9 Pie, which is a good combination. It’s a well-designed, pleasant environment that still has the huge customisation options that make Android so popular with many people. When it will get the new Android 10 update is unclear, as Samsung traditionally drags its feet in this regard, but we’re sure that it will eventually find its way to the S10.

Both are mature and powerful operating systems that offer pretty much everything you could want for modern smartphones.

Apple has played it safe with the iPhone 11, giving just enough of what people want in terms of power, performance, and features. It’s a solid if uninspiring update but not one that will have iPhone XR owners clamouring for an upgrade.

On the other hand, the S10 has a better display, three cameras, beefed up hardware, and all while keeping a svelte chassis and offering a 5G model for those that want to get the fastest mobile data. We must now assume Apple isn’t going to have a 5G-capable phone until September 2020. With prices of the Galaxy S10 sure to drop quicker than with its Apple rival, Samsung’s offerings certainly look like better value if you don’t have to have iOS on your phone.