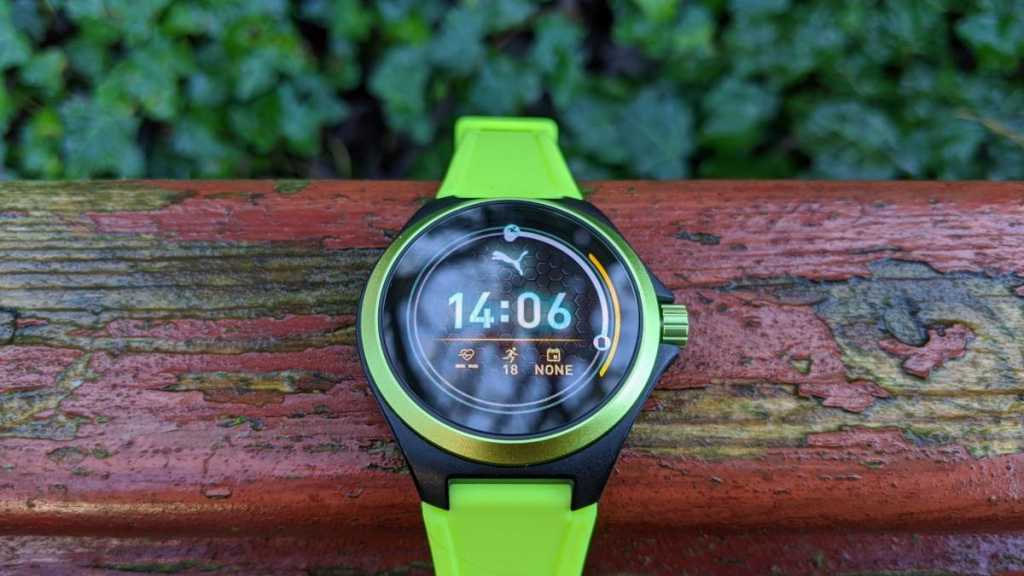 On the surface, the Puma Smartwatch makes for a nice change compared to so many chunky Wear OS devices on the market. It’s compact, lightweight and attractive. However, it falls down on performance and tracking so paying for the brand name really isn’t worth it here.

As you might know Fossil works with a number of fashion brands to create a huge range of smartwatches. They include Diesel and Armani but now the firm has teamed up with Puma for a sporty smartwatch. It’s certainly lightweight and attractive but has some issues holding it back.

That’s cheaper than the Fossil Gen 5 which sounds good but you’re getting much better specs with Fossil’s own-brand model.

It’s also more affordable than the Samsung Galaxy Watch and Apple Watch but it’s worth bearing in mind that the Fossil Sport, although its from last year, has similar specs and is only £219.

Check out our chart of the  best smartwatches.

The Puma Smartwatch has a similar design to the Fossil Sport. It comes in three colours – black, white/rose gold and neon (you can decide whether it’s yellow or green).

We like the retro style of the watch, but it’s perhaps a little too plain for some and there isn’t even a Puma logo on the front so people can see the brand. There’s a subtle one on the strap, the end of the crown and the custom watch faces though.

The Puma has a 44mm case which is made from a combination of nylon and aluminium and is extremely light. At 28g it almost feels like a dummy or a kids toy. However, if you want something to feel like it’s hardly there, especially when running, then this is a great choice and makes a nice change from the countless chunky designs out there.

There’s little else to speak of really with a 5ATM rating – so it can survive up to 50m of water – and a single crown on the side. We’re happy to report this isn’t just a button, but rotates so you can scroll through the interface.

Considering the Puma Smartwatch is much newer than the Fossil Sport and is more expensive, we were hoping it would have better specs.

Similar to the Gen 5 would make sense and while the Puma is powered by Qualcomm’s Snapdragon Wear 3100 processor, it’s limited to 512MB of RAM and 4GB of storage. That’s pretty normal for a Wear OS smartwatch but we want more.

As we’ve found with the Gen 5, the memory in particular makes a huge difference in how smoothly everything runs.

However, the watch was almost unusable at first – to be fair it was still installing apps etc following the setup process but that’s not a good experience for someone new to Wear OS. Things do settle down after this and the interface is largely pretty responsive, but apps don’t exactly load quickly often taking a good few seconds.

One difference compared to some other Fossil devices is that it doesn’t have a speaker. There’s still a microphone so it can hear your voice but you won’t get a response from the watch or be able to receive calls on it or listen to music. This isn’t a big deal for us, but we merely point it out in case you’re bothered.

You’ll use the Puma via its 1.19in screen which uses AMOLED technology and offers a decent 328ppi pixel density. This is very similar to most smartwatches and things look really nice on the display; using it outside wasn’t an issue thanks to a sunlight boost feature.

We do think the screen could be bigger at possible 1.3in since there’s a reasonable black border around it before you get to the metal bezel.

You get some decent specs elsewhere such as NFC for Google Pay, GPS for accurate tracking and a heart rate monitor. There are also sensors like an accelerometer and altimeter.

That’s decent, especially for the lightweight and compact design. However, there’s a couple of issues which stop the Puma being a slick wearable.

Since the device is aimed at sporty types, it’s a shame (to put it lightly) that the GPS takes far too long to lock onto a signal – often needing a few minutes before you can set off on your run. This isn’t the case when you compare it to the likes of the Apple Watch and Fitbit models with GPS.

Being Wear OS, Google Fit is the main fitness app being pushed but it won’t quite work for everyone. It’s Move Minutes and Heart Points might be a little simplistic for those wanting more detailed information so look to other apps.

Battery life is quoted at 24 hours and we’ve found that to be typically the case. Of course, it depends what you’re doing with it each day and whether you have features like background heart monitoring switched on. A day of general activity tracking (no workouts/runs etc), notifications and the like meant we had around 50% battery left at the end of day.

However, take the Puma out on a run or two and you’ll almost certainly be charging it every night. The charger, although a fairly weedy design, connects well and rapid charge means you can get to 80% in 50 minutes – ie in your lunch break.

The other good news is that you can choose from different battery modes such as Daily, Extended and and Time Only. They do as you would expect, plus you can set a custom one which has a large range of settings so you can choose what features you need the most.

We like the Puma Smartwatch from Fossil thanks to its lightweight and compact design. And in theory, it has decent specs and features inside that small chassis.

However, when it comes down to it, the Puma doesn’t execute well on the important stuff. Namely that performance can be laggy and the GPS has real trouble finding a signal.

Battery life can be reasonable depending on your usage but those wanting a sport focused smartwatch should probably look at the Apple Watch or a Fitbit. You’re largely paying for the Puma name here.