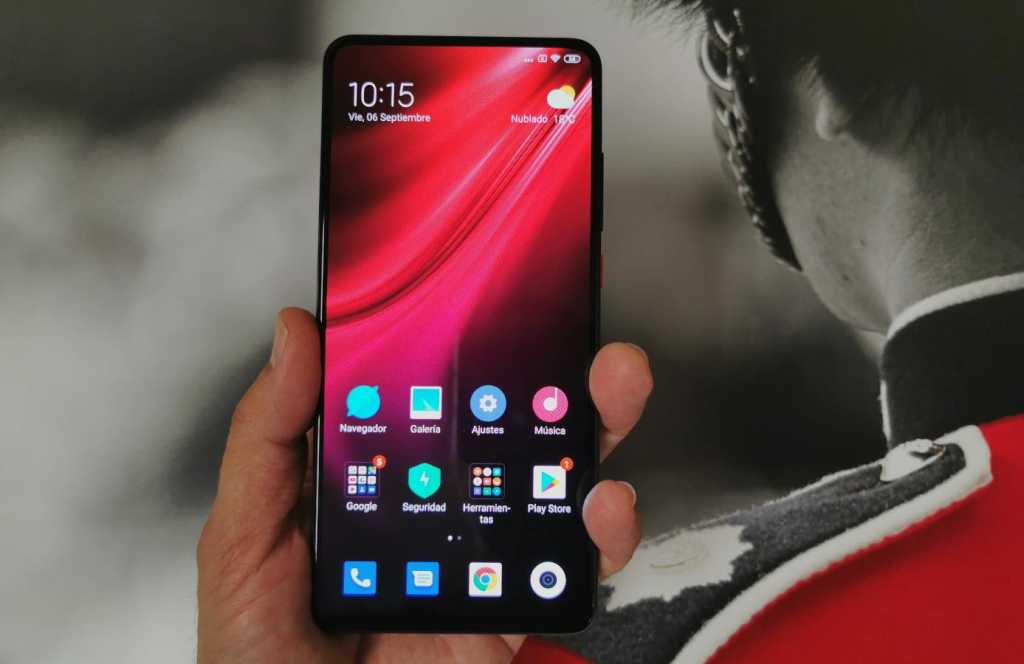 At £100 less than the Mi 9, the Mi 9T Pro is an impressive phone with the same flagship processor inside and a quirky pop-up camera that allows for a truly full-screen display.

Xiaomi’s mid-range Mi 9T impressed us with its careful balance of quality components, excellent design, and a tantalising price. The Pro version has since been announced in the UK and Europe, swapping out the Snapdragon 730 for a flagship Snapdragon 855 processor, and building in a graphite cooling system and 27W fast charging.

Where to buy Mi 9T Pro in the UK

It’s closer now than ever to its big brother, the flagship Mi 9, yet it costs £70 less at £399 direct from Xiaomi.

You can also source this phone through GearBest, which currently lists the 128GB version for £287.82 in Carbon Black, Flame Red or Glacier Blue.

Identical in design to Mi 9T, the Pro is virtually all screen. This is a high-quality AMOLED panel measuring 6.39in, and thanks to a pop-up selfie camera it is unblemished, resulting in a screen-to-body ratio of 91.9%.

The Mi 9T Pro feels good in the hand, with a fingerprint sensor built directly into the screen itself. You can also use the selfie camera to implement facial unlocking.

Curved edges at the rear lend themselves to an elegant design and make the Pro instantly recognisable as a Mi phone. The rear camera assembly barely protrudes from the body, though if you use the supplied case you won’t notice this in any case. Without the case the Pro can be a little slippery. 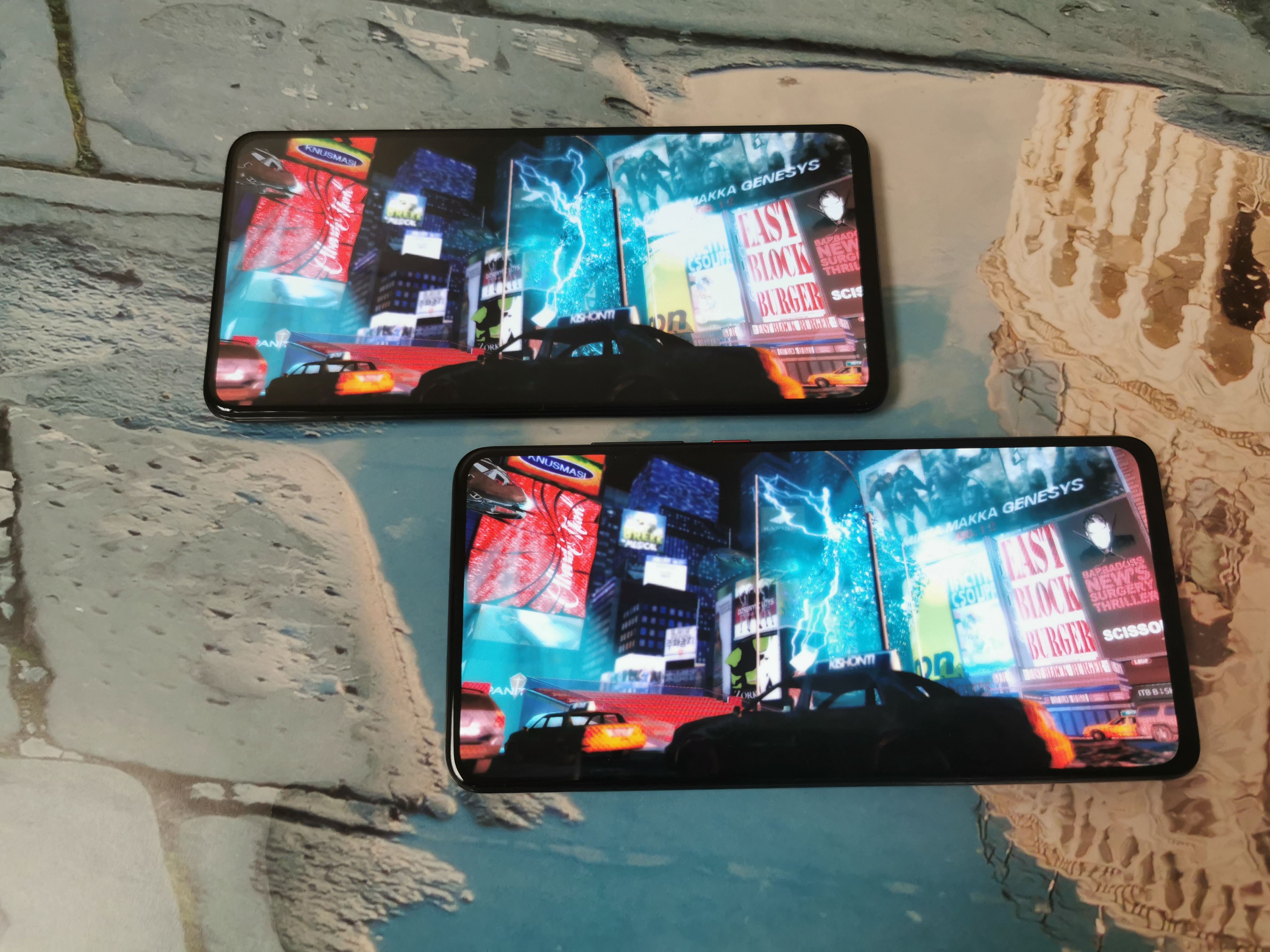 Something we loved about the Mi 9T, which is also present on this Pro version, is its inclusion of a 3.5mm headphone jack. Looking around the chassis you will also find a slot-loading SIM tray and USC-C connector.

The battery is generous at 4,000mAh, though this does add weight to the device. It’s 8.8mm thick and 191g, so you’re going to notice it in a pocket.

In common with all Xiaomi phones the Mi 9T Pro maxes out at a Full-HD+ screen resolution of 2340×1080 pixels. Stretched over 6.39 inches, this results in a sharp pixel density of 403ppi.

Compared to the recently announced (again, in Europe only) Mi A3, which has a HD+ screen with a 1560×720-pixel resolution, the difference is immediately clear. 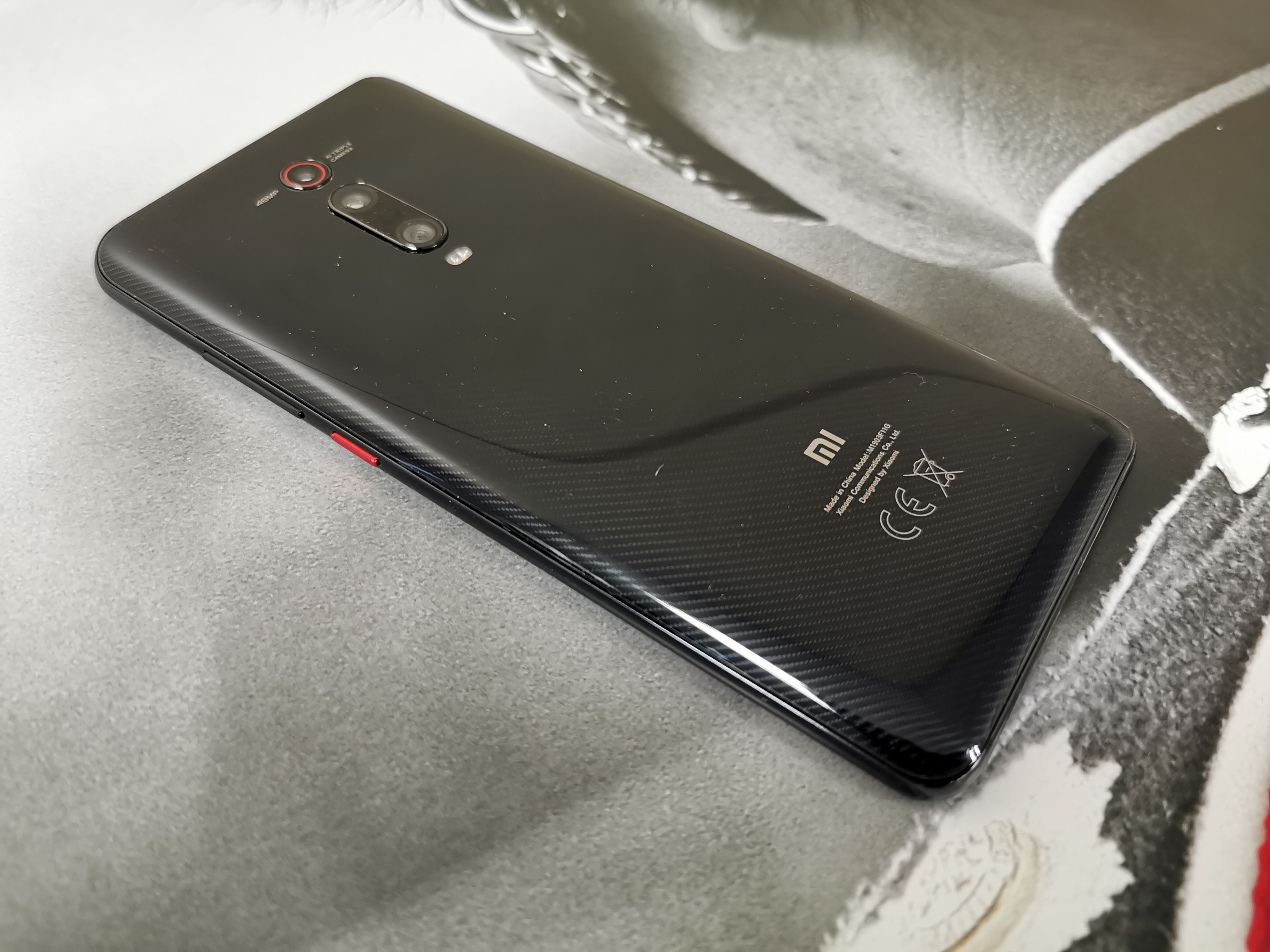 With the processor the key difference between this and the standard Mi 9T, it’s interesting to see how the two phones compare in our benchmarks.

We found the Snapdrgaon 855 selected here promised a real, measurable performance boost over the Mi 9T’s Snapdragon 730. In Geekbench 4 we recorded a multi-core score of 10,578 points for the Pro, against 7,018 for the standard. 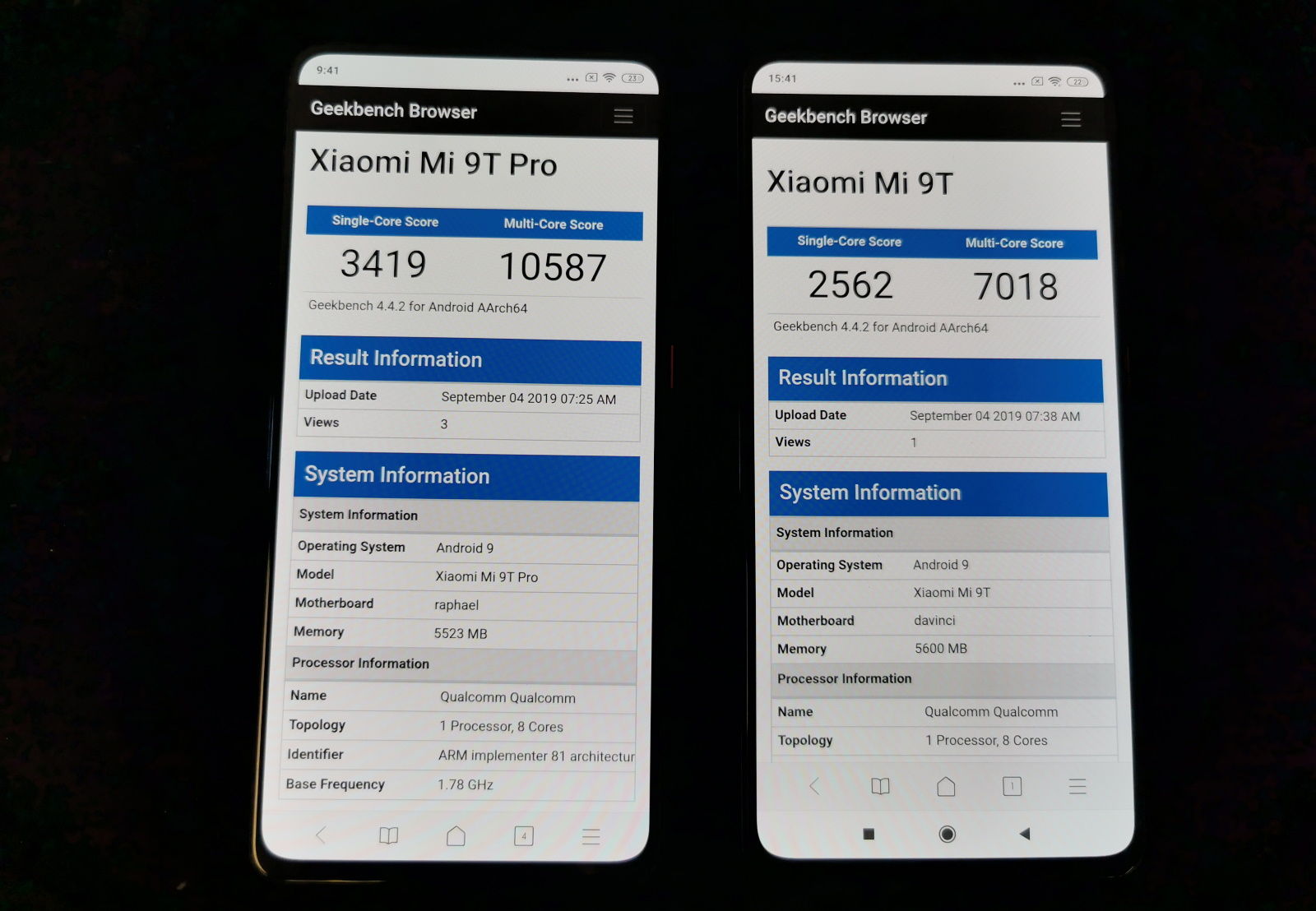 In a real-world scenario the difference was less noticeable, of course. Launching apps and navigating the menus seems all very similar, which is likely thanks to a slick operating system.

If smartphone gaming is your thing, the Pro version is a must. Not only does it have a faster processor and upgraded graphics, there’s an eight-layer graphite cooling system to help dissipate heat inside.

One of the advantages of the Mi 9T Pro over the standard model is its support for faster 27W charging. However, the charger supplied in the box maxes out at 18W, so if you want to take advantage you’ll have to put your hand in your pocket and buy a faster adaptor.

Supposing you had a 27W charger to hand, you should see the Pro charge from zero to 60% in half an hour.

Despite its flagship processor this remains a mid-range phone, so it’s no surprise that the wireless charging of the Mi 9 has not filtered down the line. 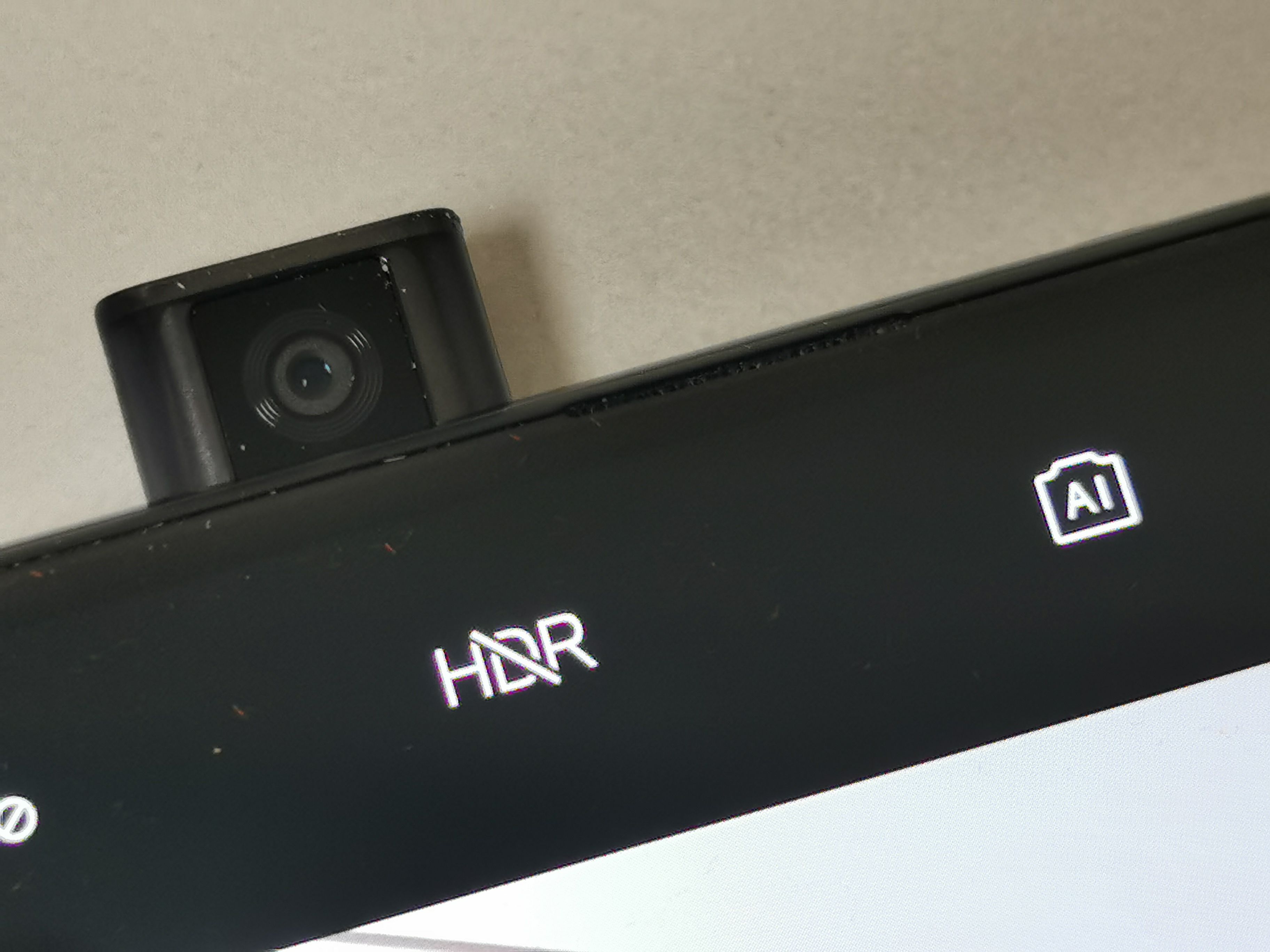 You’ll find the same triple-lens AI camera as that of the Mi 9T here, which means a primary 48Mp Sony lens that is accompanied with an 8Mp telephoto lens and an ultra-wide 13Mp lens.

It is able to capture a huge amount of detail, but in reality you’ll see better pictures if you allow it to use pixel binding technology to combine four pixels into one – though it is possible to capture at 48Mp, it’s unlikely that you actually need a photo of this size.

The camera app is intuitive, with various modes and filters offered. In fact it’s exactly like what you get on Mi 9T.

The Pro delivers slightly better white balance, and a little extra detail in low-light, but the differences here really are small. 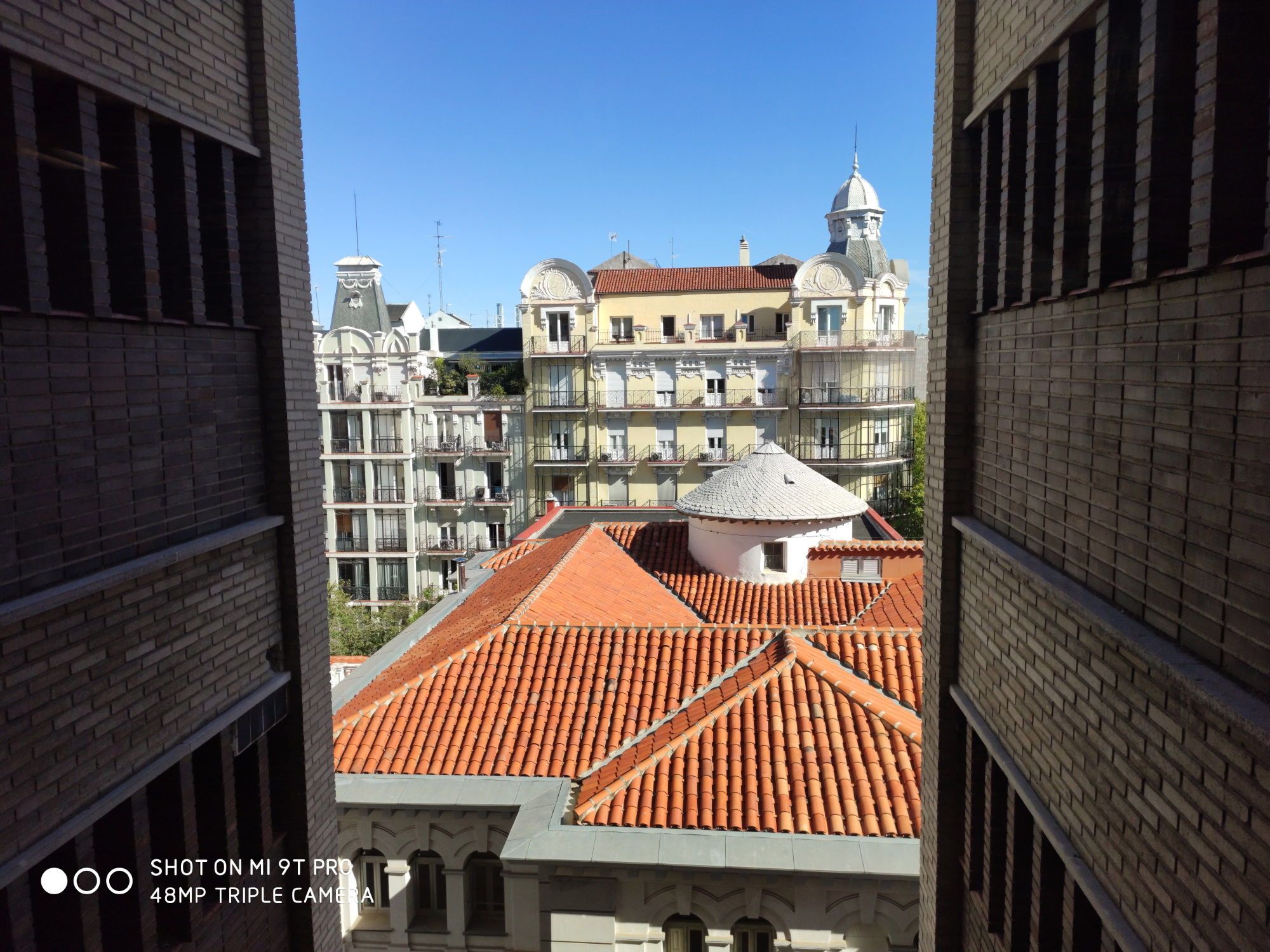 The selfie camera is worth noting, too. This is the same that is found in Mi 9T, which uses a reasonably quiet but still grating mechanism that Xiaomi says is good for 300,000 cycles.

We have the same concerns with this camera as we did on its brother, primarily in the fact it takes much longer for the camera to spring into action and be ready to take a shot, and it will automatically retract when you preview the shot, even if you’re not done with the camera just yet.

We’re fans of MIUI, especially with its features such as a system-wide Dark Mode, which didn’t come into effect in standard Android until the most recent Android 10.

You’ll also find unique features such as the ability to run dual apps and set up a second space on the phone, as well as an option for gesture navigation. 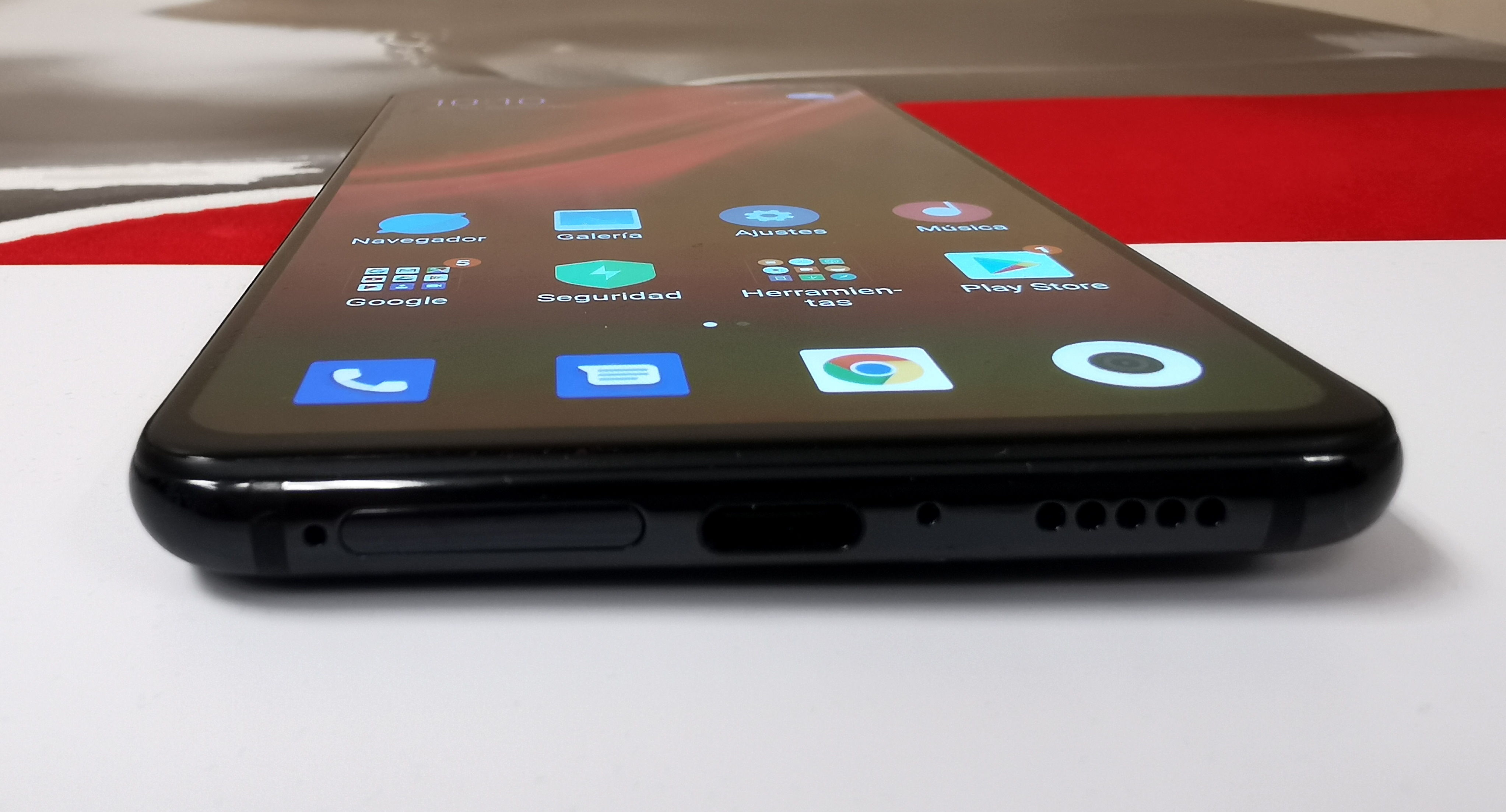 If performance is everything, for a small amount of money over the standard Mi 9T you’ll get a Snapdragon 855 processor, the same which is found in top-end phones such as Xiaomi’s own Mi 9 and the OnePlus 7. There’s also a generous 4,000mAh battery.

The Mi 9T scores points for its 3.5mm headphone jack and NFC functionality, and we love its all-screen design with pop-up selfie camera. The main camera is pretty decent, too.

If performance and gaming isn’t your bag, save yourself some cash and opt for the standard Mi 9T.

This review has been adapted from an original version by Alfonso Casas on our sister site PCWorld Espana.