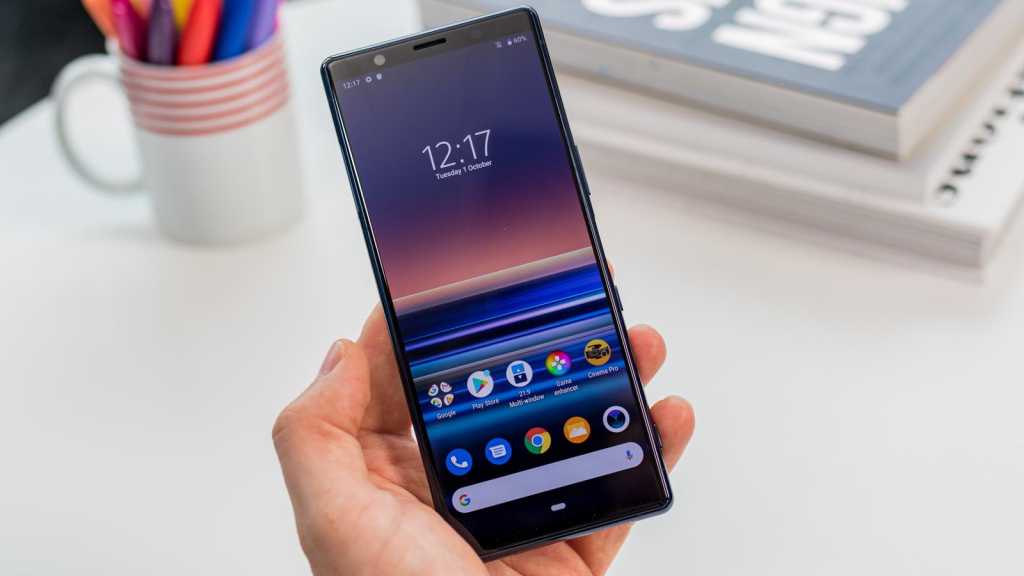 It’s hard to know what to think of the Xperia 5. It has a superb, cinematic screen, great stereo speakers and solid battery life. However, it’s badly let down by poor biometrics and some strange design choices. If you’re set on a widescreen display and watch a lot of films on your phone, you might be convinced considering its excellent performance. But for regular everyday use there are a number of better options, many of which are more affordable.

Announced at an otherwise quiet IFA 2019 for Sony, the Xperia 5 is a cheaper version of June’s flagship Xperia 1.

Sony has developed a clear strategy in an attempt to differentiate itself from the competition- focus on what it’s good at and fully commit to it.

In the case of smartphones, it’s a cinematic, immersive viewing experience which simulates a true widescreen TV. The 21:9 aspect ratio is natively supported by Netflix for many of its films, while stereo speakers and Dolby Atmos support aim to provide premium sound.

While Sony’s cameras are still used in Apple, Google and Huawei phones, their own handsets typically flatter to deceive in this area. We have seen in recent years just how much software determines image quality.

Even at a more affordable price, the Xperia 5 will likely live or die by the success of these two key aspects.

The Xperia 5 went on sale on 4 October, four months after its bigger brother, the Xperia 1. It comes in only one variant: a model with 6GB RAM and 128GB storage for £699.

While this doesn’t quite put it in the mid-range category, it does save you £150 over Sony’s flagship.

At this price point, it has to go head-to-head with the likes of the OnePlus 7T Pro and Samsung Galaxy S10e, two handsets we rate very highly. On the iOS side, the iPhone 11 is just £30 more at the time of writing.

The Xperia 5 understandably bears more than a few similarities to the Xperia 1. It retains the all-glass design, complete with identical triple rear cameras. All at 12Mp, the f/1.6 wide, f/2.4 telephoto and f/2.4 ultrawide offer great flexibility. There’s optical image stabilisation on the first two lenses, meaning on paper video performance should be strong.

With looser price restrictions on the Xperia 1, Sony was able to go for broke with the display. That has been reigned in a bit here, with a 6.1in, 1080×2520 display. Usually we’d say you wouldn’t notice the difference between this and the more expensive model, but it is a significant step down from the stunning 4K display on the Xperia 1. The unusual aspect ratio makes this a very tall and narrow phone, even more so than many 2019 flagships.

Sony has clearly researched the ergonomics of its phones, as the smaller Xperia 5 fits very comfortably in your hand. The glossy glass back means it is relatively slippery and a notorious fingerprint magnet, so you might want to consider a case.

There are some rather chunky bezels by 2019 standards, housing the earpiece and 8Mp front-facing camera in addition to an LED indicator. The 80.9% screen-to-body ratio does make the device look a little dated from the front, but this is a phone for the notch haters as opposed to those yearning for a bezel-less design.

However, it’s on the side of the device where some of the most interesting design choices have been made. The SIM tray is accessed by a built-in flap as opposed to the regular ejection tool, while the earpiece and downward-firing grille combine for stereo speakers. There’s a large speaker grille next to the USB-C charging port, which combined with the earpiece provide a stereo speaker experience.

We tested the blue variant, but you can also pick it up in black or grey if you’d prefer.

Despite the lower resolution, Sony’s displays are among the best on the market. The Xperia 5 provides a rich, vibrant OLED experience with accurate colours across the board. In theory, the 1080p resolution should help with battery life.

While we recorded a maximum brightness of 330 nits, it did struggle in direct sunlight, especially when compared to Samsung’s displays.

The Xperia 5 is powered by Qualcomm’s Snapdragon 855, a flagship chipset from the first half of 2019. Despite having since been replaced by the 855+, combined with an Adreno 640 GPU it had no problem blazing through everything we could throw at it.

Graphic-intensive games such as Asphalt 9 and Call of Duty: Mobile are particularly enjoyable, remaining smooth and lag-free throughout. Multitasking is also not an issue, with video content and word processing able to run concurrently without an issue.

Sony has included a built-in Game enhancer, which like many dedicated modes aims to reduce distractions and maximise your experience. It works well, giving you a more immersive experience, particularly when combined with the built-in Dolby Atmos.

There’s even DualShock 4 support, meaning you can use your PS4 controller to play games on-the-go.

However, this does appear to take a toll on the device, which gets noticeably hot after even just a few minutes of gaming. With no dedicated cooling mechanisms, it can become uncomfortable if you’re planning on a longer session.

As you can see below, the Xperia 5 was a good match for its competitors across the benchmark tests, showing that general performance is one of the areas in which it excels.

However, while they offer a direct comparison there is little insight here into their day-to-day performance. It will be hard to notice a serious difference in performance between these competing handsets.

There is only a 60Hz display here, which is worth mentioning considering the growing number of handsets which have stepped up to 90Hz. If you’ve tried the higher refresh rate, it’s hard not to miss it here, but this is far from a deal-breaker.

While this should help battery life, it’s impossible not to miss the higher refresh rate, particularly if you’ve tried something like a recent OnePlus Pro model.

The Xperia 5 runs Android 9 Pie out of the box, and while it’s confirmed to get Android 10 an availability date is yet to be revealed.

Sony’s skin is extremely light, so you’re getting a near-stock experience with just a few pre-installed apps. One of these triggers the multi-window, an aggressive push from Sony to get you multi-tasking more. This is with good reason too; the phone is over 15cm tall and can comfortably fit at least two windows at once, so there is plenty of real estate to play with.

This makes it almost impossible to use the device one-handed, so Sony includes a feature called Side sense. Activated by a double tap or swipe down on the side of the screen, this aims to make those hard-to-reach apps more accessible.

However, we found it very frustrating to activate, and in the end just gave up and resorted to two-hand usage. We wish Sony had baked more of these features into the OS, as Samsung has done with One UI.

In addition to the regular Wi-Fi and 4G connectivity, the Xperia 5 has Bluetooth 5.0, so you’ll be free to play audio to two devices simultaneously, among other things.

There is only one biometric option for unlocking the phone – the side-mounted fingerprint scanner. This is almost too natural a position as it’s where you naturally grip the device, leading to a number of unintentional attempts. We regularly got locked out and had to resort to entering the passcode.

Despite registering the same fingerprint twice, it was still very hit and miss. It regularly struggled to unlock, and was particularly intolerant of even the slightest amount of moisture. Despite an 8Mp front-facing camera, there is no disappointingly no option for face unlock.

A patent issue meant Sony couldn’t implement the power button into the fingerprint scanner, but it has inexplicably chosen to put it on the bottom third of the device. This makes it very awkward to reach as you have to physically adjust your grip each time.

Despite these shortcomings, the Xperia 5 has retained a number of premium features from the Xperia 1 that help it to really feel like a high-end device. Google Pay is encouraged thanks to the built-in NFC, while the built-in microphones feature noise cancellation for a premium audio experience.

The stereo speakers, complete with Dolby Atmos, provide a premium audio experience that few phones match. Despite many music streaming services maxing out at 320kbps, there is a noticeable performance difference.

Sony has joined the 2019 trend of triple cameras, with wide, ultrawide and telephoto offering great flexibility for shooting. The Xperia 5 is particularly great at large, imposing subjects, and in good light you will get excellent results.

Sony’s camera software aggressively pushes towards AI; you can see it constantly adjusting depending on what you see in the viewfinder. There is a tendency towards warmer tones, with vibrant and punchy colours.

Selfies are also a pleasant surprise, with a good level of detail in both the subject and background. It does begin have exposure issue when directly exposed to bright lights, but that’s to be expected.

One area where the camera falters is low light, as without a dedicated night mode it struggles for dynamic range and detail. While the camera recognises night scenes and brightens the image, it is lacking in sharpness and cannot be compared to something like Google’s Night Sight.

Check out some more samples below. You might need to click on the gallery to view it.

While this doesn’t quite rival the likes of the Google Pixel 4 or Apple’s iPhone 11, it’s a very impressive camera in its own right.

On the video side, the Xperia 5 offers recording in 4K up to 30fps. While this was impressive in testing, Sony do warn you that the phone may get hot and automatically close when in this mode.

This can be tweaked by the latest iteration of Sony’s Cinema Pro app, giving you more in-depth video controls and the option to create multiple projects with different settings.

On paper, the Xperia 5’s 3140mAh battery is a little underwhelming, especially considering it is a significant step down from many of its competitors.

However, the 1080p display means battery life is still solid, lasting well over a day with our moderate usage. In Geekbench 4’s battery test, we recorded an above average 9 hours and 5 minutes. It’s not something you’ll have to worry about day-to-day.

The 3140mAh battery is average at best, a significantly smaller capacity than many phones at this price point. However, the lower resolution screen means

There’s no wireless charging, although an 18W fast charger is included in the box. If you need a quick boost, we were able to get 53% of battery from off in just 30 minutes. However, do note that the cable is USB-C to USB-C, so you won’t be able to get a boost from the regular adapters.

The Xperia 5 is an attractive smartphone which excels in a few key areas, but it’s hard to know who to recommend it to.

At £699 it’s not a mid-range phone, while for just £150 more you can get the fully-fledged Sony experience. If you can’t stretch that far, it’s much easier to recommend something like the OnePlus 7T Pro or Samsung Galaxy S10e, which will offer more value to most people.

Even if a cinematic display is something you love, there are other options which do a similar job, albeit without the 21:9 aspect ratio.

If Sony phones are still on your radar, you might want to hold out for the Xperia 2, expected in early 2020.

Check out our round-up of the best mid-range phones.