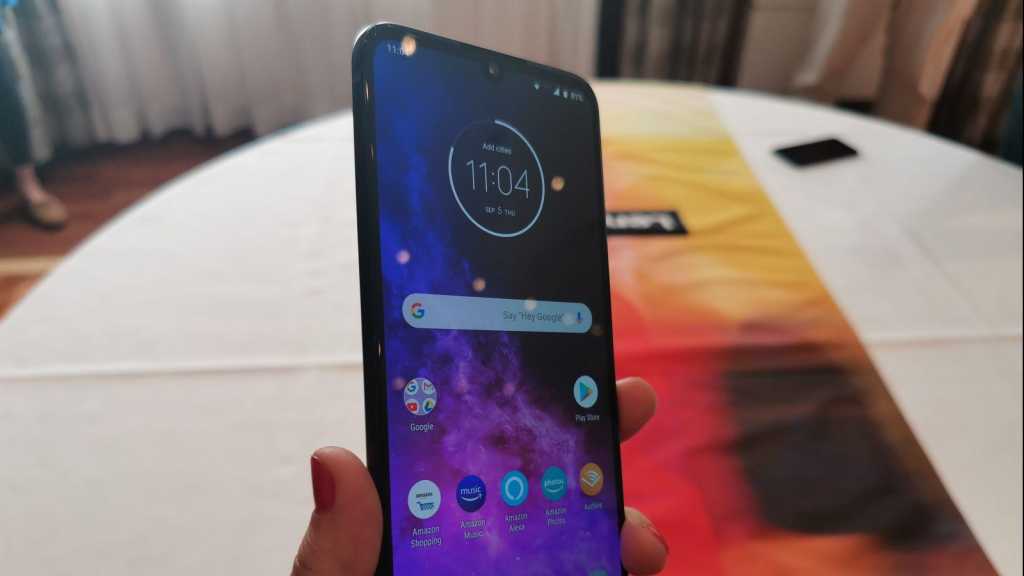 Having held the phone in our hands for just a few moments the Motorola One Zoom gave us a great feeling, thanks to an original and beautiful design, very good cameras and decent specifications.  For less than £400 you get a Motorola phone that we don’t think is going to disappoint, though we urge you to await our final verdict once we have fully tested the phone.

Motorola surprised us with two new smartphones at IFA 2019, a mid-range Moto E6 Plus that offers very good value for money, and this Moto One Zoom, which comes with an attractive design and some nice extra features.

During our pre-brief Motorola focused on the One Zoom’s quad-lens camera, but the phone’s original-looking design with its matte finish also caught our eye.

The One Zoom won our  Best in Show award at IFA 2019. Find out what else won awards.

Moto One Zoom: Price and availability

There’s no hanging around here for the phone to become available: you can already buy the Moto One Zoom from Amazon for £379.

When compared to the Moto One Action and Moto One Vision, the Moto One Zoom seems more of a distant cousin than a sibling. While those phones seem to want to imitate Huawei, the One Zoom stands out for being different – albeit with the same rounded corners that make this obviously a Motorola.

At the back is a matte finish, which is a refreshing change from the huge number of high-gloss glass-backed smartphones on the market. It is available in three colours, our favourite being Brushed Bronze.

In a design that tallies with that rumoured for the upcoming iPhone 11 and Google Pixel 4, the One Zoom has a square camera assembly at the rear, but here found in a central position within a larger rectangular unit that also contains a Motorola logo. This logo is actually an LED, and can be configured to draw attention to certain notifications.

From the front there are distinct similarities with the Moto E6 Plus, which also launched at IFA. In common with that phone the selfie camera is hidden in a tiny teardrop notch at the top of the display, but with some seriously slim bezels Motorola has been able to maximise the One Zoom’s screen-to-body ratio and allude to a more premium design.

The display itself is a 6.39in OLED panel with a Full-HD+ resolution of 2340×1080 pixels and a tall 19:9 aspect ratio, protected with tough Gorilla Glass. There’s an in-display fingerprint sensor, too, and paired with the phone’s NFC connectivity should make mobile payments easy.

Having spent only a short amount of time with the new Motorola at IFA we were unable to properly test performance or photography capabilities, but we were impressed by the on-paper specifications and will be disappointed if the One Zoom fails to live up.

Motorola has integrated some decent software for optimising photos, but the hardware itself gets a decent write-up. The primary 48Mp lens has optical image stabilisation and an aperture of f/1.7, while a secondary 16Mp wide-angle lens can help you capture more of the scene. There’s an 8Mp zoom lens, which we presume is where this phone takes its name, and this supports a 3x optical zoom. The fourth and final lens, rated at 5Mp, is a depth sensor, and helpful in achieving bokeh (blurred background) shots.

A 4,000mAh battery is capacious, and should deliver all-day usage. There’s an 18W charger in the box, though the phone itself supports 15W, which is still pretty fast and lets you get back up and running once the battery does deplete.

The £379 price tag puts the One Zoom firmly in the mid-range, and thus the Snapdragon 678 processor seems apt. It’s not the fastest smartphone chip, but paired with 4GB of RAM and 128GB of expandable storage it’s certainly enough for most users.

At this price you naturally lose some top-end features, such as wireless charging or proper water resistance. The One Zoom is ‘P2i’, which means it is splashproof but not submersible.

If price and photography are priorities when it comes to choosing your next phone, the Moto One Zoom could be an ideal purchase. You aren’t going to find flagship performance at this price, but in the One Zoom you will find a capable phone with a decent screen, an original design and some more than capable core hardware.

This review originally appeared on our sister site PCWorld Espana.