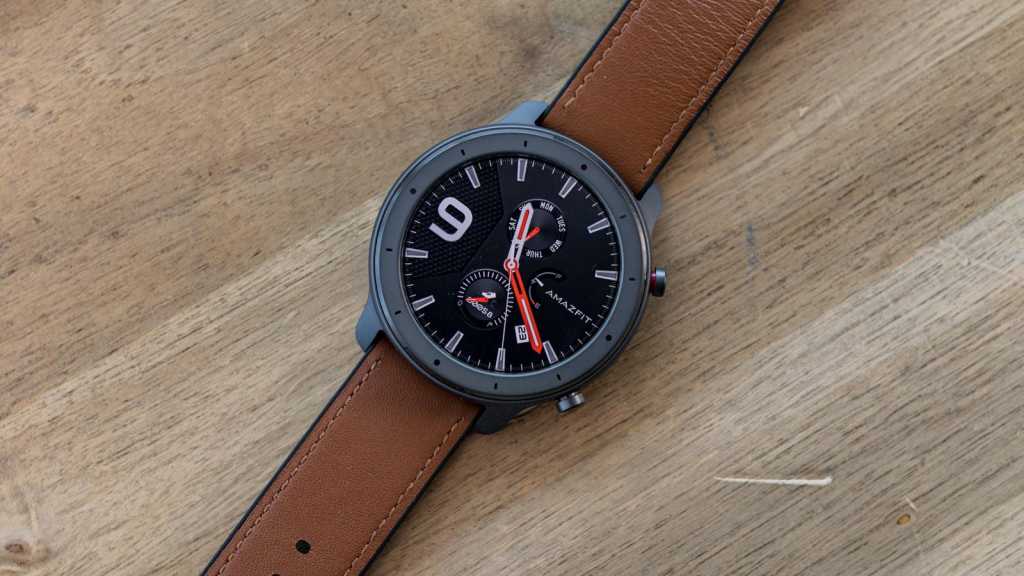 The Amazfit GTR comes in at a much cheaper price than its rivals and matches most of them when it comes to performance and abilities. But the lower price does come with a few drawbacks.

There’s been a l ot of hype surrounding the arrival of the Amazfit GTR – mainly because of its budget price point, which undercuts other rival smartwatches. It’s got a great design for everyday wear, killer battery life, GPS, heart monitoring, sleep tracking and a number of different sports modes for exercising.

It doesn’t offer all the features that some of the more expensive smartwatches do, but it does everything else pretty well. The watch is user-friendly and seemed thorough on the tracking side of things.

However, the lack of Android, Google or iOS firmware means that you’re stuck with the included apps and don’t have much flexibility to customise your watch as you might like. This may also mean that updating your watch may be a bit of a faff once the time comes around.

The watch is getting a follow-up product – the Amazfit GTR 2, along with the GTS 2.

Chinese tech giant Huami is known for creating products that rival the big western names but with slashed prices. The Amazfit GTR is no exception to this.

GearVita are the original suppliers, but it’s currently out of stock at the moment. If you’re based in the UK, you can pick up the GTR from GearBest for £122.40, which is 17% off its usual price of £147.43. Gearbest also offers shipping to the US, with the model currently priced at $149.99. To choose your preferred shipping country, simply select your country from the drop-down menu on the top right.

It’s also available on Amazon UK, where it’s £159 for the titanium model and £128 for the stainless steel version, both in 47mm.

The prices put the Amazfit GTR right at the entry-level range in comparison to other smartwatches that we’ve reviewed in the past.

The Amazfit GTR is a touchscreen smartwatch with a digital face. The good news is that this is an attractive wearable – you could mistake it for a normal watch as opposed to a fitness tracker. It comes with a smooth leather strap and a chunky yet minimalist face.

This isn’t the lightest of watches, mainly because of its big face and thick strap, however, the weight of it isn’t something that will bother you all the time – just notable once it’s off your wrist. Its bulky shape also meant that it was an annoyance when wearing clothes with tight sleeves.

Navigation on the watch is a mix of buttons on the side of the body and swiping across the screen, both of which were straightforward to use. The screen itself boasts a 1.39in (454×454, 326ppi) AMOLED display with Gorilla Glass which was clear and bright, and the larger face allowed me to read text clearly and easily.

You can also choose from over 100 different faces in the app; from digital and sporty, to classic and analogue. The store is continuously updated with different options to choose from if you’re looking to switch things up regularly.

There isn’t a way of differentiating between general exercise, unlike other watches which can track specific sports like yoga. However, this is a very niche feature that does not always come as standard on all fitness trackers.

This watch comes built-in with a BioTrackerTM PPG optical sensor on the back, designed to offer accurate readings when it comes to heart monitoring. The high-precision GPS is able to track where you’re exercising and show a map of the route you’ve taken when you’re out and about.

The Amazfit GTR is also meant to be water-resistant up to 50m. To see how well the proofing was, we tested this watch in open water. Fortunately, it seemed to hold up well, tracking exercise in the water and performing with no bugs straight afterwards.

The official word from Huami is that the 410mAh battery can last up to 74 days with basic usage and 24 days on typical usage with all the features turned on. I, unfortunately, haven’t had the time to test whether these figures are in fact true but with nearly two week’s worth of usage – including testing the sports modes and heart monitoring on several occasions – I’ve used just over 25%, which is not bad going. The watch allegedly can also last 145 days on standby, again dependent on your usage.

The heart rate monitor on the back of the watch allows you to track your daily resting rate and track your night’s sleep on the app. You can see where in the night you fell into deep sleep and if you woke up at any point. You can also turn these features on or off as you please should you want to conserve the battery. They all seemed to work without hiccups and seemed reasonably accurate too.

As with most other smartwatches, you have integration with your phone notifications, including SMS and apps. You can also look at other features like the weather or set alarms. That said, some of the features that you can see on the watch are not accessible without using the app first. For example, you can click on ‘event reminder’ but there’s no option to actually add an event manually on the watch.

Though this is billed as an everyday smartwatch, it does not possess the same capabilities that a higher-end model would. It doesn’t come with WiFi, a microphone to make calls or storage to download music or podcasts and listen via Bluetooth headphones. You can still remotely control music from your phone but you can’t listen directly on the watch.

You also have the option to disable the idle features on the watch, which includes a notification when you’ve been “sitting for too long”. Obviously this might not be a helpful feature if you’re stuck at your desk all day, but the thought is definitely there.

The biggest downfall of this watch comes with the lack of mainstream firmware. Most rivals run on either Wear OS (formerly Android Wear) – Google’s wearable operating system, whilst the GTR just runs the basic system that Huami has created. This means that you have fewer options to customise your watch from your phone and no way to add in new features as you would as on rival devices.

Just like the Galaxy Wearable and Samsung Health apps, the Amazfit app has the basics you’ll need for fitness tracking and everyday wear. You can change your watch face, look through previous heart monitoring records, set goals for your daily steps and track your streaks if that’s a big motivator for you.

The user interface isn’t always completely straightforward. There’s a lot of going back-and-forth to get to where you want, which is annoying at times. This is mainly because the app is designed to serve users who have multiple Amazfit products, so you have to constantly click on the watch in your profile. But realistically, most people will only be wearing one product at a time, so it’s a tad redundant.

As the app connects to your phone via Bluetooth, we found that it drained the test phone’s battery quite quickly when using all the various functions. This is something to keep in mind when you’re exploring all the functions that the app offers.

Some of the translations for the app are also a little dicey, including some claims that aren’t scientifically backed up. For example, if you go to bed late, the app says that you should consider an earlier bedtime as “sleeping late can speed up ageing”. This is obviously quite a bold statement from Huami, so it should be fact-checked first.

Also, If you’re someone who likes to share your workout goals with friends or family (or you’re just competitive) then you can actually share screenshots of workouts from within the app. While taking a screenshot on the paired Pixel used for this review naturally brings up Android’s native share feature, the app also recognises this action and presents a specialised share menu of its own, which is a nice feature. You can also pair with your friends on the app if you want someone else to keep track of your progress.

You can use the Amazfit app to set goals for your weight and activity, however, the latter only applies to the number of steps that you can take in a day. You can’t set goals for the specific exercises that the watch tracks, but you can at least view your records from previous workouts to use as a benchmark.

Though the Amazfit GTR mainly functions as a basic fitness and health tracker, the classic design makes it a great wearable for everyday use. It may lack some of the abilities and higher-spec features that other smartwatches have (like a microphone or wireless technology), but the cheap price tag certainly makes up for those losses.

The watch does by running on Huami’s homebrew user experience, and some of the tips and tricks it doles out could benefit from a little copy editing and fact-checking. The way the app drains your phone’s battery is also not helpful when you’re out and about.

All in all, the Amazfit is a great budget fitness smartwatch to use on a daily basis. If you’re looking for something that fits the bill but want more options when it comes to exercising, then we suggest taking a look at the Withings Steel HR Sport.