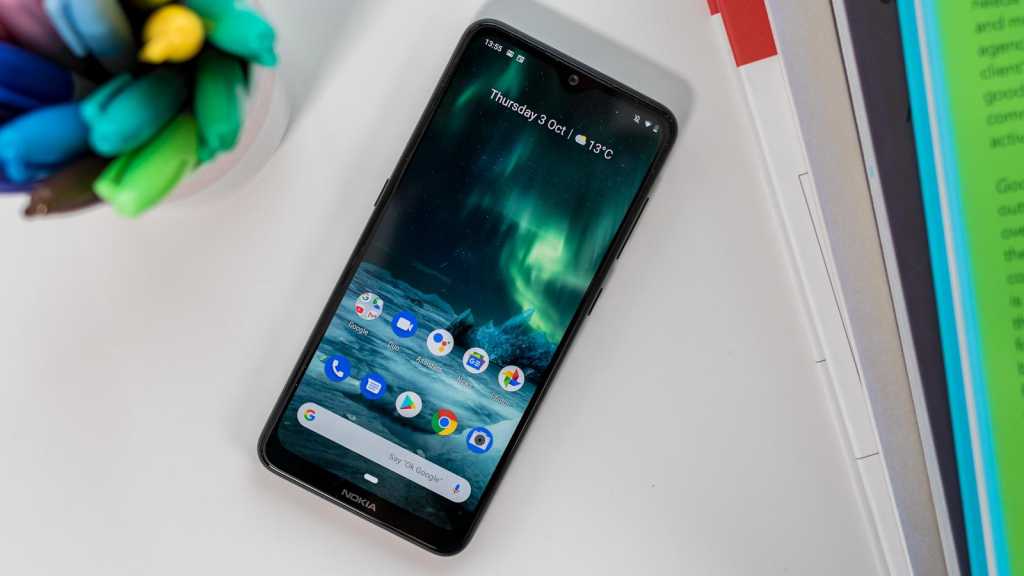 The design of the Nokia 7.2 is eye-catching and unique compared to most of the competition – for better or for worse – with a fairly angular design and a glass back that refracts the light to provide a high-end look. The internals are fairly standard for a budget device too. The main issue is disappointing camera performance, especially with regards to the ultra-wide camera.

The Nokia 7.2 is one of several new phones announced by the Finnish company at IFA 2019, but the 7.2 looks to be the most impressive of the bunch with an eye-catching design, Zeiss-branded cameras and most importantly, an affordable price tag. But with an increasingly busy budget market, does the Nokia 7.2 offer enough to tempt users away from the likes of the Google Pixel 3a  and Xiaomi Pocophone F1?

We’ve spent a lot of time using the Nokia 7.2, and here’s what we think.

The Nokia 7.2 is now available in the UK priced at just £249, coming in Cyan Green, Ice and Charcoal – the latter being exclusive to Carphone Warehouse. In Europe it’s €299.

You can also buy the 7.2 from Argos, Amazon, John Lewis and AO Mobile. Take a look at our best budget phones for some alternatives.

Nokia claims that the Nokia 7.2 is inspired by “timeless Nordic design heritage”, and while we’re not exactly sure what that means, we do know that the Nokia 7.2 is a gorgeous-looking smartphone with an angular build reminiscent of the iPhone 4 design. On the front, you’ll find a 6.3in waterdrop display – named due to the tiny central notch that houses the front-facing camera – but it’s the rear of the smartphone that really catches the eye. 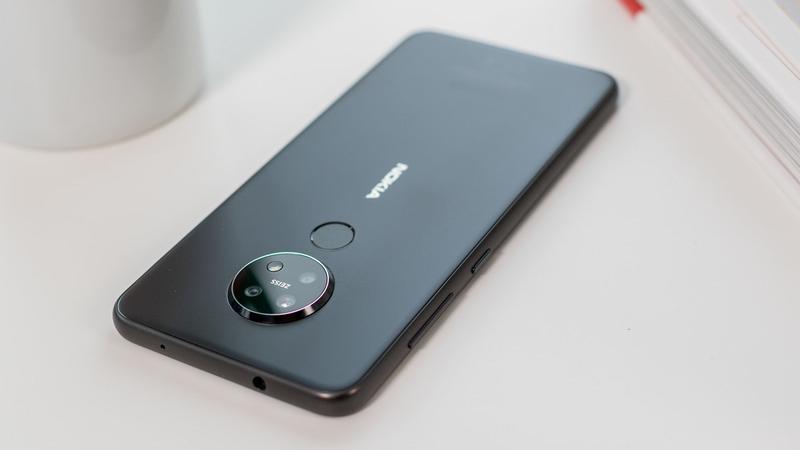 That’s because the rear of the Nokia 7.2 features light-diffusing glass that creates a unique shimmer when caught in the light, giving the smartphone a distinctly premium look. It’s available in three colours; Cyan Green, Ice or Charcoal, and while some may be put off by the idea of a green smartphone, it’s our favourite colour option of the three.

It’s one of few design features that help differentiate the Nokia 6.2 and Nokia 7.2, aside from the Zeiss-branded lenses which we go into more detail about below.

The body of the smartphone is made from a polymer composite that Nokia claims is half the weight of aluminium while being twice as strong as polycarbonate – durability isn’t really something we can test, but it certainly feels light in the hand at 180g.

But while it’s lightweight, the angular iPhone 4-esque design, 8.3mm thick body and the subsequent lack of a curved rear means it doesn’t sit in the hand very comfortably, and we’ve found ourselves constantly adjusting our grip when using it to find an angle that’s comfortable. 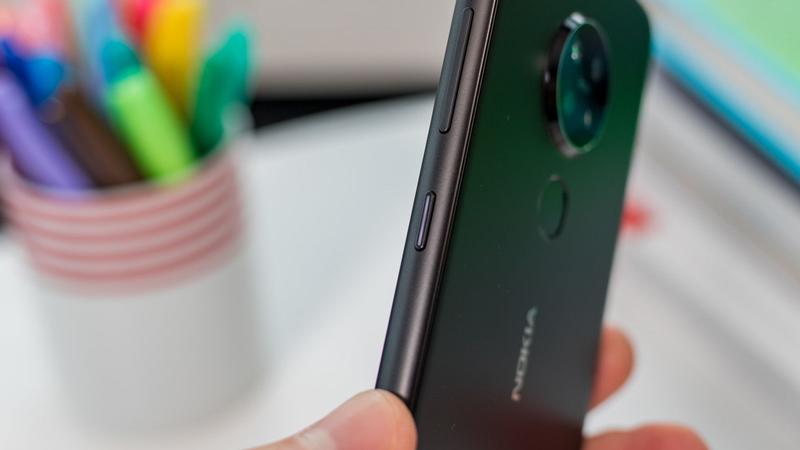 Angles aside, the Nokia 7.2 features a USB-C port, a 3.5mm headphone jack, a dedicated Google Assistant key and a white notification LED built into the power button for a rather unique look.

There’s no denying that the Nokia 7.2 is a good-looking smartphone, but there’s more to it than just a pretty face.

The Nokia 7.2 features a 6.3in FHD+ (1080 x 2280) LCD display with 10-bit HDR certification, and while that’s not to be sniffed at, the display is further enriched by what Nokia calls PureDisplay technology. The company claims that it overclocks the LCD to “outperform OLED in many areas”, offering a 96 percent colour gamut, an impressive 1:4500 contrast ratio and improved colour accuracy compared to other LCD-powered smartphones on the market.

That’s admittedly hard to test, but we’ve got no complaints about the clarity, brightness or detail offered by the Nokia 7.2’s Teardrop display. 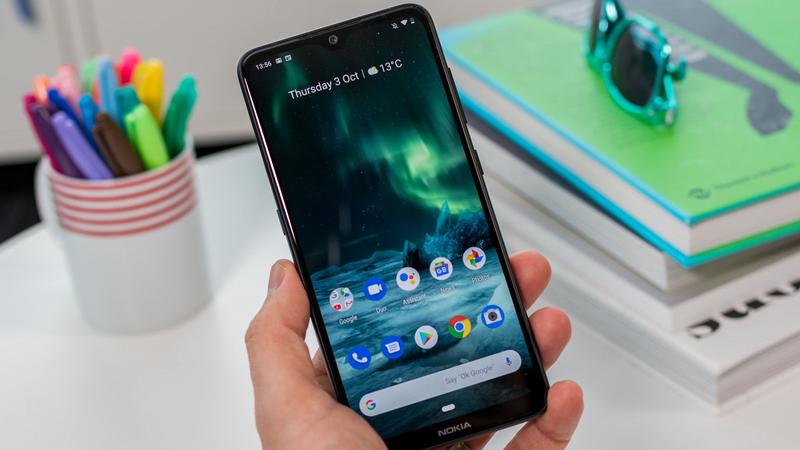 That’s not all the PureDisplay tech does, though. Utilising a built-in Pixelworks visual processor, the smartphone can upscale standard SDR content to HDR on-the-fly, providing an enhanced viewing experience even if the movie or TV show you’re watching doesn’t officially offer HDR support. The differences when comparing SDR and HDR aren’t the easiest to spot without having them side-by-side, but we have noticed brighter highlights when binging Netflix shows.

In terms of brightness, Nokia claims a maximum of 500nits from the 7.2, but we’ve found that it’s closer to 400 with our display benchmark capping out at 402cm/m2. But even without hitting 500nits, we’re still able to use the Nokia in bright environments – although it can struggle a bit in direct sunlight.

The Nokia 7.2 features a triple camera setup on the rear, comprised of a main 48Mp sensor with pixel-binning tech, an 8Mp 118-degree ultra-wide-angle sensor and a 5Mp depth sensor to improve the accuracy of the bokeh in portrait photography. 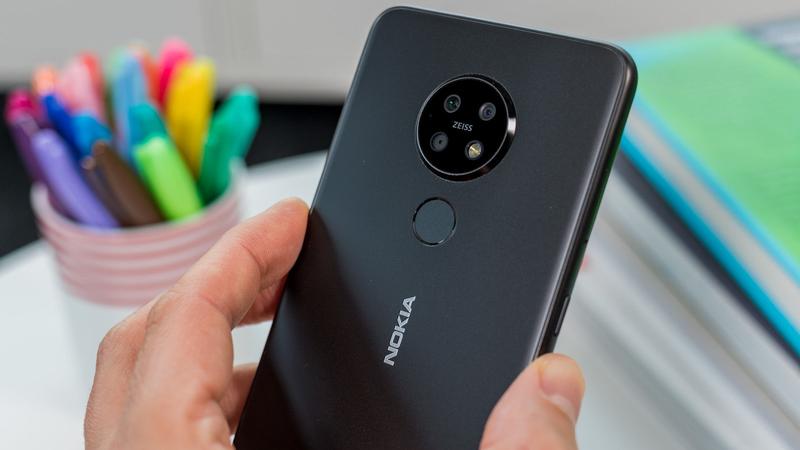 The photography is generally quite impressive from the 48Mp sensor, producing detailed, well-lit images, but the same can’t be said of the wide-angle camera. We’ve found that the wide-angle photos generally lack vibrancy, and zooming in reveals an over-aggressive noise reduction algorithm at work. It’s so aggressive that in photos of buildings, like the below shot of St. Pancras hotel, look as smooth as butter instead of capturing the detail of the brickwork. 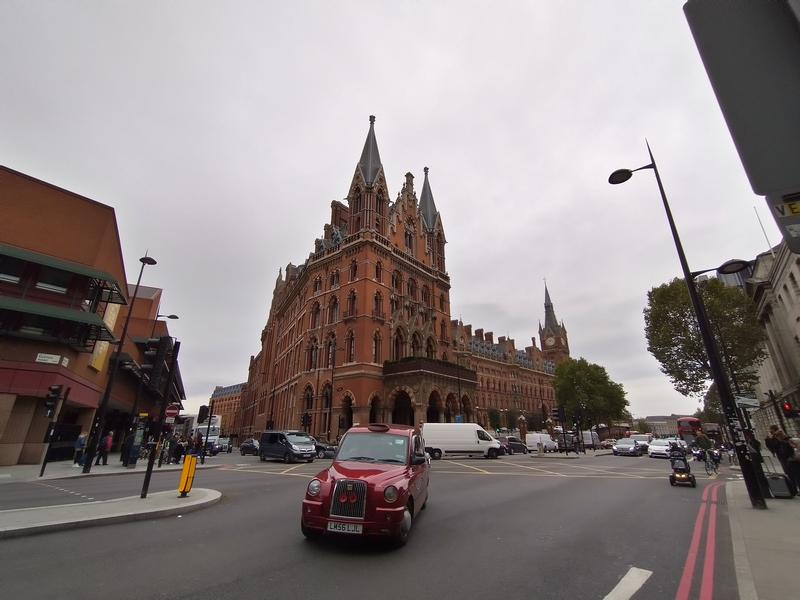 Both rear lenses feature Zeiss optics, which Nokia claims help to recreate a DSLR-level bokeh effect in the HDR-enabled Portrait mode, complete with signature Zeiss styles (Modern, Swirl and Smooth), but we’ve found this to be a bit hit-and-miss during testing. 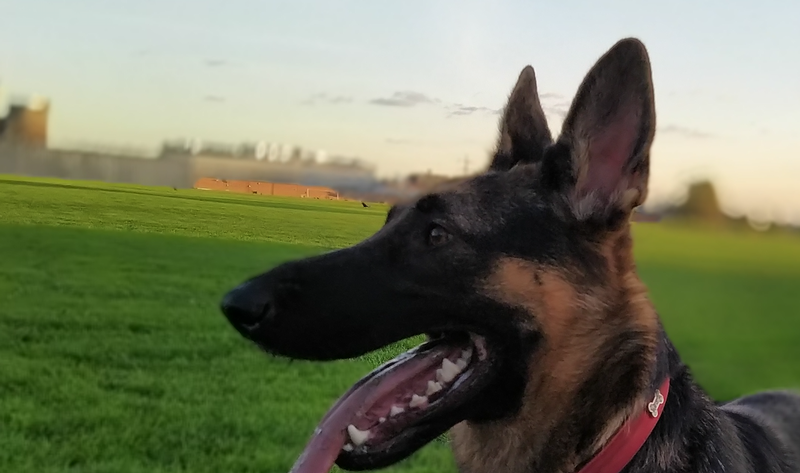 The phone doesn’t always get the edge recognition right, especially if it can’t recognise a human face, so a part of your subject’s face may be blurred. We’re not a huge fan of the Zeiss-style blur effects either, with unnatural levels of background blur and no option to tweak the effect once the photo has been taken.

The front-facing 20Mp selfie camera also gets the Zeiss optics treatment with full Portrait mode support and produces decent results, even without a dedicated depth sensor. 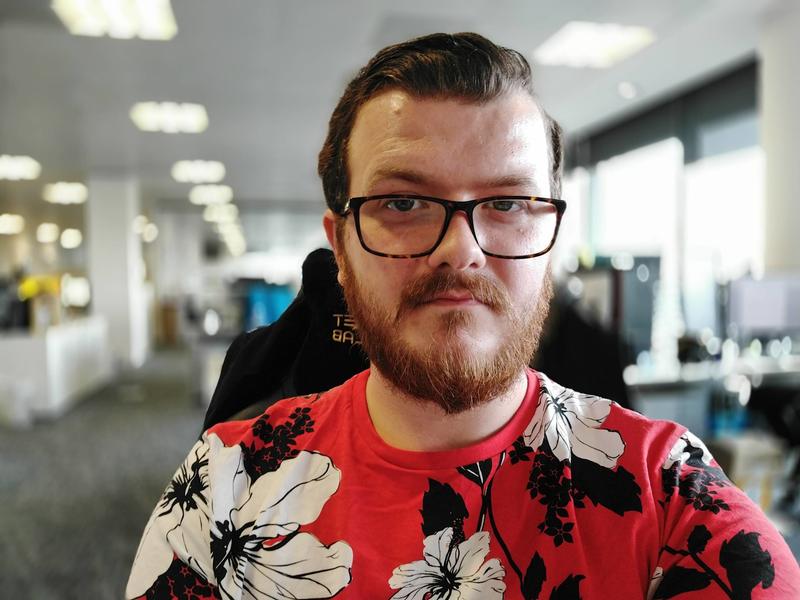 The rear camera setup also boasts a dedicated Night mode, enhanced by the onboard UI. The smartphone can detect whether it’s being held or secured via tripod and adjusts the number of exposures accordingly, ranging from 20 on a tripod to 8-10 in handheld mode. The mode also boasts intelligent noise reduction and ghost image reduction, and Nokia claims that it’s so effective that it’ll work in an environment with as little as 0.1 lux of light. 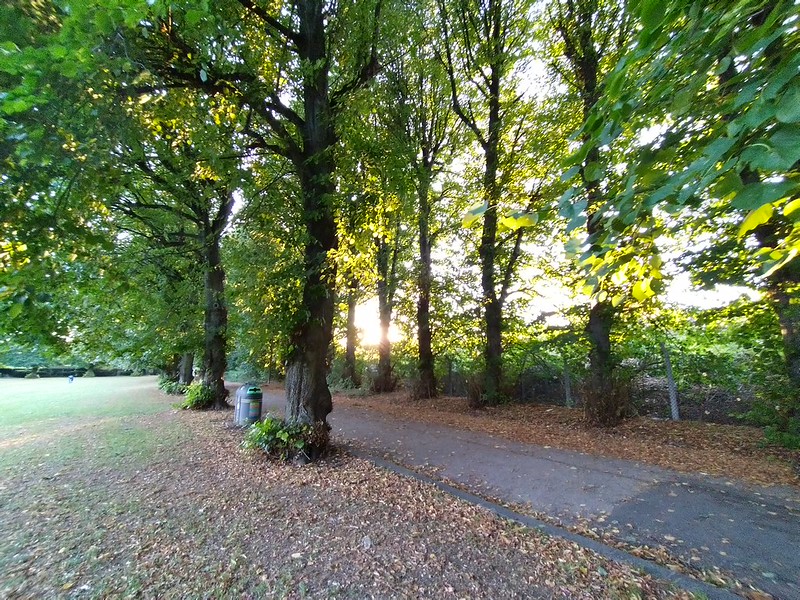 In reality, though, it’s not quite as impressive as it sounds – especially the 0.1 lux claim, where it technically works but the final images don’t look great. It does perform better in low-light city environments where there is still a decent level of ambient lighting, but it’s not the go-to snapper for true night time photography.

In terms of video, the rear-facing camera setup caps out at 4K@30fps, but at this resolution, you won’t find any kind of stabilisation tech at work – for that, you have to drop down to 1080p@30fps. At that level, the stabilisation is noticeable and despite offering EIS over OIS, it produces fairly smooth, shake-free footage.

The Nokia 7.2 features fairly standard internals including a Qualcomm Snapdragon 660 alongside either 4- or 6GB of RAM depending on the variant that you opt for. It’s a similar story with storage, with either 64- or 128GB of storage on offer, although this can be expanded thanks to the inclusion of a microSD card slot.

During our time with the 4GB/64GB variant, it didn’t feel particularly sluggish in general use, but certain tasks – like opening the Camera app – can take a couple of seconds at times, and that’s not great when smartphones in 2019 generally offer speedy performance. We’ve also noticed a slight stutter when scrolling through media-heavy apps like Facebook and Twitter, letting down the overall experience.

This is reflected in our benchmark tests, which you can see the results of below.

In terms of battery life, the Nokia 7.2 sports an impressive 3500mAh battery which Nokia claims is enough to provide the majority of users with two days of life on a single charge. We’ve found that claim to be a bit of a stretch during our time with the phone, but it will comfortably get you through the day with average use without requiring a top-up.

When it does need a top-up, Qualcomm’s quick charging tech should speed up the experience, although the 10W charger included in the box isn’t capable of providing a speedy charging experience. 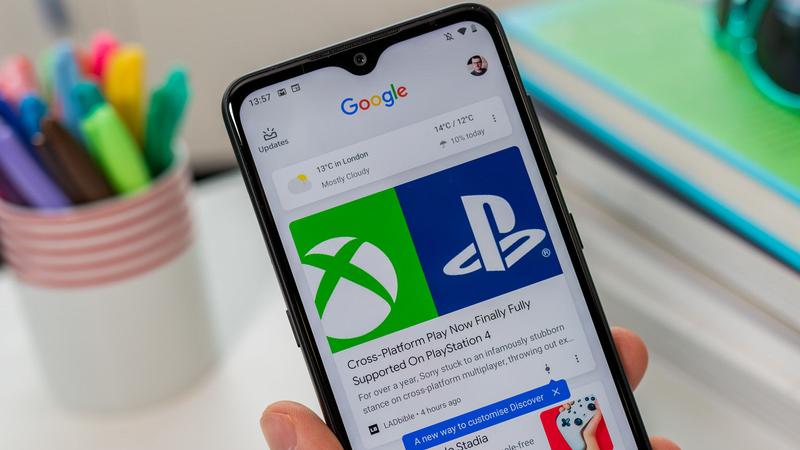 Like the majority of the current Nokia range, the Nokia 7.2 is part of the Android One family. That means the 7.2 will get monthly security updates for three years alongside OS upgrades for two years, bringing more value to the budget smartphone.

Aside from that, the Nokia 7.2 provides a clean Android experience, free of any bloatware and branded apps. It’s also one of few phones to offer Google Assistant Ambient mode when it’s plugged in, essentially turning the smartphone into a smart speaker/display with hands-free Assistant support.

The Nokia 7.2 is a tough one to judge as in some areas it excels, but at the same time, other areas fall short of what’s on offer from the competition. We do generally like the angular design of the Nokia 7.2, with little details like building a notification LED into the power button and offering a dedicated Google Assistant button enhancing the overall look and feel of the device.

The display is another impressive area, with Nokia’s PureDisplay tech overclocking the IPS LCD display to provide great colour accuracy and detail, and the ability to upscale SDR footage to HDR on-the-fly is an impressive feat too.

The main rear-facing 48Mp sensor captures detailed, well-lit and vibrant images, but the performance is hit-and-miss when it comes to the 8Mp wide-angle camera and Portrait mode. The 20Mp front-facing camera is decent though, and should suffice for selfie-taking and video calling alike.