The Osmo Mobile 3 performs really well and is the obvious choice for anyone looking for stable footage from their phone. It’s now so cheap that the competition is blown out of the water.

The Osmo Mobile 3 is a brilliant phone stabiliser at a very tempting price. The fact it folds up and now uses the Mimo app makes it even better than its rivals – and predecessors.

Phone gimbals aren’t for everyone, but if you shoot video for YouTube or simply love making home videos, they really can add a professional touch. They work like drone gimbals, smoothing out movement to give a Steadicam-like appearance to footage.

DJI is now on its third version of the Osmo Mobile and adds a couple of useful features as well as generally improving everything and lowering the price. Fact is, you can’t get a better gimbal for less.

There are cheaper alternatives, but you won’t save much and you’ll probably get a much worse app than DJI’s Mimo.

We think it’s worth going for the Combo edition which costs a little more but includes a carry case and tripod. You can buy the Osmo Mobile 3 Combo (and the regular version) from Heliguy in the UK as well as other retailers, including Amazon.

At the time of review, the wait was a couple of weeks for delivery due to limited stock.

The obvious change is the folding mechanism. Most phone gimbals don’t fold, so they’re quite bulky. The Mobile 3 measures 187 x 122 x 46 mm when folded, and fits snugly into the case supplied with the Combo pack. Unfortunately, the tripod in that kit does not, but it does slot into the stretchy pocket on the back. 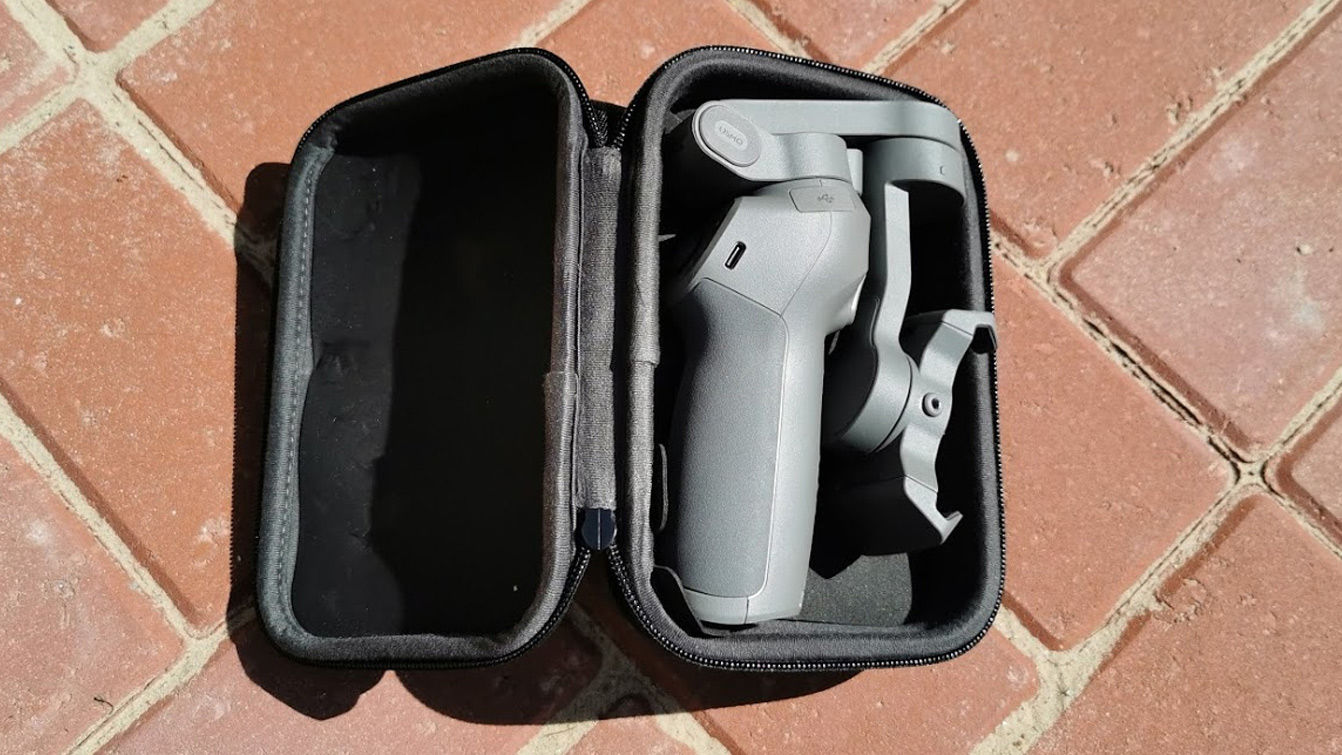 That tripod is a very useful – essential, in fact – accessory for the timelapse mode. Here you can set up to four positions and the Osmo Mobile 3 will smoothly transition between them so you get those Planet Earth-style shots with camera movement during the timelapse. So if you plan to use this mode, get the Combo version.

Getting back to the design, charging is now via USB-C and there’s a USB-A port for keeping your phone battery topped up while shooting those multi-hour timelapse sequences. Battery life is the same (and still impressive) 15 hours as the Osmo Mobile 2, although that will be reduced if you’re also charging your phone or you haven’t balanced your phone perfectly. 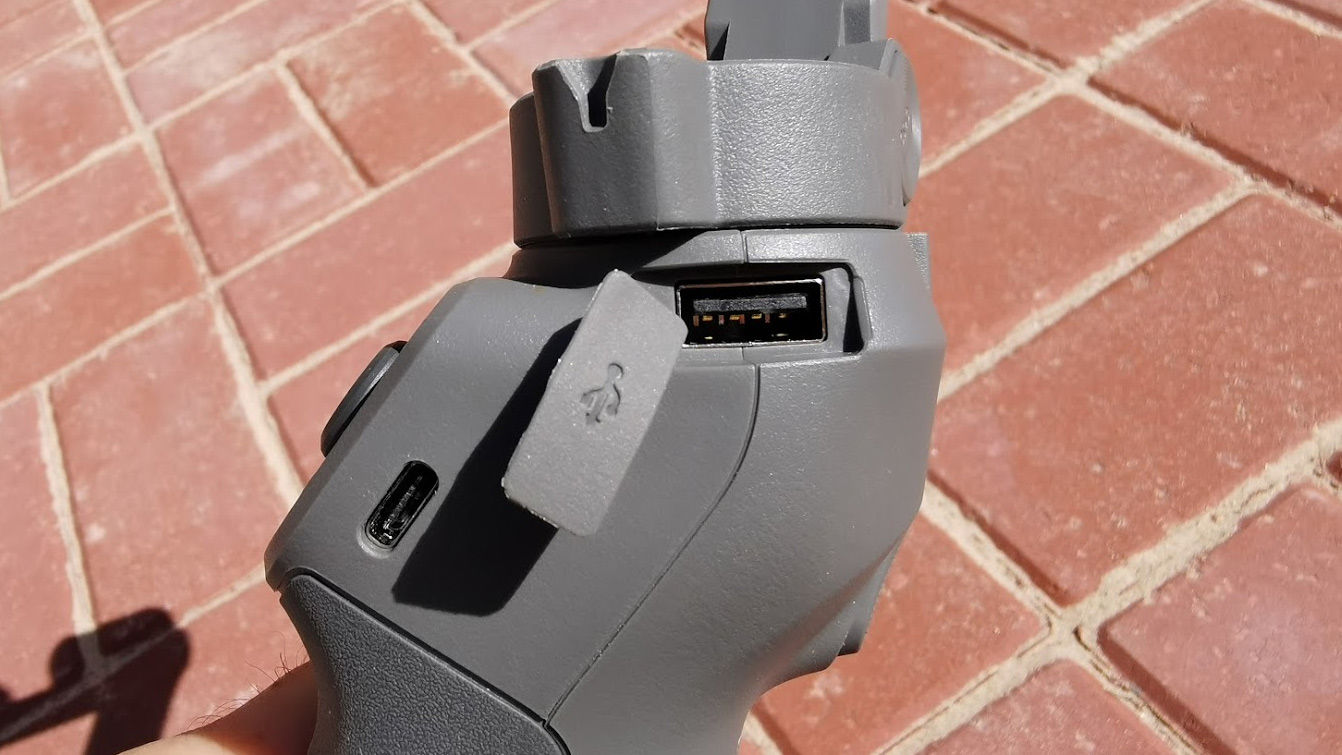 Controls are largely unchanged: the joystick moves the gimbal yaw and pitch, but not roll. The mode button can be configured to do various things, while the record button starts and stops recording, or takes a photo depending upon the mode the Mimo app is set to. 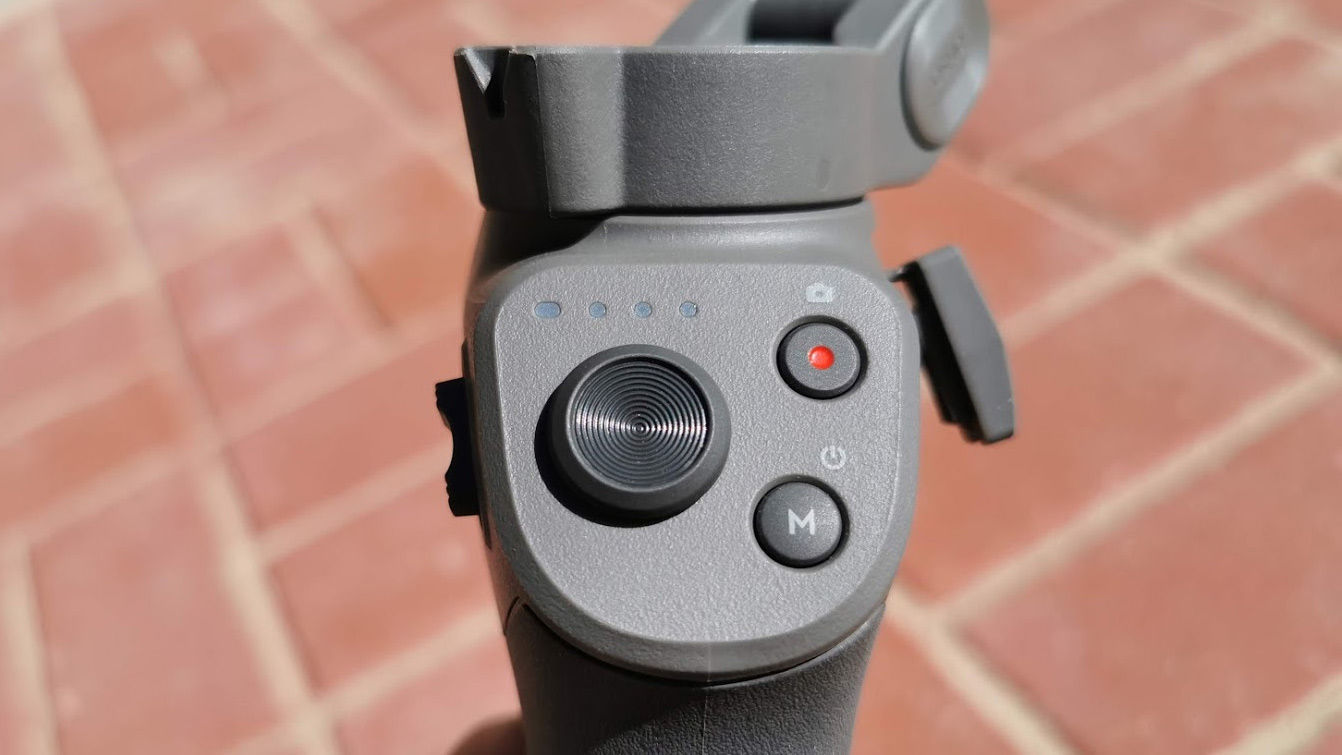 A trigger on the back can be held to lock the yaw, so the gimbal can be used for slider shots. Pressing it twice re-centres the gimbal.

As ever, the zoom slider on the side is a digital thing, and won’t switch between cameras if your phone has more than one. Only the main camera can be used – in the Mimo app at least. You can use your phone’s stock camera app, but you’ll lose the ability to use that record button on the gimbal.

The phone holder has a spring mechanism, so it’s quick to put your phone in and take it out. It’s well designed so it doesn’t hold down any side buttons on your phone.

Build quality, as you might expect at this price, is not a top-quality metal finish but a more basic plastic. Yet, it feels sturdy and the rubber grip below the controls helps to ensure it stays in your hand. It’s about 80g lighter than the previous model, which is a bonus too.

Another useful feature in the app is ActiveTrack. You draw a rectangle around a subject and the gimbal will attempt to keep it in the frame as you move around. It’s not perfect and works best with people rather than pets or objects, but as long as you don’t move or turn too quickly, it does a better job than you could do with the joystick.

For the uninitiated, the Osmo Mobile 3 works like its predecessors, so you don’t have to use the joystick to make it tilt or rotate. Simply tilting or rotating the handle in the direction you want the gimbal to move will do the job, and you can set the speed at which it does so. By default it’s nice and slow, which irons out any jerky hand movements.

And unless you’re familiar with the older models, you might not realise that DJI has changed the app: it now works with the aforementioned Mimo app, not DJI Go. Mimo first came out with the Osmo Pocket, and it makes sense that it should also support phone gimbals. Whether DJI will add backwards compatibility with the Mobile 2 and original model remains to be seen.

One extra feature it offers is Story mode. You pick from a handful of pre-set templates which include gimbal movements, music and sometimes titles. Each template is divided up into several sections, and you record each one individually. Hit record, wait for the countdown and then the gimbal will make its programmed moves until the time is up. If you’re not happy with the way the preview looks, the Retake button makes it easy to reshoot it.

At the end you can preview your whole creation, retake a section or save it. It’s a bit like TikTok and Funimate, but the clever camera transitions are taken care of for you.

The app also lets you pick from videos already in your camera roll to produce similarly stylised videos in three categories: Scenery, Travel and Life.

The other shooting modes include Hyperlase – which is Timelapse but while walking – and Pano where you can choose a 180-degree photo or a 3×3 collage.

Here’s a Timelapse example set to move between two positions over five minutes.

At this price, it’s virtually impossible to beat the Osmo Mobile 3, especially now that DJI has switched to the Mimo app that includes the fun Story mode. If you want to record timelapses, go for the Combo pack which includes a handy tripod.