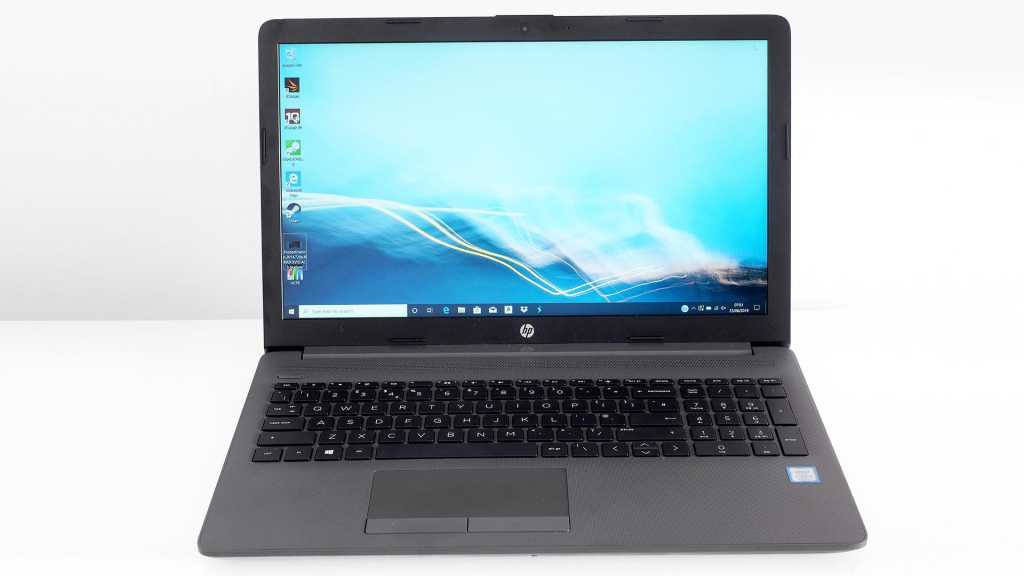 It might not look like much on the ourside, but the 250 G7 has all the best bits hidden away inside. Despite it’s affordable price, it offers specs and performance comparable to laptops twice the price including a Core i5 processor and SSD. Port selection and battery life is also good but the big downside here is a poor screen.

The HP 250 G7 has the insides of a performance laptop, and the exterior of a cheap one. It has a full Core i5 processor, SSD storage and 8GB RAM, all for under £450. Many laptops well over £1000 have similar core spec. Here’s our full review.

Can you can you handle the sacrifices, though? The HP 250 G7 is a style-free zone, the trackpad is charitably described as ‘basic’ and, most important of all, it uses a very poor TN display panel. Don’t be fooled by its otherwise-good 1080p resolution.

It’s still one of the best buys for sheer practical value around, though, particularly now the glossier rival Acer Swift 3 costs £679 for the same spec.

In the UK, the HP 250 G7 is available from just £429 and with decent specs. Our review sample was provided by Ebuyer where it’s £399 after cashback. You can also get the laptop from places like Amazon and HP direct.

See our chart of the  best budget laptops where is competes with the Acer Aspire 3 and Lenovo V330R.

The HP 250 G7 is a very plain laptop. Its shell is grey, peppered with black parts like the keys and screen surround. There’s not a single plate of aluminium to ibe seen and no attempt to look glossy or higher-end than the price.

You’d have to search for a discontinued bargain or make do with a Chromebook to get higher-end design elements at this price, though, and we’re pleased HP has kept the design sensible and simple. All the plastic panels do have an embossed texture. It makes the surfaces more “grippy” and avoids the tacky feel of plain plastic.

HP does not avoid the overall cheap impression, though. This is not so much about flexing in the HP 250 G7. There’s a bit of it, but not loads. It’s more how the laptop reacts to bumps and taps. Every resulting sound is a little high-pitch, which gives off the impression the plastic shell here is quite slight or thin.

This effect isn’t necessarily a given among cheap laptops either. Some of Acer’s Chromebooks seem made to withstand a war (these tend to be based on classroom models, so they pretty much are).

The HP 250 G7 is a 15.6in laptop, so it naturally isn’t particularly small or light either. It weighs 1.78kg and is 22.5mm thick. There’s none of the slim bezel design you get in some high-end laptops either, so the footprint is fairly substantial.

However, during a few weeks’ testing we’ve carried the HP 250 G7 in a rucksack on a few occasions, and it wasn’t a terrible burden. We prefer 13- and 14in laptops for portable work, but this one doesn’t feel entirely out of place when given such a job.

Not fancy, but fine: that’s the HP 250 G7 way. This extends to the keyboard and trackpad too.

The keys make the same kind of higher-pitch sound as the case itself, which doesn’t exactly exude quality. And there’s a fair bit of flex to the surround when you apply pressure.

However, we’re mostly happy enough with the feel. There’s proper travel to each key, and when you analyse the actual tactile feedback ignoring that slightly hollow sound, the level of resistance and the “clonk” of the depression is perfectly good.

Similarly, the trackpad is distinctly non-luxurious but serviceable. There’s no clicky action to the pad itself, so have to use the separate buttons below unless you’ll be happy with zero physical feedback. We aren’t.

Again, the button action sounds quite cheap, but feels better than it sounds.

The pad itself is (of course) plastic rather than glass too. There was almost zero chance of HP using glass here, though, and it’s both smooth and of a good size.

The HP 250 G7’s screen sounds great on paper too, but is one of its weakest areas, like many budget laptops.

A 15.6in screen with 1080p resolution seems to offer everything you could ask of a cheap workhorse laptop. There’s plenty of display space, and enough pixels to make data-packed applications look OK.

However, the panel is very basic. It uses TN technology, which does not provide certain benchmarks of image quality most of us have come to expect, having been spoilt by phones and tablets.

Viewing angles and colour are the clearest offenders. Look at the HP 250 G7 screen dead-on and it seems fine enough, but each degree of tilt worsens its appearance. Fold the display forward slightly and it becomes washed-out. Turn it backwards you and the image turns shadowy, and colours eventually invert.

This makes several kinds of portable use a no-go. If you have to tilt the screen to suit a train or airplane table, or to work with the HP 250 G7 on your knees, the screen won’t look good at all. There’s even a slight sign of this effect when it is on a desk in front of you, because the top of the screen is at a different angle relative to your eyes than the bottom.

Colour performance is weak too. The HP 250 G7 only covers 53% of the sRGB colour gamut, and a dismal 37% and 36% of DCI P3 and Adobe RGB. Most of you will notice the weak colour as soon as you see the Windows 10 Start menu. Tones that should be rich and punchy appear willowy and weak.

You get used to it, and desaturated colour never turned a good movie bad. But a Chromebook at this price would be much better for video streaming.

Contrast is very poor at 375:1 and a maximum brightness of 260cd/m is no more than OK (although higher than some published specs claim). The HP 250 G7 has a weak screen. This would be a much stronger buy if it had an IPS panel, even if it were one with limited colour saturation. But, sadly, it’s the worst part of the HP 250 G7.

You’d never guess it to look at the case, but performance is the best part. What the 250 G7 lacks on the outside, it makes up for inside.

There’s an Intel Core i5-8265U CPU with 8GB RAM and a 256GB SSD. These components are identical, or functionally similar, to those of some laptops close to or over £1000 like the Huawei MateBook 13 and HP’s own Envy 13.

So while we’d rather watch Netflix on a £450 Chromebook, we’d much rather do just about anything else on the HP 250 G7.

You can run Photoshop, industry standard video editing or music production software, and virtually any software package you like (bar those made solely for Macs, of course). This gets to the heart of the HP 250 G7’s appeal. On the surface it’s entirely uninspiring, but its potential is quite vast considering the price.

It’s also more powerful than a lot of similar “all substance, little seasoning” laptops like the HP Pavilion 14. They tend to have Core i3 CPUs and cost around £70 more. But that laptop also has an IPS screen, so this is no true victory for this model.

The HP 250 G7 also has a 250GB SSD, where other entry-level laptops tend to offer a traditional hard drive. Many are just 128GB which leaves little room for comfort if you want to install games or store lots of data-hungry files, and hard drives are simply too slow. They degrade the basic Windows experience hugely.

Is the HP 250 G7 any good for games? By the usual metrics it is not. It only has the Intel UHD 620 graphics chipset baked into Intel Core i5 SoC (system on chip).

However, you may be surprised by what it can run if you play with the resolution and settings enough. It can just about scrape by playing The Witcher 3 at 720p, with graphics set to “low”, although a 20-odd frames per second average won’t be fast enough for some.

Stick to older console style games or less demanding indie ones and the HP 250 G7 gets by OK. Gamers should also consider a laptop with a Ryzen 5 CPU, like the Acer Swift 3 or Dell Inspiron 15 3000. These are available for around £500 at the time of writing and have far more gaming power, without needing a dedicated graphics card.

Noise when under pressure is absolutely the standard for a 15in entry-level laptop. There’s no massive cooling system here and the fans do start when you do much more than light browsing or writing documents, but the larger, slightly thicker case does mean HP did not have to use a very small fan. This avoids irritating higher-pitch fan noise.

The HP 250 G7 has a 41Wh battery, similar to the last version of the HP 250 we reviewed. That laptop lasted for just five hours of video, so we expected something similar here.

Stamina is completely different this time, though. The HP 250 G7 lasts for just under nine hours of looped locally stored video, with the screen brightness set to 120cd/m – around 60% in this case.

Our best guess is that the latest Intel processors are just that efficient, and the screen can’t be too much of a drain either. However, this battery is on the small side and a generational shift in CPUs doesn’t almost double stamina, so you should expect closer to 5-6 hours if your use is more mixed.

What kind of connections do you put into a “meat and potatoes” laptop? A selection of the classics.

The HP 250 G7 has one USB 3.0, two USB 2.0s, a full-size Ethernet port, HDMI and a full-size SD card slot. It’s all the connections we miss in today’s trendiest slim and light USB-C models. They make plugging-in peripherals much simpler.

HP’s decision not to include a single USB-C seems very odd, mind. Virtually everyone seems to have accepted this new shape of USB as the future of wired connections. While we haven’t missed one during testing, you likely will before you get to the point of replacing the HP G7 250.

Those shopping for a cheap “do anything” laptop like this seem unlikely to be the kind to buy a new model every year or two, so the lack of USB-C is a problem. You can buy adapters, but they don’t offer the kind of speed benefits seen in a USB 3.1 Gen 2 or Thunderbolt 3 connector. And given lots of other budget laptops now have USB-C, this omission seems a bit lazy.

The HP 250 G7’s speakers are predictably not great either. There’s almost zero bass, and the mids have a nasal character. Max volume does not impress either, but at least there’s no grating distortion when you set the volume to 100%.

The HP 250 G7 is a very practical laptop. All the gloss has been cut out to get you near-unbeatable performance for the money. You don’t see laptops with full SSD storage, 8GB RAM and a Core i5 CPU this cheap very often.

Its screen is the major sticking point. TN panels always looks pretty horrible on laptops, and they seem even worse now we’ve been spoilt by cheap Chromebooks with pleasant IPS screens. Games and movies don’t look great on the HP 250 G7, but the effect on spreadsheets and documents is much less distractingly bad.

While this doesn’t ruin the laptop’s appeal entirely, it should make many of you should consider an HP Pavilion 14 or 15 instead. At a similar price you only get half the storage and a less powerful Core i3 CPU, but the upgrade to an IPS or SVA screen is an important one.