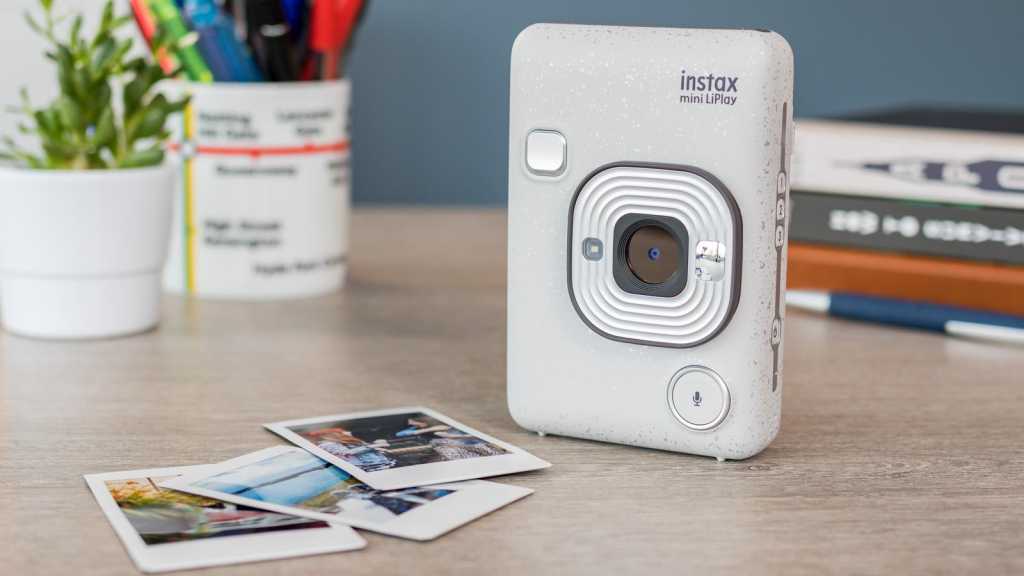 This digital hybrid offers a lot for its money. Having the ability to be both an instant camera and instant printer that can print photos from your smartphone is a huge plus. But are all the features included useful?

Instax is one of the leading brands in the instant camera market, offering all kinds of different products to suit your price range. The Instax Mini LiPlay is a digital hybrid that moves away from the traditional polaroid style, combining digital features with an instant printer.

This flexibility also means that you get two products in one, as the Mini LiPlay doubles up as a printer which can connect to your phone and print photos directly from your camera roll. This is great if you want images with a higher quality than what the standard camera gives.

Some of the digital features included on the camera may be useful to some, but gimmicky to others. However, the image quality is a step up from some of its lower-end rivals, but the price still undercuts some of the other competitors that we’ve tested. See our favourites on our list of best instant cameras.

The RRP for the Instax Mini Liplay is £149.99/$159.99, falling just above the mid-range price bracket of instant cameras.

You can get the Instax Mini LiPlay from a number of different retailers. UK readers can purchase it from the Fujifilm site, Amazon UK, Currys and more. Meanwhile US readers can buy the camera from places such as Amazon US and BestBuy.

However, you must keep in mind the cost of film for the camera, which will add up over time. Fujifilm’s Instax Mini Instant Film costs just under a pound for one print in the UK,  just under a dollar for one print in the US, and the overall cost of the film gets cheaper the more you buy. To compare – Zink Paper – the closest rival which is used for digital prints in cameras and printers from Polaroid, Kodak and more – costs just under fifty pence for one sheet in the UK and just below fifty cents for one sheet in the US. Of course, this isn’t the same as proper film.

This is a camera that doesn’t take itself too seriously, having a modern and chic finish that would suit a young photographer. The rectangular design means that the camera can be used one-handed with ease, and the buttons on the camera are easy to identify and navigate.

The Mini LiPlay comes in three colours – black with a rose gold finish, blush pink and white with a shiny stone effect (pictured). All versions are quite striking; there isn’t a particularly neutral design if that’s what you’re looking for. The camera comes with a detachable wrist strap, and you can take a look at the matching cases available on Amazon. 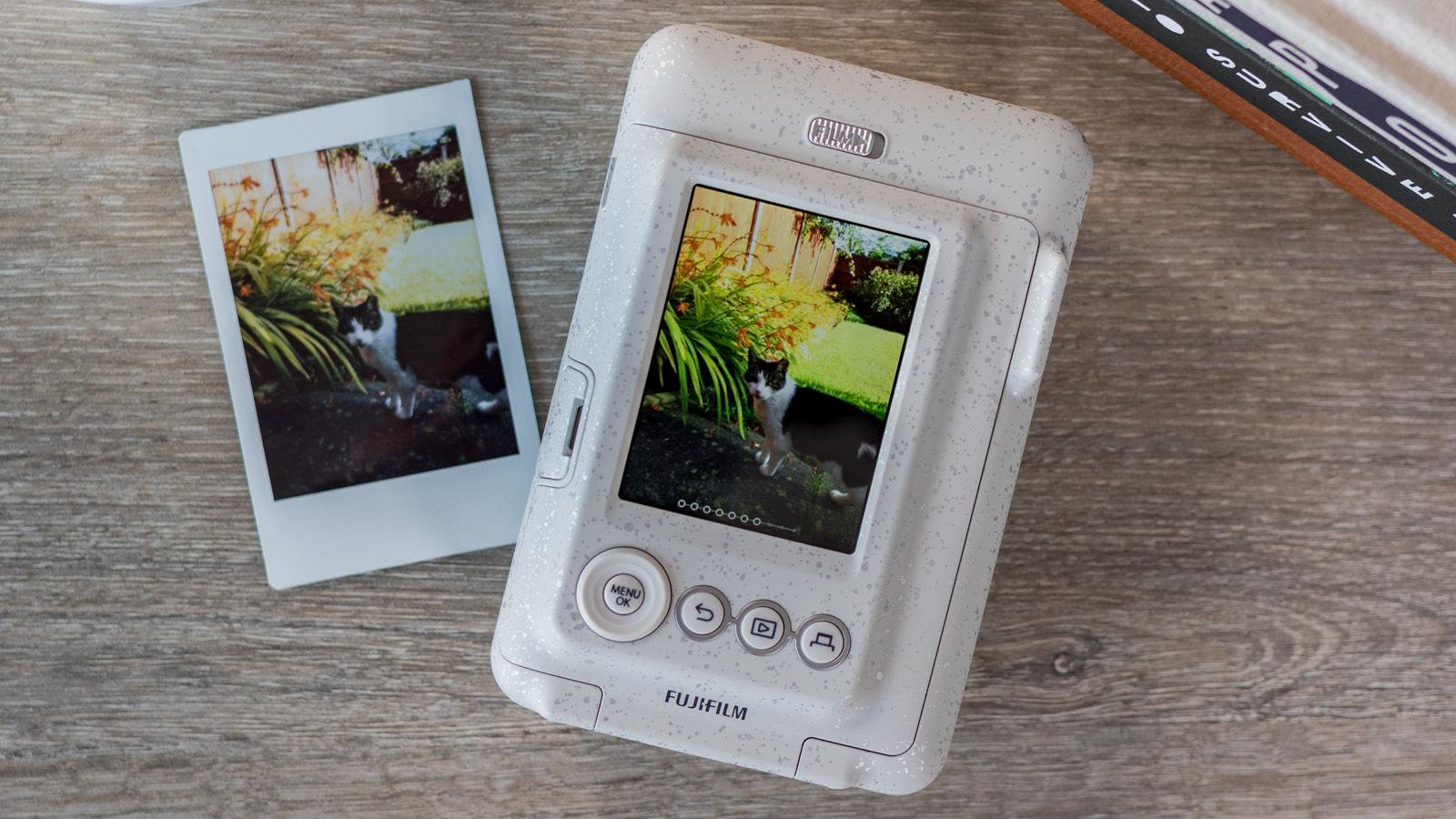 Loading the film and setting up the camera is straightforward. The camera comes with a clear opening on the rear where you can insert the film pack. It’s worth noting that the Mini Liplay uses Instax Mini Film, which has a picture size of 62x46mm. If you’re looking to print images in a square format, then it’s worth looking at cameras that print Instax Square Film, which has a picture size of 62x62mm. This camera is also charged via a microUSB, and claims to be able to print 100 photos on a single charge.

All images are stored either on the internal storage (which stores up to 45 images) or on a microSD card (which holds 850 images per GB of storage). This means you can keep a whole bank stored before choosing which photos you’d like to use your precious film on. This is big advantage over something like the Instax Mini 9, which prints whatever you shoot instantaneously, meaning that your image may not come out as you would have liked.

The screen on the camera is a good size, and actually has a fun little feature which means that when you print, you’ll see the image move up the screen before appearing out the top of the camera. It just gives the whole instant printing experience a more novelty experience.

As this is a digital camera, there are a number of features to play around with to enhance your photos.

Let’s start with the image quality and what the camera is capable of. The resolution of the camera is 4.92 megapixels, the maximum resolution print of 2560 x 1920p and the autofocus system has a focus range up to 10cm. As expected, the camera performed best under daylight, or indoors with natural lighting.

When using the camera under artificial light or at night, it didn’t produce the best quality image. It had a little more trouble focusing and adjusting, and details were not as clear as they would be in a photo taken during the daytime.

Under low light, the camera has the option of an AF illuminator to help provide a clearer image in the dark. I found this to be useful, though of course having the flash on resulted in the most detailed image. You’re also able to change the exposure settings if you want to lighten or darken what you capture.

Speaking of the flash, you have three options to choose from – auto, on or off. This is obviously quite standard on a digital camera, but some cheaper instant cameras don’t give you as much control over the flash settings. I found that the flash was quite well adjusted to the surroundings in auto mode, not going off unexpectedly. 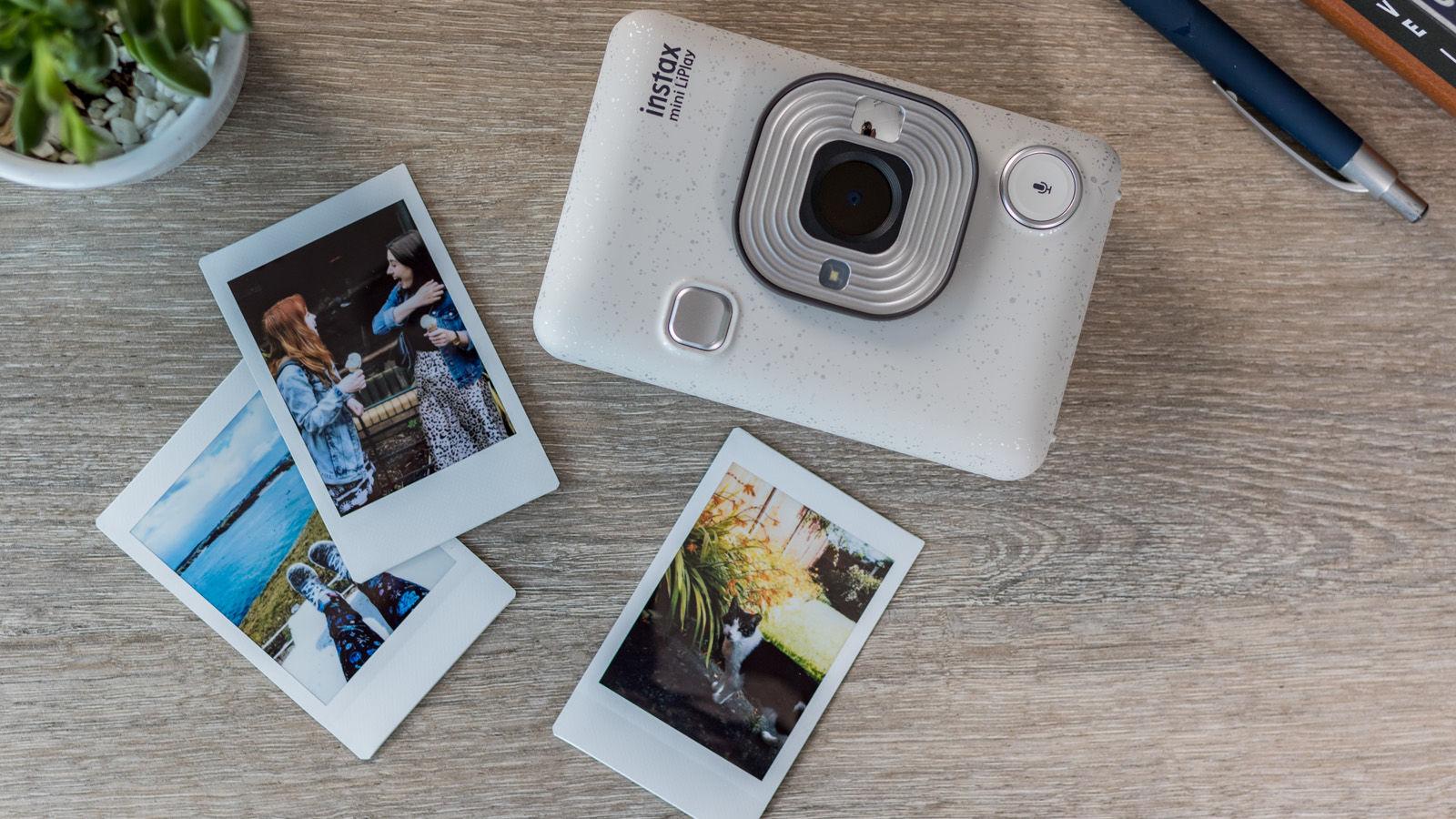 The print quality of the images is clear and crisp, with a vintage tint to the colours that comes standard on Instax Mini film. When it comes to very high-quality images that you may print from your phone (more on this later), you do lose a few of the details, but nothing groundbreaking.

Once you’ve taken a photo, you can zoom in on an image to view it in closer detail. The camera does not come with a lens that can zoom in on images before you shoot, but this is a feature that isn’t standard on instant cameras anyway.

However, that’s not to say that you can’t alter an image before you shoot. There are filter options, which include sepia, black and white and ‘stylish’, which makes all the colours pop – useful if you’re looking to print off a very artsy photo.

There’s also an option of including frames on your photos, not dissimilar to those you may see on Instagram stories. I personally didn’t find much use in including a pair of antlers on the photos I took, but this does come down to the individual.

One feature that is unique to the Mini LiPlay is the ability to record sound (up to ten seconds) whilst taking a photo that you can then play back on a printed image. The way that this works is that you hold the record button on the front of the camera when taking a photo. Once you go to print, you place a QR code on the image (you can adjust where you want this to sit). Then once you have the printed image, you can scan the QR code using your phone, which will take you to a webpage so you can hear the recording. 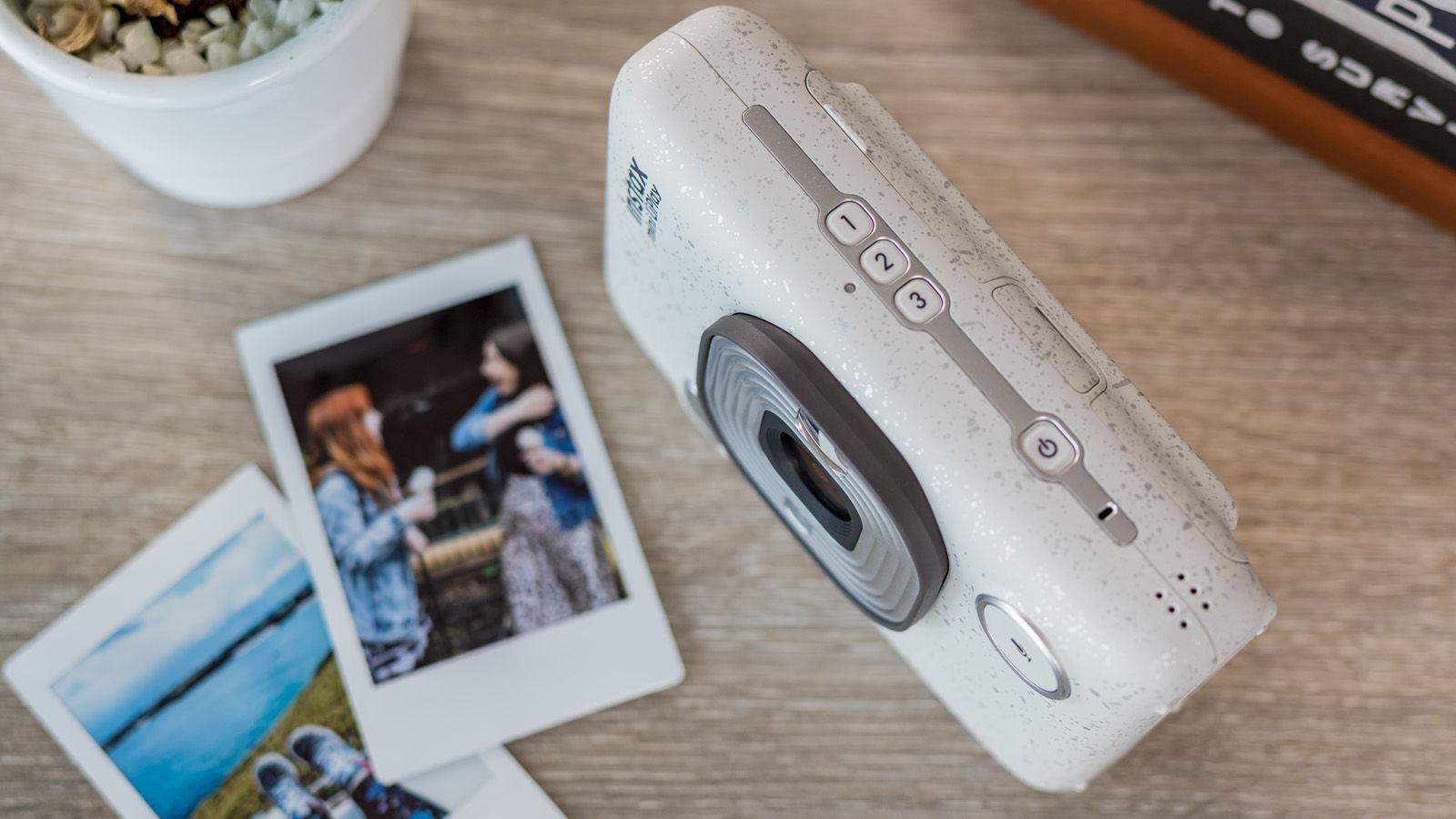 How useful this feature is comes down to personal preference. For me, I didn’t like the look of having a QR code on the photo, and found the process of finding the recording a little arduous. However, if you have a memory that you want to capture as a still image whilst having the option of sound as well, then you’re able to do that with this camera. Instax will only host the audio recordings online for one year though, and after that you won’t be able to listen again, leaving you stuck with a useless QR code on top of your photo.

Having a companion app for this camera allows you to unlock lots of different features. Once you’ve downloaded the (free, might we add) app, you connect the camera to your mobile via Bluetooth and can utilise a number of different modes on the Mini LiPlay.

The feature we were most impressed with was the remote printing. You’re able to access your entire camera roll library, choose your photo, adjust the size and crop to fit the film and then print it directly from the camera. You can’t however connect your social accounts to the app – it only accesses your direct photo library from your phone storage. 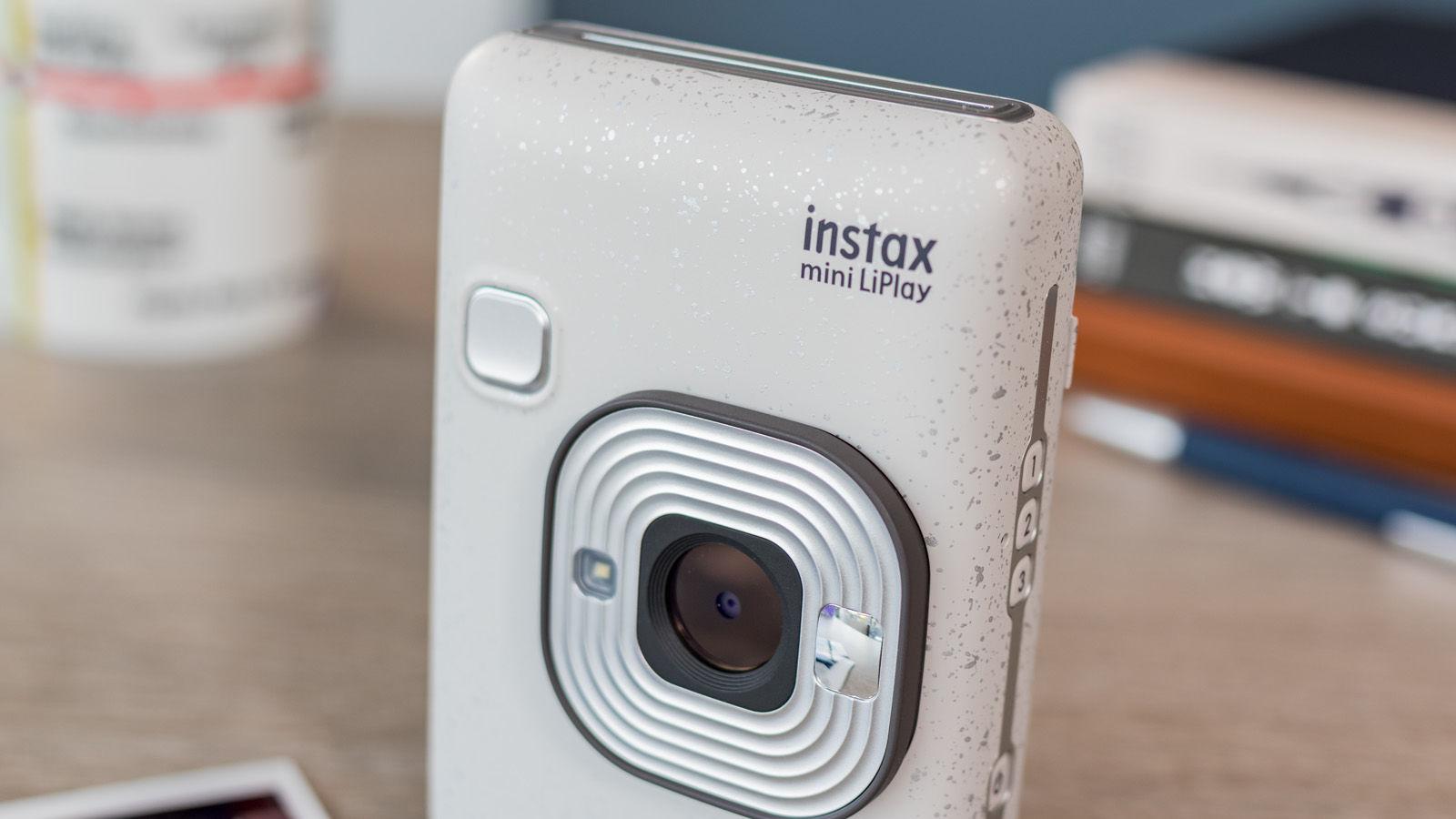 As we mentioned, although the camera quality itself isn’t too bad, this feature allows you to print extremely high quality photos from your smartphone, from anytime. If you don’t have the Mini LiPlay to hand to capture a moment, then that’s fine. You can take a picture on your phone and print it later.

You can also use a remote shooting feature, which means that if you place the camera down, you can see what’s on the screen via your phone and take a photo using the app – something useful for group photos, for example.

Any photos that you take with sound recordings can also be accessed via the app. Once you’ve reconnected via Bluetooth, this image will appear in your library and you can view the image and sound together, without going to a web browser like you do with the QR code.

This mid-range camera certainly packs a punch, as it doubles up as an instant camera, printer and (if you wish) a sound recorder. The digital features allow you a lot of flexibility when taking your images, which means you won’t waste your film unnecessarily if that’s a worry. The companion app is also easy to use and offers extra bonus features that can be really useful.

The image quality is not always 100% on the money, and the fact that the sound recordings only last a year is a shame. The design also may not be to everyone’s tastes, being quite bold and chic and not very minimalist.

However, if these little niggles aren’t an issue to you, then we’d definitely recommend this camera. If you’re looking for an instant camera that isn’t a digital hybrid for a similar price range, then take a look at the Instax Square SQ6.