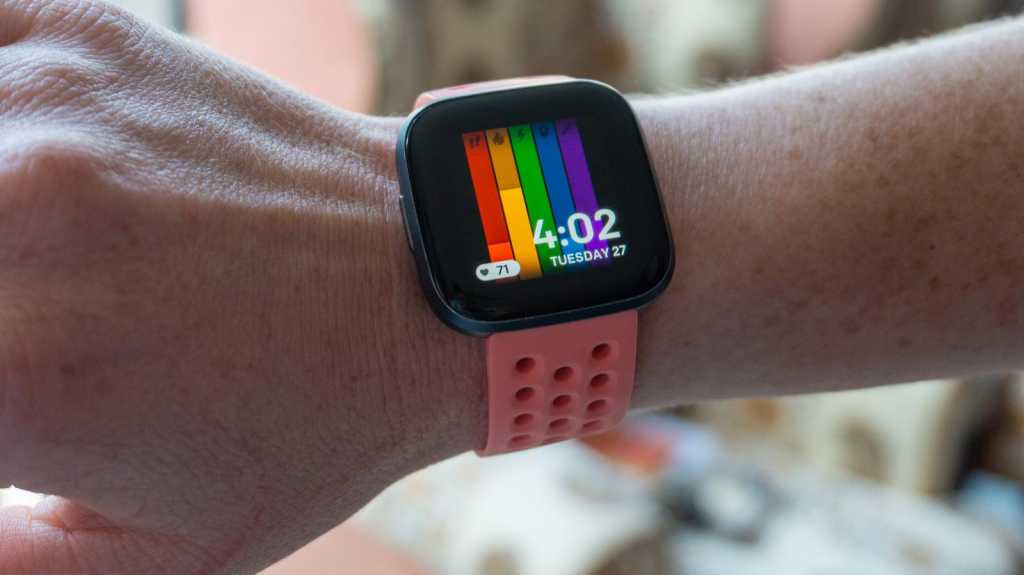 The Fitbit Versa 2 covers all the aspects of a health and fitness watch, measuring steps, heart rate, distance, calories burned, floors climbed, active minutes, hourly activity, and sleep. It offers on-screen notifications from your phone, silent alarms, cardio fitness levels, workout and other exercise modes such as swimming and weights, female health tracking, and wellness features, plus music controls and even Amazon’s Alexa voice assistant. Note that the new Versa 3 is now available. This adds a built-in GPS and (coming soon) Google Assistant to the feature set. The Versa 2 remains a great fitness smartwatch, but if you are looking for the built-in GPS, then you should consider the Versa 3.

After releasing a minimally cut-down Lite version of its popular Versa smartwatch in 2019, Fitbit unveiled the full follow-up, and although the Versa 2 doesn’t exactly reinvent the wheel, it boasts an improved screen and a microphone for Amazon’s Alexa voice assistant on your wrist.

Updated: Fitbit’s latest Versa 3 is an upgrade on the Versa 2. To find out what’s new and different, read our Fitbit Versa 2 vs Versa 3 comparison and Fitbit Versa 3 review.

You can still buy the Fitbit Versa 2 from the Fitbit Store or from online retailers; see our list of the best prices above. And it remains a great fitness tracker. The Versa 3 has a few more features, but it’s evenly matched on core health and fitness measurements.

The Versa 2 isn’t likely to tempt too many existing first-edition Versa owners into an upgrade, but it might just lure a few new people over from the good ship Apple. And it’s a great upgrade from older Fitbits or a starter activity tracker for people just entering the market.

That extra £20 / $30 gets you a second wristband – the Special Editions come with one silicone and one rather lovely woven strap – along with a 90-day free trial of the new Fitbit Premium subscription service.

Perhaps most importantly, the Versa 2 is half the price of the £399/$399 Apple Watch Series 5 and is cheaper than most other top smartwatches too – making it an ideal entry point for anyone graduating from a regular fitness tracker.

However, Apple has now reduced the price of its very able Series 3 Watch to £199/$199, the same price as the Versa 2. We still prefer the Fitbit as the best health and fitness tracker, though – for better measurements, insights and battery life. For more details, read our Fitbit vs Apple Watch comparison. 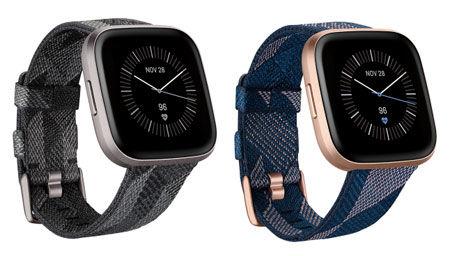 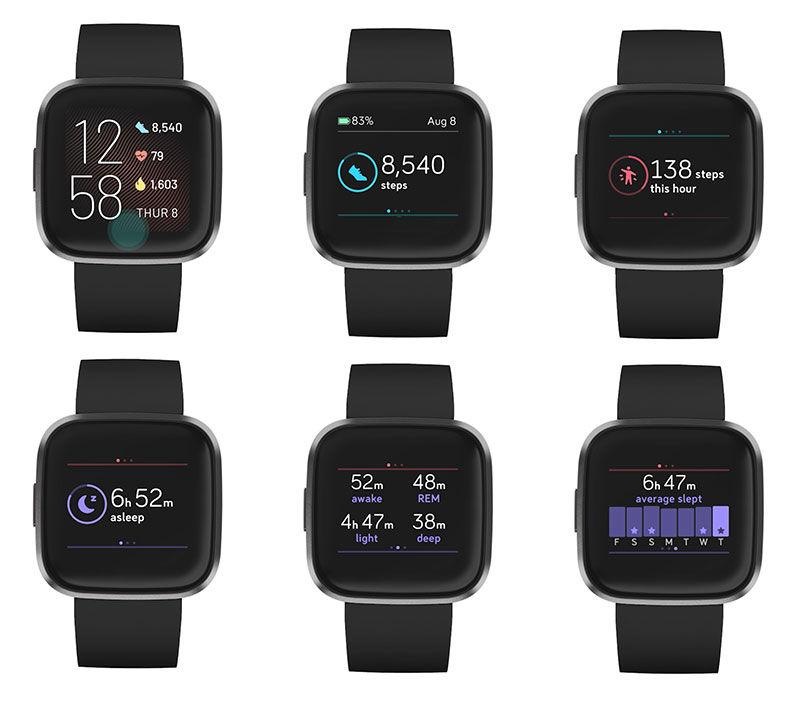 As such, it is more than just an activity tracker. It should motivate you to exercise more, but also looks deeper into other aspects of your health.

It will automatically record select exercises such as swimming, running and aerobic workouts, and offers on-screen video workouts, which can be supplemented with a subscription to Fitbit Premium.

The Versa 2 doesn’t include a built-in GPS – for that you need the top-end Fitbit Sense, Versa 3 and the Fitbit Charge 4 – but you can connect to your phone’s GPS to track real-time pace and distance.

Monitoring your heart rate is important for your health. One in four deaths in the US occurs as a result of heart disease. It can also be used to motivate you to exercise harder and lose weight.

The Versa 2 tracks your current and resting heart rate. Your resting heart rate will likely be between 60 and 100 beats per minute. Athletes usually rest at under 60 as their hearts need to beat less to keep the body going. Your heart rate increases during exercise, and Fitbit shows this by labelling heart-rate zones such as Fat Burn, Cardio and Peak.

The Versa 3 has an enhanced, more accurate heart-rate monitor, but I found the Versa 2’s reliable.

The quality of your sleep is increasingly regarded as a major factor in human health, and the Versa gives detailed information about how you have slept – measuring the length of Sleep Stages (Light, REM and Deep) and giving a Sleep Score on quality.

Other wellness features include Guided Breathing sessions right there on the wrist, getting in tune with your heart rate.

Read our full feature to learn more about all the Fitbit scores and measurements.

Integrations with Spotify and Amazon Alexa are the headline new features of the Versa 2, along with the introduction of Fitbit Pay as a standard feature and a new processor to keep it all ticking along a little faster.

One non-fitness feature we love is Notifications for Caller ID, texts and calendar events. An incoming notification causes the Fitbit to vibrate. It hides after a while and you can later swipe down to show all notifications. Android users can send quick replies in text and emojis via the watch, or use the microphone to respond by voice. This isn’t yet a feature on the iPhone.

Music controls let you play and pause songs via Bluetooth headphones, without having to use your phone. Apps from Spotify and Deezer are included, and you can transfer songs from Apple Music.

Fitbit Pay is a contactless payment system much like Apple Pay or Google Pay. While most people are happy enough with these phone-based pay systems, Fitbit Pay means you can go out shopping without your wallet or phone.

The first Versa was always a great activity tracker, so it’s not too surprising that the Versa 2 hasn’t changed too much there, with the company instead focussing its efforts on bolstering the smartwatch side of things. Alexa and Spotify integration are a great start, but the Fitbit app ecosystem still lags a long way behind Android Wear or Apple’s watchOS, so there’s definitely still some catching up to do.

Designed to be better

At first glance the Fitbit Versa 2 looks pretty similar to the first Versa, but it’s not long before you notice how many little details add up to a big upgrade. Read our Versa vs Versa 2 review and Fitbit Versa 2 vs Versa 3 comparison.

It boasts the same ‘squircle’ display, but it’s now eight percent larger, reaching a little closer to the edges of the body – though this is still a long way from bezel-less. It also squeezes out the Fitbit logo from the front of the device, a welcome move towards an uninterrupted front.

That screen is now AMOLED too. That means better contrast and deeper blacks, but also helps the Versa 2 hit a 5+ day battery life, up from 4+ days last time around. The AMOLED panel means Fitbit also introduced the option of an always-on display so you can actually have the time on the screen the whole time (y’know, like a watch – technology, eh?) though this will drag battery life back down to 2+ days.

The edges and rear of the device have both been rounded out and given a more polished look, while the Versa’s three physical buttons have been slimmed down to just one on the left-hand side. That’s a welcome change, as the other two were only used as shortcuts for functionality you could get to quickly enough anyway, so really didn’t need to be there.

The result is a watch that still looks unmistakably like the original Versa, but feels more modern and a little more premium – right down to the fact that the join between the watchband and the body is just a tiny bit more seamless than before.

Speaking of which, the Versa 2 is compatible with any existing Versa or Versa Lite bands, but also launches with a new range of accessories of its own, from £24.99. 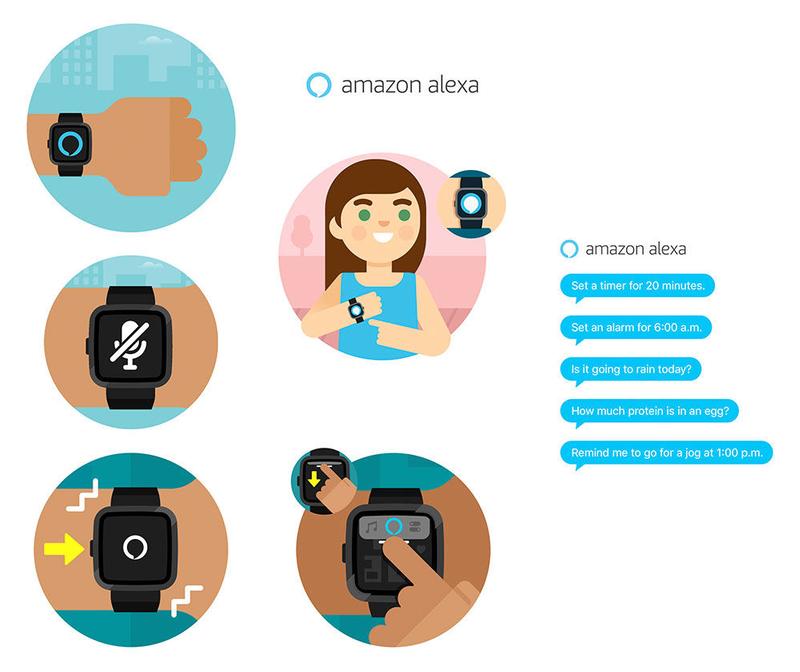 The Versa 2 has a built-in microphone to power voice features. Thankfully, it is on only when you are using a voice feature, such as Amazon’s Alexa voice assistant. You can also disable the mic entirely for all voice features in Settings.

You wake Alexa by pressing and holding the Versa’s button until Alexa appears on the screen – or via the watch’s Control Centre (swipe down) if the button is set to Fitbit Pay.

Alexa’s uses are yet to be proved as groundbreaking, but it is used mostly for asking for information, checking the weather and of course listening to music on Echo speakers.

On the Fitbit Versa 2, Alexa can help you set reminders and alarms with just your voice. Note that the alarm is not on Fitbit’s list but Alexa’s own. You can also control compatible speakers and lightbulbs etc, although this feature is currently available in the US only.

You need to have an Amazon account to use Alexa. 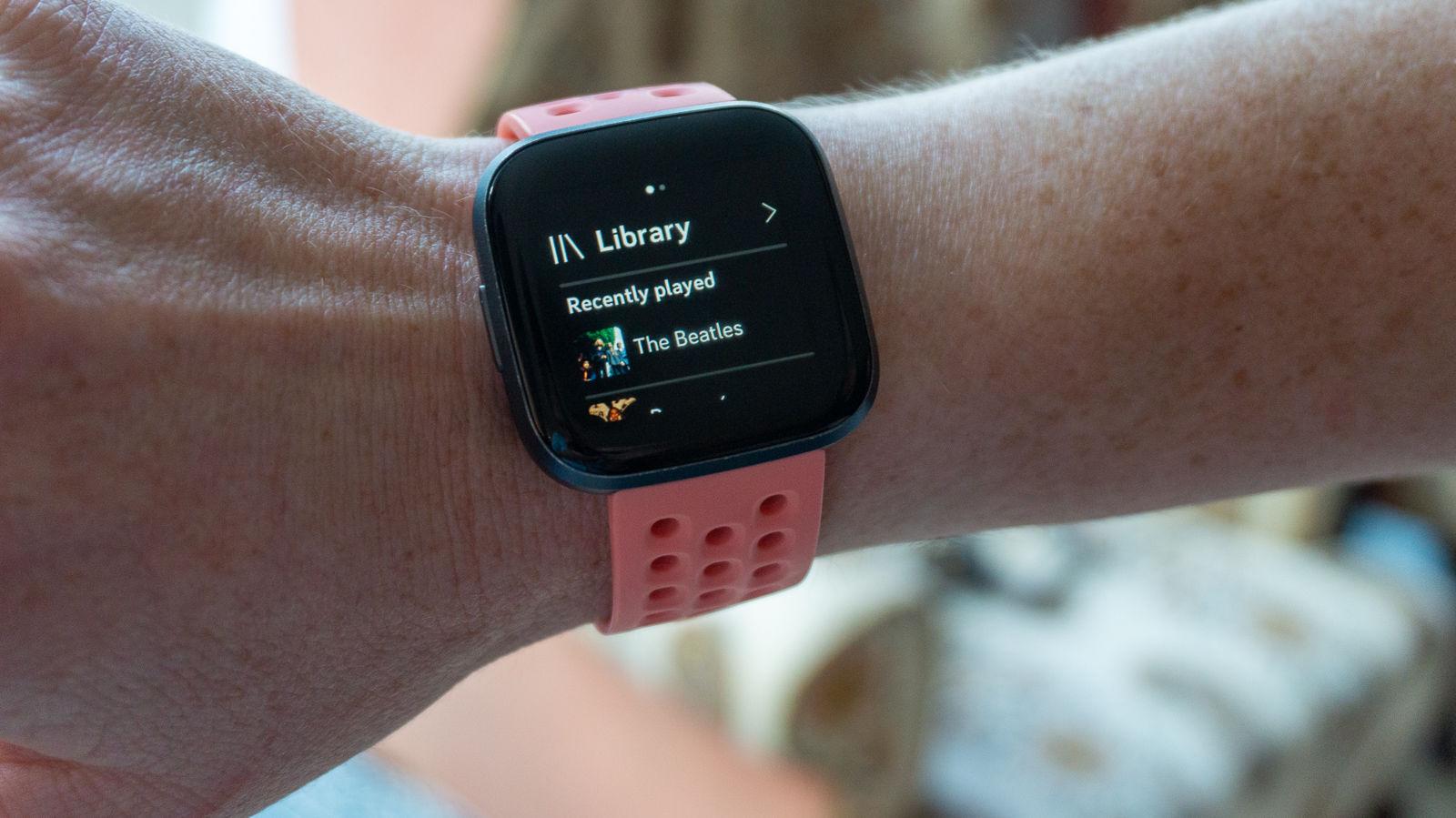 The Spotify app will come as standard, letting you stream your favourite music, playlists, or podcasts, but it comes with one big caveat: it’s only a portal to control Spotify on your phone, speaker, or another smart device. That means it’ll only work if you have your phone or another device nearby – you can’t download anything from Spotify to the Versa 2 itself to take out on a run with you, though you still transfer tracks over within Fitbit’s own music app.

One minor quibble is that – despite including Alexa – there’s no support for Amazon Music, so it’s bad luck if you’ve gone all-in on the Amazon ecosystem. 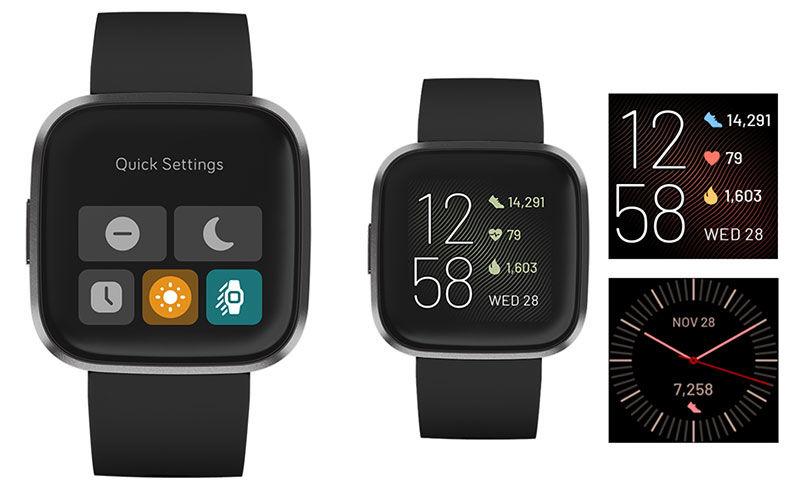 Swipe left for apps, such as Exercise where you can choose from Run, Bike, Weights, Swim, Treadmill, Interval Timer and Workout.

Swiping down reveals those ket health stats such as Steps, Heart Rate, Weight and Sleep. You can swipe over each stat to see more details.

The Fitbit’s Control Centre is reached by swiping down. Here you can get to Music Control and Payments, plus Quick Settings such as Sleep Mode for temporarily muting Notifications, Do Not Disturb, Brightness, and Always-On Display if you need the screen to be on at all times (note that this will reduce battery life).

The watch comes with a range of clock faces, which you can swap between using the Fitbit app, and you can buy others from third-party developers.

The Versa 2 boasts 6+ days of battery life – blowing away the 18-hour Apple Watch, which is no good for sleep tracking.

Fitbit has an annoying delight in designing a new battery charger with every single one of its tracker models, and we were astounded that – yet again – there’s a new one for the Versa 2, which doesn’t fit the original Versa charger.

This won’t bother most people, but if you have a Versa or two in your household then sharing chargers between models would be a great help. Note to Fitbit: the Ionic’s magnetic charger is the best.

Find out  how to get longer Fitbit battery life on the Versa 2 and other trackers.

If you already own the original Versa then the Versa 2 won’t look like a dramatic upgrade unless you’re really keen on chatting to Alexa from your wrist.

For new users though, the Versa 2 is a compelling option at the cheaper end of the smartwatch spectrum. If having a GPS built-in is important to you (rather than the Versa’s connected GPS), you should consider the Fitbit Ionic or cheaper Fitbit Charge 4.

Comprehensive fitness tracking, slicker design, and support for two major services in Spotify and Alexa (even if the rest of the app ecosystem isn’t there yet) make the Versa 2 an appealing option for a health and fitness smartwatch.