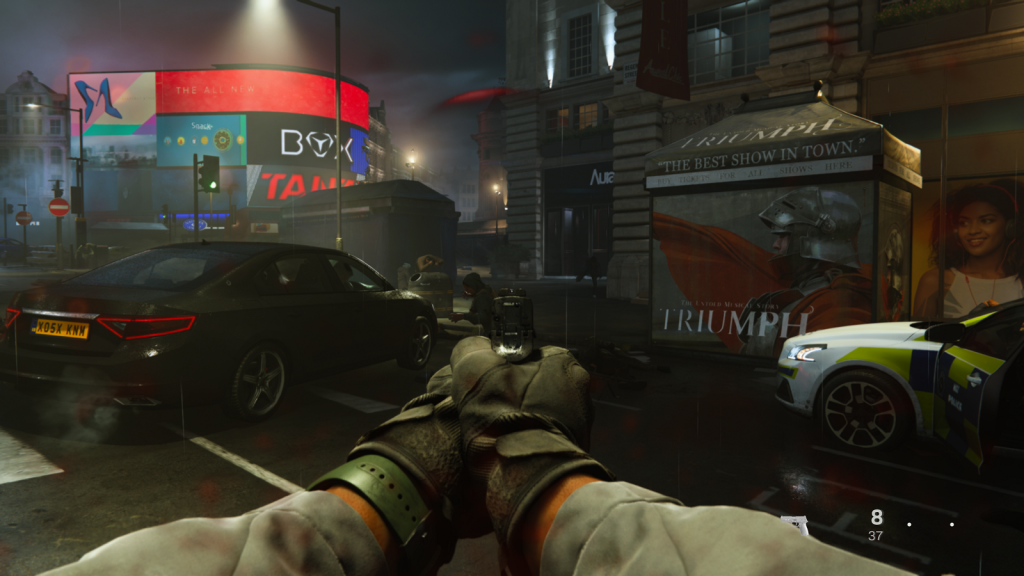 This is a stunning return to form for a franchise that many people were just about ready to write off. By being big and bold with the return of its most successful tentpole, Activision has given a new lease of life to the shooter. The single player campaign, “regular” multiplayer and even the sublime 2 v 2 Gunfight mode are great reasons to re-up if you’ve been away from the series for a while. However, the disappointing Spec Ops mode and the Battlefield aping Ground War are a reminder of the feature creep that made the series start to struggle. Call of Duty: Modern Warfare is worth your time and effort, even if there are some parts of the package that let it down, and a few more moments that speak of a desire to stoke controversy, rather than entertain.

Whether you’re calling in remote-controlled planes full of explosives, charging the enemy team with a P90, or wailing with despair as your four-person fireteam has been ambushed by yet another heavily-armoured Juggernaut, it’s immediately apparent just how much fun Call of Duty: Modern Warfare is.

The game is slickly produced, with incredible graphics, butter-smooth movement and a slow-moving river of upgrades that make it feel like I can level up every single aspect in the game forever and be rewarded.

But it is also trash.

Are we the bad guys?

Trash, in this context, isn’t a bad thing. Sat in front of Call of Duty: Modern Warfare, I find myself constantly grinning in much the same way I would while watching, say, Jason Statham and Dwayne Johnson leather a room full of goons while bickering.

Don’t like summer tentpole action movies? Call of Duty: Modern Warfare is the pop-culture equivalent of junk food. It’s impeccably produced, and as forgettable as the last McBurger I ate, and I… reader, I eat a lot of McDonald’s.

There’s no shame in this. The game’s five to six hours of campaign delivers a variety of kills and thrills during its runtime, punctuated with a few set pieces that I’ve been thinking about for the last few days. Meanwhile the multiplayer is fun enough to keep me invested, allowing gun and character upgrades through play, meaning i’m constantly unlocking new bits and pieces for just about everything. 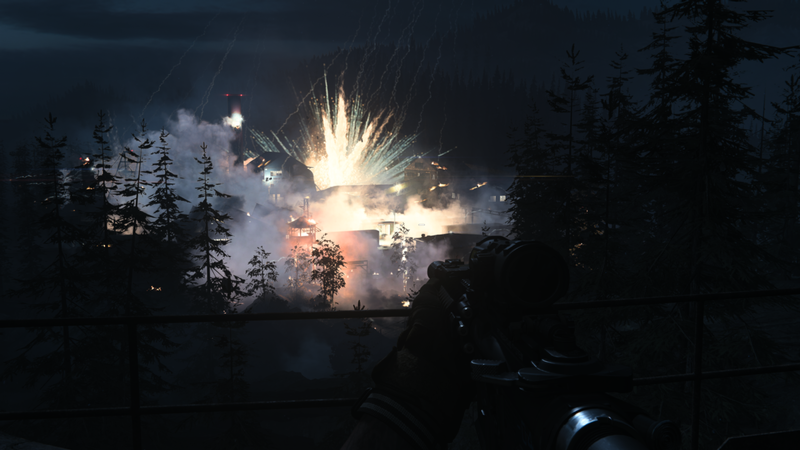 Unfortunately, Modern Warfare doesn’t seem to notice this, and one of the very few missteps that it makes with its single-player campaign is constantly skewing the game towards ever grittier moments and doesn’t necessarily know when to pull its punches: the game’s opening seconds see a suicide bomber stepping out into Piccadilly Circus, while a level minutes later has you trying to fight through the rubble of that attack, moments after detonation, culminating in your newly met commanding officer, the heroic Captain John Price, hurling an innocent man strapped into an explosive vest from a balcony to ensure he didn’t harm anyone else when he exploded.

This… is this what heroes are supposed to do? The theme of heroes doing what they need to do to keep the world safe, even if it isn’t palatable runs throughout the campaign, and can be used to handwave a lot of moments, from the city boy getting tossed off of a balcony, or a gas attack that calls to mind the original Modern Warfare’s iconic mission set in the aftermath of a nuclear bomb.

It’s the same line of logic that is used to defend a segment when a pre-teen child, moments after fleeing from a separate but just as brutal gas attack, then has to play a murderous game of hide and seek with a Russian commando, which leads to her stabbing him to death as you tap the right trigger. The same logic that you use when you hold a revolver to the head of a terrorist’s family and friend.

I’ll bite. I don’t think the tone is too jarring, so much as there’s some reverberating discomfort around the game. There are choices here that I think are a little bit too much for me, choices that are going to be picked up the media, myself included in this very review, and are going to be difficult for Infinity Ward to explain. 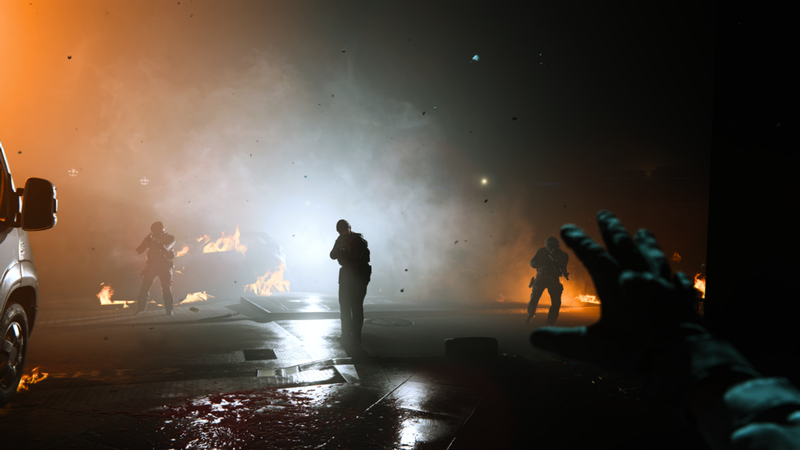 But I think it all hangs together as a cohesive work, even if it sometimes goes too far for my taste. If this sound like it might be the same for you, Ghost Recon: Breakpoint might be a better choice.

However none of this explains why halfway through the campaign, you play as a captured woman who is being waterboarded, and the game makes it into a minigame. “Use your right stick to turn your head away from the water, and then click L3 to breath” the game tells you joyously, the screen fading to black as you lose consciousness.

It sounds more shocking laid out here compared to when you play it, but, like the series’ early adventures in controversy stirring with Modern Warfare 2’s “No Russian”, it’s hard to see what the torture sequences in “Captive” really add to the game, beyond being able to try and whip up some empathy with a quick bit of torture.

Farah, the female leader of a cell of insurgents that is working with the SAS and CIA to try and solve the overarching plot I don’t want to spoil more than I have here, is one of the most interesting characters in a game filled with two-dimensional action hero cutouts.

It’s just a shame that the chosen way for Infinity Ward to explore that is to put her in incredibly grim situations, while the male characters are often defined largely by how nice their facial hair is in the cutscenes. On the subject of that, it’s worth noting that the facial hair is nice that it’s the best I’ve seen in video games up to this point, but still, would it have been that nice if they had been waterboarded instead? It’s hard to say. 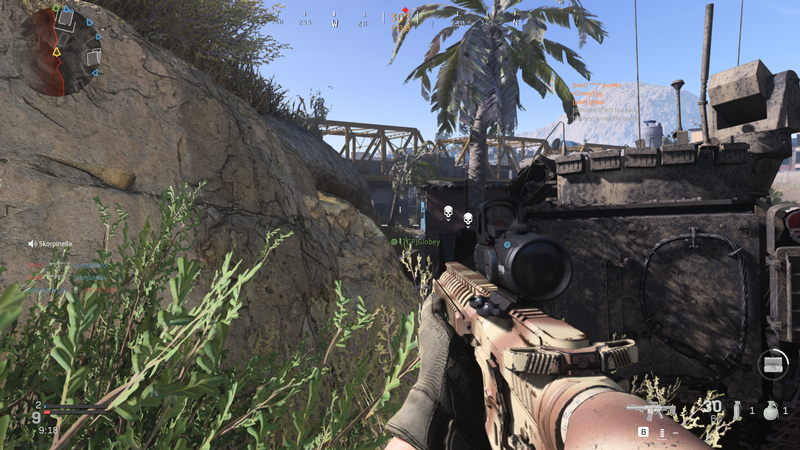 In spite of this seemingly deliberate controversy baiting, the campaign is a success. Highlight levels have you creeping through a Camden townhouse to disassemble a terrorist cell, storming into a besieged embassy to extract a high-value prisoner and even blasting your way through a hospital.

When things are going well, Modern Warfare is pitch-perfect, bringing just enough bombast to the table to make it feel like you’re right back in the cineplex, playing your role in a huge action movie.

The game’s multiplayer mode is the best that it has felt in years, too. Gone are the operators from last year’s Black Ops 4, but in their place is a slightly slower-paced game, with an emphasis on teamplay and decisive movement rather than charging around the place firing a submachine gun from the hip – although, of course, you’re free to do that too.

Create-A-Class is instantly recognisable: you pick three perks, a side arm, a tactical grenade and a primary weapon. There are a wealth of attachments for each gun available now, so you’ll have to fiddle with them in the gunsmith, but each gun can hold a maximum of five attachments. These can be scopes, suppressors, extended magazines or a perk that lets you reload faster.

There’s a lot of flexibility here, and as a result, the different playstyles that can be catered for are pretty substantial. Team Deathmatch, Headquarters and even the new Search & Destroy-alike Cyber Attack are all instantly familiar and as comfortable as putting on a pair of well-loved jogging bottoms.

This sentiment derails slightly with the Battlefield-esque Ground War mode, which can have anywhere from 64 to 100 people fighting it out over huge maps, with rigid objective-based spawns, a squad system and even armoured vehicles and helicopters. Sadly, this isn’t the game Call of Duty was ever supposed to be, and there are numerous teething issues.

Ground War players will still earn killstreaks, and with up to 50 players on each team all taking potshots at the other 50 players, it’s not long before destructive killstreaks like cruise missiles, VTOL jets, stealth bombers and even player-controlled gunships are raining down fire from the skies, turning any defeat into a miserable experience. 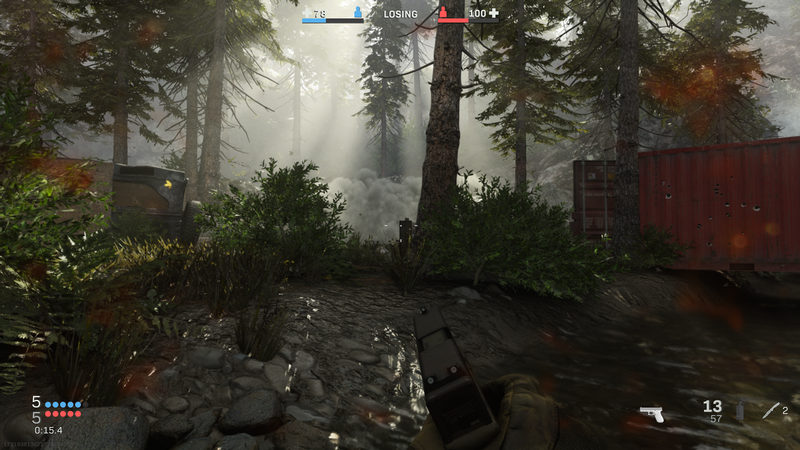 If that doesn’t happen, you can experiment to see what affect small arms fire has on an armoured vehicle – ever the diligent journalist, I tested this and found the effect to be negligible – or see the beauty of Call of Duty: Modern Warfare’s slick movement for an extended time as you run for a few solid minutes to get back into the action.

It feels like Battlefield in a lot of ways, except that Ground War seems to have replicated all of the bad parts: getting sniped from every rooftop ever, getting hunted down and killed by armoured vehicles you didn’t bring the kit to defeat and running a lot, distilling this into some sort of not-fun broth.

The core part of the experience is there in that the moving and the shooting still feels divine, but this will need serious work done before I can recommend it compared to the more regular offerings.

On the flip side, the other big idea from the team is the 2 v 2 one-death-and-you’re-out Gunfight mode, which gives each player identical weapons and then has the two teams fight to the death without regenerating health.

There’s no other way to address this than to say that it is bloody excellent. It’s much more tense than the more standard multiplayer experience, but the payoff for the extra stress is the elation of taking out both enemies in a burst of gunfire, or surviving against the odds to win the final round of a match.

The return of the fan favourite Spec Ops mode also struggles, in that it isn’t so much a return of a fan favourite mode as a horde mode with objectives, an attempt to distil the madness of Call of Duty’s multiplayer into a four-player co-op setting.

One level, which reenacts Modern Warfare’s classic epilogue “Mile High Club” as just part of a cornucopia of delights, is a highlight. The rest of the levels on offer, purportedly there to further the base game’s story, don’t seem to pick up the urgency of either the game’s campaign or the pace of the original Spec Ops mode.

Check out the best upcoming games and our Shenmue 3 preview.

This was the last-chance saloon for the Call of Duty franchise. For the last few years, sales have declined and the relevance of a huge CoD release has dwindled somewhat. This happens time and time again, of course. Empires fall, especially in video games, otherwise we would all still be playing Tony Hawks Pro Skater and Duke Nukem.

But rather than go off into the night, Call of Duty has pulled off the impossible and rebooted the biggest individual brand, with a package that Modern Warfare fans will have to get their teeth stuck into because of the sheer nostalgic respect lavished on the original game, while new players will quickly be drawn in by the technothriller action and the stellar production values.

The campaign has something to say, even if it isn’t necessarily presented in the most respectful way and the multiplayer will provide you with something to do as soon as that is over. I want to see more of this world, I just really really wish they hadn’t turned waterboarding into a minigame.

In spite of some truly puzzling decisions, I really like Call of Duty: Modern Warfare. But then again, I’ve always liked fast food, too.