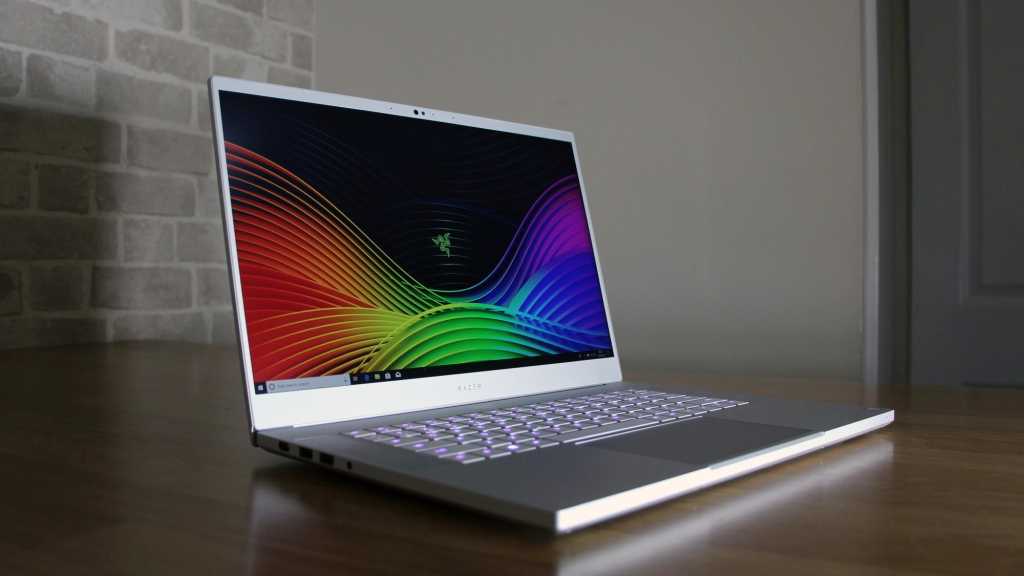 The addition of an RTX 2070 Max-Q and an impressive 240Hz screen make the latest Blade an excellent – if expensive – option for esports and conventional gaming. Razer has improved this machine’s thermal performance, too, and the exterior remains one of the slimmest and sleekest on the market. Just be aware that the Blade is not cheap – and its keyboard won’t sate some serious players.

On the outside, this new Blade 15 doesn’t look much different from Razer’s award-winning predecessor: it’s still stunning, but not much has changed. Instead of tweaking the looks, Razer has concentrated on the internals. That means big upgrades: new graphics cards and CPUs, and a 240Hz screen that’s perfect for esports.

That sounds great, but prices have increased – this model costs £2,530 or $2,650, and some are more expensive. Is the Blade 15 still worth it? Here’s our full in-depth review.

The updated Blade 15 comes in several configurations and it’s called the ‘Advanced Model’ but it’s generally known and the 2019 edition, too. Our model includes an Nvidia GeForce RTX 2070 Max-Q graphics card, a 9th-gen Intel Core i7 CPU and a Full HD 240Hz screen.

View all the models at Razer and you can also but them from Amazon.

The Blade has strong competition from the Alienware m15. That machine also uses the RTX 2070 Max-Q and has 9th-gen CPUs, and it’s available with 144Hz or 240Hz Full HD screens or 4K 60Hz panels.

There’s not much difference in price between the Blade and an equivalent Alienware: the m15 with the same specification costs £2,600 or $2,480.

Check out our chart of the  best gaming laptop.

Most of the Blade’s design features are unchanged. The machine is still built from anodized aluminium, with sleek lines, smart logos and no unnecessary extravagance. You’ve still got speaker grilles sandwiching the keyboard alongside slim bezels and a huge glass trackpad.

This machine uses Razer’s Mercury White finish, which is a limited-edition colour that debuted last year. This time around, it’s only available on the RTX 2070 machine with the 240Hz screen.

It looks fantastic – but it also makes the Blade looks rather like a MacBook Pro from 2006. Handily, every specification is available in a subtler black shade if you prefer.

The Blade is thicker than last year’s model, but it’s still svelte – 18mm thick and 355mm wide, and with a 2.15kg weight. That’s the same weight as the Alienware, and still a little bit slimmer and narrower than Dell’s machine – Dell owns Alienware if you’re not aware.

Build quality is fine, too: the base is rock-solid and there’s only a little give in the screen’s rear. We’d use a sleeve, but that’s prudent advice for any laptop at this price.

Around the edges the Blade delivers three USB 3.2 Gen 2 ports and a Thunderbolt 3 connection that also supports USB-C. There’s an HDMI output, a mini-DisplayPort connector and one audio jack, and Gigabit Ethernet is only included on entry-level models.

It’s a similar port allocation as the Alienware, although that machine goes further by offering Killer Gigabit Ethernet on all models.

The lack of exterior evolution on the Blade means its chiclet keyboard remains virtually unchanged. The keyboard looks smart, with per-key Chroma RGB LED backlighting and a white finish that matches the rest of the notebook.

The lighting is excellent: it’s supremely customisable, has 14 levels of brightness and can be synchronised with other Razer peripherals. Cleverly, pressing a function key highlights the options on the function row, and there’s a game mode to disable potentially ruinous buttons.

Razer’s keyboard does look the part, but it’s not without problems. Because this is a chiclet keyboard, the buttons don’t have the travel, weight or snap of more robust units. The keys only have around 1.2mm of travel, and their typing action is fast and light – but not particularly crisp. The Alienware m15 has more travel and feels more tactile.

Razer’s keys are fine for mainstream games, or slower titles. Casual esports players will get on fine for the most part too. However, serious competitive players – or just people who take their gaming seriously – will want a more robust gaming keyboard with more travel.

The Razer has its foibles elsewhere, too. There’s no numberpad – unlike the Alienware – and the cursor keys sit snug with the rest of the buttons, which can be awkward.

The glass touchpad remains vast, responsive and with full gesture support. It’s bigger than the Alienware’s pad. However, the two in-built buttons are too soft. It’s fine for using Windows and anyone who’s remotely serious about gaming should attach a USB gaming mouse.

The Blade’s Full HD screen has a stonking 240Hz refresh rate. That matches the top-spec Alienware, and it’s designed for esports – because it means screens will display games that run at 200fps and beyond.

Titles like Overwatch, Fortnite and CS:GO can run at those speeds, and having a better framerate and a more responsive screen can make the difference between winning and losing when you’re competing – because faster image processing means quicker reaction times. And, away from esports, it’s always a boon when you can make games smoother.

Most gaming laptops top out at 144Hz, so having nearly 100Hz of extra pace will help in competitive scenarios. Be aware, though, that most people will find that 144Hz is enough – at this end of the market only the keenest players will notice the jump to 240Hz, and you’re very much going to be getting diminishing returns. The Blade 15 also comes in 144Hz if you like.

Elsewhere, the panel has slim bezels and a matte finish. Sadly, there’s no Nvidia G-Sync. Gaming is already excellent on this screen, but it would have been even smoother with G-Sync tech.

Quality levels are good. The brightness level of 333cd/m2 is solid, and the black level of 0.27cd/m2 is good too – the former means punchy high-end tones, and the latter delivers dingy dark areas. They create a contrast ratio of 1,233:1, which is high enough to provide great punch and depth.

The Delta E of 1.91 is excellent, and the screen maintained reasonable uniformity. The only issue is the colour temperature, which sits at 8,560K. That’s warm, and it means that the screen has a slight red pall when brighter colours are viewed.

That won’t make a difference during games, though. Overall, the panel’s contrast, colour accuracy and brightness are great, and they deliver a punchy, satisfying gaming experience with loads of vibrancy.

One final recommendation: if you opt for the 4K OLED Blade 15, don’t assume that it’ll be good for HDR. That panel only adheres to VESA DisplayHDR 400, which is a low-end HDR standard that makes virtually no difference to content.

The speakers are loud and have impressive high-end punch, with clear tones at the top of the range and a crisp treble sound in the middle. Bass is very weak, though, and the speakers could still have a little more volume. We’d recommend a gaming headset.

Nevertheless, it’s powerful. It zipped through Ghost Recon: Wildlands’ Ultra benchmark at 52fps, which is seven frames better than the GTX 1070 in the Alienware m15 – and its Total War average of 69fps is three frames better. In 3DMark Sky Diver, the Razer’s result of 34,615 virtually matched the m15.

There’s plenty of power here – but what tasks can this GPU tackle? Happily, it’s able to run all of today’s top esports games at more than 200fps, which means gamers can take advantage of the 240Hz screen.

The RTX 2070 will also handle single-player games at solid framerates – as its Ghost Recon and Warhammer benchmarks demonstrate. There’s enough power to run mid-range ray-tracing, too, and you’ll be able to output to VR headsets as long as you tone down some settings.

However, this GPU won’t cope with 4K screens, widescreens or full-pelt VR.

The GPU is paired with a Core i7-9750H. It’s one of Intel’s latest processors, although there’s little difference between this part and the i7-8750H that’s found in many more machines. They both use Coffee Lake, and both have six Hyper-Threaded cores.

Alienware’s machine is consistently quicker, and this can be explained by Razer’s CPU throttling. In easier tests the Razer hit its all-core peak of 4GHz, but in tougher benchmarks the cores ran between 2.5GHz and 3.2GHz.

Nevertheless, the Razer handles gaming, daily multi-tasking and plenty of work tools – it’ll only struggle with high-end work tasks, like 4K video editing and CAD design. However, if you are interested in that kind of work, the Razer doesn’t have a Core i9 option – but the Alienware does.

Elsewhere, the Blade has up to a 512GB Samsung SSD that delivered impressive speeds of 3,277MB/s and 1,875MB/s. Connectivity is good, with Intel’s AX200 Wi-Fi 6 chip that can handle 802.11ac/ax alongside Bluetooth.

Last year’s Blade was loud and intensely hot. This year’s model is not perfect, but it’s better. Its internal temperatures are fine: in benchmarks and stress-tests the CPU and GPU peaked at 80 and 74 degrees.

During gaming, the Razer did produce fan noise and heat, but it’s not too bad: the noise is relatively modest and easy to drown out with speakers or a headset. There’s a little more noise during tough games, but it’s still not bad – a tad quieter than the Alienware. And, happily, the Blade stays impressively quiet and pretty cool during less demanding titles.

The underside, wrist-rest and the area above the keyboard do get toasty during intense gaming sessions, so we’d advise against using the Blade on your lap, or on a cushioned surface. But this is the same situation as the Alienware, and the Razer is a little better than last year’s model.

The Blade has a 65Wh battery, which is reduced from the 80Wh unit inside the older model but still bigger than the 60Wh power pack inside the Alienware m15.

In a video playback test with the screen dimmed to 120cd/m2, the 2019 Blade lasted for six hours and nineteen minutes. That’s about an hour longer than the Alienware, but almost two hours short of the older Blade.

In a gaming test the Razer lasted for almost 90 minutes. That’s not particularly good, and bear in mind that increasing the screen’s refresh rate will decrease battery life – especially pertinent with a 240Hz panel.

In short, anyone who wants to do proper high-end gaming on the Blade will need to plug in. If you’re away from the mains, you’ll only get a limited amount of low-end gaming done on this notebook.

The Blade 15’s big changes for 2019 come on the inside, and they’re mostly successful. The 240Hz screen offers incredible speed and good quality, and the refresh rate is great for esports. The RTX 2070 Max-Q has the pace to handle esports titles at this framerate, and it’s also got enough power for single-player gaming.

Impressively, thermal performance has also improved since last year – this machine is still loud and hot, but it’s not too bad and no worse than rivals. And the Blade continues to look the part, with a slim, attractive design that is more mature and modest than the Alienware.

The only hardware mis-step is the processor. It’s a solid chip that’s fine for gaming and everyday work, but it doesn’t reach its full potential due to throttling. If you need lashings of CPU pace, look elsewhere.

Smaller issues include the way the shallow chiclet keyboard won’t sate some gamers, mediocre battery life during gaming and the speakers lack bass.

Still, there’s a lot to like here: the graphical grunt and 240Hz display make the Blade an excellent machine for esports, and it’s a solid option for conventional games too. It’s also no more expensive than equivalent Alienware systems. If you’re after a stylish, sleek gaming option, the latest Blade is certainly a contender.