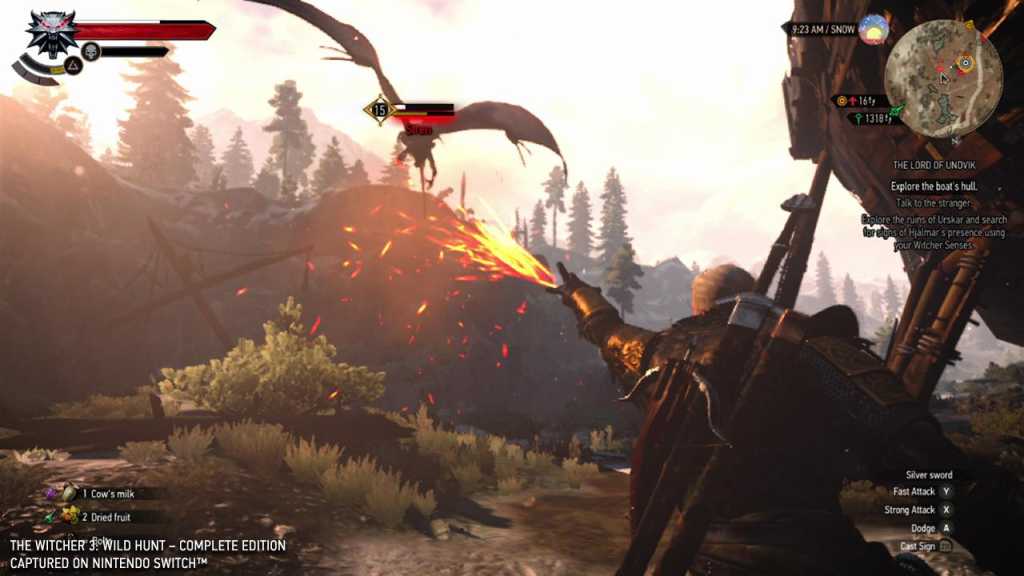 We’ll withhold our final judgment until the game is officially released, but we’ve got mixed feelings about Geralt’s appearance on the Switch right now.

Following huge success back in 2015, Geralt and Roach are set to make an appearance on the Nintendo Switch. The Witcher 3’s Complete Edition (featuring all DLC and expansions) will be available on Nintendo’s portable system, providing the first truly portable Witcher experience – but how does the Switch variant compare to its PC and console brethren?

We went along to Nintendo HQ and had a chance to explore the open world of The Witcher 3 on the Switch for ourselves, and here’s what we think of the upcoming game so far.

That’s because there’s only one variant of the game available physically for the Nintendo Switch, and unlike other standard games, it comes with a nice box, a map, stickers and other Witcher 3-themed goodies. It’s the same price as the digital version, if not a little cheaper, so why wouldn’t you grab the physical variant?

The Witcher 3: The Wild Hunt for Switch preview

Porting The Witcher 3 to the Nintendo Switch is no easy task; weighing in at over 70GB for the base game on PS4, CD Projekt Red certainly had its work cut out. The company managed to squeeze the game down to 32GB including not only the 16 pieces of DLC released in the weeks after the game’s launch, but the two fully-featured expansions – Hearts of Stone and Blood & Wine – too.

Interestingly, it’s the only 32GB Nintendo Switch cartridge apart from Dragon Quest in Japan. The best part is that unlike with most other variants of the game, the entire Witcher 3 game and accompanying DLC is available as soon as the cartridge is inserted, with no long download times for additional resources. 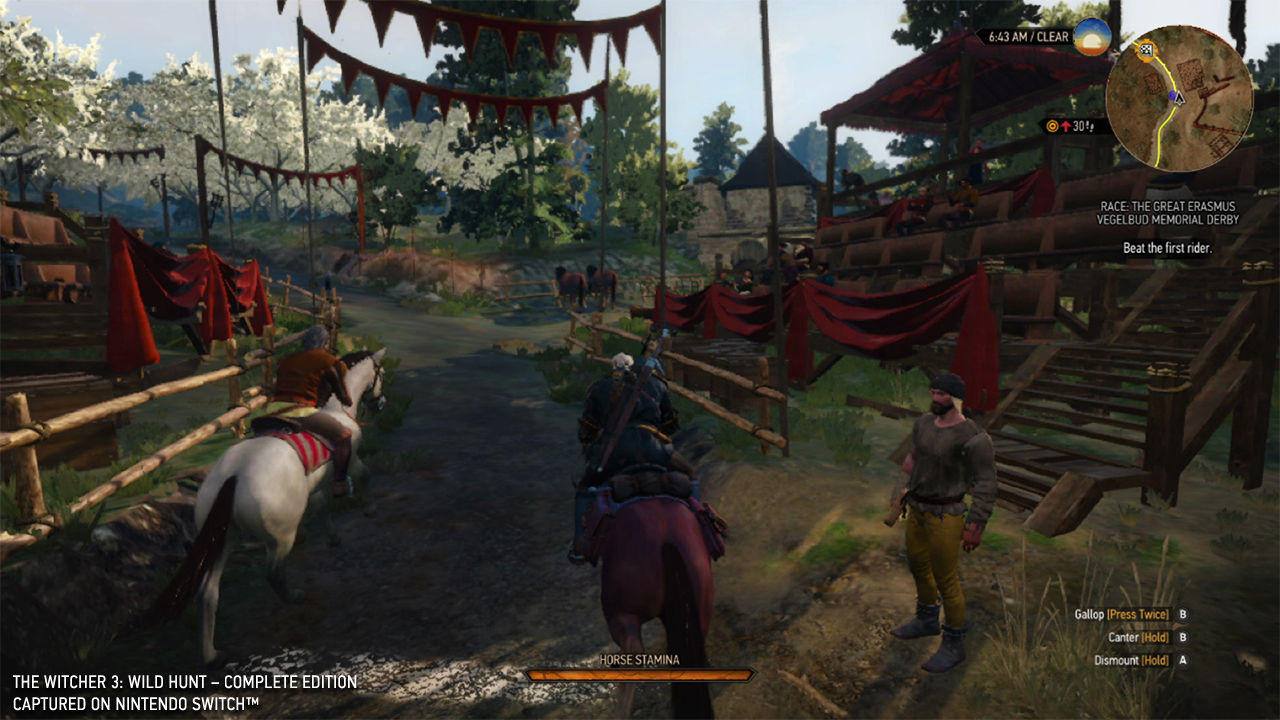 The good news is that after playing the Switch variant of The Witcher 3 (or Switcher for short) for a few hours, we can say that it really is does provide the true Witcher experience on-the-go, from the complex combat mechanics to the vast open-world waiting to be explored – all without loading screens or other tech that some may have expected the Switch variant of the game to feature. That’s pretty impressive, when you think about it.

The idea of being able to play The Witcher 3 anywhere, anytime, is appealing to us. The game offers a vast open-world with a lot to do alongside an engaging storyline and, crucially, buttery-smooth combat mechanics. We’re confident that it’s amongst the largest-scale open-world RPGs on the Nintendo Switch, and it’ll be a struggle to find a Switch game that offers more value for money than the Witcher 3 Ultimate Edition in 2019.

According to CD Projekt Red Senior Producer Piotr Chrzanowski, who we had a chat with during the event, the build available to Switch players is the same as that on the PS4. Whether you want to roam the countryside with Roach or get straight into demon-slaying in dark, dingy dungeons, you’re free to do whatever you like. 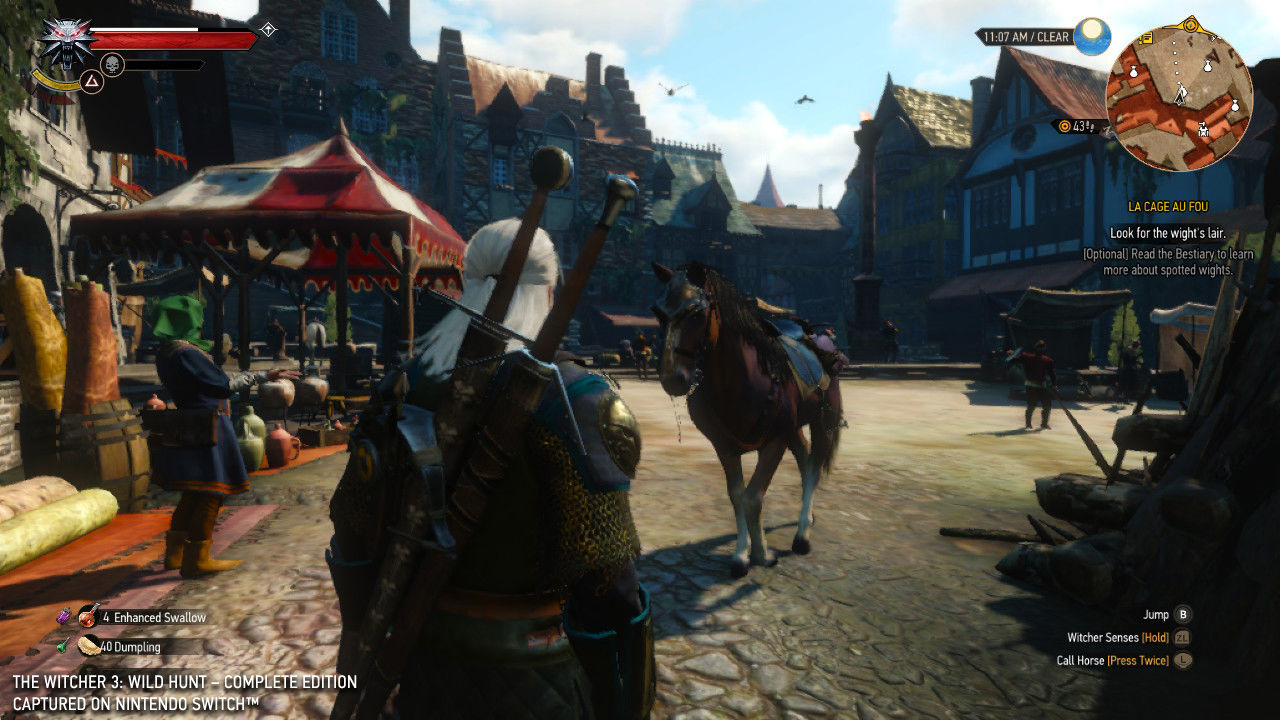 The control scheme mirrors that of its console counterparts exactly, and while that’s great news for existing fans of the game, it also means that the Switch variant doesn’t take advantage of the gyroscopes built into the Joy-Con controllers. You won’t find motion-controlled aiming like in Zelda: Breath of the Wild, or any fancy tricks using the HD Rumble motors.

That extends to content; it boasts the same content as that of other platforms, with no exclusive items for Switch players. Those hoping to see Roach wearing Mario’s signature red hat or Geralt in full Luigi getup will be sorely disappointed.

At this point, you may be wondering if you’ll be able to transfer your 30hr+ game save from PC or PS4 to the Nintendo Switch, but as confirmed by Piotr Chrzanowski during our hands-on, there are no plans to offer the feature. You’ll have to start all over again if you want to play on Switch, but that’s not a bad thing when a game is as impressive, engaging and immersive as The Witcher 3.

The only consolation comes with the fact that Switcher 3 is fully compatible with Nintendo’s cloud save system, allowing you to back up and transfer your saves between Switch consoles.

Of course, the only real difference between Switcher 3 and its console and PC counterparts is in the graphics department, and sadly, it’s more noticeable than you might’ve hoped. 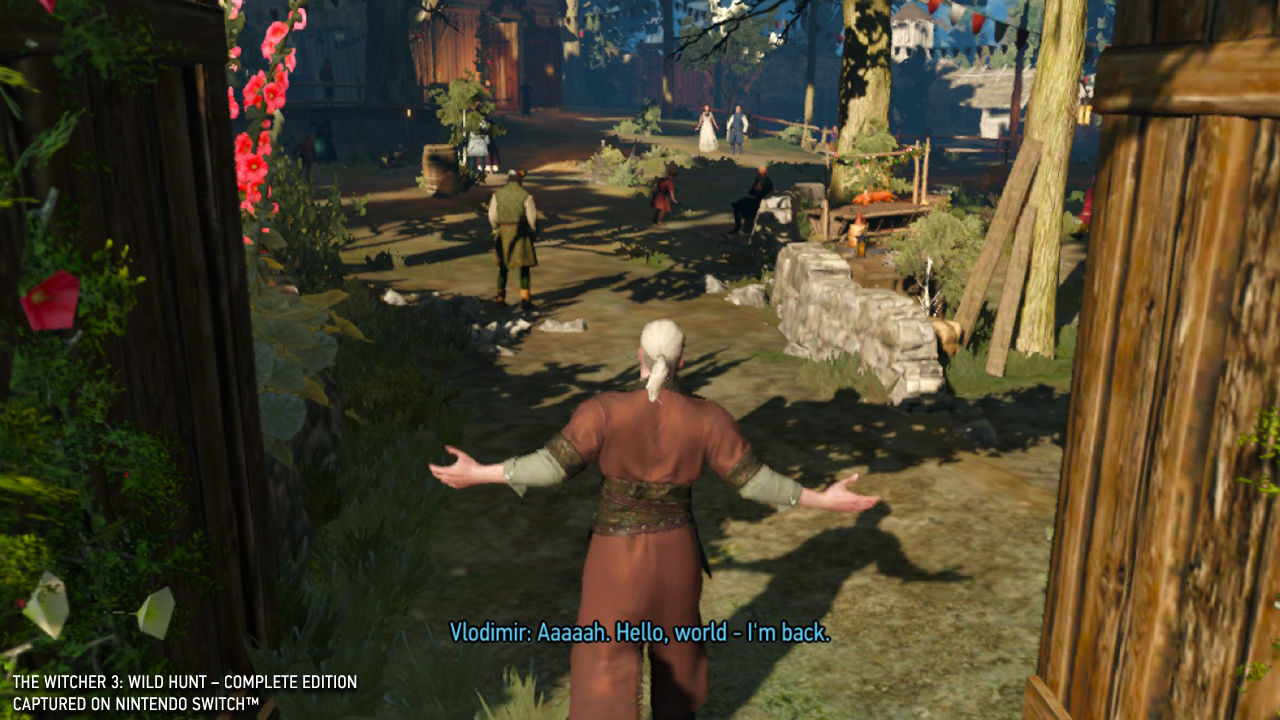 More specifically, there’s a noticeable difference in draw distance compared to console and PC, somewhat obviously, and looks like the development team seems to have tried to hide it using blur effects, making the environment in the distance look out-of-focus. It works, for the most part, but it also means that the world doesn’t look as sharp, crisp and inviting as it does on other platforms.

Everything looks soft, especially in densely populated cities, and while it manages a solid 30fps when scouting the countryside, we noticed a lot of lag when trying to fight – especially with powers – in a more densely-populated area. That is masked by motion blur, but we’ve found it to be far more aggressive than other variants of the game that we’ve played in the past.

Oh, and while the game is fully voice-acted in all supported languages, there is a slight difference in audio quality – particularly with non-important NPCs – and at points, the compression is audible.

The fact is, we can look past most of that and still enjoy the game. The real issue, for us, is that open-world RPGs like The Witcher 3 were never designed to be played on a small 6.2in screen, and it makes it hard to spot enemies from afar, locate loot crates and perform other RPG tasks. We just couldn’t get immersed into the world, and that might be because we’re “old”, but we think there’s more to it than that.

So, while The Switcher 3 provides the same detailed, lived-in world available on PS4, Xbox One and PC, don’t expect it to look – or even run – the same.