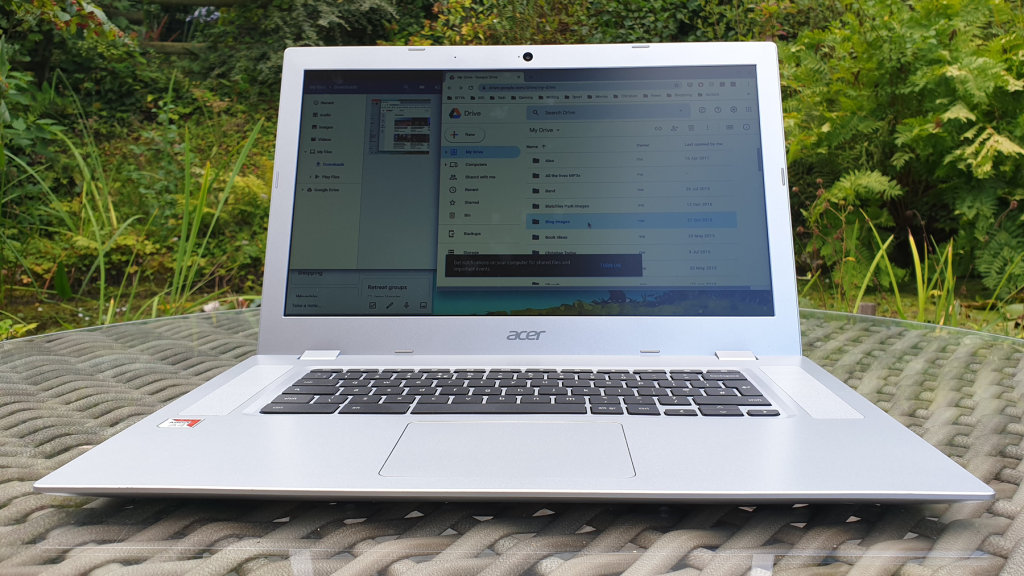 A large display might seem a big draw, but unfortunately the panel itself is dull and lifeless unless you have it turned up all the way. The keyboard is the main drawback though, regularly failing to register taps of the space bar and quickly becoming a huge frustration. The CB315 is cheap and that’s the main reason to buy it.

Chromebooks have often tended to adopt 11.6- and 13in display sizes, which makes them great for portability but can be a little small for some people. So, if you’ve yearned for a larger screen, the 2019  Acer Chromebook 15 could be a tempting proposition. We put through its paces to see if size really does matter.

For a full rundown of our favourite Google-powered laptops, take a look at the Best Chromebooks chart.

If you want more power then there’s the 1.8GHz AMD A6-9220C processor model which also sees the display quality bumped up to Full HD 1080p for £299/$399. There’s also a touchscreen variant (CB315-2HT) but at the time of writing we have no price or details of availability.

Acer doesn’t have a link for buying the CB315 on its UK site, but you can pick it up from Amazon, Argos, and Currys PC World.

US customers can buy the CB315-2H directly from Acer or retailers like Amazon or Best Buy.

As you might expect with a price under £300/$300 the case for the CB315 is plastic rather than metal. This isn’t necessarily a bad thing as it not only keeps down the cost but also the weight.

A ‘cross-hair brush pattern’ which emulates brushed aluminium adorns the lid. It looks smart and clean, giving the CB315 an aesthetic that belies it’s inexpensive nature. The same can’t be said when you lift the lid, as you’re greeted with an expanse of frosted grey/silver plastic that is not dissimilar to other devices in this price bracket.

It looks perfectly fine, but can’t hide the fact that it’s a cheap machine.

Typing on the keyboard is a spongy experience and we found the space bar regularly failed to register a press. We’re sure that over time an adjustment of technique would reduce the omissions, but this keyboard isn’t going to be at the top of anyone’s favourites list. That’s not the same for the trackpad though, which is responsive and accurate.

In our time with the CB315 we found the performance to be adequate rather than impressive. Again, if you’re working on Google Docs, Google Sheets, or similar productivity apps then everything is fine. Stream music in another tab and there are still no problems.

We did start to notice a dip once we switched from music to video in YouTube. The audio remained perfectly stable, but switching from one tab to another then back to the video often resulted in the picture being frozen for a second or two or suddenly speeding up to try and get back in sync with the soundtrack.

If you’re not bothered by this, and in reality it’s hardly the end of the world, then the CB315 can be relied on to deliver stable if uninspiring levels of performance. In our standard range of benchmarks it scored 38.08 in Jetstream 2 and 294.48 in Basemark 3.0, which puts it in the lower half of Chromebooks that we’ve tested so far.

The 15.6in TN panel has a maximum resolution of 1366×768, which is not uncommon on Chromebooks. For general word processing, spreadsheets and web browsing it’s a serviceable display, but that’s about the extent of it.

The pale, washed-out colours mean videos lack any kind of lustre, and the poor off-angle viewing negates using the CB315 as a TV replacement for more than one person. Brightness is weak too, with our meter registering a maximum of 207cd/m2.

Now, all of this has to be given the context of price. As this laptop can be picked up for around £250/$250 online, it’s unfair to expect stellar performance, IPS panels and 4K resolutions. So, if you are happy with a basic display that has little in the way of thrills, then this will let you get some work done and browse online without issue.

We’d say it’s probably worth spending the small amount extra to get the Full HD model – the CB315-2HT.

The pattern continues with the web-cam, which delivers grainy and pale video. Yes, it can be used in a pinch, but with a top resolution of 480p and generally underwhelming performance, there’s not much to make you want to spend any extended time on video chats if you want the person on the other end to see you clearly.

Acer may have cut corners on various elements of the CB315, but credit is due for the port selection.

There are two USB-C (version 3.1) connections available, one on either side, and both can be used to charge the laptop or connect it to external devices. There’s also a couple of standard USB 3 ports, a microUSB slot, 3.5mm headphone jack and even a Kensington Lock. Not bad at all.

Upward facing speakers reside on the flanks of the keys and project a surprising amount of volume. Mid and treble frequencies are distinct and well balanced but bass is distinctly lacking, which is a shame. If you’re watching reasonably talk-based media then it will be fine, but music and action movies won’t be as impressive.

Acer boasts a 10 hour battery life for the CB315, and while that could well be possible under certain conditions, our standard HD video loop test drained the device dry in seven hours and 38mins.

As you’re unlikely to be watching videos for an entire working day, this means that you should happily be able to remain productive on the device until late into the evening.

ChromeOS is a lightweight, easy to use operating system that is great for those who find Windows and macOS a bit complicated. As you’d expect from an OS developed by Google, it remains web-centric with most of its apps requiring an internet connection to work. That being said, there are plenty of useful offline apps too, with Google Docs, Sheets, and other productivity tools allowing you to work even when Wi-Fi hotspots go dark.

An added bonus for Chromebook users now is that many Android apps will also run on ChromeOS, bringing even more offline capabilities. The formatting can be hit and miss, with most still optimised for the tall displays of smartphones rather than the wider style of laptops, but it instantly expands the amount of applications available.

If you’re happy to live in the Google universe, and don’t need to plug many peripherals into your device, then ChromeOS is a very pleasant place to spend time. Thanks to constant updates and the nature of the OS, it’s also arguably safer than Windows, requires less maintenance, and negates the need for anti-virus software.

There’s a paucity of choice when it comes to Chromebooks with large displays. Therefore, the CB315 has an immediate advantage when appealing to those who prefer more real estate on their screens. The cost is also low enough to possibly make up for the average performance and dim, bland display.

But, the keyboard is a problem and one that became increasingly irritating the longer we spent with the device. Performance hiccups also left us feeling that while it might seem good on paper, we can’t recommend this laptop over most of the other ones that you’ll find in our best Chromebook chart.