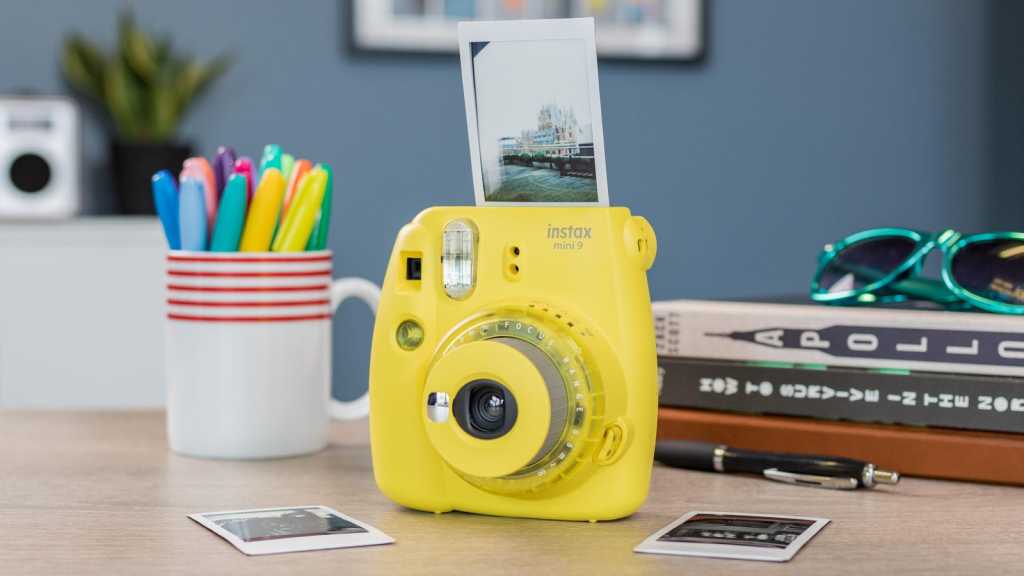 The Instax Mini 9 undercuts the instant camera competition massively, coming in as the cheapest model we’ve reviewed so far. It struggles in some lighting, but provided you’re looking for a budget camera that has the basic functions, this could be all you need.

Instant cameras come in all kinds of shapes, sizes and prices, but the Instax Mini 9 is a true entry-level version that’s affordable enough for the average joe. The product itself is a great option for anyone new to photography and just looking for a Polaroid-style camera that gets the job done.

It may not have some of the features that its closest rivals boast – a focus shot, a zoom, or any digital aspects at all – but then again it isn’t aimed at photography nuts. It’s designed to be fun and simple, both in its appearance and functionality.

The few features it does have however don’t always work how they’re supposed to, meaning that it relies on taking photos in the bright sunshine for the best quality. If this sounds like something that’s not up your street, then take a look at some of our further picks in our list of the best instant cameras.

The good news is that the Instax Mini 9 is available in abundance from most high street and online retailers. If you’re in the UK, you can buy it from the Fujifilm site, Amazon UK, Jessops and more. If you’re across the pond in the US, you can pick up your camera from places such as Amazon US, Target and BestBuy.

The RRP for the Instax Mini 9 is £64.99/$69.99, however there are some colours that are as cheap as £54.99/$51.98 on Amazon. The model that we’ve tested was the Clear Yellow model from the 2019 limited edition range, which includes three extra colour filters and a clear button as opposed to a matt one. Currently, there isn’t a difference between the RRP for the standard model and the limited edition, but check around as different sites have fluctuating prices. 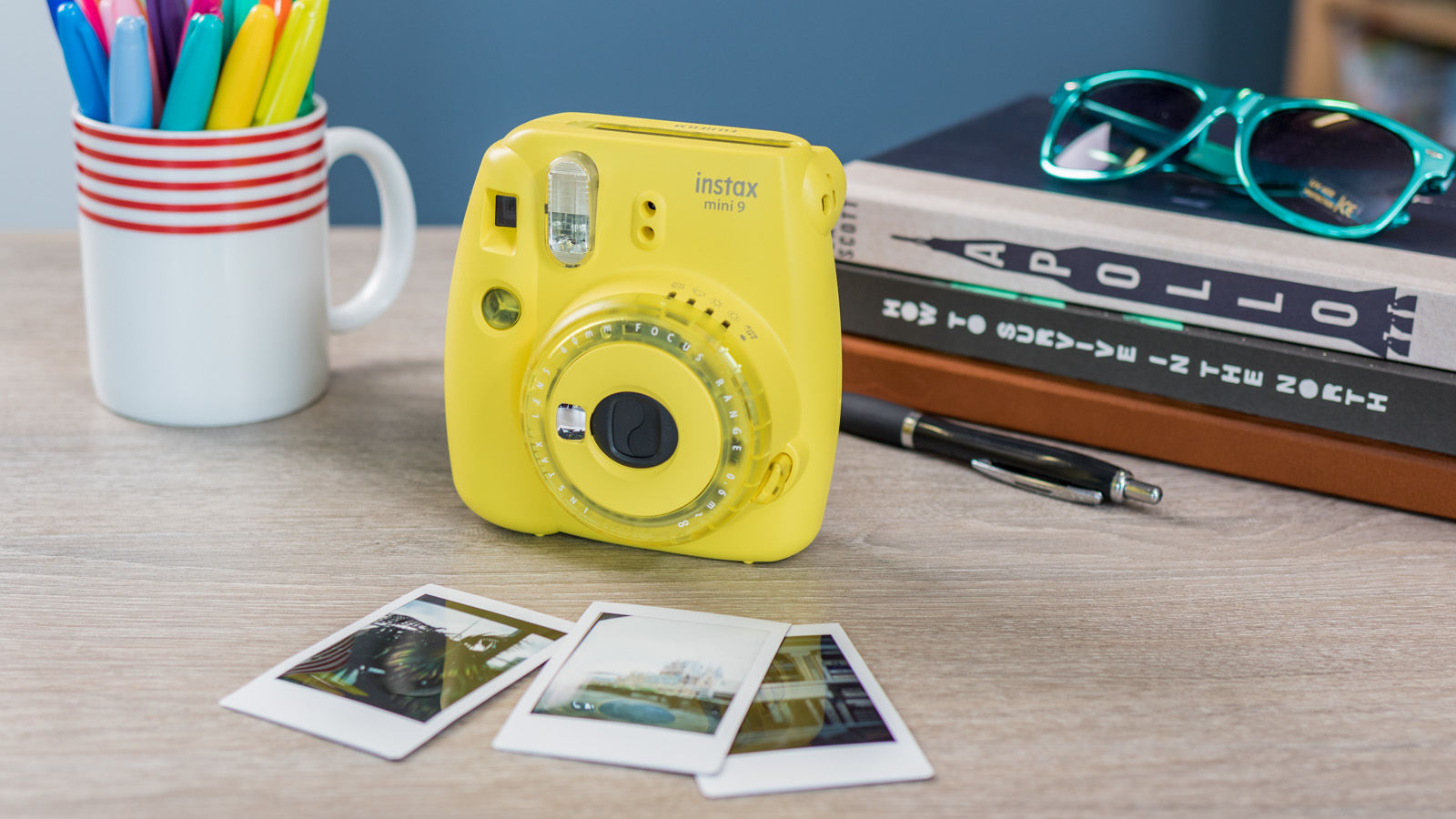 Naturally, you’ll need to add the cost of film into the overall price of the camera. Retailers do offer bundles with every colour, with the standard having a pack of ten shots with every camera. The RRP for this is around £74.99, depending on which colour you choose. In the US, the lowest bundle you can buy is a 60-shot film pack, which retails around $84.99 on Amazon. We highly recommend choosing one of these bundles, as the film by itself doesn’t come in cheap.

In short, the base camera is extremely affordable, but may end up a little more pricey to maintain if you use it on a regular basis.

Despite ‘mini’ being in the name, the camera itself has chunky features that give it an overall retro feel. However, it can still be used in one hand if needed. As it’s so smooth, it’s not the easiest to grip, but that problem can be rectified with the detachable wrist strap that’s included to avoid any nasty drops. Amazon also have matching camera cases and bags on sale for as little as £9.99/ $12.99.

The Mini 9 is very straightforward in its initial setup. Loading the film is simple – all you have to do is open the back of the camera and load the film pack in with the yellow tabs facing you. We had no issues with changing over packs once we’d gone through the first ten shots. The camera is powered by two AA alkaline batteries that should last for around 100 shots before they need replacing, so there’s no charger slot – and no option to re-charge it if the battery runs low. 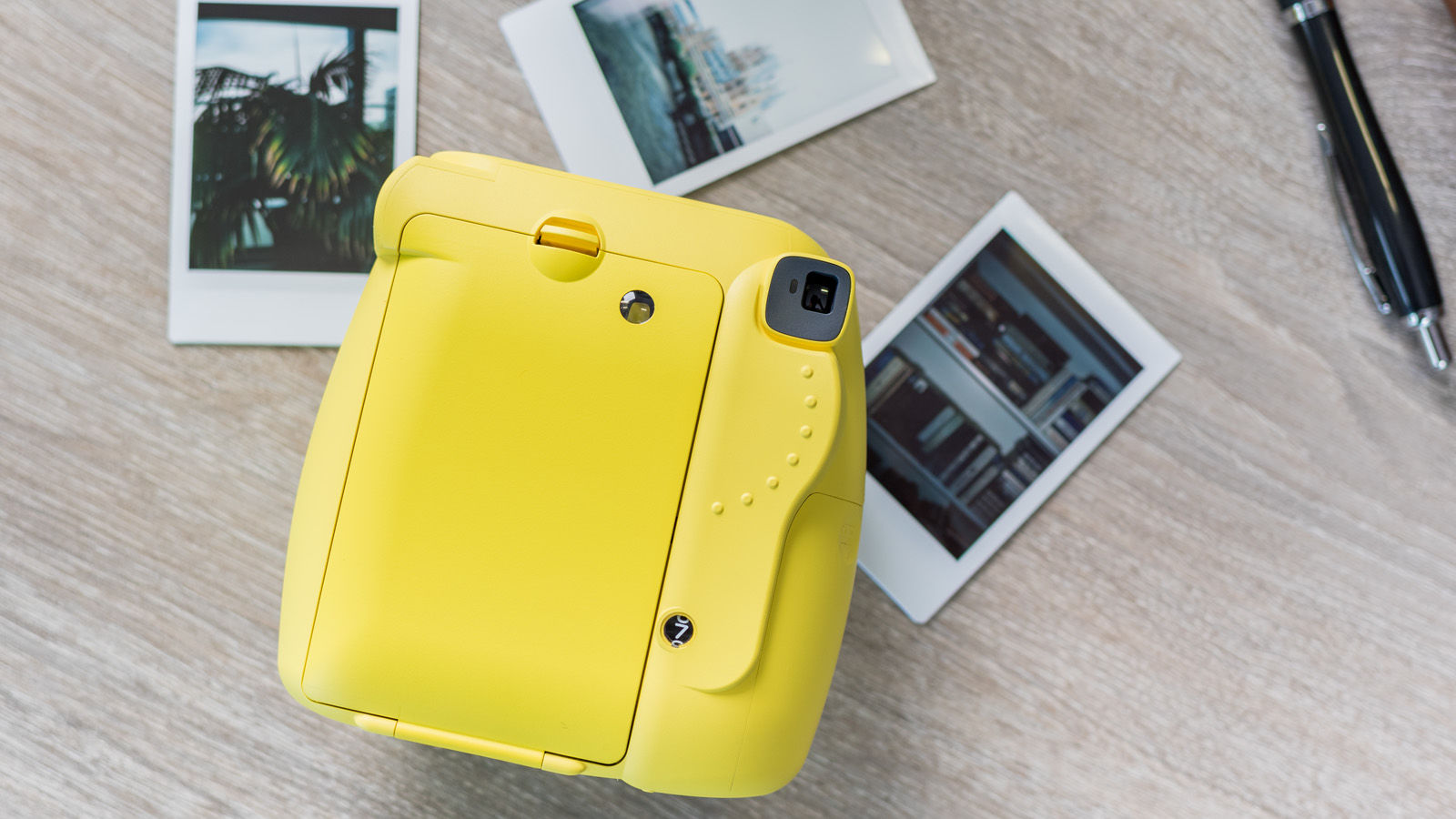 When the camera is off, the lens remains dormant and protectively closed off with a lens cover. Once you turn it on, the lens pops out and the camera needs a few seconds to load before you can start shooting. All images come out of the top of the camera in the film ejection slot on credit card sized Instax mini film (print size 54x86mm, image size 46x62mm).

In comparison to some other instant cameras – which tend to have a more ‘serious’ feel and darker tones – the exterior colours are a bold choice. But seeing as this budget model is targeted at a younger audience, it’s fitting for those who will be using it. There’s a range of colours to choose from, including pink, blue, white, green, red and the two limited edition models, yellow and purple.

This entry-level camera mainly does what it says on the tin (AKA point and shoot) and therefore comes with limited extra features. Each camera can be loaded with 10 sheets of film at a time, which will come in one film pack. You can keep track of how many photos you’ve taken on the film counter, located on the lower half of the back end of the camera.

There’s no screen, so you’re limited to the optical viewfinder if you want to preview anything when taking a shot. There’s also no extra features for storing images, such as a USB or SD card slot. Everything is done via the film packs. All shots will also use the flash, something to be aware of if you’re in public – there’s no option to disable it. 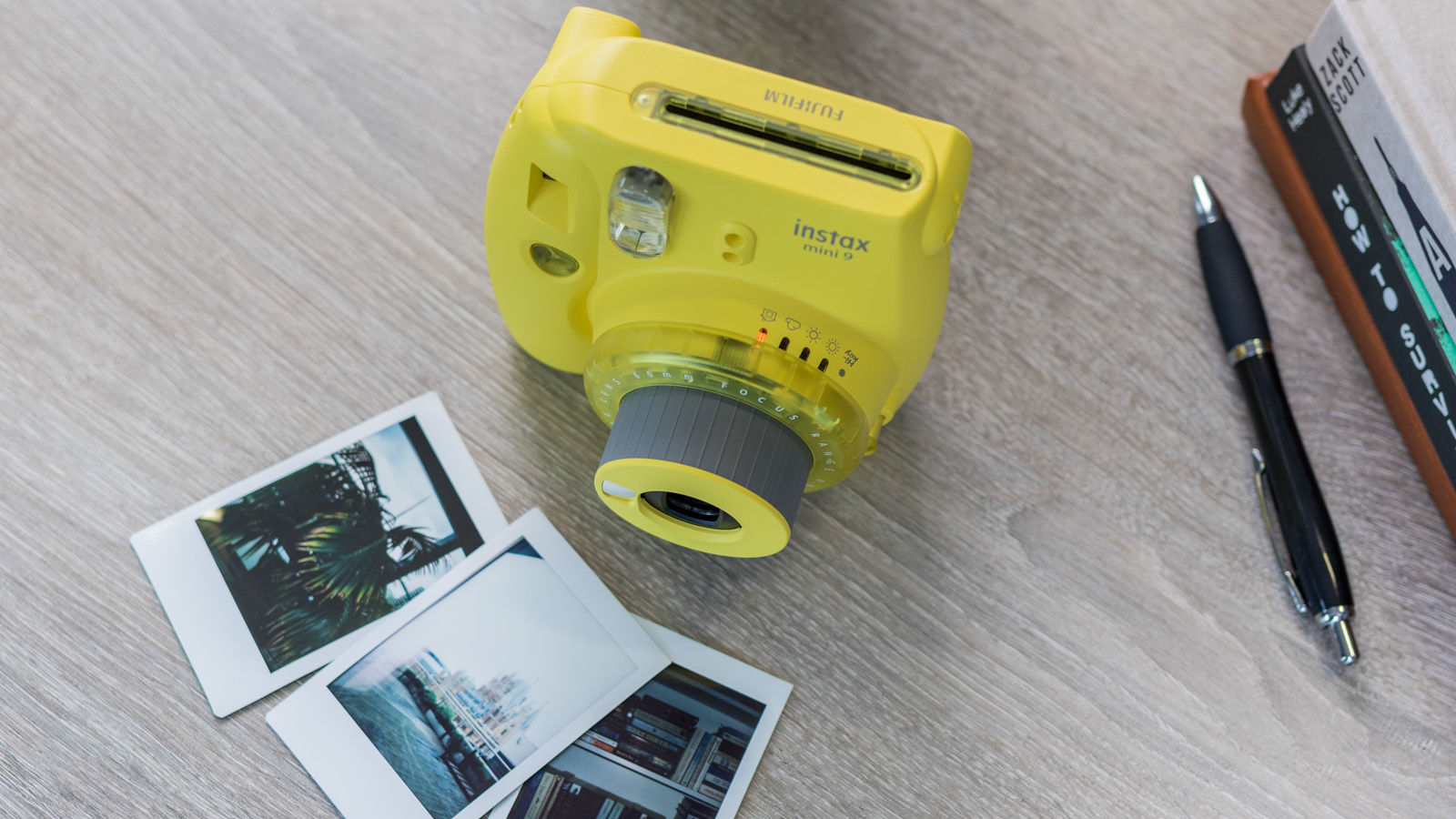 In terms of what else the Instax is missing, there’s no feature to manually adjust the focus of images, something that will either be a blessing or a curse depending on how serious of a photographer you are. Equally, there’s no way to zoom, bar actually getting up close and personal to whatever you want to shoot.

If you want to do that, you’ll need to switch to the close-up lens attachment, which you can use for any object that’s between 35 and 50cm away. You can also use this feature to take self-portraits – something that is easy to do with this camera with the nifty mirror included on the front of the camera.

Once you’ve taken the photo, the film is printed and needs to be taken out of the camera to develop, which in our experience took 1-2 minutes. As with any film, there are optimum conditions to get the best photo. Fujifilm recommends 25°C at the best temperature for taking photos, however you must ensure to keep the film out of bright light and extreme weather conditions, as they will affect the quality of the photo.

The images themselves have quite a vintage feel to them, with muted colours. As with most instant cameras, the Instax Mini 9 performed best in bright daylight outside. This is where the features were the most clear and popped on the paper. However, if you took it anywhere a little more dim, then the image quality did appear to become much darker. 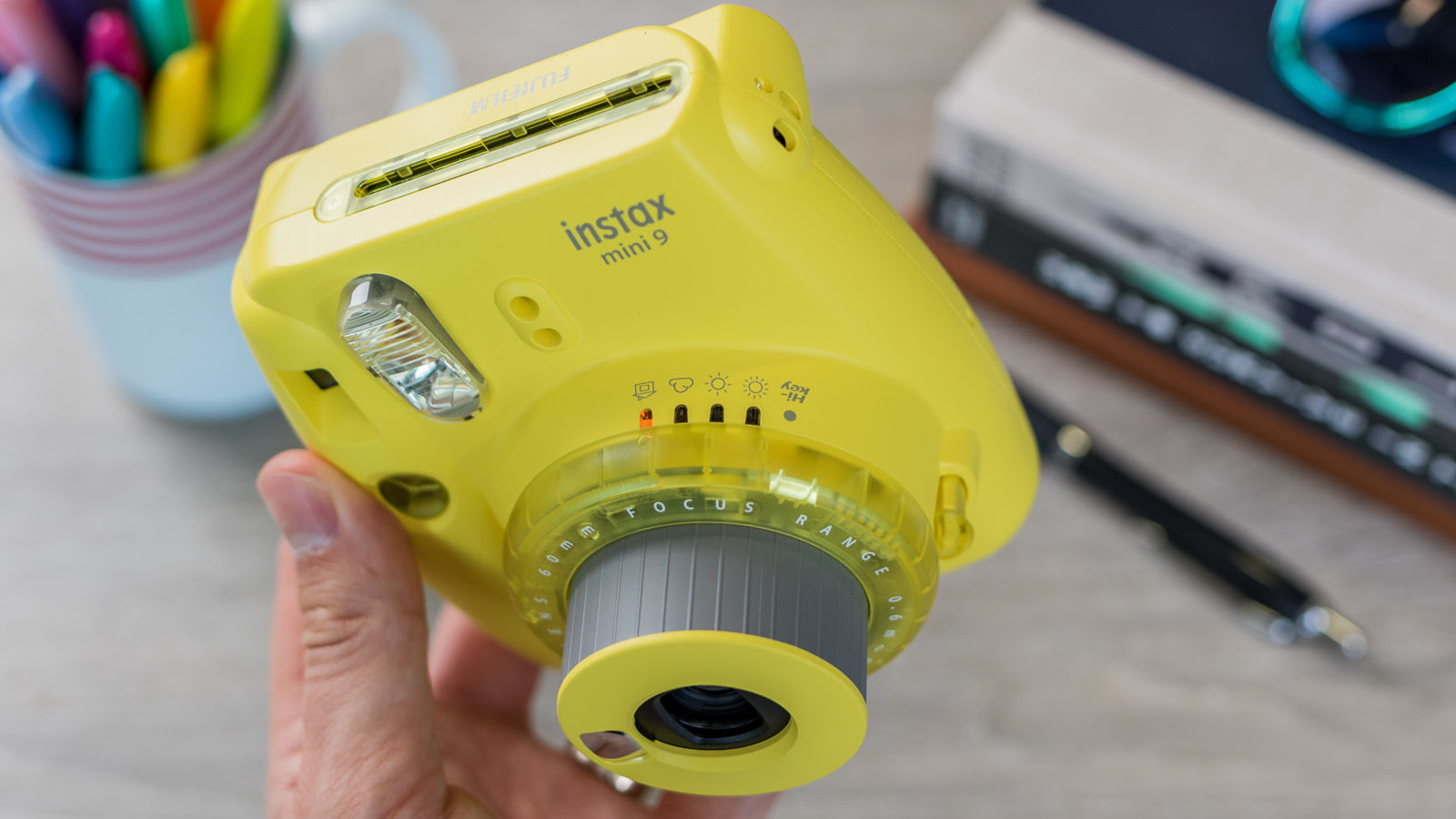 One of the most marketed features of the camera is the brightness indicator. This is Instax’s way of detecting the lighting conditions around you, allowing you to choose from one of four settings (three outdoor modes varying in weather, plus one for indoors) to adjust the camera to its surroundings and give you the best quality photo that in can… in theory.

Our biggest issue with this feature was that it couldn’t always seem to make up its mind on what setting it should be on, especially in cloudy weather and indoors with artificial lighting. The indicator would flick between the different suggested settings very rapidly at the slightest movement. As that’s on the front of the camera, I often wasn’t able to see if it was on the right setting when I actually went to shoot.

Consequently, some photos appeared quite dark – and it’s hard to tell if that was because of the setting I had the camera on, or if the camera just didn’t perform well in lower lighting. Either way, it made where I could use the Mini 9 a little limiting. However, most photos were at the very least visible, unlike some other instant cameras that we’ve tested in the past where the image has been completely spoiled.

The limited edition version that we tested also came with an extra bonus feature – colour filters. They require the same process of attachment that you get with the close-up lens and will give an extra element to experiment with if you’re someone who enjoys testing out different modes on the camera.

Though not all the images on this camera came out as bright as we would have hoped, it’s hard to complain about the quality when this camera comes in so much cheaper than most other instant cameras on the market. It’s designed to be used by someone who is a beginner, and is simply looking for a novelty product that provides instant film photos with an exterior that still looks modern and funky.

If you’re looking for something that offers more features and a slightly higher quality of image, then we would recommend looking at something like the Instax Mini 90, which offers a higher performance flash, or alternatively the Instax Square SQ6, which sits near the top of our best instant cameras list.

Otherwise, if you’re simply looking for an easy-to-use instant camera with no frills, and are happy to make compromises on the quality of the photos (or are happy to use it mainly in the bright daylight), then this is a great option.