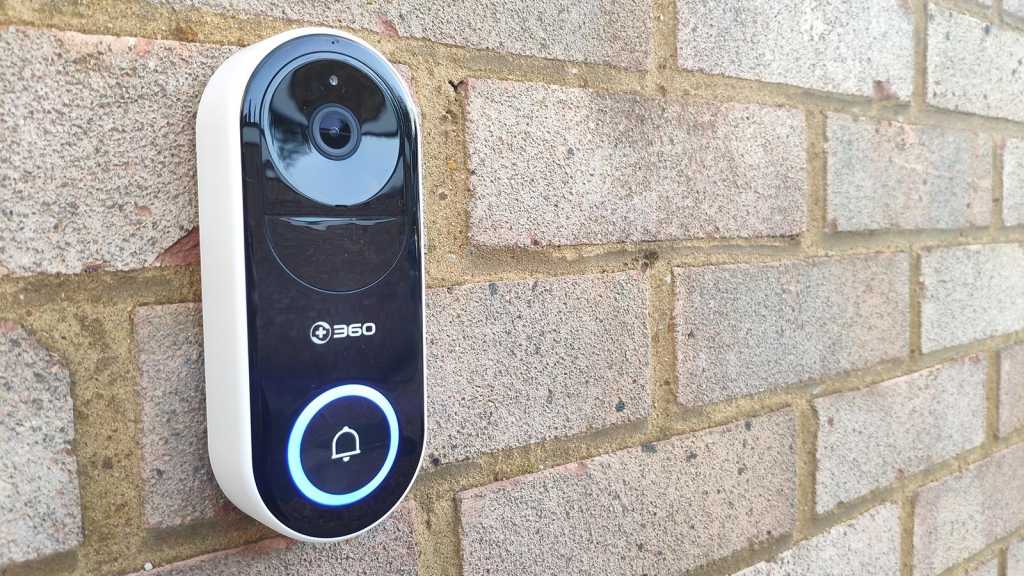 A cheap video doorbell with subscription-free storage and some great features, including the ability to mask your voice, night vision and face recognition. Installation is a breeze, but the 360 D819 is massively let down by the app, and we fear battery life may not be as good as is claimed.

Ring and Nest dominate the smart video doorbell market in the UK, and have become incredibly popular with consumers for their ability to ensure you never miss the postman again and in providing extra security for your home. But smart doorbells can be expensive, often requiring professional installation and an ongoing cloud storage subscription.

The 360 D819 is a Chinese video doorbell that caught our eye for its low retail price ( currently £74.97 from GearBest) and subscription-free cloud storage, thanks to the inclusion of a microSD slot and 48-hour free recording. It’s also incredibly easy to set up, due to its 5,000mAh battery and wireless connectivity.

Unlike some smart doorbells you will also find the indoor unit supplied in the box, which is handy for those times you don’t have your phone to hand and might otherwise miss a visitor. This is also where the microSD card is inserted, so on the off-chance someone manages to get around the tamper alarm and do away with your doorbell you will still have the video evidence.

Though you’ll need to recharge the doorbell over Micro-USB every once in a while (360 claims it will last up to six months, but this will depend on how frequently you have visitors), it’s otherwise intended to be a set-and-forget solution, and for tech novices that’s an appealing scenario.

We haven’t been testing the 360 long enough to accurately assess how its battery holds up, but after a day’s use the app is reporting that there is 91% juice in the tank, which doesn’t suggest to us that it would last a full six months. To be fair, in our testing we have been activating the doorbell many more times than we actually have visitors.

On paper the D819 looks to be on par with more familiar video doorbells with its motion detection, night vision, two-way audio, full-HD video feed and 162-degree wide-angle view, all of which is accessible via a free mobile app.

Something it adds to the mix, and that you won’t find elsewhere without a subscription, is 99% accurate face recognition – though we were disappointed to discover it can’t actually tell you who is at the door on the fly, only in the event log. You can, however, see a live preview of the video feed before answering a ring, plus a screengrab of any missed visitors is also shown in notifications.

So far, so good, then. Naturally we were excited to see how the 360 D819 fares under real-world testing.

The biggest hurdle in setup is simply that, in common with a lot of other smart home kit, the 360 D819 operates only on a 2GHz Wi-Fi network. We have a separate 2GHz Wi-Fi network configured for exactly this reason, so as soon as we had established that this was the problem and connected the doorbell to the appropriate network installation was painless.

A user guide is provided in the box to take you through the process, but in essence you need to install the 360 Smart Camera app from Google Play (or whichever app store you use) and register for a free account. You can then tap the + icon at the top right of the screen to begin setting up the doorbell.

You’ll pair the indoor unit before moving on to the doorbell itself. Do note that this has a two-pin plug, so you’ll need an adaptor for use in the UK. Plug this in, press and hold the SET button until you hear a beep, and allow any requested permissions. It will want to connect to your Wi-Fi network, so have the login details handy, and then it will pair with your phone via a sonic beep.

Once you’ve paired and named the indoor unit, connecting the doorbell itself takes seconds. Press and hold the power button on its rear, and it will ring when it is connected.

You can customise the ringtone, but the options are limited, and we found all began to grate over time. We are also concerned that it’s not quite loud enough to easily hear at all times – if you are in the garden or have music playing, for example – and this was at the maximum possible volume setting in the app.

You can now fix the doorbell to the outside of your home, but remember that it will need to be within range of your wireless network. Around 1.4m in height is about right, and there are fixings in the box to either screw it to a wall or stick it up using 3M tape.

We have to admit we used Blue Tack for testing purposes, though we really wouldn’t recommend this as a long-term solution – the device itself is IP67-rated, but Blue Tack isn’t going to fare very well in the great outdoors.

At the top of the doorbell you’ll notice a small pin hole, and this allows you to remove the doorbell for charging without setting off the tamper alarm. There is also a slider in the app that can prevent this alarm sounding.

Within the app you’ll find basic settings for motion alerts and notifications, but these are very limited. The 360 D819 doorbell can detect motion simply at 1m, 2m or 3m, but with none of the customisable motion zones you see with Ring, for example.

You can also instruct it to notify you only when people have been loitering outside the door for more than 15 seconds, rather than every time a cat creeps past – this can be a simple notification on your phone or an actual chime of the doorbell, with the latter most likely to leave you thinking someone’s playing Knock Down Ginger.

The app also lacks scheduling options, though you can activate Do Not Disturb when you are at home so notifications come through the doorbell only. Since this negates the point of a video doorbell – you can’t see who is there until you open the door – we’re not sure why you would want to do this.

While setup of the 360 doorbell was a breeze, in use it proved more problematic. Sometimes it would work flawlessly, but despite our strong network signal we found it routinely suffered from lag – which made answering and speaking to visitors difficult – and we very rarely managed to see a preview of who was at the door before answering it. As with the indoor unit, we also found the speaker a little too quiet, even at its maximum.

Worse, often notifications wouldn’t sound on our phone at all. The indoor unit would always chime, but this is useful only when you’re at home. You’ll need to give the app permission to autostart and deliver notifications on the lock screen and so forth, but even so it just doesn’t always want to work – particularly if there are several rings in quick succession, which you might think is because it hasn’t finished recording, though the clips themselves are pretty short – usually around 10 seconds.

Though the video is clear and well-lit, one of the problems with not hardwiring the doorbell and subscribing to a proper cloud storage service is that it isn’t able to record at all times, only when it detects motion or a bell ring. This means video will very often miss the important event immediately before or after a recording, such as where the postman actually leaves your parcel when you’re not in.

As we mentioned earlier there is face recognition, but it’s a real shame that this isn’t able to work fast enough to tell you who is at the door, since it names them only in the event log.

In common with other smart doorbells the app has a live view for the camera, which is probably the part we found the most handy. Two-way audio is possible in this mode, and you can also take screenshots and record the feed,

So while for the most part we found the app a bit buggy, and the one thing that lets down the 360 smart doorbell, it does have one extra feature that we think is a brilliant idea – the ability to mask your voice on the fly. You have a choice of ‘big uncle’ (who sounds more like a grandfather to us) and ‘funny mode’, and though they seem a bit gimmicky and Home Alone-esque, we can completely see how they might give comfort to someone who is home alone and feeling vulnerable.

On paper the 360 doorbell looks to offer fantastic value for money and some great features, but in use we found the app a little clunky and laggy, and too sparse in terms of customisation options.