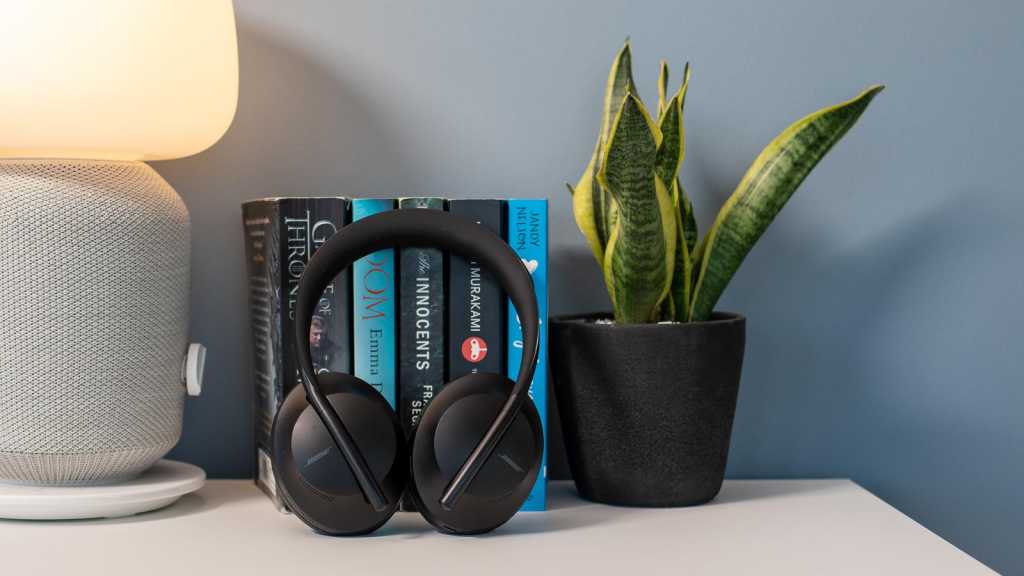 The Bose Headphones 700 don’t quite do enough to claim the noise cancelling crown. The sound quality is phenomenal – up their with Sony’s best – but a price hike combined with an awkward app and some intermittent Bluetooth issues make these over-ear headphones merely good, rather than great.

The last few years have seen a back-and-forth squabble for the noise-cancelling headphone crown. Sony has mostly held onto the title when it comes to blocking out external noise, while Bose has arguably trumped on music playback quality.

The company clearly isn’t happy sharing the spotlight though, and the Noise Cancelling Headphones 700 are its attempt to settle things once and for all – well, until the next pair of Sonys come out, that is.

I’ve been using the Headphones 700 for the last few weeks, and while I’m not quite convinced that Bose is the knock-out winner, these certainly make the Sonys fight until the final bell.

The Noise Cancelling Headphones 700 are available right now from Bose, Amazon, John Lewis, and most of the usual other retailers. Available in either black or silver, they’ll set you back £349.95/$399.95. – though they’ve dropped to just £299 in the UK at the time of writing.

That’s a small step up from the £329/$349 QuietComfort 35 II headphones – Bose’s previous flagship noise-cancelling cans – though you can now find the QC35 II for less than that usually – right now they’re £229 on UK Amazon, for example.

It’s also more than the flagship Sony WH-1000XM3 headphones, which are still significantly discounted at £229/ $278, which is a tougher pill to swallow. The Sonys are also routinely available for less than that asking price, and offer serious competition to Bose – I suspect most people will find that the Headphones 700 don’t do quite enough different to justify paying the premium over Sony’s best.

Check out our guide to the best headphones to see how they stack up against the rest of the competition. We also have a dedicated round-up for the  best noise cancelling headphones. 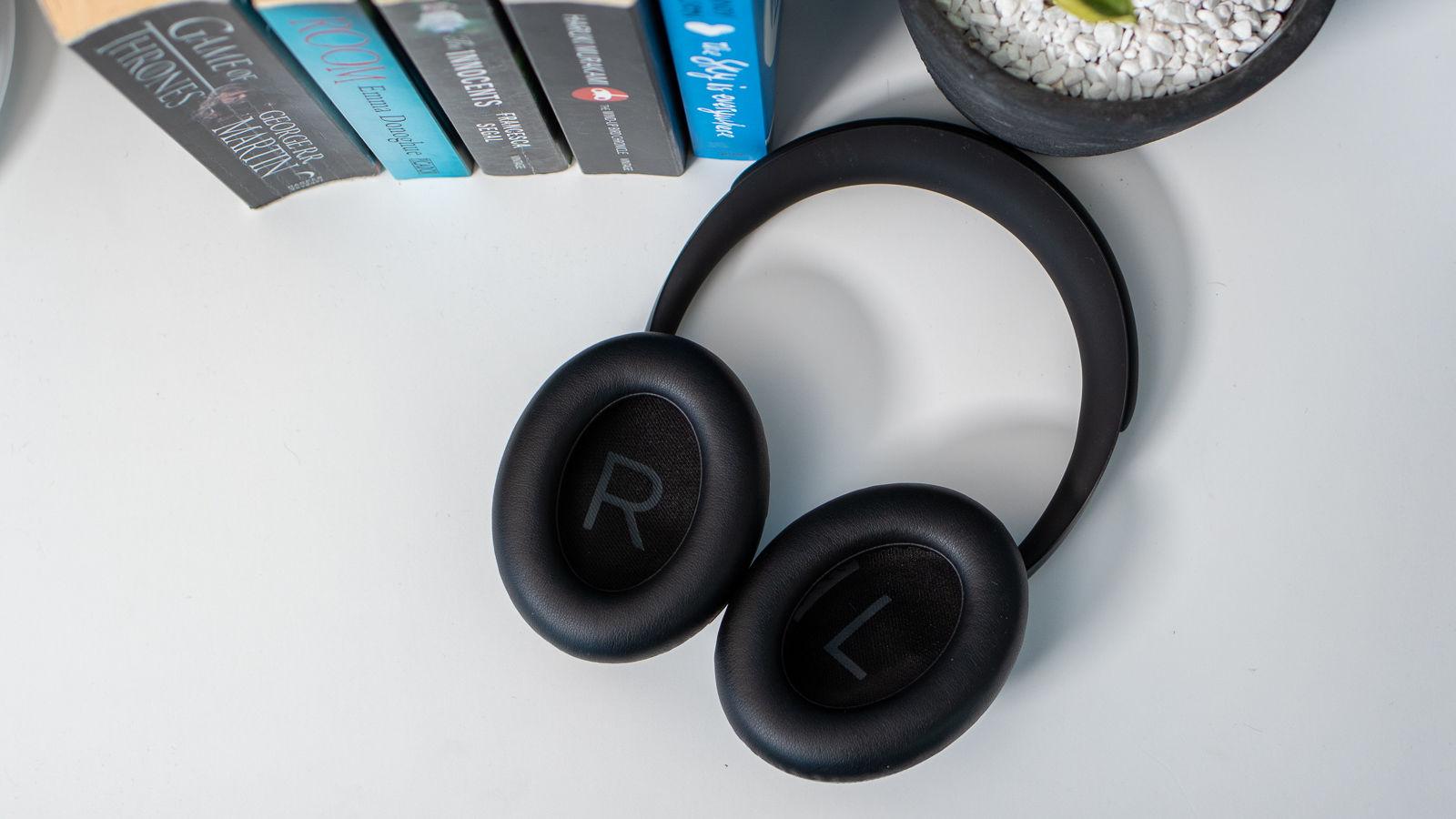 Let’s cut right to the chase: how do these things sound?

First up, the noise-cancelling. Bose has packed in eight separate microphones (four on each cup), and six of them are designed to listen to the outside world so that the speakers can drown it out by playing cancelling frequencies.

No noise cancelling is perfect (yet) and you will still hear something through the effect, even on its highest setting, but this does a very good job of deadening most of it. As with any noise cancellation, it’s best at repetitive low-level noises – train tracks, or keyboards clattering in an office – and not so effective at filtering out sudden noises or loud conversation.

Perhaps most importantly, the noise cancellation here is now just as good as what Sony can manage. Comparing side by side to my WH-1000XM2 headphones – admittedly, the previous Sony model – it’s almost impossible to pull the two apart, with the Bose perhaps taking a slight edge. Since the latest Sony model offered only slight improvement, it would probably be fair to say that at this point they’re neck-and-neck. 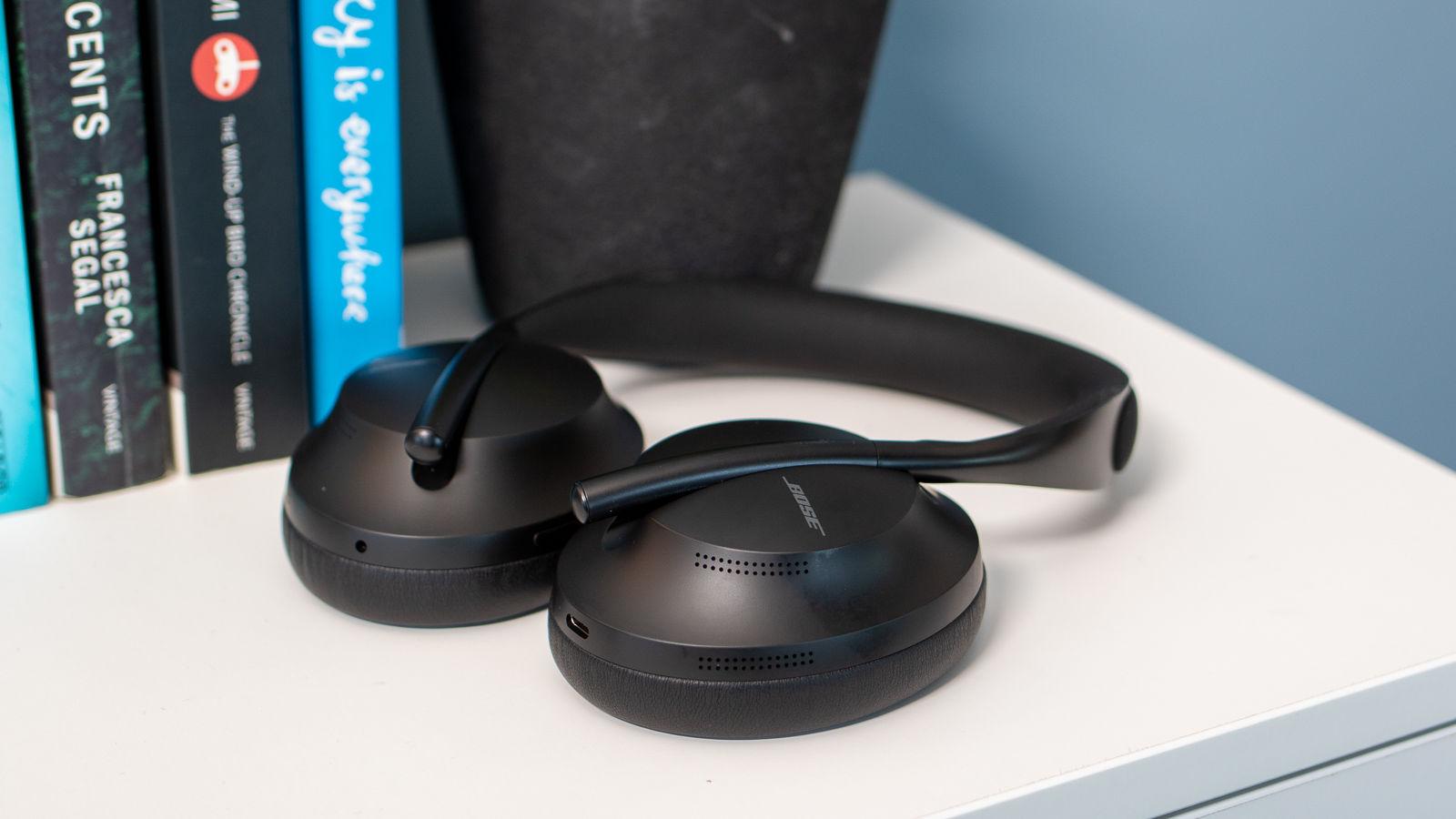 It’s a similar story on the playback quality. Deep, rich bass underlies the experience, but there’s clarity throughout the audio spectrum. Bright mids and trebles pop right out, and there’s no murkiness or muddiness in the mix at all. A fairly balanced sound profile also means that just about any genre will sound its best, though for the time being there’s no way to adjust the EQ on the fly.

One area that the Headphones 700 definitely pull ahead of even the latest Sonys is noise-cancelling for your own voice. That’s where those other two microphones of the eight come in – they, along with another two that pull double duty, are designed to locate and isolate the sound of your voice while you’re on a call, then cancel out other background sounds.

That means that while you’re on a video or voice call you’ll sound louder and clearer, even against a noisy background. That’s great for calls while you’re walking along a busy road, or while working in the clatter of a café – the algorithm does an impressive job of reducing background chatter, music, or any of the other noises that pop up in a restaurant environment without compromising on the quality of the vocal audio.

The intricacies of the noise cancellation are all controlled through the Bose Music app – a new piece of software that’s distinct from – but admittedly similar to – previous Bose apps.

You can save up to three noise cancellation levels as favourites – with the defaults at 0, 5, and 10 – in addition to customising how much of your own voice you hear on a call, tweaking voice assistant settings (between Google Assistant, Alexa, or whatever your phone uses), and control a couple of the on-device controls.

The downside of the app is that setup is fiddly and even once it’s going, I found it occasionally unreliable. I simply couldn’t get the app to pair with the headphones from my OnePlus 7 Pro – even though they had connected over Bluetooth and were happily playing music – and eventually had to switch to a Samsung Galaxy phone in order to get things set up and running properly. Even then, every now and then the app would simply refuse to recognise the headphones while they were still connected over Bluetooth.

For those who care, Bose still also hasn’t adopted AptX support – on the basis that iPhones don’t support it anyway – instead sticking with AAC and SBC. There has been an update to Bluetooth 5.0 at least, but I actually found I suffered from short bouts of crackling and stuttering audio more often than I’d expect – especially when connected to two devices at once, even if one wasn’t producing any audio. 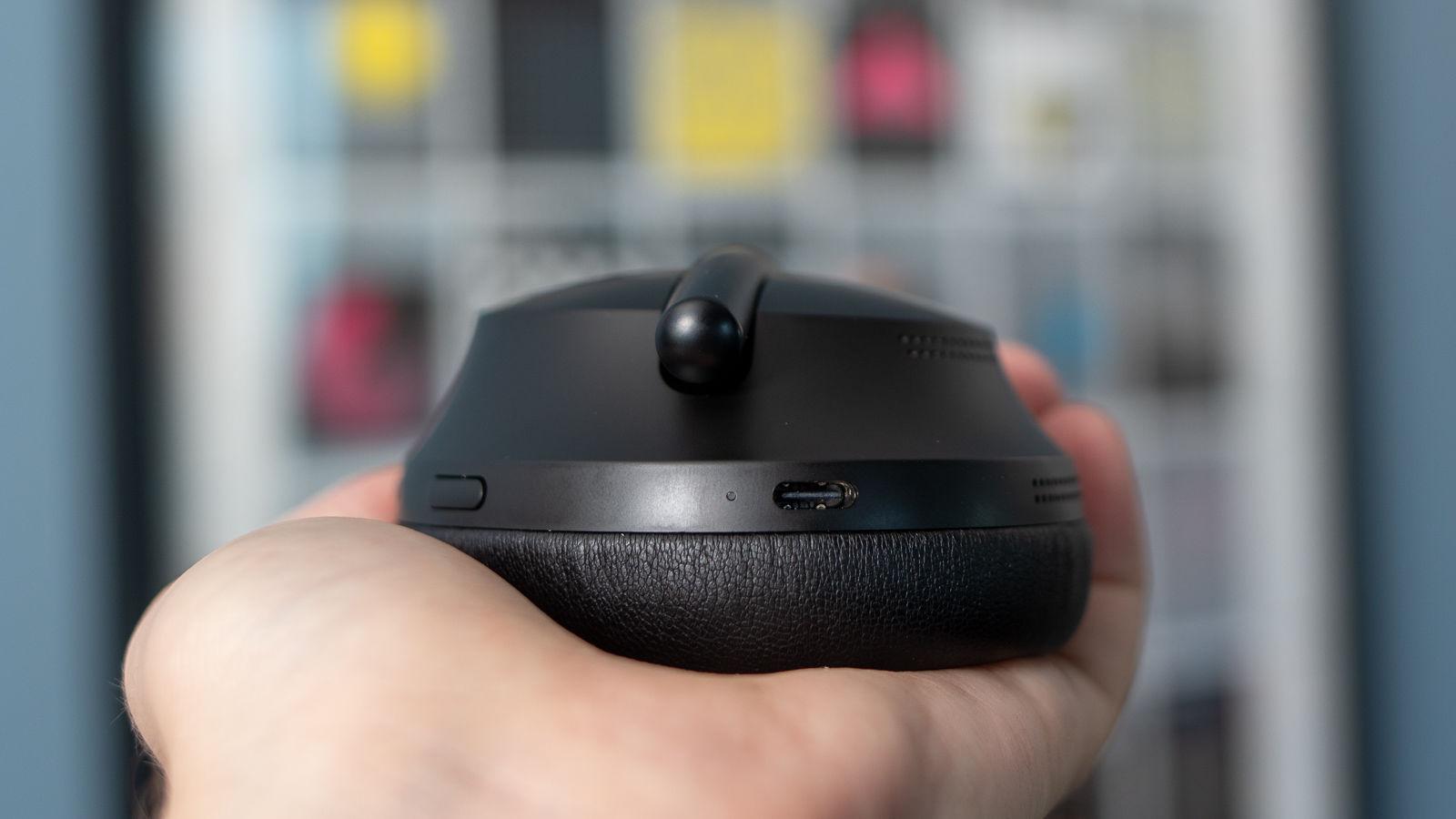 If the app is a bit up and down, there’s at least one area where Bose has leapfrogged Sony: aesthetics. While the QC35 II headphones looked fairly utilitarian, the Headphones 700 have a sleek, futuristic curve to them that’s almost certain to win prospective customers over.

The headband curves round in an unbroken arc of squidgy silicone, topped by tougher plastic, while the earcups themselves are subtly asymmetric. It’s a design that makes previous Bose and Sony headsets feel bulky by comparison – even though the sizing is similar.

There are just three physical buttons, all on the back side. The left cup has a button to cycle through your pre-set noise cancellation favourites, while the right has a voice assistant trigger and the power/pairing button.

Other controls – play, pause, volume, or skipping tracks – are handled through a tough-sensitive area on the front of the right cup. It’s more responsive than the equivalent Sony controls, but tapping the correct area first time is harder than it sounds. Even after a couple weeks, I routinely catch the headband or the edge of the cup and have to adjust my aim – though my mediocre spatial awareness might be to blame there. 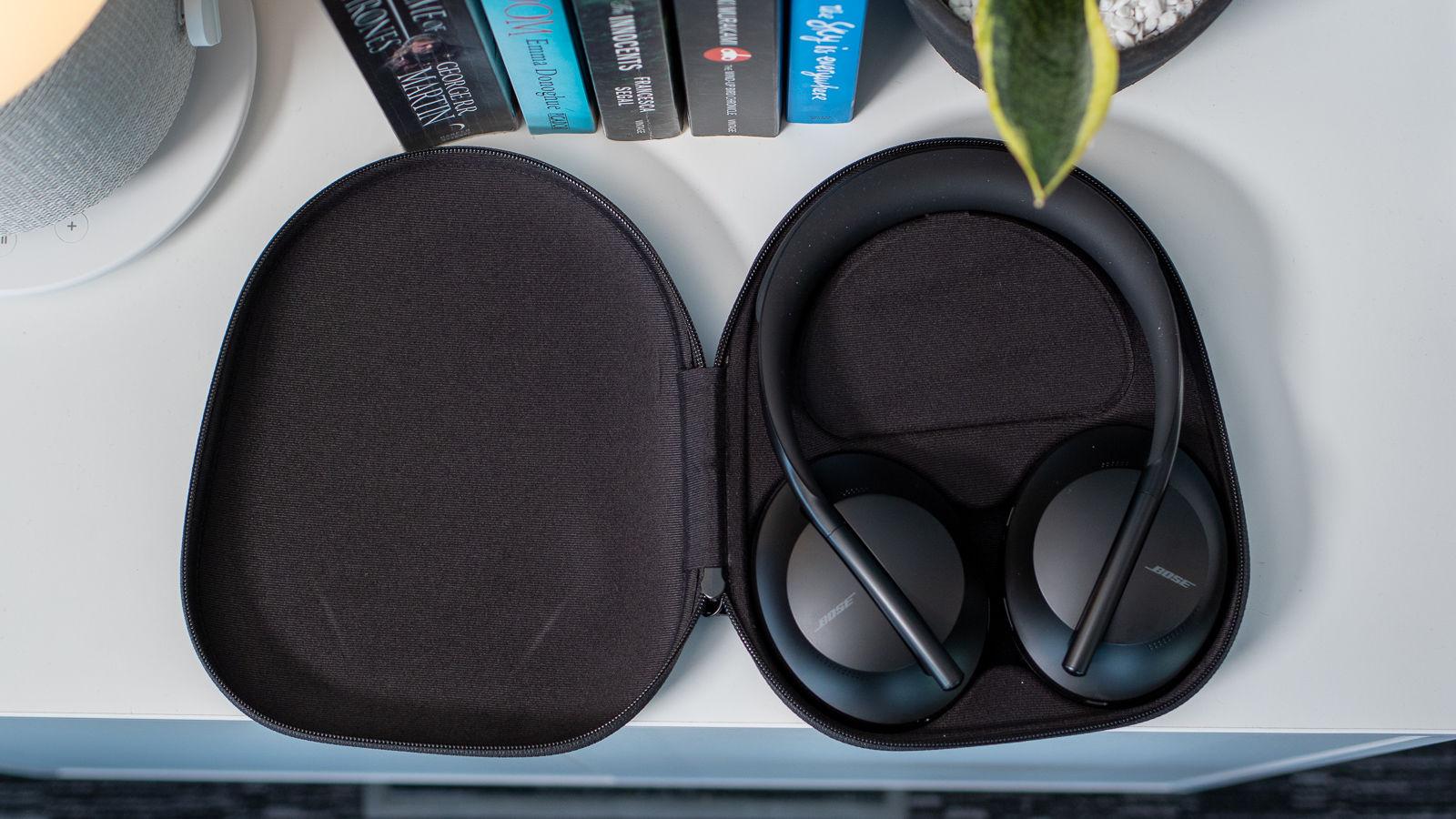 Unlike previous models these don’t fold down at all, so there’s no way to cram them into a coat pocket. They do still come with a carry case though, which is taller but slimmer than before, thanks to a tapered design. It also features a handy magnetic pouch for the USB-C charging cable and 3.5mm-2.5mm audio cable. There’s no airplane adapter included, but it’s rare that you need one these days anyway.

Speaking of charging, Bose promises 20 hours of battery life and the headphones do deliver something around there. Even more helpfully, battery life is described – both in the app and in your ears when you switch the headset on – in terms of remaining hours and minutes, not an abstract percentage.

The Noise Cancelling Headphones 700 are almost perfect – but the few irritations that are there, combined with a price jump relative to the competition – stop them from being a clear-cut winner in the noise-cancelling arms race.

Unfortunately, the unreliable app, glitchy Bluetooth, and fiddly touch controls detract from the experience. When you can leave the headphones be and just listen, they’re mostly phenomenal, but every time you have to step in to interact with them the little irritations creep in.

At the same price as the Sony rivals these would probably still be the more compelling offering, but it’s harder to justify the price premium unless you’re a particular fan of the aesthetics.