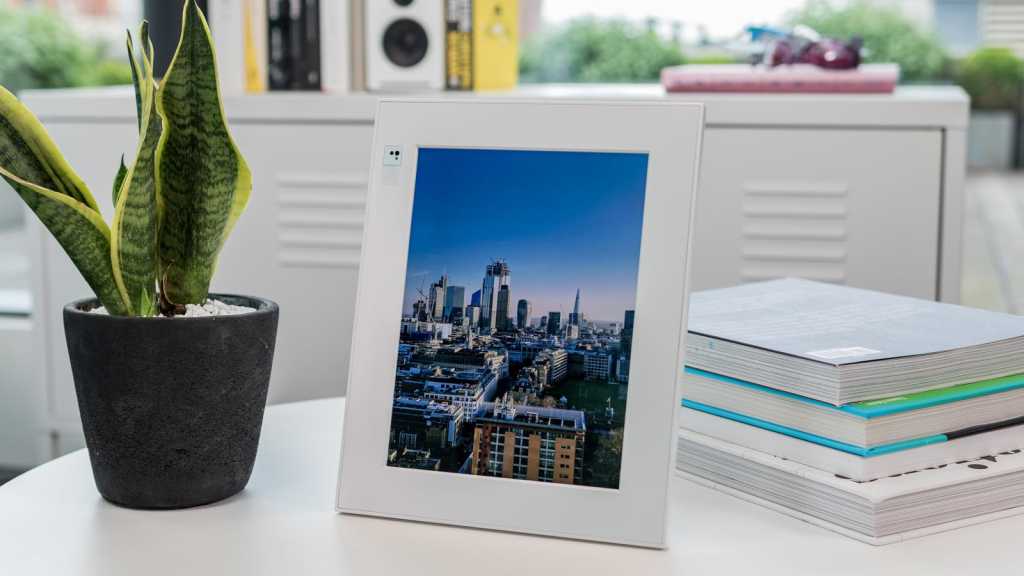 As digital photo frames go, Aura is one of the most attractive on the market, with a sleek design and high resolution. The cloud storage and app controlled software will also be a positive for many users. However, the premium features do make the product have a heftier price than its competitors, and it still comes with a few gripes.

Even though home hubs’ popularity is on the rise, digital photo frames are still in demand when it comes to showing off your photos at home. However, in the past some models haven’t blended seamlessly with the environment and have looked clunky. This isn’t an issue with the Aura frame. Having used one for the past week at home, I’m happy to see it sitting on my bedside table.

With some of the best specs on the market, it perfectly displays some of the highest definition photos, and therefore works perfectly in tandem with anyone who has a smartphone with a very good quality camera. I personally used photos taken on my Google Pixel 3, and they’ve showed up beautifully.

This photo frame relies on cloud storage, connecting directly with your phone via the Aura app, which other people can connect to (and therefore send photos to). However, there isn’t a manual button or remote included with the frame – everything is controlled through the app. For some this may be a blessing, but in an ideal situation, a frame would offer both options to suit everyone.

The Aura currently comes in two different options – the Modern design which is currently priced as $299, and the limited edition Wood model which is priced at $399. Other than the exterior finish, there aren’t any other differences between the two products.

The Aura frame is at the top end of digital photo frame pricing, approximately £50/$100 dearer than the most similar product, the Nixplay Iris Wi-Fi Photo Frame. Also note that the Aura frame is only available in the USA at the moment, and their site does not appear to offer international shipping. You’ll have to check over on sites such as Amazon US if you’re based outside of America. Otherwise you can find the Aura at department stores such as Best Buy or Nordstrom.

It’s also worth noting that for the same price or less, you could pick up an integrated hub that offers more than just a photo frame. So if you’re considering an Alexa or Google Home but with photo support, then something like the Google Nest Hub may be better suited for you. Check out our full list of best smart displays for more on these types of devices. Or, if you want to see more options then check out our guide to the best digital frames on the market right now.

The Aura photo frame wouldn’t look out of place in a high-end homeware store. It’s minimalistic, not bulky and can easily be altered into either portrait or landscape modes with the included rotating stand, depending on what photos you want on show. The stand fits neatly over the power cable, a clever design move that gives a clean finish to the back of the frame.

Photos that you add into your frame are also automatically cropped/resized to fit in the frame in the most aesthetically pleasing way. If the frame detects that a photo is too low resolution, or the wrong orientation for how you have your frame set up, then it will let you know.

It also comes in three metallic colour finishes. We tested out the Stardust colour – a shimmery white – but you can also get the product in Slate and Stone, two darker colours. Each looks sophisticated and glossy. If you’re looking for a wood finish, you can have the Walnut design, a dark wood with earthy tones. However, that will set you back an extra $100.

The frame does need to be plugged in at all times, something to keep in mind when choosing where you want it to sit in your home. But on the plus side, that does mean you don’t need to ever worry about the battery life.

Though some digital frames support the use of videos, Aura does not. However, we imagine that this is a feature that won’t be a high priority for many digital frame users.

This is something that’s easy to see when using the frame. Photos look great from all angles – even side on. They don’t become pixelated, nor do the colours warp. Even though the Aura costs a little more than the competition, it may be worth investing the extra money in getting a great display.

The frame has some nifty features that help it adjust to its surroundings. The motion detector allows you to swipe between photos. The frame is also compatible with both Alexa and Google Assistant, so you can use this function to switch between photos, ask for a photo’s date/location, and add photos to your frame from a specific time/place if you have the location switched on in your phone.

There’s an automatic brightness adjustment, so the frame wakes itself up first thing in the morning, but will go to sleep at night to conserve energy. If you prefer, you can also set your own timings for the frame to turn on and off during the day in the official Aura app – more on that later.

The frame does require to be connected to Wi-Fi to allow new photos to be added to the frame and accept software updates. However, from personal use this was at times a little limiting. Firstly, a little message popped up at the bottom of the frame telling me any time the frame was offline, even though it was still displaying a photo. Personally I would prefer another method to inform me that doesn’t impact on the image.

The frame can also get a little glitchy if you disconnect from the internet, showing a stock image until the frame is back online. I think that these niggles could be solved if the frame saved photos to the device and was able to operate offline – as sometimes we can’t always guarantee that Wi-Fi will be working correctly all the time. Even just a manual button or remote to operate the frame would make the product a little more flexible for users who prefer something a little more hands-on.

Whilst Aura isn’t the only company looking at Wi-Fi based photo frames (as opposed to loading them with a USB or SD card), they are the first to bring all their user interface into a smartphone app. You use the app to set up the frame, add in your photos, choose your favourite slideshow settings, add on timers… more or less everything really. The interface is very simple and easy to use.

One of the most nifty features of the app is that you’re able to invite friends and family to add their own photos to your frame. So no matter where they are, you can recieve a brand new photo to have in your household. No more posting those holiday photos to your mum!

The app was occasionally laggy at times when choosing what Wi-Fi connection to use, and did not always automatically detect which connections were available. But once a stable connection was established, it was quick to respond with the frame, and photos were added and changed nearly instantly.

One downside is that the app only integrates with your phone’s library and Google Photos. If there was a way to connect your social accounts like Instagram, then that would just be another way of finding your best photos, as opposed to trawling back through your camera albums. These limited modes may also be a downside for iPhone users, as photos on iCloud aren’t currently supported.

The app does however include a section called ‘Smart Albums’, which automatically detects people’s faces and sorts them into their own album. This is particularly great if you have a pet and would like a whole slideshow dedicated to them (and let’s be honest, who wouldn’t?).

Best of all, the app uses cloud storage, which means that you can add on an unlimited amount of photos to your frame, mitigating the need for millions of frames cluttering your wall. This is a huge plus on some competitors that only allow for a certain amount of images.

All in all it’s mostly positive when it comes to the Aura photo frame. It stands head and shoulders above its competition when it comes to design, staying classic and minimalist. The unlimited cloud storage and photo sharing allows for a great deal of creativity, and the little extra features such as the motion detector and automatic brightness adjustment add flair to the product. Not forgetting of course the high resolution of the screen itself, the most important part of any photo frame, period.

However, this is a premium product, and will set you back a few pennies in comparison to some of its competitors. Having all the controls in the app may also not be to everyone’s tastes, especially those who prefer interacting directly with the physical product. As we’re also in the age of social media, perhaps the app should look to include more ways to access photos other than through the phone’s hard drive and Google Photos.

Overall, if you’re happy to invest some money into having a high quality frame, and can overlook the few setbacks that we’ve highlighted, then we’d definitely recommend the Aura as a great option for your next digital frame.