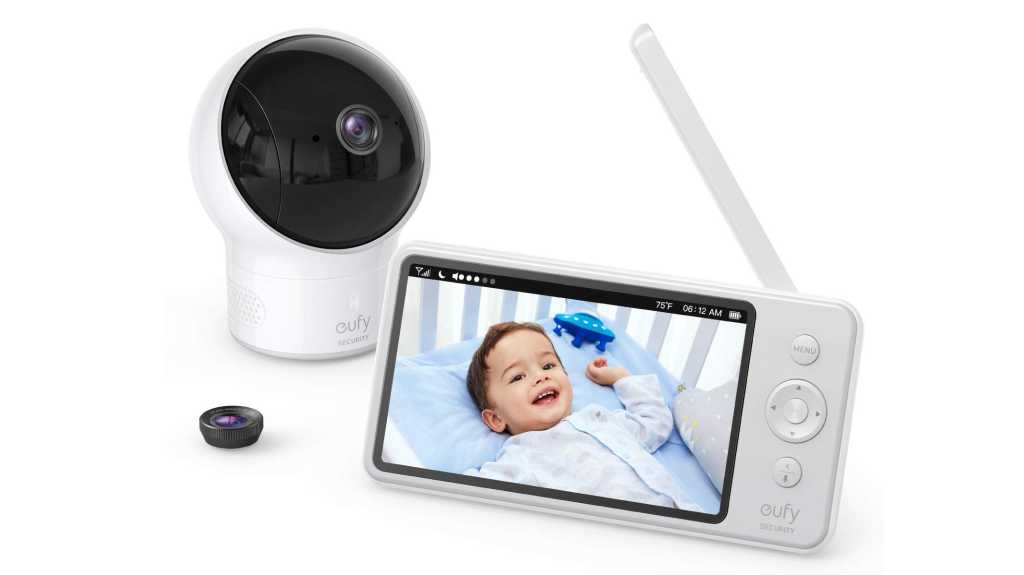 We were immediately impressed by the Eufy SpaceView Baby Monitor, from its neat packaging and modern, simple design right through to its ease-of-use and the quality of the image. It’s one of the more expensive monitors we’ve seen, but if you’re willing to cough up the cash it certainly looks and feels like a premium option, albeit one without WiFi connectivity.

As a new parent, you’re probably spending countless hours researching all of the best gadgets and gizmos to help keep your baby safe and happy. One of those gadgets is a baby monitor, to help you keep an eye (and/or ear) on your sleeping baby whilst you’re not in the room. We put the Eufy SpaceView Baby Monitor to the test to find out how it compares with other baby monitors, and whether or not it’s worth buying.

Take a look at our round-up of the best baby monitors for more buying advice.

The price of the Eufy SpaceView Baby Monitor is likely to be the sticking point for most parents. At £159.99/$159.99 there are cheaper options available that offer similar (and in some cases additional) features, though Eufy does take some of those features to the next level to make that price feel worthwhile.

It’s available to buy from Eufy’s own website, or from Amazon.

We really like the design of this baby monitor. The display module has a simple white colour scheme that’ll suit any style, with small bezels surrounding the screen. There’s a kickstand on the rear and an adjustable antenna that can be neatly tucked away if you don’t need it. It feels sturdy and durable.

The camera module has a modern, spherical white and black design with a small base suitable for popping onto a window ledge, chest of drawers or other flat surface. There’s also a mount included with suitable screws and wall plugs that’ll mean you can mount the camera onto any suitable corner of the room, even if you don’t have a surface available.

The camera needs to be plugged in at all times, but comes with a long, 3 metre USB cable that should make it easy to place the camera anywhere in the room, while the monitor has a rechargeable battery built-in, charged via micro-USB. All cables and plugs for charging are included.

Set-up of the Eufy SpaceView is as easy as it can get. Just charge the display module (Eufy suggests a full charge before first use), plug in the camera and turn them both on. You’ll be asked to select the time, but after that it’ll take mere seconds for an image to appear on screen.

The display itself is 5in diagonally, which is brilliantly large and can be viewed even at a distance. It offers a 720p resolution, which is better than other baby monitors we’ve reviewed. Colour is reasonable and the brightness is adjustable using on-screen controls. There are two zoom options, 1.5x and 2x, which might be handy but we found did reduce the quality of the image quite significantly.

There’s a night vision mode that worked well during our testing, but there’s no nightlight as offered by some rival monitors. It also misses out on motion detection, but does have a sound detection feature instead, which will alert you with an alarm when the ambient noise in the room goes above the level you’ve set.

One of the most impressive features of this camera is the ability to pan the lens 330 degrees left or right, and 110 degrees up and down. Most of the time you’re not going to need to move the camera when your baby is small, but as he or she grows and learns to move, you’ll like the ability to simply press the arrow buttons on the display module to track exactly where your baby is. You might even want to move it to check whether you closed the window or the curtains without having to disturb your sleeping child.

Plus, there’s a second lens included that makes the view much wider, which may suit your room better than the default lens attached to the camera and will offer flexibility and future-proofing should you decide to move rooms or even houses. 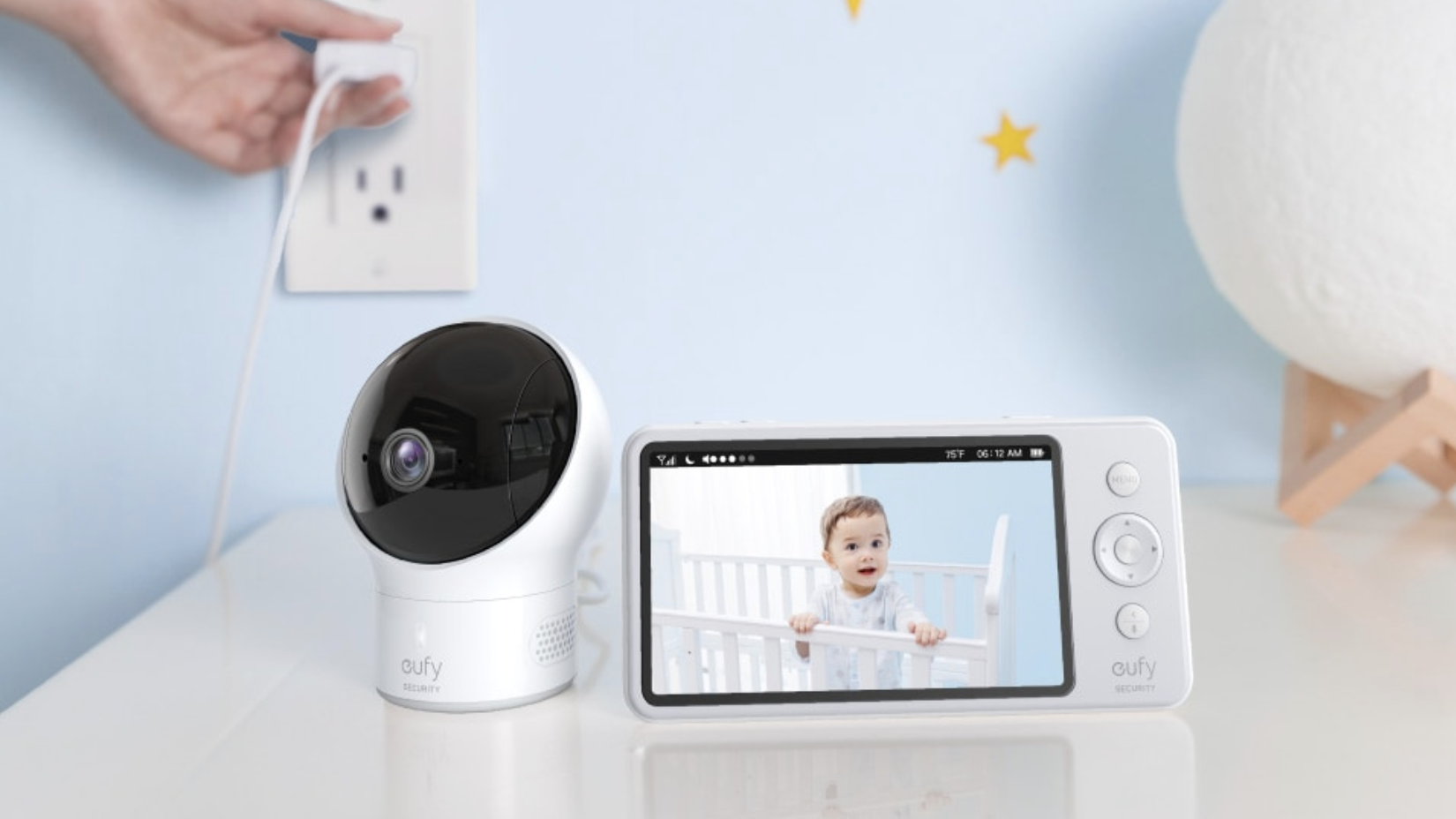 There’s almost no lag, both when moving the camera but also with the picture itself. We found that noises and movement came through the display module almost immediately, which hasn’t been the case with some other monitors we’ve tried.

Pressing the microphone button on the display module lets you speak to your baby should you want to sooth them back to sleep without entering the room, or let them know that you’re on your way.

The Eufy SpaceView also offers the ability to play lullabies via the camera module to help your child fall asleep. We didn’t have high hopes for these, because others we’ve tried have been incredibly robotic and tinny. These, however, aren’t too bad! They’re not perfect, and every child is different so some may like them and others won’t, but the quality is actually quite good and there’s the option to cycle through the five lullabies or select just the one to repeat. The lullaby will automatically turn off after 30 minutes.

It has a thermostat built in to help you determine whether it’s too hot or cold in your baby’s room, too. The temperature is displayed on screen at all times, along with the time, a battery indicator and signal strength.

Battery life is impressive, at up to seven hours with the display on, or 17 hours in power-saving mode. You can choose to have the display stay on, turn off after one minute, after three minutes or after five. You can wake it again at any time just by pressing a button on the display module. During our testing, we found that battery life to be plenty, and just made sure to keep the display plugged in when we didn’t need to carry it around with us to ensure it didn’t run out of charge.

Signal strength is also great. We had no trouble with it whatsoever in our two storey property, even when in the garden.

What the Eufy SpaceView misses out on is WiFi connectivity, which is used in other monitors such as the BT Smart Baby Monitor to allow connection to a mobile app that can act as a second display, offer a better signal strength and introduce some additional features to the monitor. It is also used to connect to smart assistants such as Google Home and Amazon Alexa, although we found the smart features to be quite gimmicky rather than useful during our testing.

The benefit of having no WiFi connectivity is that it’s easy to travel with and arguably safer, as it’s more tricky to hack into. But for some not having the ability to access the camera feed on their phone will be a dealbreaker.

Weirdly, there is a microSD card slot in the side of this monitor that is currently not in use. Eufy says it is “reserved for future development and feature updates,” which I imagine will mean the ability to record video. How much use that is for a baby monitor we’re not so sure, but it’s interesting to know that Eufy isn’t quite finished yet with features for this one.

There is the option to add additional cameras to your setup should you have more than one child or want to monitor additional rooms, although this seems to be limited to US availability for now (we couldn’t find the extra camera available to buy anywhere in the UK).

The Eufy SpaceView Baby Monitor has a lot going for it. It’s easy-to-use, great quality and will last right into your child’s older years. The lack of WiFi will immediately put some parents off, but if you’re not worried about having to carry around the display module and not being able to record video clips, you shouldn’t find this to be a problem. In fact, it’s more convenient if you plan to use it when travelling and want to avoid complicated set-up processes.

It is among the more expensive monitors on the market, but it does offer quality, flexibility and future-proofing that many parents will love.