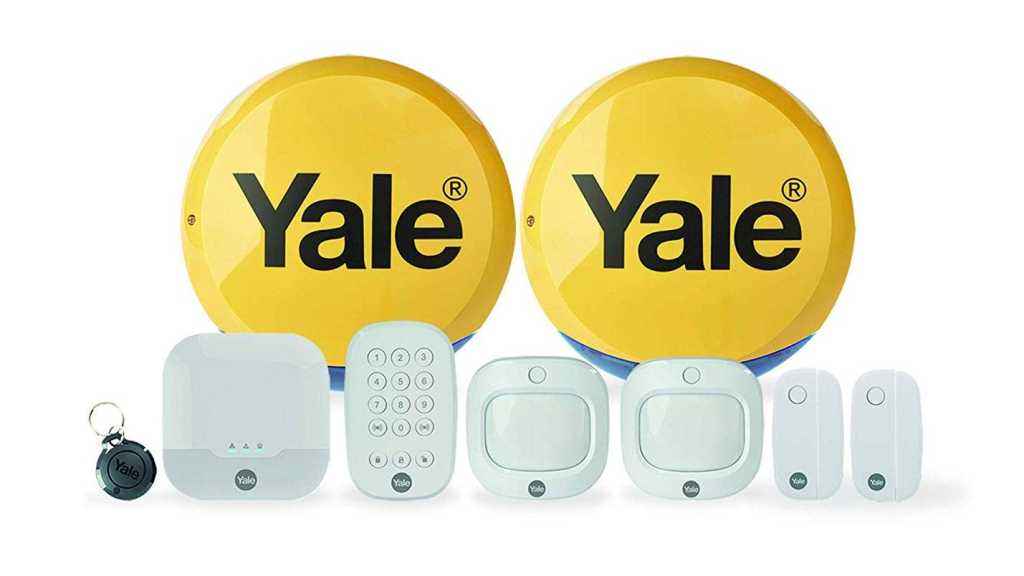 The app and alerts aren’t as user friendly as we’d like, but the Sync system works well and is exactly what most people want from a smart home alarm.

Yale offers lots of alarm systems, but this is its smartest. It’s designed for people who don’t want to pay a monthly fee for a managed system, such as Simplisafe, and instead are happy to get alerts on their phone to tell them when the alarm has been triggered.

If you’re wondering what the difference is between a smart and non-smart alarm, that’s basically it: notifications on your phone so you know what’s happening even if you’re not at home. Plus, the app gives you full control over arming and disarming as well as configuring and renaming devices so you don’t have to do it all via a fiddly keypad.

We’ve reviewed the Family Pack Plus, the IA-330, which costs £349.99 but there are other kits that might suit you better.

The Sync Family Pack includes fewer components bust costs £246.99 from Amazon. It isn’t available in the US at all, and in Europe you’ll find various other kits starting at around 250 €.

As you’d imagine, it’s expandable so you can buy the accessories you want later on, including key fobs, extra motion or door/window sensors (plus pet-friendly models), panic buttons and smoke alarms. There’s also a smart plug if you want to be able to control lights or other devices from the Yale Home app.

The Yale Home app works with Yale’s Conexis Smart Door Lock, but that isn’t part of the Sync alarm system, and nor is there a camera, though again Yale does sell the Homeview Wifi camera, which works with the separate Homeview app. Since you have to run a separate app, you may as well buy a camera from our roundup of the best security cameras.

The Family Pack Plus comes with the central component – the Sync Hub – plus an outdoor siren, a dummy siren (ideal for larger homes, or those with multiple entry points), two PIR motion detectors – not the pet-friendly ones – a key pad, a key fob and two door / window contacts.

Where you might be used to an alarm’s keypad including an internal siren, that’s within the Sync Hub, so all sounds including chimes and arming / disarming beeps come from the hub.

You’ll probably be somewhat limited as to where you can place the hub since it must be connected to your router via an Ethernet cable, and that also means you need a spare port on your router. In our case, that meant putting it the living room, which turned out to be quite annoying if you enable the chimes which go off when someone triggers a sensor when the alarm isn’t armed. 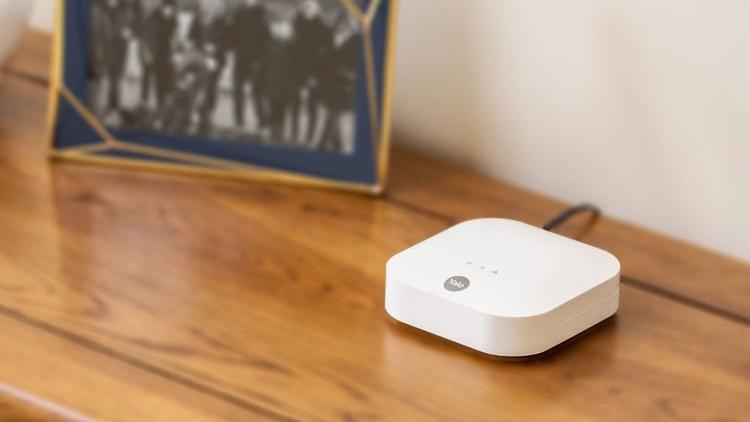 That’s where other systems which have embedded SIMs could earn their keep, but since we don’t tend to suffer frequent power cuts in the UK, it’s not really an issue.

Everything comes pre-paired so installation is pretty easy. However, the instructions which come with the kit could be a lot better. There’s barely any text, and the images aren’t particularly helpful. We’d like to see Yale revamp it so the process is a lot clearer, including how to test and verify you’ve installed everything correctly, and that all the sensors are working properly.

Most sensors will need to be attached to your walls, doors or windows with screws (provided) but there is the option to use sticky pads if you don’t want to – or can’t – drill holes. We found the door/window contacts worked fine on UPVC doors with bevelled edges: they can tolerate being placed at a 45° to each other and with a 10mm gap as well.

The external siren is undoubtedly the trickiest component to install, and if you’re uncomfortable climbing ladders and drilling holes in your walls, you might end up having to pay £200-300 for a professional to install the whole system. 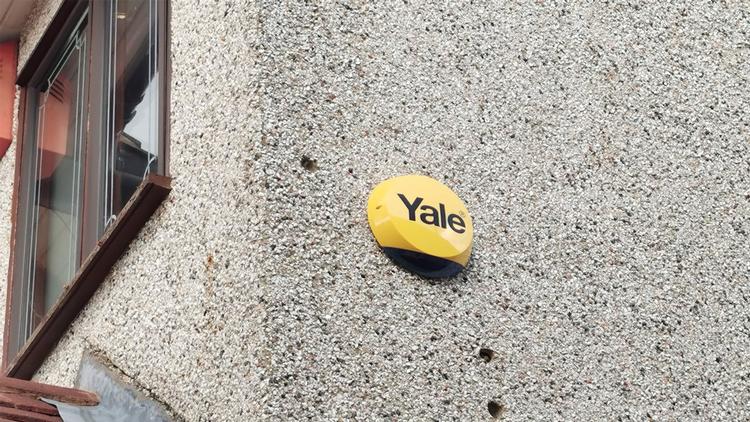 Once the battery cut-off tabs have been pulled, and the app installed and a user account created you can arm and test the system. However, if you don’t want to set the sirens off to test each sensor, you can enable those chimes which will sound when the sensor is triggered.

There’s also a walk test, but this is really only to test the signal strength between each sensor and the hub: you press the sensor’s button and watch in the app for it to appear with a signal strength meter.

Range is claimed to be 200m, and we had no problems in our semi-detached test home, which included installing a door contact on a shed at the bottom of the garden, although this was only around 35m from the hub, and through a couple of walls.

Like the instructions, the app could be much slicker and more intuitive. The main screen is very plain – a good thing if you mainly want to use the app to arm or disarm the alarm, but all the empty space (which you can see on most screens) could be put to better use. 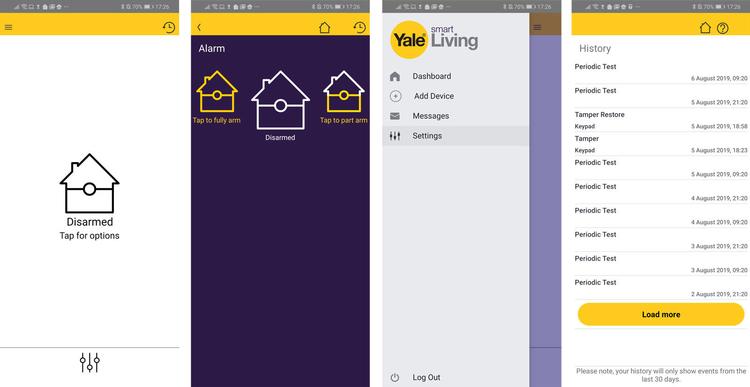 If you tap on what looks like a settings icon at the bottom you go to a Control screen which is only useful if you have the compatible smart power sockets or smoke detector. Tap the icon in the top right corner and the History screen will tell you what happened over the last 30 days.

The system is also compatible with Philips Hue bulbs (no other brands, sadly) and Amazon Alexa (but not Google Assistant), so you can set your lights to flash red when the alarm sounds, and you can ask Alexa to arm or disarm the alarm.

The default phrase is clunky: “Alexa, ask Yale Smart Living to arm the alarm”, but if you rename the hub to “Home alarm” you can simply say “Alexa, arm home alarm” and it works fine. Naturally, you have to enable the Skill and authorise your Yale account in the Alexa app first.

Under the actual Settings menu you can get to Alarm Settings, Lock Settings (only relevant if you have a Yale smart lock), Users and Hue integration. In Alarm Settings you can see the paired devices and choose what happens when each sensor is triggered in both fully-armed and part-armed modes. 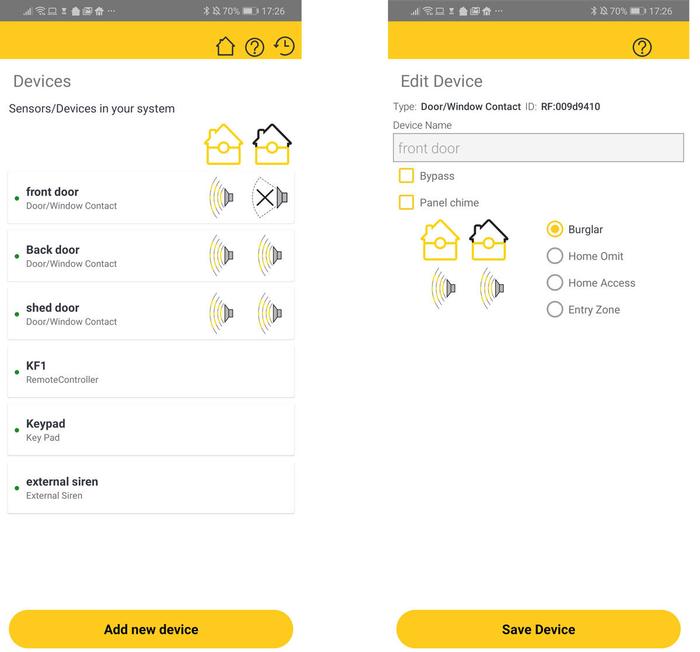 It’s easy to rename each device and select whether it causes the hub to chime (though the option is called Panel Chime).

Under System Settings you can choose the entry and exit delay times, and how loud the sound is. You can’t choose how long the siren sounds for, however. 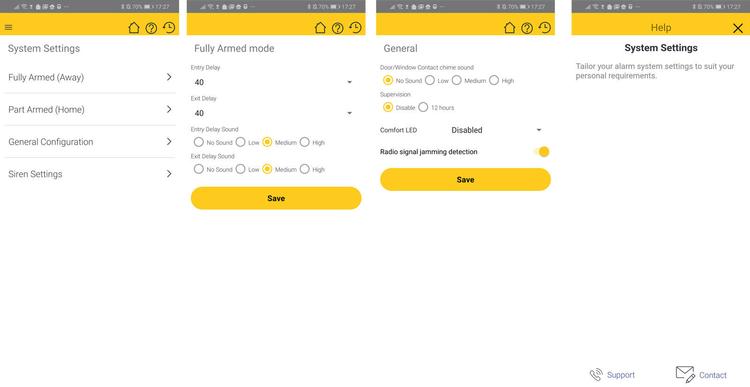 Although you can tap the ? icon, the actual Help text is usually extremely unhelpful. We had no ideal what the Supervision option did, and Help provided exactly no help on the matter.

It’s also tricky to manage notifications. For example, even if you create sub-accounts so other family members can use the app, you can’t turn off email notifications for them. So they will have to do it themselves. And the email presentation is even worse than the app. It’s almost as if they were intended only for engineers’ eyes: it’s tricky to decipher what happened when: 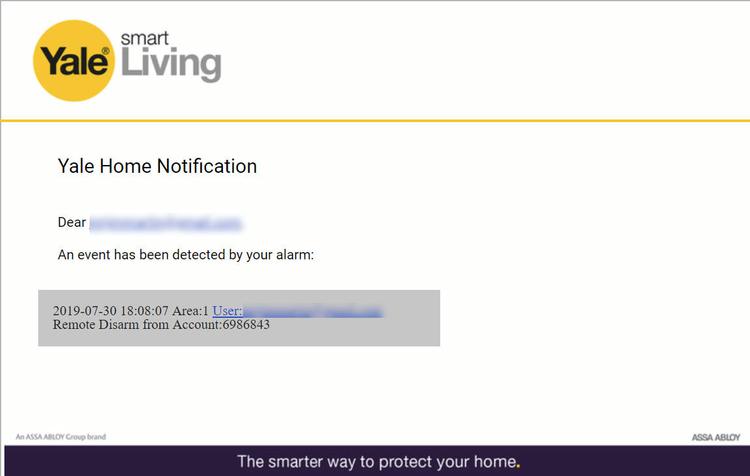 Overall, the Yale Sync alarm is a good system. It’s well priced, works reliably and essentially does what you want it to do. It’s a good choice for anyone who dislikes the idea of paying a monthly fee for someone else to monitor the system, and feels competent to install it themselves.

We’d like to see Yale improve the app and notifications, but these are relatively minor complaints and not reasons to avoid this alarm.