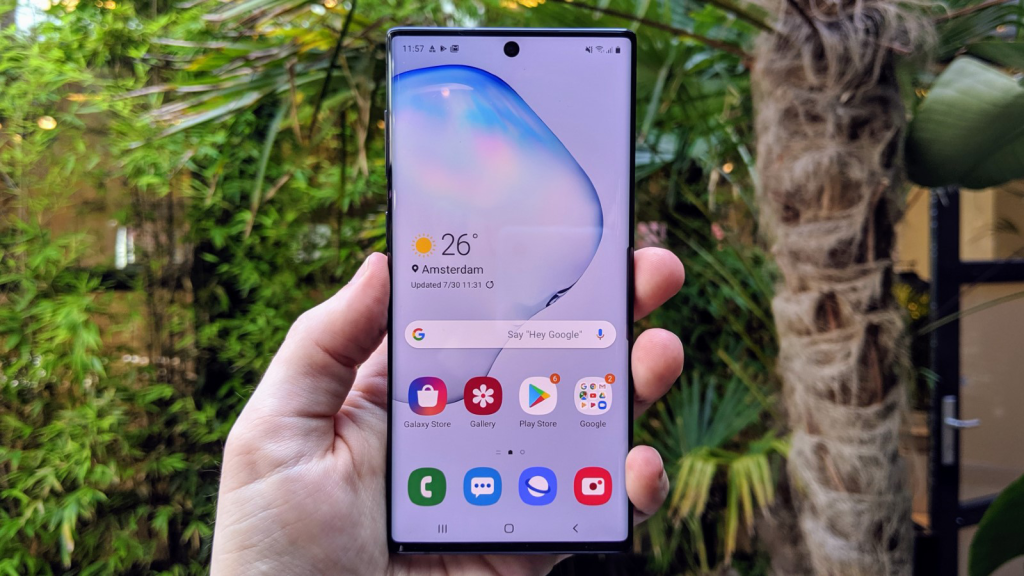 The Note 10 features a slimmer, more compact design than last year’s model, all while offering a gorgeous 6.3in display with HDR10+ support and an insane screen-to-body ratio, so long as you don’t mind the ‘punch-hole’.  To achieve this, Samsung has removed the headphone jack and microSD card slot, which may sour the taste for some long-time adherents to the Note line. If you like power in a smaller package, then the Note 10 is excellent, but those seeking a ‘true’ Note might want to go with the Note 9 instead or the Note 10+ if you can afford it.

Samsung has updated its flagship Note range once more with the unveiling of its new Galaxy Note 10. This iteration brings with it some new features as well as the retirement of some older ones. So, is it worth selling your Galaxy Note 9 and making the leap to the latest and greatest? We see how the two models compare.

Breaking with tradition, the new Note 10 will come in one storage configuration (256GB) but without a microSD card option to increase this capacity. Should you require more then there is the Note 10+ which offers either 256- or 512GB.

The phones are now  on sale now at Samsung. You can also get the phone from various places like  Amazon,  Carphone Warehouse,  EE,  Vodafone,  O2,  John Lewis and  Argos.

You’ll be able to buy one from the retailers mentioned above, plus there are bound to be some reductions from mobile carriers now that the unit is no longer the flagship model.

At one time the Note handsets seemed gargantuan when compared to normal phones, but these days they barely stick out in the crowd of larger Android devices. This is even more the case for the Note 10 as its dimensions are more compact that its predecessor. Where the Note 9 came in a 161.2mm x 76.4mm x 9mm frame, the Note 10 reduces this to a svelte 151mm x 71.8mm x 7.9mm.

Construction remains top quality, with the Note 10’s thin metal frame playing host to a glass back and a 6.3in Dynamic AMOLED display on the front. That’s slightly smaller than the 6.4in panel on the Note 9 and there’s also a lowering in the resolution from 2960×1440 to 2280×1080, albeit with the inclusion of HDR10+ certification.

To install such a large screen in a smaller body, Samsung has opted to go with its ‘punch-hole’ design which debuted on the S10 and S10+. This positions a small, circular hole at the top and centre of the display. It’s not quite a notch but remains a variant on the theme. This allows the S10 an amazing 94.7% screen-to-body ratio, with the S10+ following closely behind with 93.20%.

Those preferring their displays without missing bits here and there will no doubt find safe harbour with the note 9, which chooses to place the camera array above the display. This does make it a little taller, but ensures that the screen remains free of any OCD-inducing obstructions.

The Note 10 removes some hardware options that might raise a few eyebrows. Gone are the 3.5mm headphone jack, Bixby button, and heart rate monitor, as well as the aforementioned microSD slot (the latter only on the standard model). Presumably this is all to save space and contribute to the compact design, but if you want the bells and whistles that have always accompanied the Note line then last year’s model may be the way to go.

Of course, there’s still the S-Pen that nestles inside the body, which can be found next the USB-C charging port. On the rear there’s a fingerprint sensor or you can use the facial recognition ability of the front facing camera should that be your particular fancy.

All units feature IP68 ratings for water and dust proofing, so your expensive purchase should survive a tumble into the bath without issue.

As you’d expect with a Note, the components are top of the line. Processors are either the new Exynos 9825 (UK) or Qualcomm Snapdragon 855 (US), making them a step up from the Snapdragon 845 / Exynos 9810 found on the Note 9.

This is accompanied by 8GB of RAM on the Note 10 or 12GB on the Note 10+. Storage is something of a surprise, with Samsung granting the Note 10 a moderate (at least in Note terms) 256GB of non-expandable space. Things are better on the Note 10+ with either 256GB or 512GB plus up to 512GB of extra capacity via microSD.

Compare this to the Note 9 which offered 128GB or 512GB both with support for microSD cards up to 512GB.

Cameras are another area of interest in the Note lineup and this year sees the introduction of a three-lens array on the Note 10. These comprise of a 16MP f/2.2 Ultra-Wide, 12MP Variable Aperture f/1.5-f/2.4 Wide, and 12MP f/2.1 Telephoto.

Around the front there’s the 8MP f/1.7 selfie camera, which again has seen an upgrade to the 10MP f/2.2 lens fitted in the Note 10. Should you really want to go to town then the Note 10+ takes the compliment on the Note 10 and adds a further DepthVision f/1.4 camera.

Galaxy Note handsets are renowned for incorporating cutting-edge technology, so it should be no great surprise that the Note 10 comes with 5G LTE compatibility. However, you’ll have to buy the specific Note 10+ 5G variant if you want this.

The S-Pen has been given a boost by extending the battery life and some additional new modes for Air Actions, including use with the camera, gallery, and various media. But, mainly it’s the same that on the Note 9, which is no bad thing.

Here’s a breakdown of the technical specifications for each model;

The Note 9 arrived with Android 8.1 Oreo and Samsung’s Experience 9.5 interface. It’s still a bit heavy-handed if you prefer the stock Android that you’ll find on the likes of the Google Pixel 3a, but the design is classy and on the whole it’s easy to get along with.

Note 10 users will be running  Android 9.0 software with Samsung’s One UI interface. This is an even further refinement of Samsung Experience and one that we quite keen on. There’s also the promise of a partnership with Microsoft which will allow close integration between the phone and Windows 10. This should allow calls to be answered on a PC, along with messages and other features.