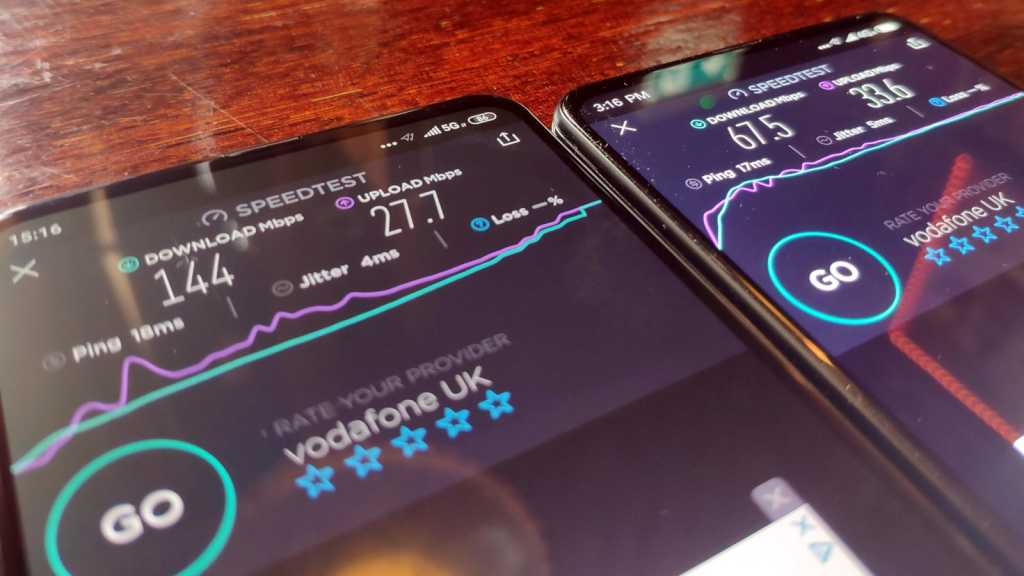 The Mi Mix 3 5G is faster and has a higher-capacity battery than the standard Mi Mix 3, yet weighs only 8g more. And while Vodafone’s 5G network is patchy right now, by the time you’re even halfway through your 24-month contract we should be in a completely different situation in terms of coverage. But are you prepared to pay double dollar for the priviledge of future-proofed connectivity and slightly better performance on an already fast phone?

Vodafone’s 5G network has been switched on in a number of key locations around the country, including Birkenhead, Birmingham, Bolton, Bristol, Cardiff, Gatwick, Glasgow, Lancaster, Liverpool, Manchester, Newbury, Plymouth, Stoke-on-Trent and Wolverhampton, as well as home to Tech Advisor’s office, London. You can also roam on the Vodafone 5G network in 55 European cities.

But to say Vodafone 5G is available in London is a bit of a stretch, with coverage described as patchy at best. The closest 5G spot to our Euston Road office is a 10-minute walk away in Pentonville Road. We strongly advise you to check out Vodafone’s 5G coverage checker with the exact location in which you’ll be looking to use 5G before upgrading to a 5G phone.

Vodafone’s 5G plans themselves are no more expensive than the 4G plans, it has to be said, but 5G-capable phones come at a premium.

Mi Mix 3 5G is Xiaomi’s super-value slider phone, and a Vodafone exclusive. Its cheapest 5G plan comes with 5GB of data, which is likely not enough if you’re using 5G to its full potential, and costs £48 per month with an upfront fee of £29. The total cost over the 24-month term of the plan is £1,181.

For unlimited data the best deal will set you back anywhere between £56 per month (Unlimited Lite) and £63 per month (Unlimited Max), or £65 per month with an included Amazon Prime Video, Spotify, NowTV Entertainment or Sky Sports Mobile Pass. You’ll still pay £29 per month, so the total cost here is £1,373, £1,541 and £1,589 respectively.

Consider that the non-5G version of the Mi Mix 3 costs £499 direct from Xiaomi, and as little as £379.98 from eBuyer. Add a couple of hundred quid for a SIM-only plan and you’re looking at somewhere near £600 if you don’t need 5G.

Of course, the inclusion of a 5G modem is not the only difference here. Whereas the SIM-free Mi Mix 3 comes with a 10nm Snapdragon 845 processor and Adreno 630 GPU, the 5G model has the next-gen 7nm Snapdragon 855 and Adreno 640. The Snapdragon 855 is claimed to offer a 45% improvement in overall performance and a 20% boost in graphics, as well as improved efficiency.

The 5G model is also a little bit chunkier to allow for the 5G modem, but the difference amounts to just 8g on our scales (220g vs 228g). Despite this, Mi Mix 3 5G packs a 3,800mAh battery in comparison to the standard model’s 3,200mAh. With the standard model you get a free wireless charger in the box, so it’s swings and roundabouts.

Your choice between Mi Mix 3 and Mi Mix 3 5G therefore comes down to three things: how much performance matters to you, whether 5G is available in your area, and what is your budget. Let’s look at performance.

In order to test 5G performance we headed to The Lexington on Pentonville Road, slap-bang in the middle of what Vodafone says is one of its strongest coverage areas for 5G within London.

We sat Mi Mix 3 and Mi Mix 3 5G side by side, with both running on Vodafone’s network, and simultaneously ran our benchmarks. It came as no surprise to us that 5G is faster, but we had expected to see a greater difference between the two phones.

Using the Ookla Speedtest app we ensured each phone was connected to the same server, then ran several revisions.

The Mi Mix 3 5G hit a high of 144Mbps for downloads, but was typically closer to 110Mbps. It also recorded 41.2Mbps for uploads, but went as low as 19.5Mbps in one test, often turning in around 27Mbps.

Despite the 5G network promising lower latency, ping was typically higher at around 18ms on the 5G model versus 17ms on the 4G model, going as high as 20ms in one test.

Speedtest is just a synthetic benchmark, so we also ran some real-world tests. Tech Advisor’s admittedly ad-heavy website loaded around a full second faster on the Mi Mix 3 5G, which doesn’t sound like much but if you’re doing a lot of browsing all those seconds will add up.

We also downloaded the movie we use for battery benchmarking, The Book Thief, on to each device. We did this twice, because surprisingly the first time Mi Mix 3 had finished downloading the film and the 5G model had reached only 58%. The second time around it was first to the finish line, with a 20% lead over the standard Mi Mix 3. It seemed to us that 5G speeds were generally very good, but also a bit hit and miss.

Given that 5G is going to be available to you only some of the time, we also ran other synthetic performance benchmarks on the two phones. Our two staples, Geekbench and GFXBench, refused to run on Mi Mix 3 5G, but we did get it to complete AnTuTu and PCMark for Android.

Drilling down into the various components of PCMark we found the 5G Mix took the lead across the board, with consistently higher performance. We’ve compared all our test results in the chart below.

Mi Mix 3 is a great phone, and will cost you half what it costs you to upgrade to the 5G version. If your budget has no limit you’ll find faster network connectivity in a few UK locations (with improved coverage gradually rolling out over the next year), and generally better overall- and graphics performance from Mi Mix 3 5G.

If you are due an upgrade anyway then it makes sense to start thinking about 5G, but for everyone else there’s no immediate rush to jump on the bandwagon.

Also consider that Vodafone is not the only UK mobile operator with a 5G phone service – EE has already gone live, with Three following in August and O2 in September – though Vodafone is the only one to stock Mi Mix 3 5G, the best-value 5G phone.

Learn more in our full guide to what is 5G and in our round-up of the best 5G phones and best 5G phone deals.