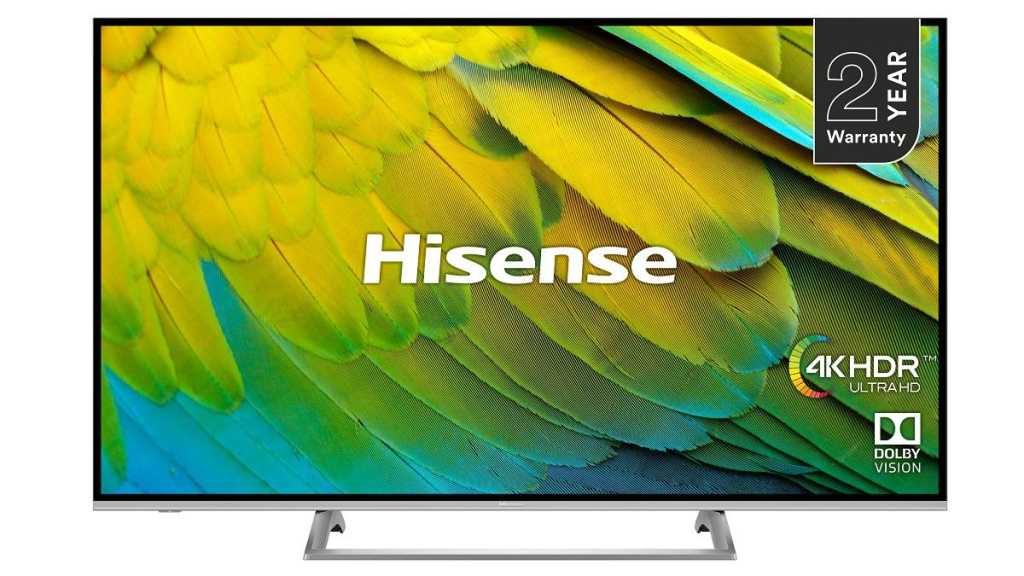 Hisense has done it again by offering a remarkably good Ultra HD TV with HDR at an affordable price. If you don’t have the money for a flagship model, rival or not, the B7500 is easily one of the best mid-range TVs you can buy.

If you don’t know Hisense already, the Chinese firm has taken the smart TV market by storm, offering high quality sets for much cheaper prices than the big names. The latest 4K model, the B7500, is no different.

Everyone wants a good-quality TV but it’s not always easy to scrape together enough cash to get the kind of modern specs and features you want. After all, flagship sets from the likes of Samsung and LG can be eye-wateringly expensive.

The B7500 is the official TV of the Euro 2020 football tournament and we’re quite astonished at what you can get for your money. In a nutshell, a sleek, easy to use TV with a fantastic quality picture and some smart features to boot: similar to what we found with the Hisense U7A last year.

For alternatives, check out our chart of the best TVs you can buy. We’ve also tested the Hisense U8B.

Getting the B7500 unboxed and set up is pretty simple. We even found handling the 50in size solo reasonably easy as the TV weighs only 8.9kg including the stand. The stand quickly attaches to the bottom with a few screws, then all you really need to do is get it in position and plugged in.

Cheap TVs tend to scrimp on design with a chunky bezel and flimsy plastic but that’s not the case here. It might not be quite as swish as some rival flagships but the B7500 is very impressive when it comes to style for an affordable set.

The B75000 comes with a decent remote control, which is nicely weighted and has rubber buttons that are smooth to the touch. You get a selection of buttons to directly access various apps such as Netflix which come in handy.

Our main complaint is that the numbers don’t double up as letters so you’ll need to navigate with an on-screen keyboard instead. Some of the buttons are also a little close together.

As with any TV, there are a range of ports on the back which are easily accessible. Each leg has a flexible plastic channel that the cables from the TV can run through which isn’t the neatest solution ever but is better than nothing.

The B7500 is responsive to input thanks to a quad-core processor and the VIDAA U 3.0 Smart TV OS interface is intuitive to use – two things you can’t always assume for a cheaper model.

There’s access to a wide range of catch-up and on-demand services from the TV without having to use something like a Chromecast or Roku. The B7500 has apps for Netflix, Amazon Prime Video, BBC iplayer, All 4, 5, UKTV, YouTube, Rakuten, YT Kids, BBC Sport and more. It’s also got Freeview Play.

As is the case with some TVs, there are a few minor spec differences between the different sizes. The main things to point out is that the 43in model also doesn’t get Smooth Motion 100 so it’s worth opting for the 50in at least.

The two larger sizes have slightly brighter displays at 350 vs 300 nits. You’ll also get more powerful speakers on the biggest model and weaker ones on the smallest.

Speaking of audio, there’s no headphone jack on the back nor an optical output which is a shame but likely a cost-cutting measure. The sound quality from the built-in speakers is decent with a richer profile than most TVs at this price. You can choose different sound profiles be we found standard to be good enough.

A little gripe, as is the case with some TVs, is the way a mute logo stays on the screen the whole time you have sound muted.

Ports on the back are easily accessible and there are three HDMI 2.0 ports with one supporting ARC (audio return channel). There’s also two USB ports and an Ethernet port but you’ll probably want to use Wi-Fi instead to avoid trailing a cable.

We tested the 50in model which is something of a sweet spot for price and specs. We didn’t for example, wish that the display was brighter so buy the bigger models for the literal size, rather than the spec differences mentioned above.

It’s a 4K resolution here and although you might see some 8K TVs popping up, there’s really no need to jump to that resolution yet. The BBC is still trialling 4K at events like Wimbledon, for example.

The picture is crisp and sharp and the colours are vibrant without being over saturated. Contrast is also surprisingly good for an affordable TV so the intro to one of RedBull’s feature films shows excellent levels of detail on a crow’s feathers in the intro.

Of course, the picture can look dramatically different depending on which mode you choose. We tested mainly in standard mode but you can also choose cinema day, cinema night, dynamic and sports.

Which you like will come down to personal preference and also what type of content you’re watching. They all have their pros and cons but the standard mode is a nice balance and works well for almost anything.

There is a game mode available should you want to hook up a games console but it’s oddly off in a different part of the settings menu.

Various picture quality settings can be adjusted manually including the backlight and noise reduction. You can even, if you feel confident, head into the expert section to tweak white balance, gamma and the like.

Even at this low price, the B7500 supports HDR content and it looks great. It’s not as vivid or impactful at a more expensive screen that has more brightness to offer but that’s to be expected – we found the same with the U7A.

There’s no local dimming here but that’s not surprising for an affordable TV. The DLED backlight does a pretty decent job of providing a consistent and even experience, though. Viewing angles are good too, quoted at 176 degrees and there’s not too much colour saturation drop-off as you move away from center.

There’s a recurring theme as motion smoothing isn’t quite on a par with you’ll find on flagship sets but it’s impressive for the price. There’s some jerkiness for panning shots but it could be a worse. Since the models at 50in or larger have Smooth Motion 100 to help with this, it’s one reason to avoid the smaller 43in size – even though it’s still 60Hz.

You can adjust the smooth motion in the menu – between smooth, standard, clear and custom – but we didn’t really notice much difference between them to be honest.

Hisense has once again lived up to the expectation of creating an excellent TV at budget-friendly price. The B7500 is better than you would expect for a set under £500 starting with the sleek design.

You can spend more than that if you really need a bigger screen but we think 50in is the sweet spot for the average home anyway. And we’d recommend spending the extra if you’re looking at the 43in size to get better audio and Smooth Motion 100.

At this mid-range level you miss out on things like local dimming, and even an optical out port, but those shouldn’t matter too much considering the quality here.

The B7500 offers an excellent Ultra HD picture with HDR support and decent motion smoothing, too. We’re also impressed with the user interface and the amount of on-demand and catch-up services available.