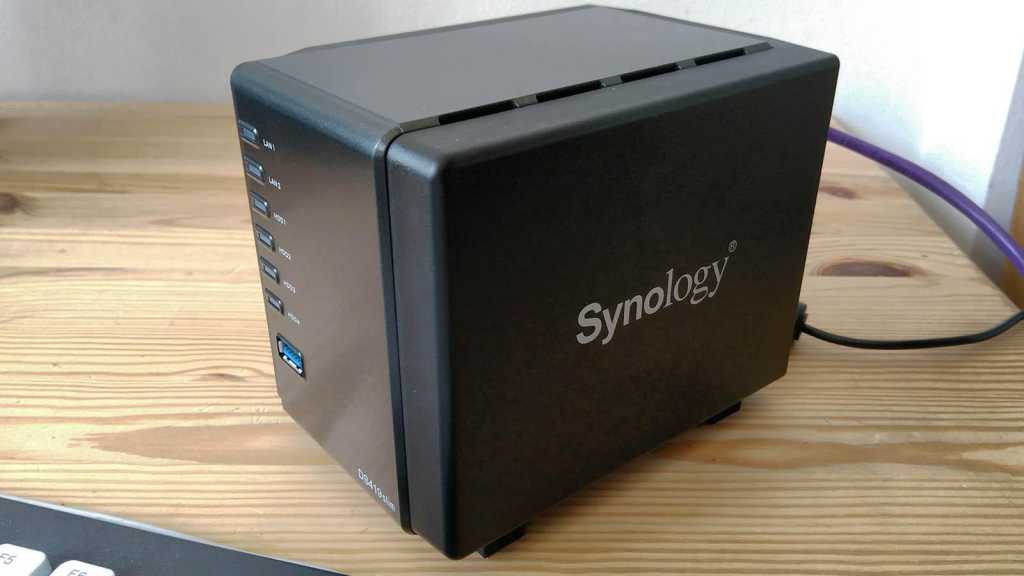 On paper a NAS drive that uses 2.5in drives might seem interesting until you realise the limited sizes available for NAS use, and the cost of owning them. Unless you really need a compact NAS drive, another model is likely to be a better choice.

From childhood, many of us are entranced by miniature versions of familiar items, an interest that often manifests itself in railway sets and model making. But what if you could take regular computing platforms and make them small too? Surely, we’d love them.

That appears to be the logic that Synology applied to the DS419slim, an excessively cute NAS box that limits itself to 2.5-in hard drives to deliver a miniature version of a classic four-bay NAS design.

Small it might be, but there is a downside to that scale, we discovered.

That makes it about £70 more than the very similarly specified Synology DS418j, a unit that can take four drives of either 3.5- or 2.5in format drives.

US customers get a slightly better deal, where we found it for $329.99 on Amazon.com.

Normally we’d mention other comparable designs from other companies, but the only direct competition for this hardware is the previous version, the DS416slim, and that retails for around 30% less if you can find one.

QNAP made the TS-451S, TS-453S Pro and TS-853S Pro that all used 2.5in drives, but these are much more powerful platforms have been discontinued, it seems.

Check out out chart of the  best NAS drives.

Synology rarely changes the external appearance of its systems, and therefore, we weren’t hugely surprised to discover that other than the name graphic, the DS419slim looks identical to the DS416slim that it replaces.

The front face has six LED indicators that cover all four potential drives and the two LAN adapters. The power button is on the left edge and around the back are the Ethernet ports, another and access to the four vertically mounted drive bays. 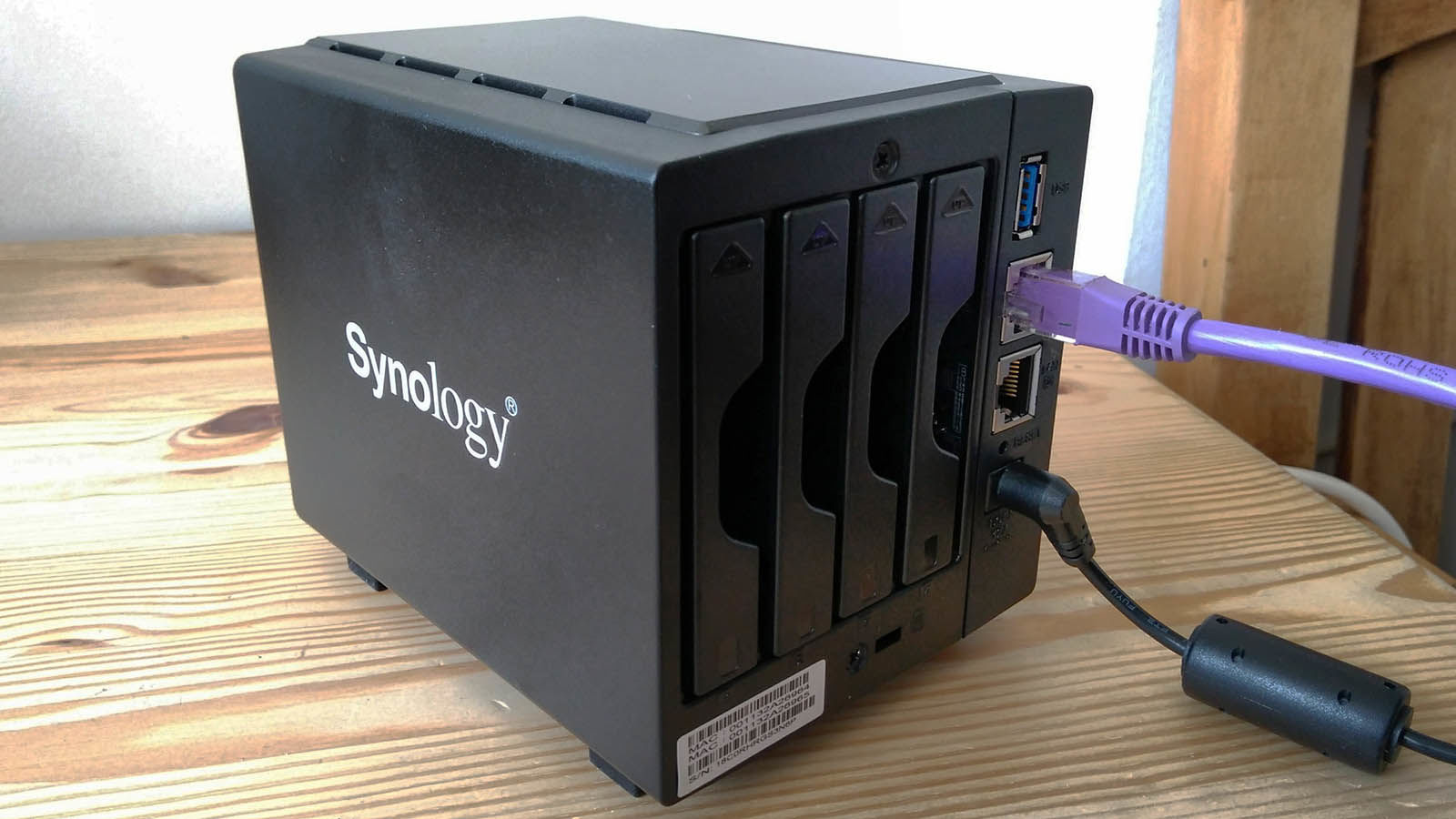 The drive trays are plastic but do an effective job of aligning the mechanisms with the SATA receptacles buried deep inside this tiny box.

The whole unit is just 10.5cm wide, the same tall, and just 14.4cm deep. And the design has two USB 3.0 ports, one each on the front and back. These can be used for external drives or printers for network sharing.

It’s a four-bay NAS, but much smaller than you would normally expect.

One job we always do first when reviewing this type of hardware is to look at the predecessor and see what has changed, and what hasn’t. The most striking aspect of comparing the new DS419slim with its DS416slim predecessor is how little has altered. Because on paper they’re incredibly similar.

The quoted drive capacity on the DS416slim as 8TB (4 x 2TB) and that is raised to 20TB (4 x 5TB) on the newer model. But we know that the larger capacity drives will work on the DS416slim. And, both can still only address 16TB in a single volume irrespective of the size of drives get installed.

Almost every other factor, like the maximum number of concurrent users, is the same. 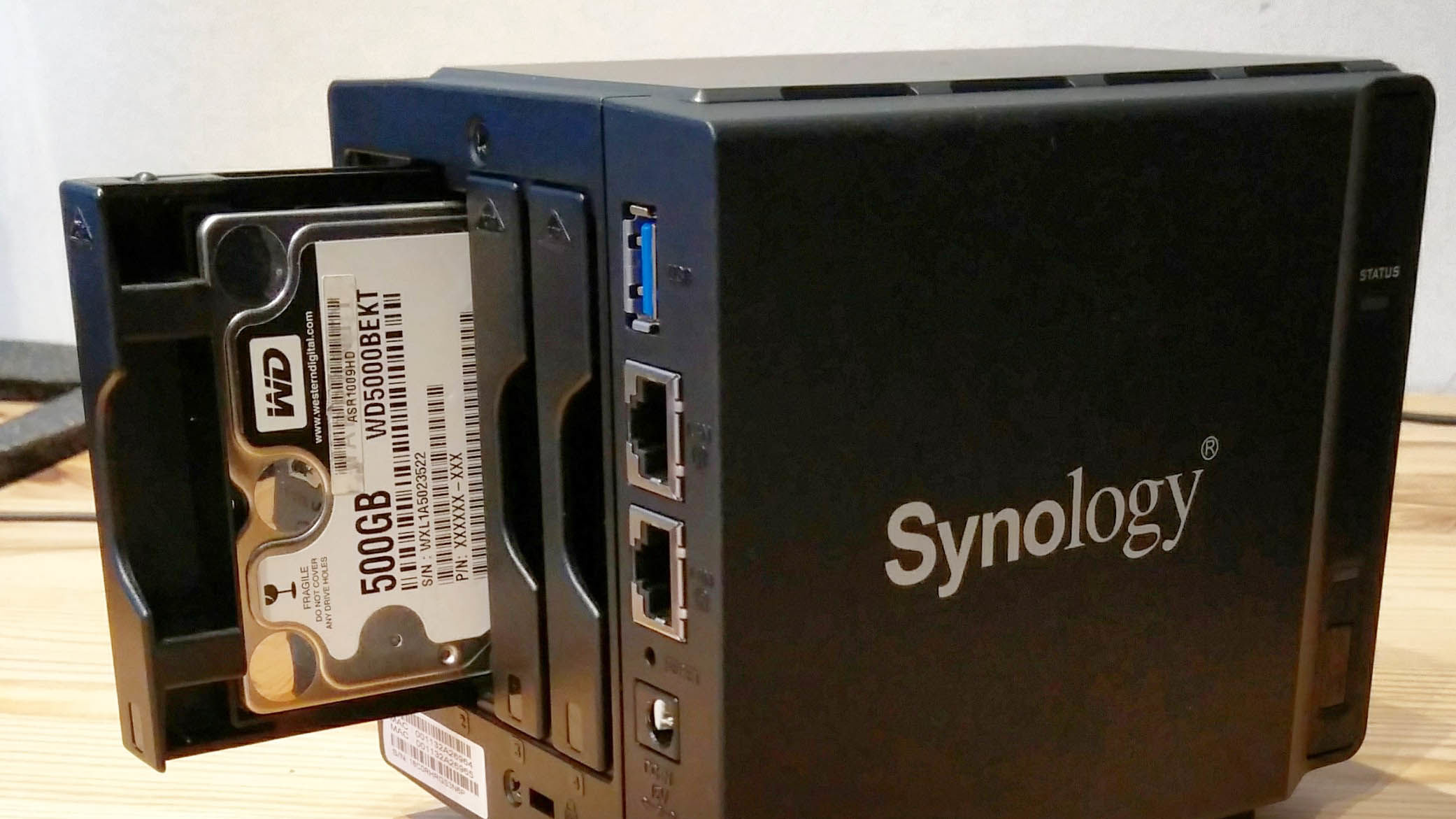 The only other differences are that the extra power delivered by the 333MHz CPU clock boost allows for some H.265 modes to be supported on the Surveillance Station app that isn’t available to the older equipment. If you use Surveillance Station, then this might be important to you, but otherwise, it isn’t a big change.

As Synology didn’t balance the CPU clock speed increase with any additional memory, this machine isn’t any better at running multiple applications than its predecessor, as it will run out of RAM at the same point.

If you are wondering why Synology didn’t enhance this system more, its problem is the sheer number of NAS devices it makes, and the conceptual pecking order created between them. Making the DS419slim much better would probably step on the toes of the DS419 when it arrives and boosting that design to compensate would impact on other models.

That leaves us with a distinctly tepid warm-over, where the new gear is a very modest enhancement over the part it replaced.

One thing you’re paying for here is the Synology ecosystem. The position of this company as the premium NAS box maker is no fluke. It created a whole new market for these devices with a highly flexible OS and installable application platform that no other maker has yet to rival.

Therefore, alongside being implausibly small and nimble, the DS419slim has access to the same infrastructure as all the other NAS devices that Synology makes.

It can be a web server, development platform, surveillance system, video and audio distribution system, mail server, database or a hundred other things. At the time of writing, Synology has 37 homegrown applications and 64 third-party created tools to download and install on this platform, many more than any other NAS OS. 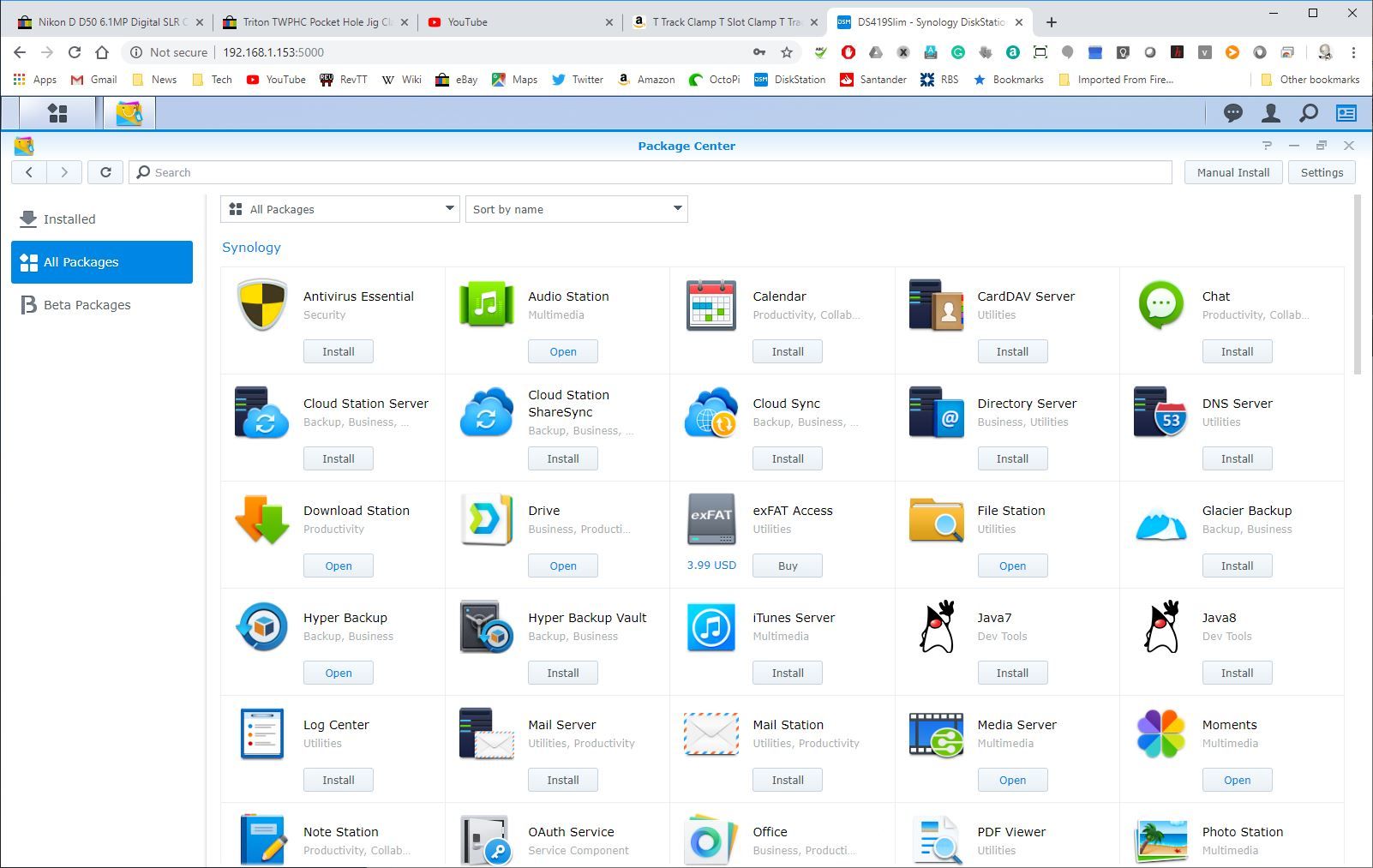 It truly is an Aladdin’s cave of software wonders, where you can live sync folders from your PC or Cloud services, backup other servers, collaborate with others on shared documents or even run an internal business chat system. And, this is all included in this tiny NAS enclosure that is easy to install and deploy for anyone with a small amount of technical knowledge.

The software side of this equation has a massive tick against it, but there are some problems associated with the choices Synology made to deliver the DS419slim and the machines that came before it.

We’ve covered the cost of the NAS drive itself but the storage you need to put inside it is a big factor here. And in this case it’s especially key since the DS419slim only takes 2.5in, not the larger 3.5in size meaning there are very few NAS specific drives in this format.

Western Digital, for example, only makes a 1TB Red series drive in the 2.5in format currently.

Those wanting more space are either forced to use bigger drives built for general use or pay the excruciatingly high cost of Seagate’s IronWolf 110 series 4TB drives. These are an eye-watering £908.07 ($980) each for 4TB, bringing the total cost of four of these drives and the DS419slim to around £4,000 ($4,500). 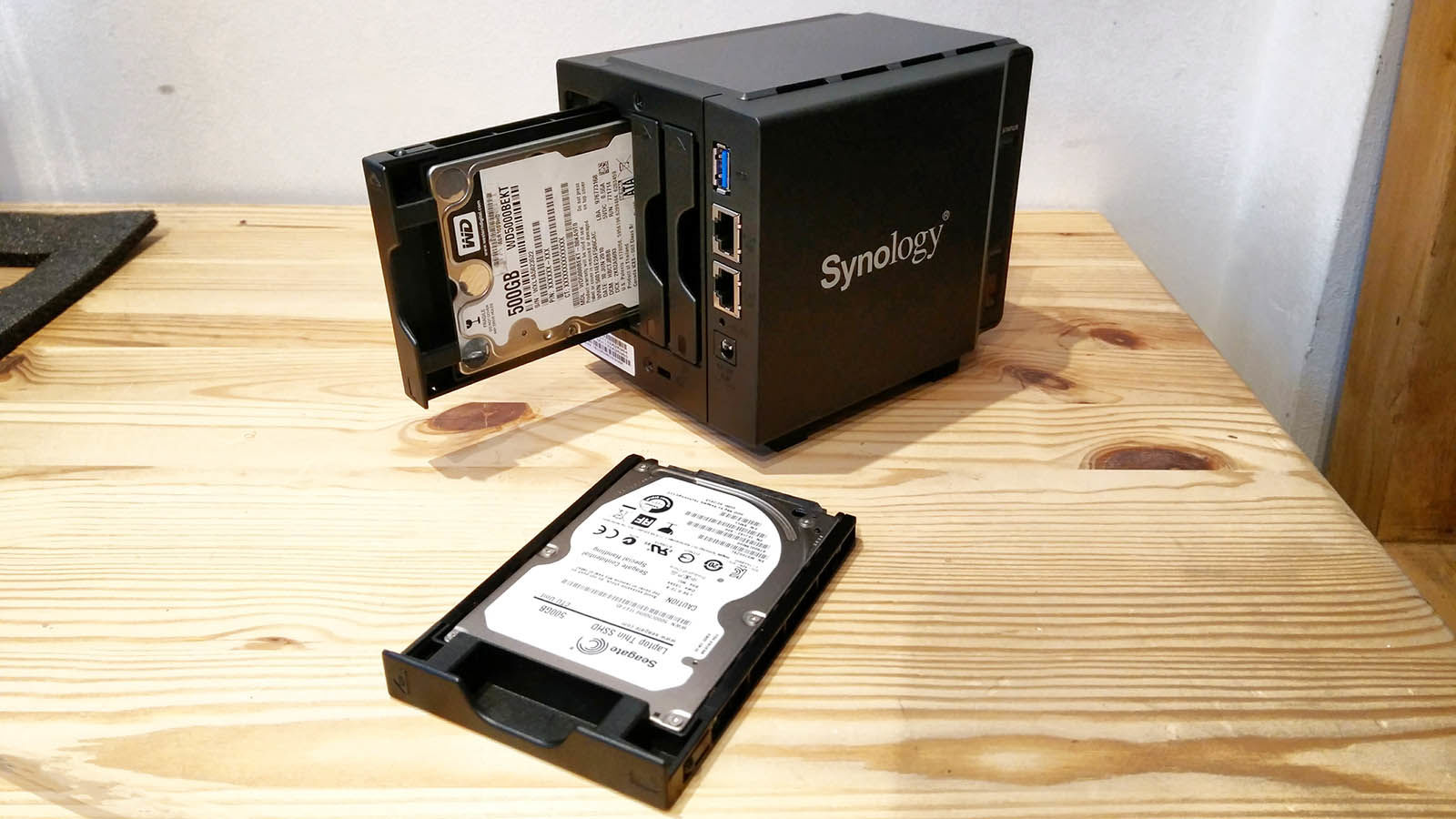 The pricing of Seagate drives isn’t Synology’s fault, but it undermines the cost-effectiveness of its solution. Drives will come down in price, but at what point will the premium for going small make any fiscal sense?

There is an obvious answer to this, and it’s that this unit will be perfectly placed when very cheap and massive SSD drives come the market, and they will eventually.

As cute as this tiny NAS box is, there are issues with being limited to using 2.5in drives as detailed above. So you’ll really have to want a compact NAS drive to go in this direction.

The DS419slim also doesn’t have the LAN connectivity to make use of the massive read and write performance that four SSDs could deliver, bottlenecked as it is with dual Gigabit LAN. The ideal platform then will have a 10GbE connection or even dual LAN of this spec.

That leaves the DS419slim as a very marginally better DS416slim, that has yet to evolve into the machine it will ultimately need to become, maybe three years from now. Unsurprisingly, there are very few alternative NAS boxes offering this form factor limitation, because it makes dubious commercial sense to most makers of this equipment.

Unless you have a large bag of large capacity 2.5in form factor drives handy, the DS419slim is an expensive choice for what other Synology products can do better and cheaper. You’re probably better off getting a Synology DS418j instead – it costs about the same but has an even better CPU, double the RAM, and uses much cheaper drives that come in bigger capacities.