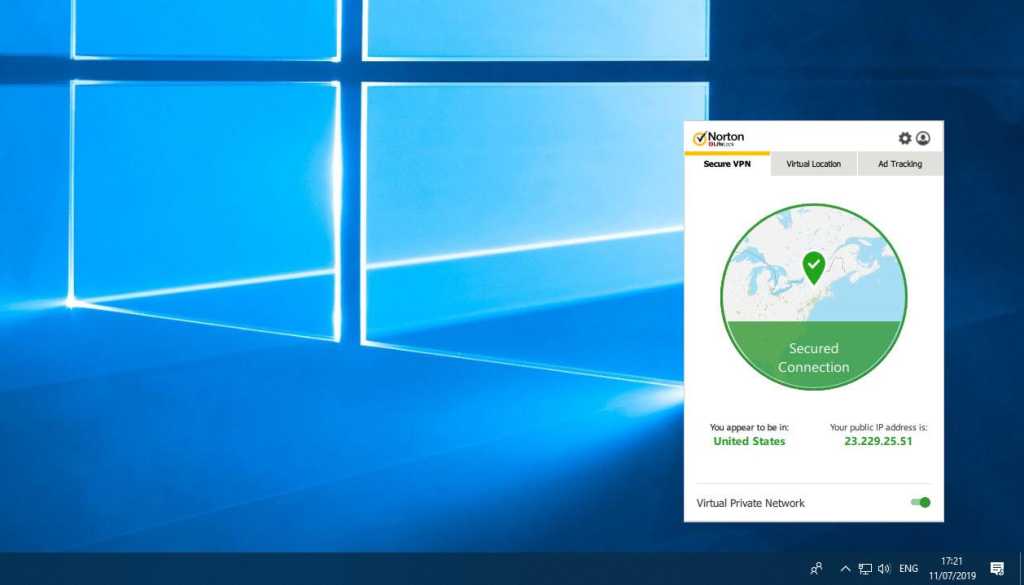 Norton Secure VPN is a bare-bones service which lacks features and doesn’t have a the server coverage or knowledgeable support possessed by some of its rivals.

Norton is a huge name in antivirus, being part of Symantec’s stable of security products. And while it is a relative newcomer to VPN, it still fits in with the security theme. Norton Secure VPN used to be called Norton WiFi Privacy, but at some point the name was changed to – we assume – make it clearer that it’s a VPN service. But it’s still called WiFi Privacy in some regions.

Rather than do what some antivirus companies have done and buy in a white-label service from an established VPN provider, Norton set up its own back in 2016. That’s admirable, but as of the time of this review – July 2019 – it offers a choice of 30 locations.

Again, that is reasonable, but it is a fraction of what you can get with rival services. There is no mention of how many servers are available, and no way to connect to a specific server. You can only choose a region from the list. You must be connected to an automatically selected server before you can choose a different region, and you can’t save favourites.

These are just a couple of the many disappointments we found during our testing of Secure VPN.

Norton customers using Norton 360 Standard, Deluxe and Premium have Secure VPN as part of the package, so there’s no extra charge.

You can buy it as a standalone product, though, but unlike most VPN services there’s only an annual payment available (unless you’re in the US or Spain), so you can’t pay monthly or save by signing up for two- or three years.

For those in the UK there’s a 50 percent discount for the first year, so it’s £19.99 for a single device, and the subscription will automatically renew at twice that price after a year. Oddly, the discount is lower if you’re in France: it’s €29.99 for the first year for one or five devices.

You can pay with credit or debit cards, or PayPal but there’s no anonymous payment method.

Here’s a selection of the best VPN services that we recommend you check out.

Designed primarily to secure your devices when using public Wi-Fi, Norton Secure VPN is a nice bonus if you already have a Norton 360 subscription.

You install the app on your iPhone, Android phone, laptop or MacBook and enable the VPN when you’re on public Wi-Fi. There’s an option in the settings to do this automatically whenever you connect to an untrusted wireless network, which is good news for the forgetful.

It will automatically connect to the server offering the best performance given your location, and it secures your connection to the internet by using 256-bit encryption over the OpenVPN protocol.

That’s all good stuff: it’s what we’d recommend if you had a choice of protocols. The apps also include a feature which blocks ad trackers, and it’s turned on by default. This stops you being followed around the web and then served up ads based on what’ve been looking at.

Connecting to the VPN takes just a couple of seconds so you’ll barely notice it happening, and we found speeds were decent on all the servers we tried. They’re likely to far exceed the speed of any public Wi-Fi network, anyway. (We did once find a Marston’s pub in Nottingham with a 99Mb/s download speed, but such exceptional free Wi-Fi is extremely rare).

There’s more good news: Norton Secure VPN passed all our security tests with no issues, so our real IP address and location was never leaked and websites only saw our virtual location.

So, if you’re already using a Norton 360 product and just wanted to know if Secure VPN does its job properly, you can stop reading now and surf happily at airports, coffee shops and, yes, Marston’s pubs.

But if you’re wondering if you should buy Norton Secure VPN on its own, you’ll want to know what else we found.

There are quite a few drawbacks compared to rival VPNs which mean Norton Secure VPN isn’t a great choice.

First, and we’ve already talked about it, there’s the limited number of locations. This isn’t a huge problem, but for the same or less money you can sign up for a service which has a much larger selection and which could well offer better speeds in more locations.

Second, the apps are incredibly basic. This means they’re very easy to use, but they don’t offer any extra features such as a kill switch or split tunnelling. The first stops all internet traffic should the VPN connection drop and the seconds lets you use the VPN with specific apps rather than forcing every app and the operating system to use it.

For undemanding users, neither of these is a problem and it’s rare that a VPN connection drops anyway. But again, you can have these features with other VPN services. And it’s annoying that the Windows app is tied to the notification area and can’t be moved or resized.

A limitation which might be a deal-breaker is that torrenting and P2P aren’t allowed on Norton’s servers, and you can’t use the service with Tor either.

The four main platforms are supported, which covers most devices – Windows, macOS, Android (shown below) and iOS, but you can’t use Norton Secure VPN on your games console, smart TV, Amazon Fire TV Stick or NAS drive, and you can’t set up a VPN connection manually with your login and server details.

Norton doesn’t offer any web browser extensions either, so you can’t use those as a workaround for the absence of split tunnelling.

If you have the single-connection subscription, beware that you need to log out of your account on a device before you can log in on another. This verges on a bug: you’d be unable to use the VPN on your Windows laptop at the airport if you were signed in (but not connected) to the app on your Android phone that you’d left at home.

Plus, as if that wasn’t annoying enough, the apps don’t remember your username and password so you have to type them in to log back in each time. Very frustrating.

Many people want a VPN to watch region-locked content. And it’s great to find that Norton Secure VPN allowed us to watch US Netflix from the UK. Not all VPNs can do this, and it’s a definite bonus.

It wouldn’t unblock BBC iPlayer, though, so if you’re heading abroad and plan to watch content that you can’t download first, you’ll find you can’t.

Norton does operate a no-logs policy which means no data which could identify your use of the service is kept. That’s good since Norton is based in the US, a less than ideal location for a VPN service due to the fact it can be told to hand over data by law.

But with no logs, there’s nothing to hand over. The only data stored is anonymous information necessary to maintain and improve the service.

Initially we were pleased to see that Norton offers live chat support. But you have to supply an email address, name and a phone number in order to start a chat. And support turned out to be fairly unhelpful as you can see from the conversation we had with one of the team:

The problem appears to be that staff do not have the specific knowledge about VPNs to answer anything other than the most basic questions, which are already answered by articles on Norton’s support website.

If it were still called Norton WiFi Security, we could probably forgive Secure VPN for quite a few of its drawbacks. And if you’re not paying extra for the service because you got it as part of Norton 360, then there’s not too much to complain about.

But it’s impossible to recommend Secure VPN over the likes of ExpressVPN, NordVPN and others when they have many more servers and features, have apps for more devices, and are based in more favourable jurisdictions and offer better support.