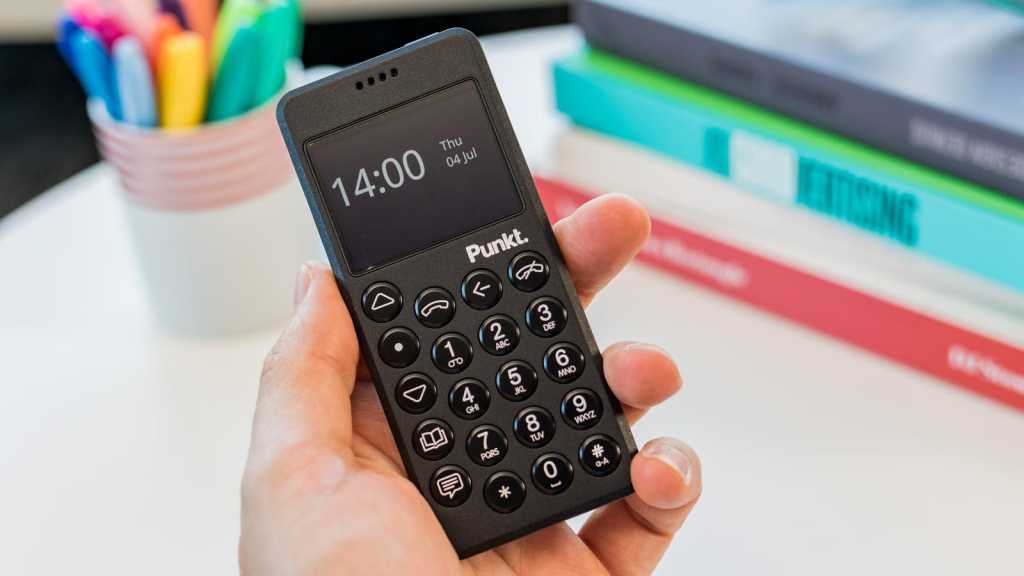 The MP02 should have been a triumph for luxury design and a fine example of digital minimalism. As it stands, it is a bug-ridden device that fails to function as advertised.  Its battery life bug is just the tip of the iceberg of software flaws. If it worked properly I’d recommend this phone to anyone who wanted to declutter their tech-addled brain. Punkt is such a small company that the promised software updates are delayed. Understandable, but it doesn’t change the fact that this is not a phone you should buy right now.

Punkt is a company with a vision. It thinks you use your smartphone too much, and it’s right – you do. This phone is designed to strip back all the unnecessary features of modern distracting smartphones to help you focus on work, life and wellbeing.

The Punkt MP01 was a luxury 2G dumbphone that brutally cut the cord and forced you to use a phone with no more technical function that a £10 Nokia from Argos. Now, the MP02 apes the design but updates it to a 4G phone – but it’s not a smartphone.

The MP02 is a good idea, and one that I subscribe to. The phone can make calls and texts but can’t access the web or download apps. The 4G function is purely for tethering so you can connect your tablet or laptop to the internet when needed, removing the urge to mindlessly check attention and mood sapping smartphone apps.

In principle, it is an idea that some people would love. It’s just a shame then that the promise of this expensive product is marred by the plethora of software and firmware bugs that often render it frustratingly limited rather than freeing.

The Punkt MP02 costs  £295 / $349 unlocked from Punkt, though at the time of writing it was out of stock. You can pre-order it for shipping in ‘mid-July’. The first batch sold out when it went on sale in October 2018.

You can have any colour as long it’s black, and you have a choice of American, European, UK, Australian or Japanese plug. Network compatibility serves most of Europe, Australia and Japan, but US compatibility is sparse. The company is working for AT&T and T-Mobile compatibility, but does not foresee it working on Verizon.

The phone is not unique in the market. It can make calls and send texts but its only 4G function is as a hotspot – you can also get this functionality from the Nokia 8110 4G that retails for £39.99.

That is a world away from the designer price £295 MP02. If you’re attracted to the ideal of the MP02 but balk at the price then you could save yourself £255 and get the Nokia.

Before the negatives, the positives. The most attractive thing aside from the MP02’s minimalist message is its hardware design. Think the playfulness of pop art but designed by a brutalist architect who only uses black and white. It’s an austere slab of a thing but has a reassuring weight; I love it.

The big simple buttons show that you’ll have to get used to T9 texting again, which I found even harder than I’d imagined. I’ll admit that some folk still prefer the physical QWERTY keyboard of a BlackBerry, but there’s no way that anyone can argue T9 is a good way to type.

Circular buttons are a rarity on modern phones, and to this writer’s eyes they look bold and confident and are the perfect level of clicky. They are set out to benefit a right hander’s thumb though, so as a leftie it was a tad awkward to use with one hand. There is obviously no camera.

This design decision is for a reason though – this is first and foremost a phone. I spoke to Punkt CEO Petter Neby at Mobile World Congress 2019 who told me that if someone wants to contact him, they can pick up the phone and call him, WhatsApp be damned.

The MP02 is designed to make you call people rather than awkwardly T9 text them. It is rooted in the company’s philosophy that you get more done in work and more said in life if you pick up the phone, and are unable to spend wasted time in attention-grabbing, non-productive apps.

I feel that while this approach is admirable, it is the mindset of any C-level executive who works from a laptop in offices and on planes and takes a lot of phone calls. In order for younger generations (and more junior workers) to use this phone, it requires a substantial sacrifice of modern technology – probably a good thing for your mental health of course, but it’s a big ask for those working across platforms and with social media.

The plastic of the phone is nicely textured and it has a rubber section on the rear that’s part of the wedge design. This is no accident, as on the rear at the top is a loudspeaker. Place the phone down and it creates an echo off a flat surface for loudspeaker calls. Sometimes, it’s the little things that spark a smile when using a product, and I truly admire the MP02’s simplicity and carefully thought out features.

Charging is via USB-C (top marks) and the power button is on the top. Punkt’s decision to employ renowned product designer Jasper Morrison here has clearly paid off, leaving us with a desirable piece of luxury tech.

Putting the fun into function

I buy into the Punkt philosophy (theoretically at least) so I chucked my 4G SIM in the phone and prepared to miss a whole load of WhatsApp messages for a week or two.

The phone is based on open source Android though you wouldn’t guess from the black and white interface and lack of apps. This is a menu based OS that gently asks “why are you even on your phone, mate?”

Things started off well. Of course I had to quash the really quite disconcerting urge to get my phone out my pocket to mindlessly scroll through something when I remembered all I can do is call or text. I went to check the bus times; no, can’t do that. But it’s fine, I’ll just wait at the stop. There’s no rush.

I called people I’d normally text to see when they were available, laughing down the line which is infinitely better than a couple of typed lols. Call quality is excellent, and I really loved that the thing I was holding was in that moment excelling at its main purpose: to get us all to chat a bit more and stop scrolling through endless timelines.

When testing the tethering function my laptop connected first time to the phone when set up as a hotspot – but getting it working at all is a faff due to the lack of touchscreen and unfamiliar numpad. I also struggled to work out without a manual how to type in a password into the Wi-Fi settings using T9 predictive (you have to connect the MP02 itself to Wi-Fi to import your Google contacts list or download updates).

There is a calendar function but it is not synced to the cloud. It’s just a simple view of months with the days of the week.

You also have to learn small things like pressing power and then enter to unlock. It’s a phone designed to make you admire its design yet also not want to use it that much, which is at loggerheads with its high price.

Even with the steep learning curve I was willing to accept the MP02’s limitations if it hinted at a clearer digital life by actually working properly. What a crying shame it is then that I cannot recommend this phone. I was willing to sing its praises if it functioned as advertised, despite that £295 price tag.

And that isn’t even all the specific little annoyances that are bugs in a phone that doesn’t have many features and started shipping in October 2018. Punkt is still taking orders for it and has thankfully said that it has extended its return period over the normal 30 days, so any customer can return their unit should they wish.

I’m not knocking the philosophy of the phone, but at this stage the poor execution is damaging. I fully understand that Punkt is a small company and that these fixes take many months to go through given the scale of unforeseen bugs and updates – but that doesn’t change the fact this is a phone that makes it hard to get on with despite its advertised simplicity and bold marketing.

Worst of all is the battery life. The phone should, Punkt told me, last for a week on a single charge. But there’s a bug where if you use the text messaging app a loop starts internally that continually runs the battery down in a day or two. I’ve used high-end smartphones with better battery life than the MP02 in its current state, which makes one of its attractive selling points void.

I want to have the phone on vibrate, but it’s broken so either I have a loud ringtone or I have it silent and miss calls. I receive texts, but the notification system doesn’t always show me the info on the home screen. I set up a hotspot but the phone auto-resets the password so I have to go back in and change it.

To me, that’s three huge red flags that strike at the core of the whole point of using the MP02 in the first place. Call vibrate doesn’t work, I can’t see texts come in and I can’t use it easily as a 4G hotspot. If Punkt can deliver the updates it is promising, I will update this review to take them into account. For now, it’s a huge risk to buy one.

The Punkt MP02 is what happens when a company has a wonderful idea but unfortunately fails to execute it. The phone looks like it belongs in the Design Museum such is the prowess of its hardware looks, but it is totally let down by software that renders it frustratingly far from what is advertised.

Simple task become chores, many features simply don’t work and the battery life bug means you might as well just not bother, unless Punkt can deliver the promised updates.

If Punkt fixes all (and I mean all) the bugs then I could recommend the phone. But as it stands, this is not a product you should buy despite its extremely attractive vision of making us all use our smartphones less and spending more time talking.