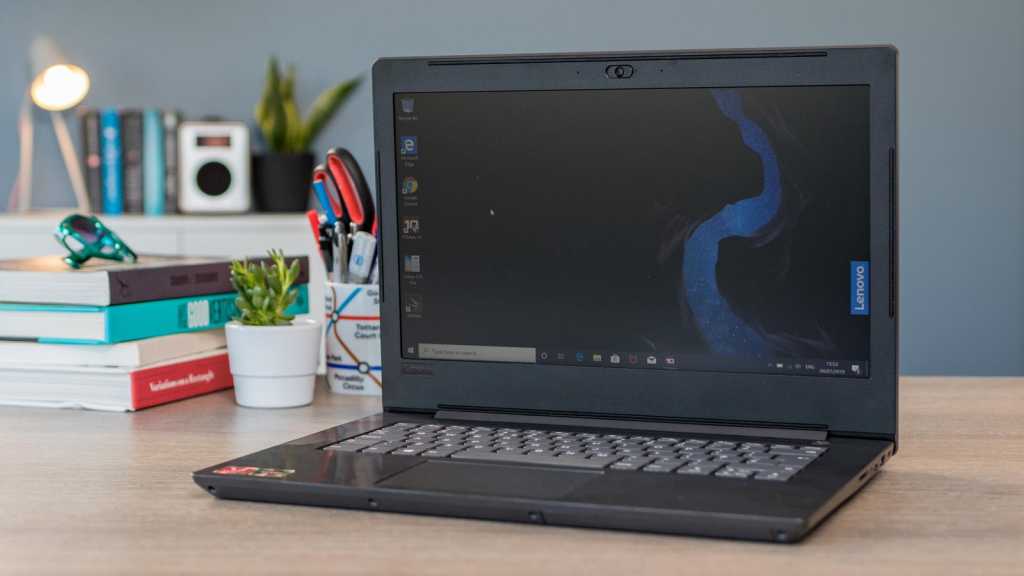 Lenovo might have gone for a pretty boring and slightly flimsy design here, but the specs of the V330 are shockingly good. You get a decent processor and other core specs including the unlikely addition of a Radeon graphics card. This is an unapologetically no-frills work machine but is let down by a poor screen and short battery life.

The Lenovo V330-14ARR is a budget laptop with Windows 10 Home that packs performance into an unappealing chassis. You’ll be surprised and the specs hidden underneath the somewhat ugly exterior here, but this makes it a great value purchase if you’re not fussed about style.

This is fairly unusual as a budget laptop typically has low-grade components masked by a shiny or colourful exterior. Lenovo has bucked this trend and actually spent money on parts that make a difference, although the budget seems to have run out when it comes to the display.

The Lenovo V330-14ARR is available from eBuyer with 8GB RAM for £399.98, though there’s currently a £50 off promotion making it something of a bargain.

There are versions of the V330 available in the US, though not the same model we reviewed. You can find one with a fingerprint scanner on Newegg for US$625. There’s also a version on Amazon US for $464.

See our full round up of the best budget laptops for more options in this price range.

There’s no way around it: the Lenovo V330 is pretty ugly. If you’re after a sleek and minimalist aesthetic, the V330 won’t impress. It’s a compact and chunky block best suited for office work.

The brushed metal finish on the exterior and keyboard area offers a pleasant lift from the otherwise severe design – but it’s easy to lose sight of this accent when thick, cheap plastic bezels suffocate the screen. The bottom bezel spans more than an inch and yet only houses a small Lenovo logo to one side. Otherwise, the V330 offers a sturdy frame with a hinge that pivots 180-degrees.

What is useful is the cover on the webcam, which further cements the laptop as an office PC ideal for IT, finance, or government professionals, for example, who would prioritize privacy.

For added security, V330 comes with a security lock slot. There are models available with a fingerprint scanner too, though the one we reviewed did not have one.

At 20mm thick and 1.8kg, the V330’s chunkiness adds weight, and in our experience we preferred carrying it in a backpack instead of a laptop satchel, which strained our shoulders (though we can also fault the weight of the bag here).

The chiclet keyboard is compact, without much space between keys, though the keys themselves are large with smooth, rounded edges. This lends some relief to the otherwise blockish look and feel. If you press the keys hard enough though, the plastic beneath the keys does buckle slightly, which serves as a visceral reminder of the laptop’s budget price range.

The compact keyboard also forces your wrists close together, but this is something that’s easy to adapt to over a few days of use. There isn’t a numeric keypad, which some users may find more restricting, especially if you work with numbers on a daily basis.

The trackpad offers a decent amount of space, but it doesn’t allow two-finger right-clicks. You can right-click by physically pressing down the trackpad, though somewhat forcefully. A separate Bluetooth mouse is an easy fix to limited keyboard space, but this means you would have to work at a desk or table. Conversely, the compactness could be a strong benefit for commuters.

The V330 offers a 14in Full HD display, and though that may sound inviting, there are issue here which are the laptop’s biggest downfall.

Colours look dull and lack contrast, and the screen is dim, even at maximum brightness – just 180cdm/2 when a decent laptop is around 300 or more. This means we found our eyes straining after a couple hours of writing and browsing, though this may vary from person to person.

The V330’s matte screen does offers anti-glare protection though, and the dimness may not be an issue if you’re working overnight on a flight for instance but we’re looking on the bright side there – if you’ll excuse the pun.

The fact is, this is not a display to do long hours with comfortably.

The battery lasted nearly four hours in our test where we loop a 720p video at a screen brightness of 120cd/m2 (that’s an above average 80% percent in this case). With most laptops getting around 8-10 hours, this is a fairly poor result.

However the V330 does accommodates a second battery (not included), which which is a handy feature in a budget laptop. If you’re going to be on the go with this device then it could be worth the investment.

The V330 we reviewed has 6GB RAM, a 128GB SSD and an AMD Ryzen 5 2500U processor, though the model available from retailers offers even more memory, at 8GB.

The V330 is fast. We used the laptop mostly for web browsing and word processing and the experience was seamless. Programs take seconds to fire up and you can begin working right away.

According to our Geekbench 4 multi-core tests, the V330’s processor is slightly faster than the more expensive HP Spectre Folio 2-in-1 laptop (at a whopping £1,499 RRP), and it outdoes both the HP Spectre Folio and Huawei MateBook 13 (from £899 RRP) in overall performance.

With a low resolution screen and the unusual inclusion of a dedicated graphics card, the V300 is also impressive when it comes to graphics. Normally you’d expect an integrated GPU which is part of the processor but here we have an AMD Radeon Vega 8. As you can see below it outpaces seriously expensive laptops in 3D Mark.

Remember the screen is low-grade though so there’s catch here. You pay less for a laptop with a better performance than some premium machines; but the premium laptops are lighter and thinner with much better displays.

While the V330 does a decent job handling graphics given it is a budget laptop, we wouldn’t recommend it for creative work like video or photo editing and design, due to the quality of the display.

You could possibly get away with gaming on this laptop if you are looking for a multi-purpose budget laptop, but again, the display quality coupled with the four-hour battery life is not optimal if you truly want an immersive experience. See our round up of the best gaming laptops instead.

In terms of connectivity, the V330 offers the following ports: USB 3.0 (two), USB-C 3.1, HDMI, Ethernet, and VGA. It also has a card reader and headphone audio jack. In terms of wireless, you get Wi-Fi and Bluetooth 4.1 connectivity.

The Lenovo V330-14ARR is unapologetically a no-frills work machine. You get a fast, responsive machine that excels in tasks like word processing and browsing. Despite its speed, its weakness lies in a dull display that’s best suited for text and numbers (think spreadsheets), not graphics or videos.

It’s also not the nicest looking laptop, though this may not be a deal breaker for those simply looking for a reliable office laptop, which the V330 is. Its design may be brutish, but it’s compact which poses a major benefit for commuters in packed spaces.