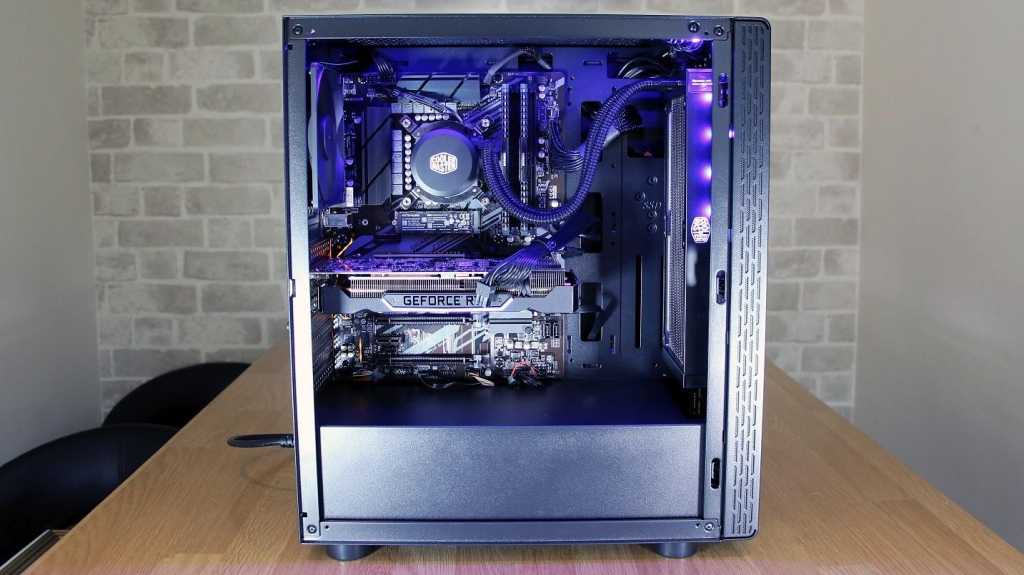 This PC Specialist system deploys an RTX 2070 to offer rival-beating gaming performance at 1080p and 1440p – and it’ll handle VR headsets and high refresh-rate screens, too. Elsewhere, the Core i7 CPU is reliably quick, the rest of the components are fine, and the case is compact and smart. It’s not the best for upgrades, but this rig is impressively quick and affordable.

The PC Specialist Vulcan S2 is a superb gaming system on paper, with better components and a lower price than its main rival. But have corners been cut in order to bring this system in under budget, or is a true mid-range marvel that can handle 1440p gaming for less cash than the competition?

This £1,394 machine is built around two key components: an Intel Core i7-9700 processor and an Nvidia GeForce RTX 2070 graphics card. You’ll need to buy it direct from PC Specialist.

That’s a lot of power for this price, and it squares up well against its key rival. The Overclockers Hoplite originally arrived at £1,479, but now it costs £1,299 – so it’s £100 cheaper than the PC Specialist machine. That rig relies on an AMD Ryzen 7 2700X CPU and RTX 2060 graphics.

The Vulcan S2 is protected by the standard PC Specialist deal, which is a three-year labour deal with one year of parts protection and one month of collection coverage.

PC Specialist has used one of its own enclosures for this machine. It’s called the PCS P209, and it nails most of the current trends. There’s a tempered glass side panel, a magnetic dust filter on top, and a slab of metal at the front.

It looks like loads of other recent cases – including the Kolink Phalanx RGB used by the Overclockers Hoplite. That PC’s enclosure also has a tempered glass side panel and a dust filter in the roof, but its front-mounted trio of RGB LED fans are more eye-catching.

The P209 is 455mm tall and 390mm deep, so it’s smaller than the Kolink – that unit is 510mm talk and 445mm deep. That bodes well for fitting the Vulcan into smaller spaces. Build quality is impressive, too – the steel used throughout is sturdy, so we have no concerns there.

There are slim air intake vents at the front, and at the rear there’s a 120mm exhaust. Air intake is handled by two 120mm fans that are attached to the Cooler Master MasterLiquid Lite 240 processor cooler. That’s a slight concern – because it means that cool air coming in will immediately be heated. This shouldn’t be a huge problem due to the Vulcan’s mid-range components, but the Overclockers is better-equipped due to its trio of intake fans.

The top of the P209 only has two USB 2.0 ports and one USB 3.0 connection – there’s no faster USB 3.1 port. It’s the same as the Kolink case, but it’s not particularly good for fast data transfers.

On the inside the P209 remains conventional. A PSU shroud hides the Corsair power supply, and PC Specialist has done a good job of keeping cables neat – so airflow isn’t disrupted and internal access is easy. Lighting is handled by a patterned strip of RGB LEDs down the front panel and a strip of lights to illuminate the hardware inside.

However, in some areas the P209 is basic. Behind the motherboard there’s only room to add single 2.5- and 3.5in hard disks, and the hard disk option is poor – there’s no dedicated bay and no tool-free installation.

The Vulcan’s case is smart, sturdy, small and accessible, and it has RGB LEDs. But it doesn’t have the best port selection, and the slightly cheaper Overclockers has more room to grow – as well as more extravagant design.

The Nvidia GeForce RTX 2070 sits in the middle of Nvidia’s latest range. It uses the Turing architecture, which means you get the latest architectural improvements – as well as ray-tracing and DLSS.

The Vulcan’s RTX 2070 is made by Palit, and it uses the GPU’s stock configuration with no overclocking. That means you get 2,304 stream processors, 8GB of memory and a boost clock of 1,620MHz.

The lack of overclocking doesn’t stop the RTX 2070 outstripping the cheaper Overclockers’ RTX 2060. The Gigabyte-made card in that machine has a small overclock, with the 1,680MHz standard turbo speed improved to 1,770MHz, but that GPU only has 1,920 stream processors and 6GB of memory.

Unsurprisingly, the RTX 2070 was better in our benchmarks. Its Sky Diver result of 44,637 is more than 1,000 points ahead of the Hoplite. The PC Specialist handled Total War: Warhammer 2 at 1080p and Ultra settings at 152fps – five frames ahead of the Hoplite. At Ultra the Vulcan ran at 91fps – a four-frame advantage.

In the tougher Ghost Recon: Wildlands, at 1080p and at Ultra settings, the Vulcan still blasted through with an average of 65fps – easily playable.

The Vulcan played games at 1440p, too: in Warhammer and Ghost Recon at maximum settings it averaged 62- and 51fps respectively.

The RTX 2070 can’t handle 4K, though. It only managed good framerates at Medium settings – at Ultra, in both games, minimum framerates dipped below 30fps. You’re either going to get stuttering gameplay or you’ll have to drop the quality levels, and neither is ideal.

This isn’t the PC for 4K gaming then, but it does have enough grunt for other situations. It’ll play 1080p and 1440p titles, esports games, content on high refresh-rate monitors, VR headsets and widescreens with minimal graphical tweaks. It’ll handle ray-tracing, and it’ll cope with of these situations with more ability than the Hoplite’s RTX 2060 – and for longer into the future.

You can see benchmark results below compared with the Hoplite and also the  Yoyotech Warbird i7s which also has an RTX 2070.

Both CPUs are fast and versatile, with enough pace for day-to-day work and for gaming. Drill down, though, and those benchmark results create some real-world differences.

The PC Specialist’s Intel chip is better for gaming and for tasks that require single-threaded speed, like mainstream office applications – so it’s well-suited to a wider range of day-to-day tasks. The AMD part will be better in more complicated productivity software, like video tools and photo editing suites, but that’s it.

Elsewhere, the two machines are similar. Both have 16GB of memory at 3,000MHz or beyond – so that’s fine. The PC Specialist has a 512GB Intel 760p SSD, while the Overclockers has a 240GB Gigabyte drive. The former is faster and larger, but neither are bad. Both have secondary 2TB hard disks.

The Vulcan’s Gigabyte Z390 UD motherboard is basic. It has entry-level audio and wired networking – fine for day-to-day use, but nothing special. The cost had to be kept down somehow.

Elsewhere, there are two free memory slots, space for SATA-based storage and plenty of vacant PCI-E x1 slots for smaller expansion cards, but it doesn’t support Nvidia SLI so you can’t add a second graphics card if you were thinking about doing so.

The sole M.2 connector is occupied, the on-board USB 3.1 header uses the slower Gen 1 standard, and at the back there’s no USB 3.1 Gen 2 connectivity and no USB Type-C either.

The Gigabyte board inside the cheaper Overclockers has many of the same limitations: no practical dual-graphics, no USB Type-C and entry-level audio and networking. However, it does have two M.2 connectors and more audio jacks.

The PC Specialist had no thermal issues during our testing. The CPU and GPU peaked with normal temperatures of 70- and 59°C – so the potentially problematic air intake wasn’t an issue. The noise was fine, too: the Vulcan produced a low rumble during gaming and work, but it’s easy enough to mask with modest speakers.

There are a couple of areas where the PC Specialist can’t match the cheaper Overclockers machine: that rig is more accommodating for upgrading, and its multi-threaded CPU is better for some work tasks. And, if you don’t want to push your gaming to higher levels, that RTX 2060 machine does the job for less cash

In every other department, though, the £1,399 PC Specialist Vulcan S2 outpaces its £1,299 rival and justifies the extra cost. It’s quicker in gaming and faster in all applications and scenarios beyond some tough work tools. It’s got better storage, and it’s cool, quiet and more compact than its rival.