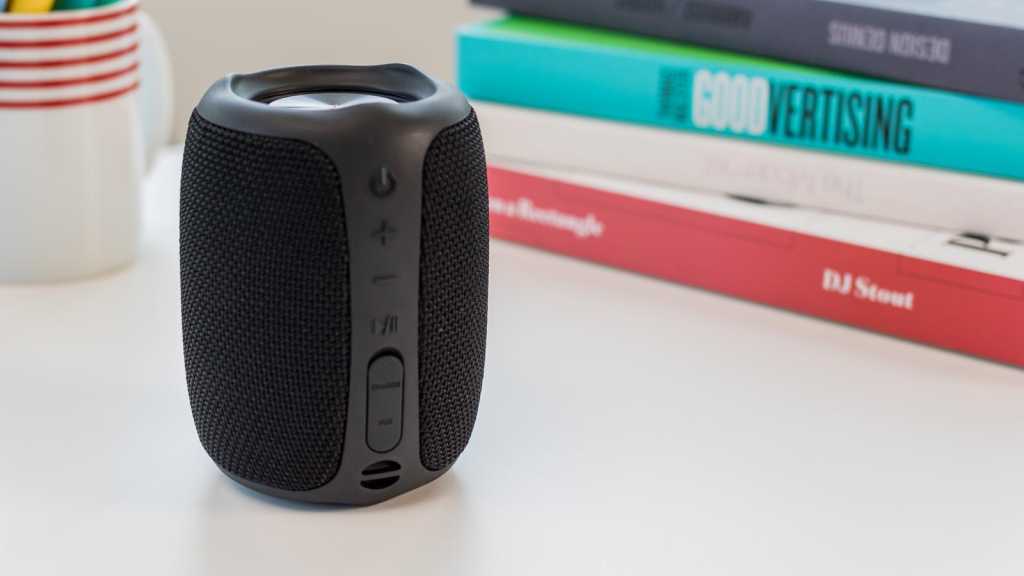 There’s little to dislike about the Muvo Play which provides what most people will be looking for in a cheap Bluetooth speaker. It’s compact, easy to use, has waterproofing and sounds pretty decent. You can also do things like pair two together if you wish

Creative is a long standing and reliable audio brand in the UK. Its latest product, the Muvo Play, aims to provide all the functionality of a solid Bluetooth speaker into as compact a package as possible. It’s also cheap, too.

It can be tough to stand out with such fierce competition at this price point. The likes of Anker, Logitech and Aukey all produce impressive cheap Bluetooth speakers. Those looking for the optimum sound quality will want to step up to the best in class, but given the name, the Muvo Play is clearly targeted at everyday consumers.

The Muvo Play is among the smallest and cheapest Bluetooth speakers Creative makes at just £34.99. It’s available to purchase from the company’s website now.

This makes it one of the most affordable speakers on the market right now, but there is stiff competition in the budget sphere. The Lava BrightSounds 2 has a similar feature set and is now available for £29.99, while Creative’s own Nuno speaker also retails for less than £30. 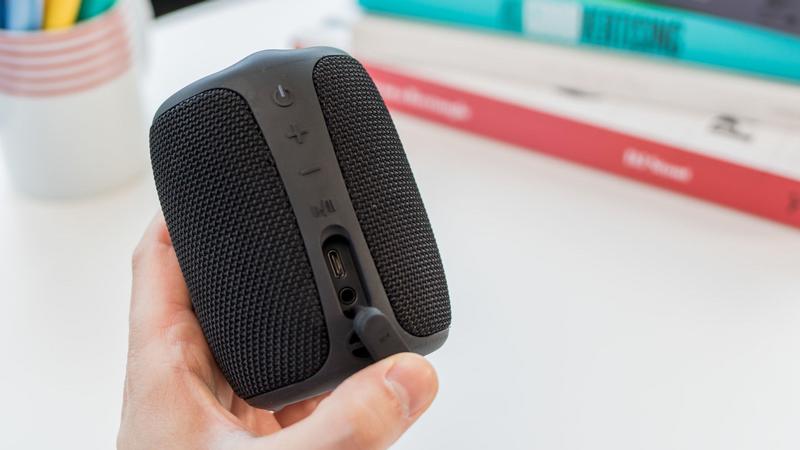 The Muvo Play’s pint-sized design makes it perfect for travelling. At just 360g, it’s perfect to throw in a bag or attach to luggage using the included string lanyard.

The fabric design is reminiscent of Amazon’s latest Echo devices, and it means the speaker provides almost 360° audio. The metal chassis is complemented a rubber exterior and passive bass radiators at either end.

This clean and simple design extends to the front of the device, where tactile controls include a power button that doubles as an LED indicator. This is red when charging, flashing blue when pairing, and solid blue when on and connected.

The USB-C charging and AUX ports are cleverly housed under a removable panel, meaning the clean aesthetic is maintained throughout.

Despite being fairly lightweight, the Muvo Play feels premium in the hand, and could easily be mistaken for a more expensive setup.

The speaker is available in three dynamic colours. We tested the black version, but opt for the blue or orange variants if you prefer a more distinctive design.

Considering its price, the Muvo Play does everything you’d expect from a budget Bluetooth speaker, with an easy setup procedure, simple controls and great portability. A simple press and hold of the power button will turn on the device and it will immediately start searching for devices. A three-second press will put it into pairing mode should it already be on.

Our only real gripe was the voice guidance and sound effects that were present every time we used the device. If they get annoying you can switch them off by holding down both volume buttons at the same time.

One of the speaker’s main selling points is its water resistance, illustrated on the box as it is immersed in water. The IPX7 rating allows it to be submerged in up to 1m of water for up to thirty minutes. While the speaker still worked fine for us after getting wet, its design means it was awkward to dry and the mesh exterior remained damp for a long time. It’s nice to have the water resistance there for peace of mind, but we wouldn’t recommend giving it a regular dunk. 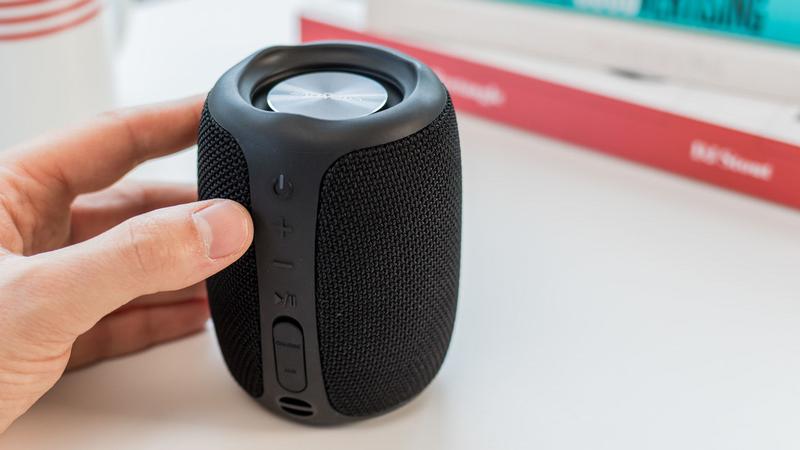 Creative has also included the option to pair devices for a stereo speaker setup. If you pick up another Muvo Play, both devices can simultaneously output audio thanks to the included Bluetooth 5, which also enables faster performance and a more robust signal than predecessor 4.2. This works well and perhaps makes sense considering the speaker’s affordability.

Creative claims the Muvo Play will still work up to 10m away, and in our testing we found this to be pretty accurate. This product is clearly aimed at social events, so your phone is unlikely to ever be that away from the speaker when shuffling through playlists.

It also features a handy AUX port if you ever need a wired connection, although it would have been nice to see a 3.5mm jack cable included in the box.

This means you are relying on the Muvo Play’s battery life, which Creative claims will last up to 10 hours at medium volume. In our testing, a solid hour of continuous music playback only depleted the battery by 10%, which is consistent with Creative’s claims.

Charging is via industry standard USB-C, which is good news if you’re looking to minimise the number of cables you own. However, it only supports 5W input, meaning the 2000mAh cell takes a significant amount of time to get to 100% (it does at least come fully charged out of the box though!).

If you plan on spending considerable time away from a wall outlet, we’d recommend taking a power bank with you, to keep the Muvo Play juiced on your travels. Unfortunately, Creative’s companion mobile application only works with their more expensive speakers. It would have been a nice touch to have been able to control the device remotely from your phone, but it’s a compromise we’re willing to make.

All things considered, the Muvo Play offers excellent sound quality for the price. It has two 5W full-range drivers and those easy to see passive bass radiators mentioned earlier.

Vocals are crisp and clear, even at high volumes, while the room-filling audio in such a compact package means it comes into its own at social gatherings.

Chart-topping hits such as Camila Cabello’s ‘Havana’ and Drake’s ‘God’s Plan’ sound rich and dramatic, but the Muvo Play has a tougher time with slow classics such as ‘Purple Rain’, where Prince’s vocals sound a little washed out.

On James Blake’s ‘Limit to your Love’, a track known for its heavy sub-bass, the Muvo Play struggled to adapt to the constantly changing tones but generally performed adequately. A frequency range of 70Hz – 20kHz means it can’t get down to lower bass range. 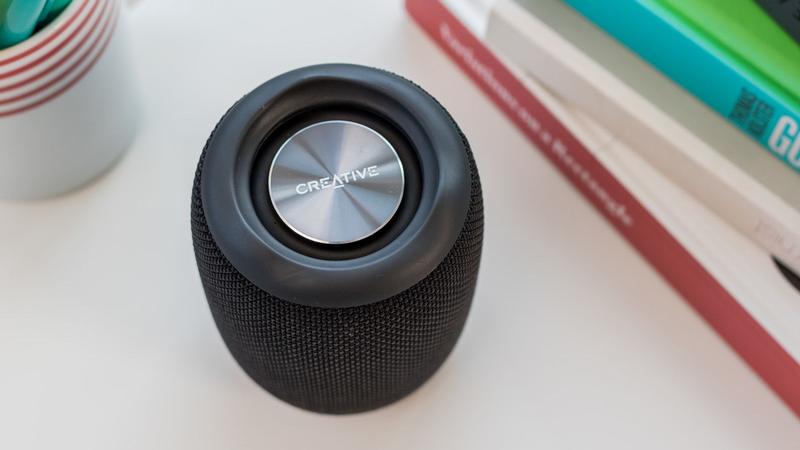 The Muvo Play is particularly adept when it comes to speech, so podcasts sound great. In some cases, pairing a couple of these speakers could even enhance the audio compared with what you’d normally expect from your laptop or TV, and their attractive aesthetic means they won’t look out of place.

It’s easy to point out what the Muvo Play lacks in comparison to more expensive speakers, but that would be a pointless exercise.

It focuses on the basics of what a Bluetooth speaker should provide and delivers admirably, with a sleek design, simple controls and a solid audio experience.

Consumers have plenty of choice in this market, but the Muvo Play has made a compelling case for it to be your budget Bluetooth speaker of choice.