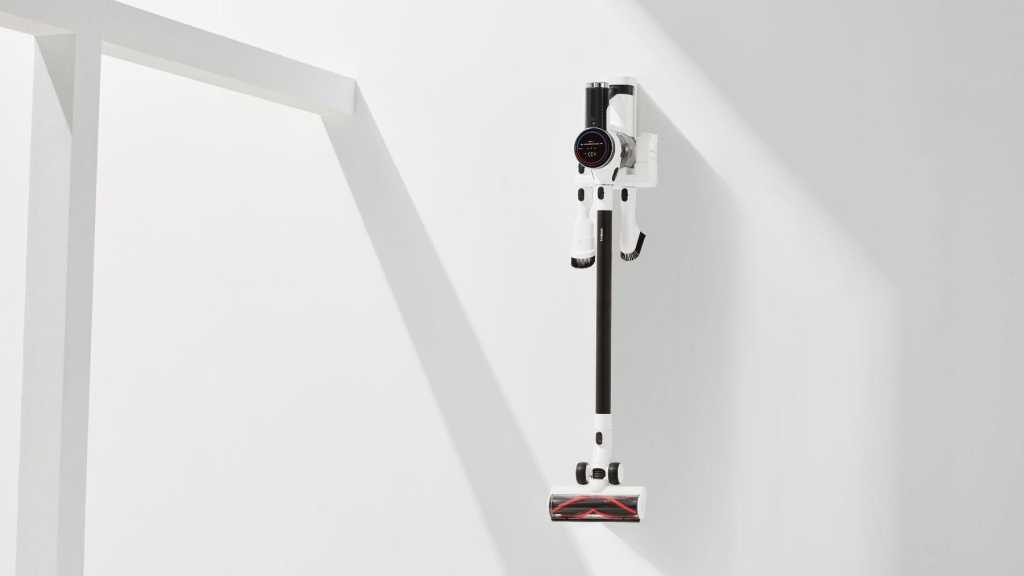 The Tineco Pure One S12 is a new favourite of ours, offering a combination of a sleek design, lightweight body a range of easy-to-swap accessories that make cleaning the home a breeze. There’s a large circular display that, thanks to the iLoop system, can tell you just how clean the surface is and will even adjust suction based on that information. It’s amongst the smartest vacuum cleaners we’ve seen, doing everything it should and more.

Tineco is a relatively new name in the vacuum cleaner world, as the brand was only established in 2018. But with the support of parent company Ecovacs Robotics Group, which has over 20 years of vacuum cleaner R&D under its belt, Tineco looks to offer something unique in a market filled with similar portable vacuum cleaners.

That something is the Pure One S12, a new smart vacuum cleaner that boasts onboard AI that automatically adjusts suction based on the amount of dust present. It’s an intriguing concept, but has Tineco managed to pull it off? We’ve been cleaning our home with the Tineco Pure One S12 for quite some time, and here’s what we think of the high-tech vac.

The Tineco Pure One S12 smart vacuum cleaner is available to buy in the US right now via Amazon for $429. This is less of an outlay than the top rung vacuum cleaners like the Dyson V11 Absolute, which makes this great little vacuum cleaner even more of a tempting buy.

When we first wrote this review, the Pure One S12 had not yet made its way to the UK. But we have good news: you can now buy it from Amazon for £469. Like its US price point, this slots comfortably under the pricey likes of Dyson.

The Tineco Pure One S12, like many other battery-powered vacs available in 2019, is modular in nature. It sports a sleek black and white design, it’s lightweight at around 1.6kg and comes with a range of accessories that can be easily swapped out thanks to the simple press-and-click system the Pure One S12 offers.

Like the Dyson range, the Pure One S12 features trigger activation. It’s a great addition, and one that can help save battery life when you’re not actively vacuuming your home. Tineco’s offering differs from Dyson’s range by also including a lock that’ll keep the vacuum on without having to hold the trigger down – very handy for those that need it. 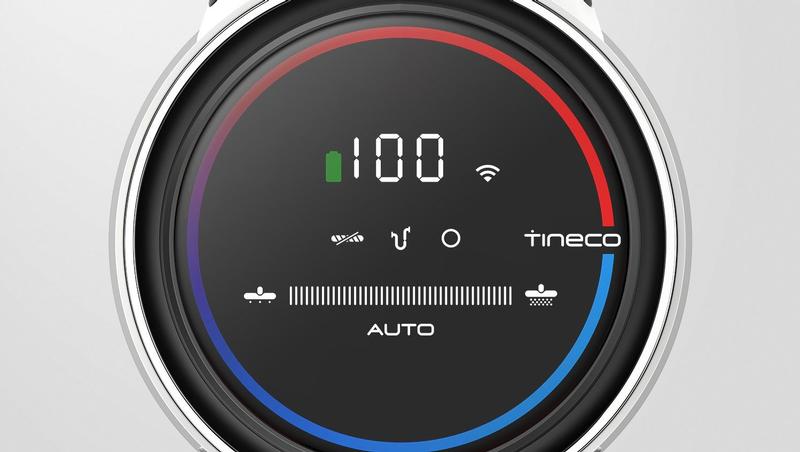 But while the trigger is handy, the real highlight of the Pure One S12 is the large circular display mounted onto the main unit. The large, bright colour display provides a plethora of information including current suction power, battery life and an innovative dust monitoring loop that goes from red to blue as you hoover an area to indicate how much debris and dirt is being detected – but that’s something we’ll go into in more detail later.

The Pure One S12 offers a removable battery system opposed to a built-in battery, which brings a variety of benefits. Firstly, and most importantly, you can swap the battery out for a second (fully charged) battery when the first runs out, extending usage to around 100 minutes on auto mode. It also means that as the batteries degrade over time, you’ll be able to buy new batteries instead of an entirely new vacuum cleaner.

The only issue for those that want to buy the Pure One S12 in the UK is that it ships with a US plug, so you’ll have to pick up a US-to-UK adaptor to charge the batteries. 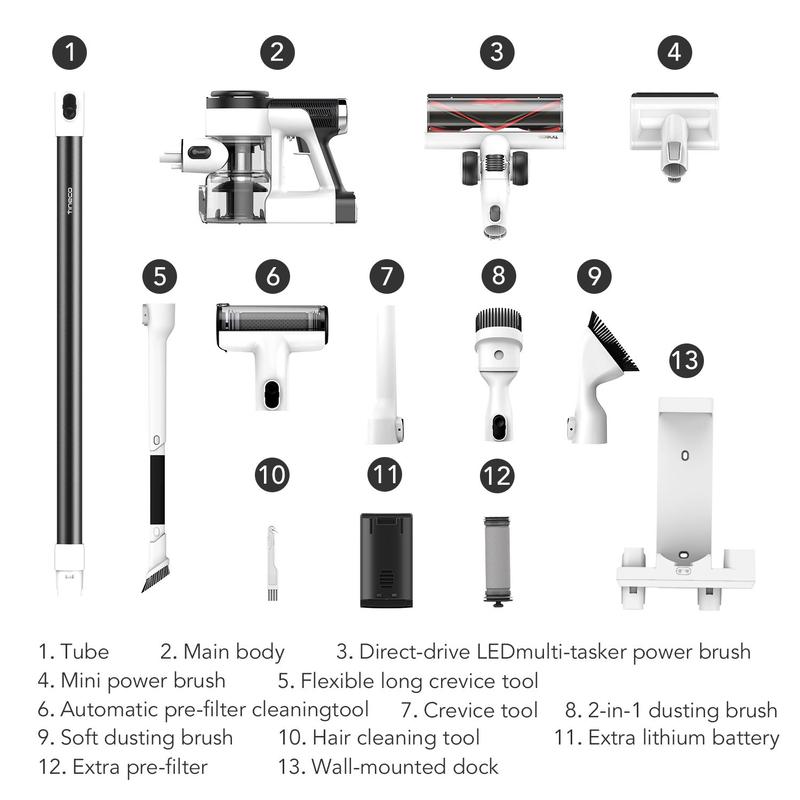 While the modular design of the Pure One S12 – bar the display – is fairly common amongst portable vacs, what differs is the number of accessories that you get in the box. The variety of heads and pipes included in the box makes the Pure One S12 a versatile bit of kit without having to fork out on additional accessories. With the standard model, you’ll get the following:

As well as the above accessories, the Pure One S12 comes with a handy wall-mounted dock that as provides not only a place to dock the vacuum when not in use, but storage for most accessories too, allowing you to keep the vac, batteries and accessories in one easy-to-reach place.

As touched upon above, the direct-Drive LED multi-tasker power brush is the main tool, providing a single head for both hardwood and carpeted surfaces. The brush is motorised to really drum down into carpets and help get ingrained dirt out. In fact, it’s so powerful that when combined with 150W of suction power, you can see lines akin to a freshly mown lawn on thicker carpets.

The head also sports a swivel joint that makes it easy to use and turn to navigate around large obstacles in your home. Oh, and there’s also an automatic LED light mounted onto the front of the brush head that lights up dark areas. 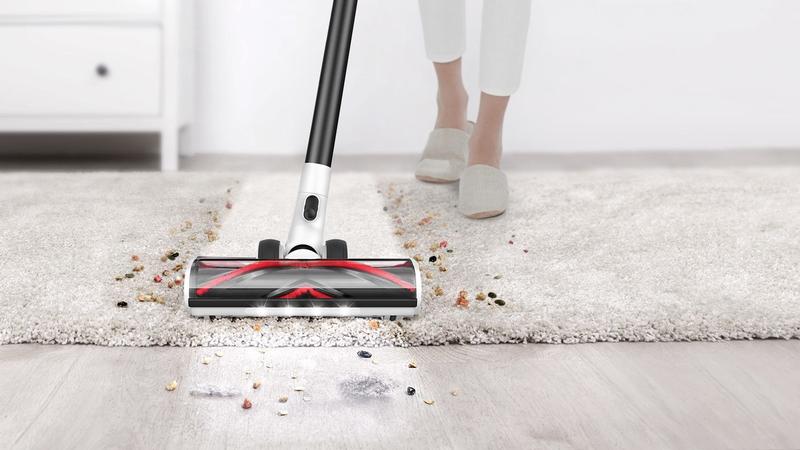 But while the head can help remove dust and debris, it’s the automatic cleaning mode that really steals the show. The auto cleaning mode utilises the Pure One S12’s iLoop system and built-in AI to adjust the suction power based on not only the type of floor, but the amount of dust and debris detected too – and it works surprisingly well most of the time.

As you’d expect, more power is delivered when large amounts of dust and debris are detected, although we did notice that when hoovering larger debris (like stray cat biscuits), some remnants were left untouched when on the vacuum’s automatic mode. It’s only by switching to manual (with a simple swipe of the touch panel) and turning the power up to the max that the vacuum could then pick up the larger remnants.

While that’s not perfect, we must stress that the automatic mode did a great job most of the time during our testing – it just doesn’t do well with larger objects.

The Pure One S12 is also noticeably quieter than a traditional vacuum cleaner, and as the owner of a German Shepherd that hates the sound of vacuum cleaners, it’s a huge plus. It’s not silent, with a maximum of 71dB(A) when on max power, but it means that we can at least hoover other rooms in the house without the dog barking! 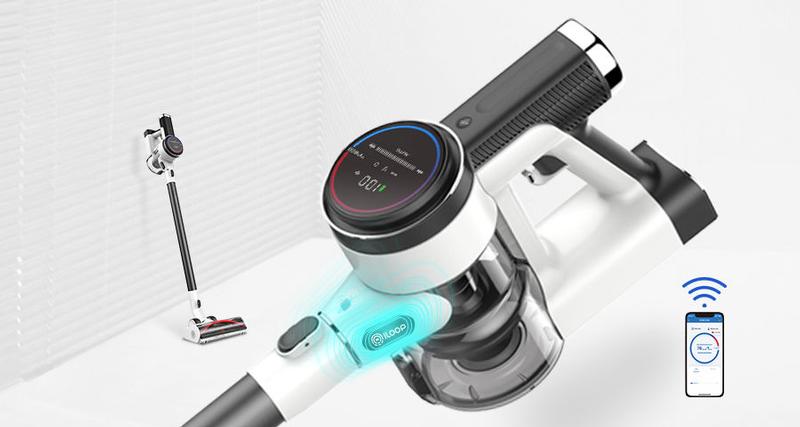 The 0.6L bin is standard for a portable vac of this size, but it’s still a bit on the small side for the big cleaning jobs. We’ve also noticed that it’s not great at detecting when the bin is full, and on one occasion (when I admittedly forgot to empty the bin previously) I had to remove fluff and debris from not only the bin but the connecting pipe after not being notified of the bin status or blockage.

The auto mode isn’t just great at cleaning the floor – the variable power of the mode translates to great battery life, squeezing around 50 minutes per 2,500mAh battery, although that does drop down to just 15 minutes if you crank it to max power. Whatever you decide to do, the great thing about the Pure One S12 is that it comes with two batteries, allowing you to switch them out when one dies. That extends use to around 100 minutes across both batteries, which should be more than enough for even large homes.

The Pure One S12 is also Wi-Fi-enabled, allowing you to connect to the vacuum and check the battery status, power, alerts of potential blockages and more. While it’s cool to say that your vacuum cleaner has an app, we do think that the appeal is slightly limited as most, if not all functions, are accessible via that gorgeous circular display – but it’s there for those that want it. 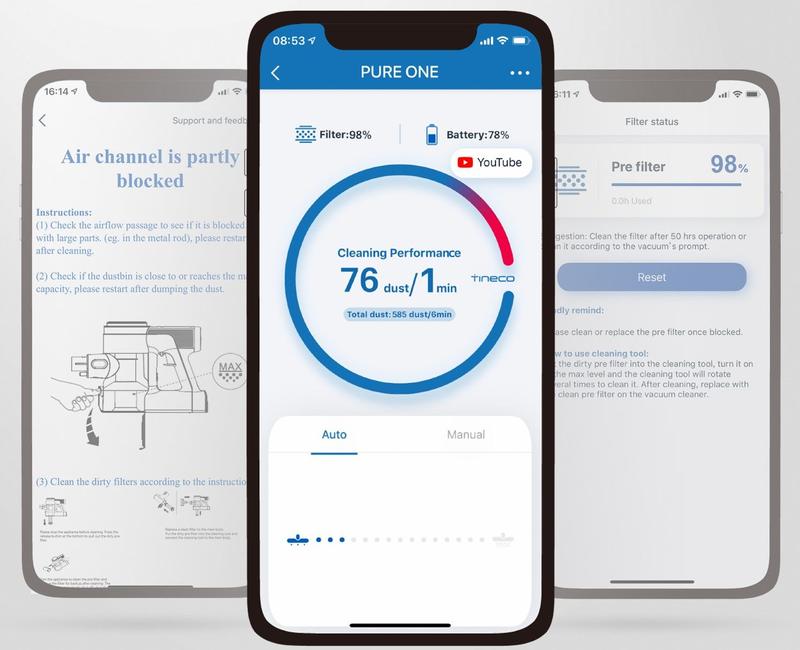 The Tineco Pure One S12 is one of the best portable vacuum cleaners we’ve used. It features a sleek design, lightweight body and boasts a range of accessories that are easy to swap between thanks to the simple press-and-click attachment system. The trigger activation is a great addition, allowing you to easily turn the vac off and on mid-clean to save battery life where you can, and there’s also a lock for those that don’t get on with it.

But, of course, it’s the cleaning performance that truly matters, and we’re happy to say that the Pure One S12 generally excels in that department too. The motorised brush head is compatible with both carpet and hardwood floors, helping to get up ingrained dirt and hairs, but that’s not the best feature.

The Pure One S12 comes with an iLoop system that intelligently analyses how much dirt and dust is being picked up and automatically adjusts suction power. It saves battery life and allows the vacuum cleaner to operate at relatively low volumes most of the time.

With two batteries offering a combined 100 minutes of use during auto mode, it should be more than enough to clean most homes, and the accessories allow you to tackle just about any environment, from behind the fridge to the car. All in all, the Pure One S12 is an amazing bit of kit and something we recommend to those in the market for a high-end smart vacuum cleaner.