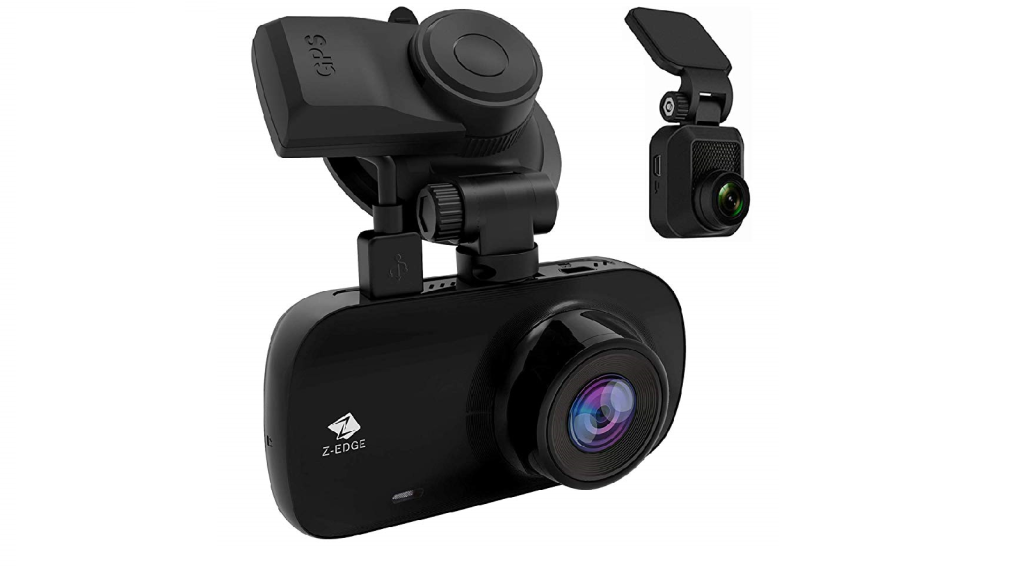 If you’re on the market for a dash cam that doesn’t break the bank, the Z-Edge Z3D system is a decent option – especially with premium features like built-in GPS and separate cameras for recording the front and rear of the car.

Z-Edge is well-known in the dash cam community, offering a wide range of dash cams that suit every budget. The company’s latest offering is set to shake things up, as the GPS-enabled two-camera Z3D dash cam system costs less than £100, making it one of the cheapest of its kind in the UK.

The question is, does the budget price tag reflect the performance of the camera? We’ve been driving around with the Z3D dash cam system, and here’s what we think. If you’re looking for more dash cam inspiration, take a look at our curated list of the best dash cams.

The Z-Edge Z3D dash cam can be picked up for £99.99 from Amazon in the UK and around $150 from Amazon and Walmart in the US, which is surprising when you consider the dual-cam nature of the dash cam setup.

For comparison, the DDPai X2 Pro offers a two-camera setup and costs over £200 in the UK, although it does admittedly have smartphone compatibility. Still, though, it makes the Z3D one of the cheapest two-camera systems on the market in 2019.

The Z-Edge Z3D is a fairly standard-looking dash cam, with a black plastic body, curved edges that give it a sleek look and a 2.7in colour display. The bright display gives you a preview of both the front- and rear-facing cameras at the same time, allowing you to correctly position the cameras and easily check on them with a glance from time-to-time.

It can be a little distracting when driving, but the good news is that the display turns off after a couple of minutes with no interaction.

The Z3D kit offers dual recording capabilities, but unlike other dash cams on the market that integrate two cameras into a single unit, the Z3D system is comprised of a ‘main’ front-facing camera and a smaller rear-facing camera that is attached to your rear window and connected to the primary dash cam via USB.

You’ll also find built-in GPS for positional data and speed detection, a bonus for a dual camera system at this price point, along with a G-sensor to detect impacts.

Both cameras sport an impressive 150-degree wide-angle, allowing both cameras to cover traditional dash cam blindspots, and there’s no noticeable distortion either – something found in many budget wide-angle cameras. There’s also a focus on low-light performance with an f/2.0 aperture, although not exactly the most impressive we’ve ever seen – but more on that later.

Installation of the system is simple enough, as all you need (including an 8m cable to run from the rear to front of your car and cable tidies) are included in the box. But while the cameras are easy to attach to the front and rear windows of the car, the cabling proved slightly more time-consuming.

You’re provided with a number of cable grips, which can be attached to glass and other materials to keep cables tidy and to stop the setup from looking messy – a great idea in theory. However, the cable that connects the cameras is noticeably thick and weighty, and the cable grips simply don’t have the strength to hold them in place.

In our experience the cable clips detach from the surface they’ve been stuck to, whether it’s glass or material, making the whole setup look noticeably messier. If you’re considering the Z3D, we’d recommend either opting for a thinner USB cable or cable clips with better adhesive.

Of course, you could always decide to only use one of the cameras, but that kind of defeats the purpose of buying a dual-recording dash cam right?

The Z3D doesn’t have Wi-Fi or Bluetooth capabilities so you’ll have to remove the camera (or microSD card) from the car and plug it into your PC or Mac to view footage and other captured data, but that’s not uncommon for a dash cam at this price point.

The good news is that Z-Edge has its own proprietary software for both Mac and PC that displays the recording alongside an interactive map showing your location and a speedo displaying speed stats in both mph and km/h. It’s admittedly a largely clunky experience, but it does the job of allowing you to review previously-recorded footage and analyse the GPS data along with it.

The Z-Edge Z3D system has the capability to record at 1440@30fps, but only if a single camera is in use – not ideal when you’ve just bought a two-camera setup. The built-in processor simply isn’t strong enough to record two separate streams of 1440p footage, so those who use the two-camera setup (aka most people) will be capped at 1080p@30fps across both cameras.

It’s certainly a shame, but it’s understandable for a dual-camera setup at this price point.

Like a host of other dash cams on the market, the Z3D offers GPS support and features a built-in G-Sensor for collision detection alongside a dedicated parking mode that can monitor your car and record impacts when your car isn’t in use.

While that is a very handy feature to have, the downside is that the camera has to be hardwired into the car as most cigarette lighters stop providing power within five minutes of the engine being switched off. There is a built-in battery, but it’s used mainly for emergency file saving and not much else.

You’ll also find looped recording which automatically overwrites old files, saving you the hassle of file management, and it’s smart enough not only to detect a collision but also make sure that the file that captured the incident doesn’t get deleted or overwritten.

While that’s all well and good, it really boils down to the performance of the cameras themselves. Let’s just say that performance can vary quite wildly depending on the available light…

The good news is that, despite the drop from 1440p to 1080p when both cameras are in use, the quality of video produced by both cameras is more than enough to be used in an insurance claim or to help the police.

The front-facing camera offers impressive detail with stationary objects, like a queue of cars at a junction, although some of that is lost when on the move. You can still clearly make out key information like license plates though, even with the sun shining on the reflective surface. 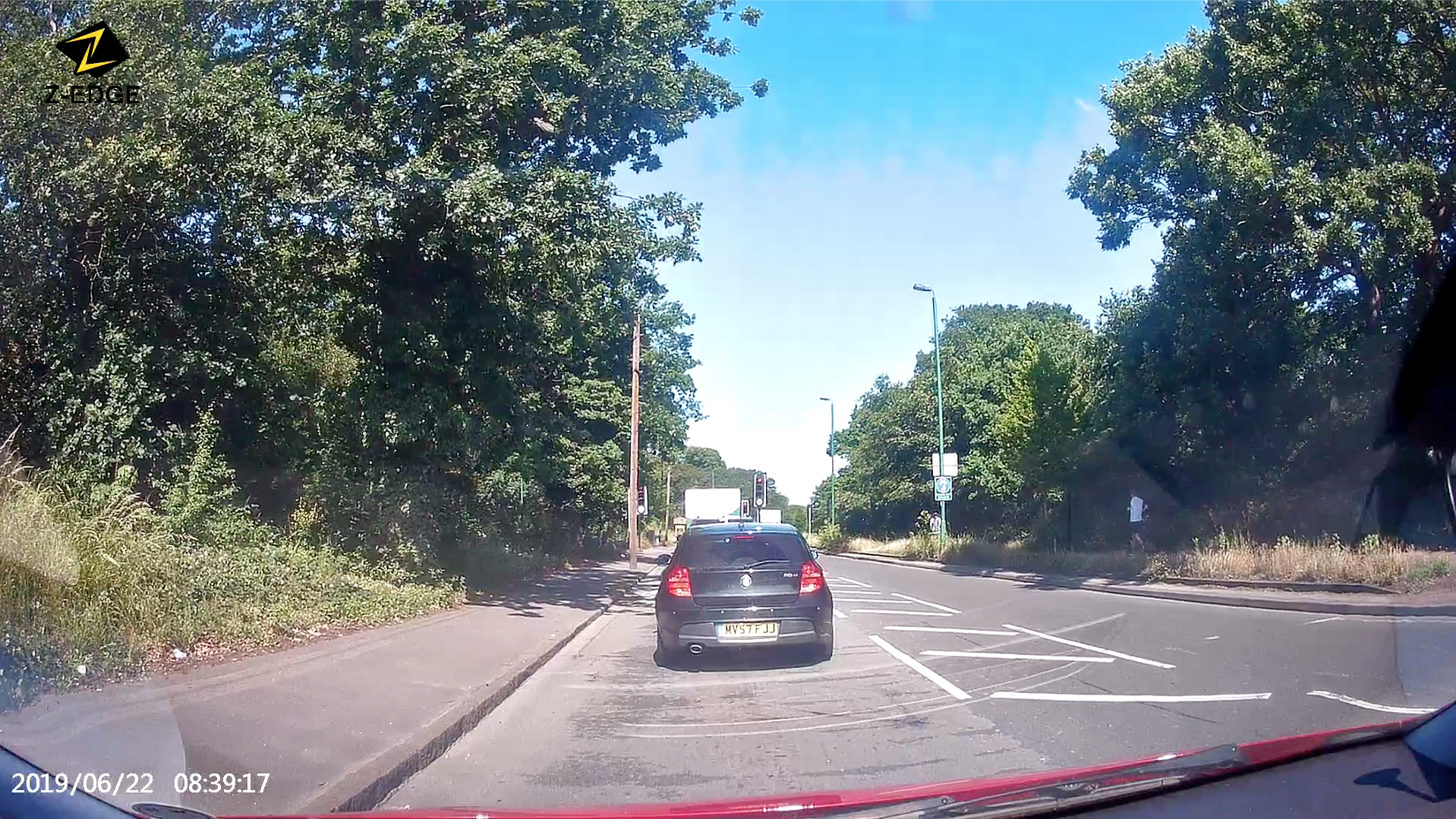 It’s a similar story with the rear-facing camera, although images do look a little softer than what’s on offer from the front-facing camera. But, again, it’s more than clear enough to capture important details like license plates, as the below image shows. 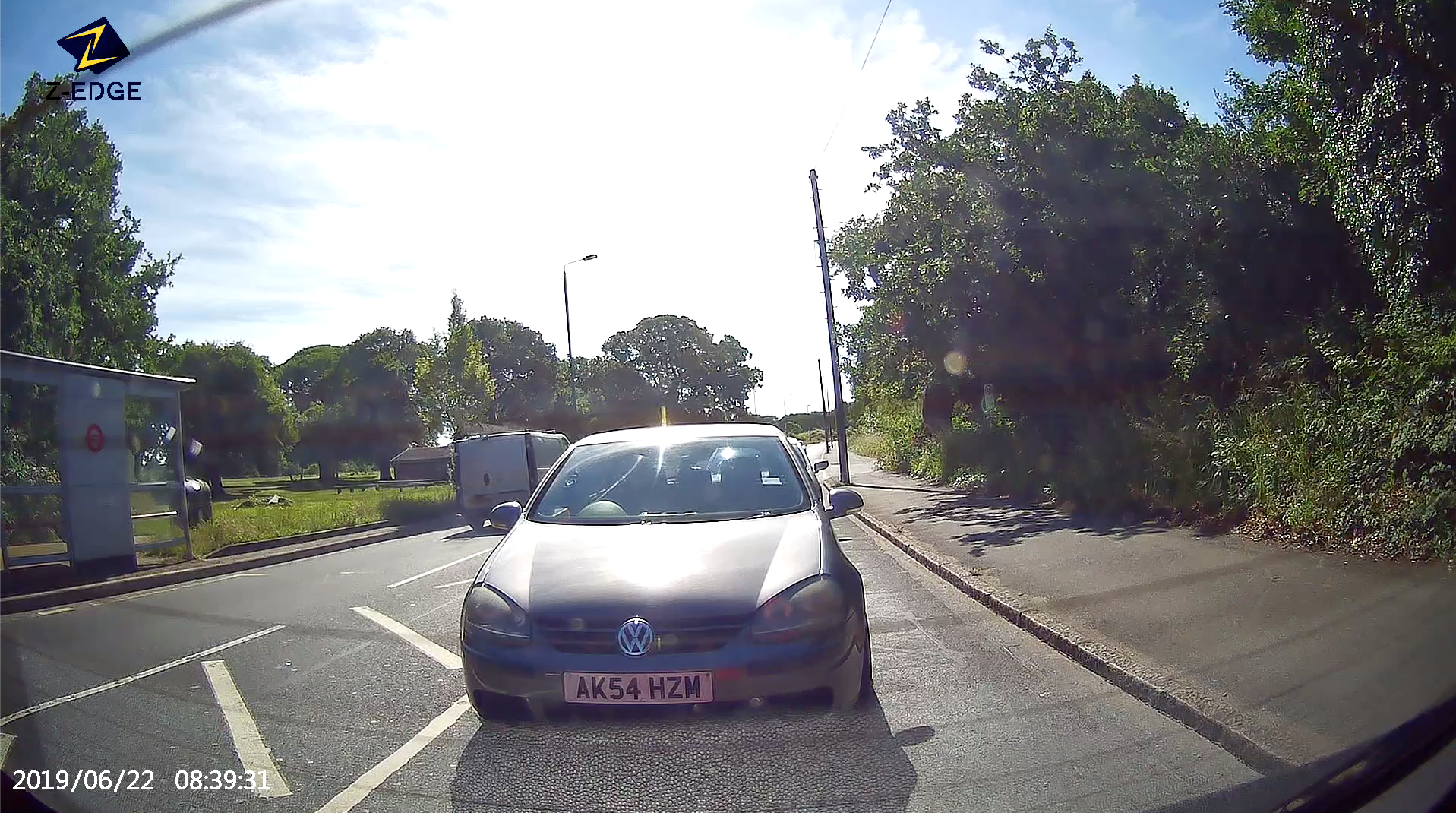 While daytime performance is pretty decent, unfortunately, the same can’t be said about the low-light capabilities of the Z3D system – especially when it comes to the rear camera.

The front-facing camera doesn’t perform too badly, managing to keep focus and, for the most part, capturing fairly minute details like license plates of parked cars. There is a fairly obvious noise reduction algorithm at work, but it’s not so aggressive that it has an overall effect on quality. 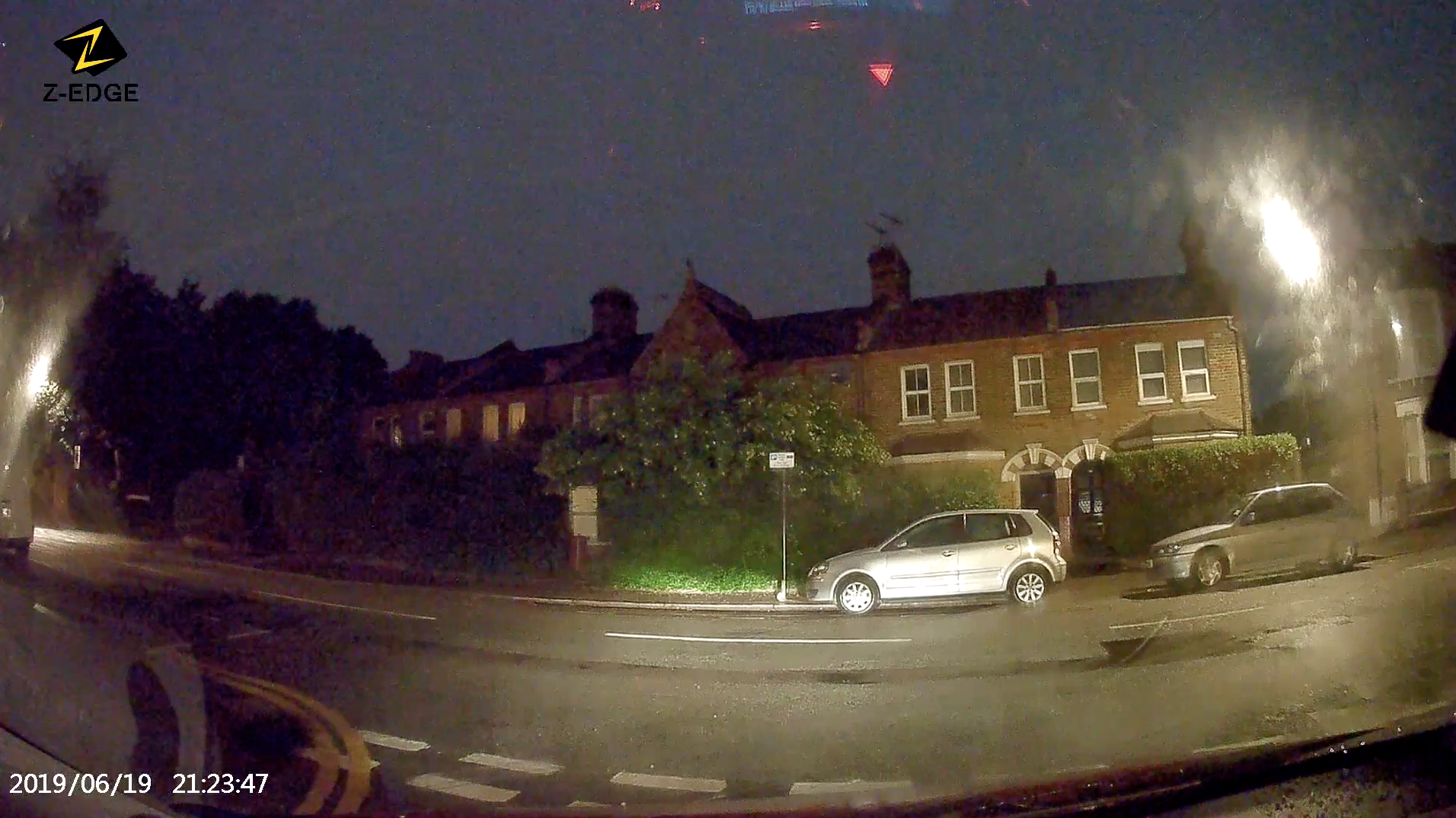 The only real downside is that the touted wide dynamic range doesn’t seem to perform well in the dark, with bright areas lit by headlights often blowing out if reflective.

We’d class the footage captured by the rear dash cam at night as barely passable, as it seems to really struggle with finding and keeping focus in dark environments. Recordings can look extremely blurred when compared to not only the front facing camera but the rear-facing camera’s daytime capabilities. 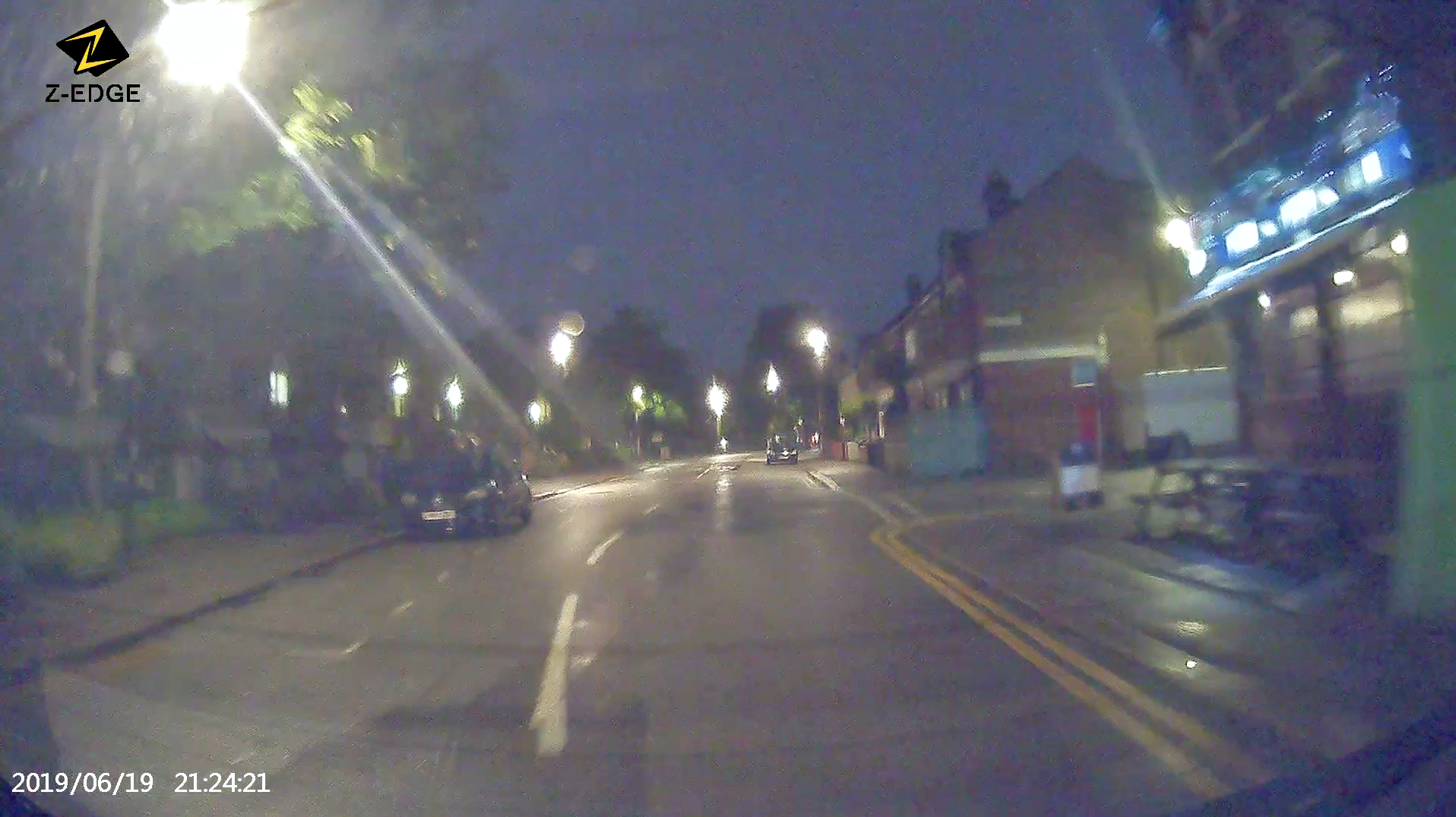 As you can see from the screenshot above, you can certainly see what’s going on, but you won’t get much detail from it.

If you’re after a dash cam that doesn’t break the bank, the Z-Edge Z3D system is a decent option – especially with premium features like built-in GPS and separate cameras for recording the front and rear of the car. The build quality is decent, although the 8m USB cable that connects the two cameras is unusually thick, making it harder to conceal.

The image quality during the day is great from both cameras, and the front-facing camera continues to perform well at night, although that’s where the rear camera fails and where the budget price tag starts to shine through. The rear camera seems to struggle to focus in low-light conditions, not ideal for a bit of kit whose main purpose is to record data. It’s enough to see what’s going on, but you may not make out finer details like you can with the front-facing camera.

There’s no Bluetooth or Wi-Fi so you have to remove the camera from your car to view footage and GPS data, but the good news is the Z-Edge media player is available for both PC and Mac, making the review process slightly easier.