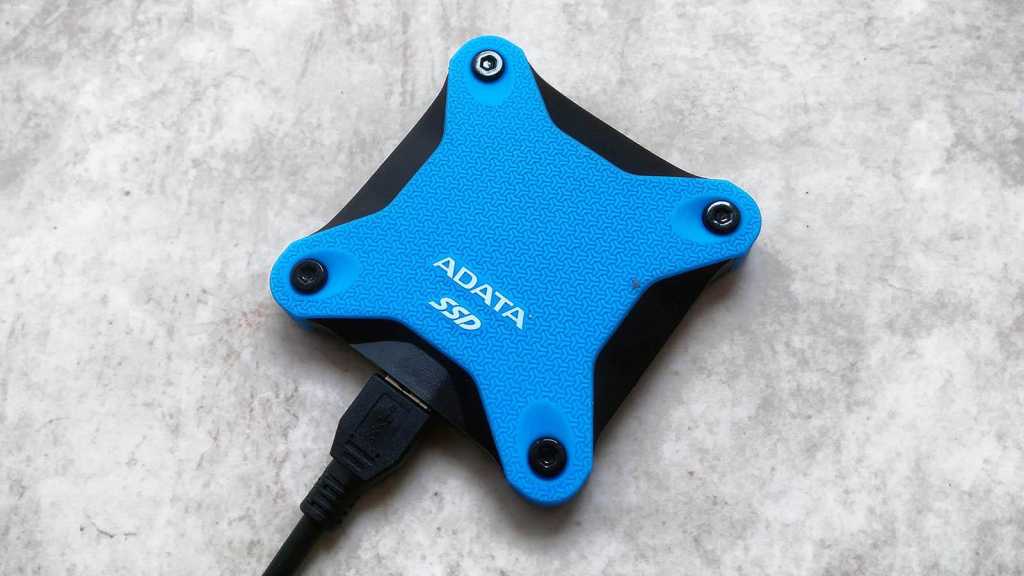 A robustly built drive with enough performance over USB 3.1 that it can copy the contents from or to a computer internal SATA SSD rapidly. Easy to use, pocketable and priced to please.

USB technology was never conceived for external drives, originally. But each iteration has enhanced that experience and with USB 3.1 technology external Solid-State Drives (SSD), like the Adata SD600Q, are feasible.

As fast as an internal SSD, but easily removable and transportable, the SD600Q provides the ideal platform for those who like to leave on time with all their important data.

Check out our chart of the best portable hard drives and SSDs.

Adata describe the SD600Q as having ‘Dazzling’ looks. We’re not sure if we’d go that far, but the ‘X’ form motif of the drive is stylish, and by making the two case parts from different materials it is also nice to handle. 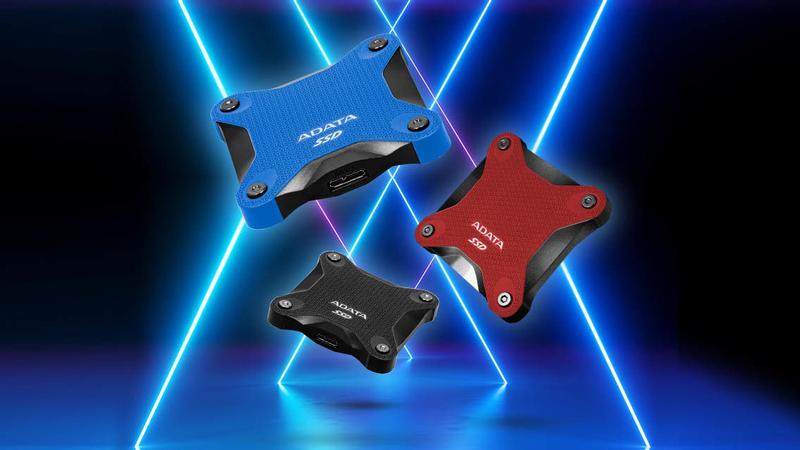 The pictures don’t convey well the scale of the drive, but at 80 x 80 x 15.2mm and just 60g, it is easily pocketable for those leaving the office or house in a hurry. The main shell of the drive is a hard impact resistant plastic, where the coloured brace is in a softer rubberised silicone. The whole assembly is held together by four M3 bolts, one located in each corner.

This construction is designed to give the drive the sturdiness to achieve the U.S. Military MIL-STD-810G 516.6 standard. While sounding impressive, this isn’t a fixed definition, as it enables those using it to tailor test methods to match the application. The number of drops and the height that it falls are all flexible, and Adata doesn’t mention which parts of MIL-STD-810G 516.6 they tested for, other than it can survive a fall from 1.22 meters (4ft).

Looking at the design, we’re reasonably confident that it can handle being dropped a few feet on to a hard surface a few times, as it has no moving parts, but we wouldn’t throw it around the office to test the edge of that envelope. Probably the best gauge of its robustness is that Adata gives it a three-year warranty. 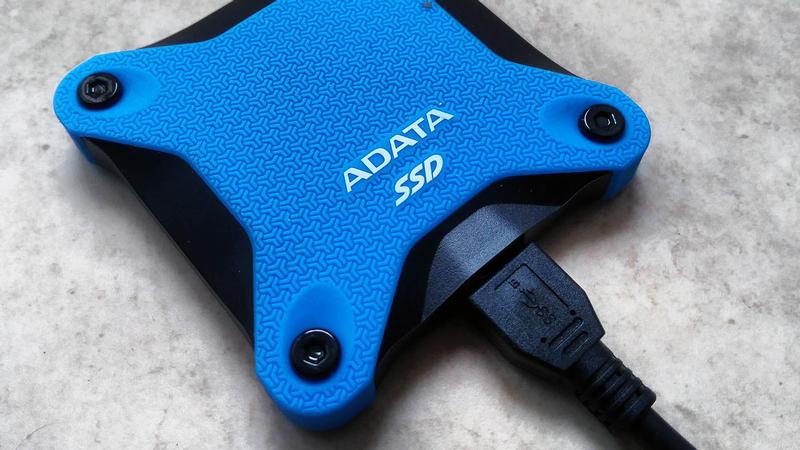 Along with the drive, the only other items in the box are a printed ‘quick start guide’ and a 30cm USB 3.1 cable that is Type-A at the computer end and Micro-B at the drive end. We are mildly disappointed that Adata didn’t use the more modern and reversible Type-C at the drive end, but you can pick up a Micro-B to Type-C cable relatively cheaply if needed.

But the outside isn’t the most important aspect of this product. That’s the SSD device that Adata mounted inside the abuse-resistant case.

We tested a blue model with 480GB of capacity, and according to the promotional material this unit can read and write data at 430MB/s, as can the other two capacities.

That speed tells us a couple of things, one of those being that this is almost certainly a repackaged SDD that was originally designed for use as a SATA connected internal drive. And, it also hints that this might have been a little faster had the interface been a USB 3.1 Gen 2 variety, and not USB 3.1 Gen 1.

Testing threw up some interesting results, depending on the software used for testing, but mostly lived up to the billing Adata gives it. 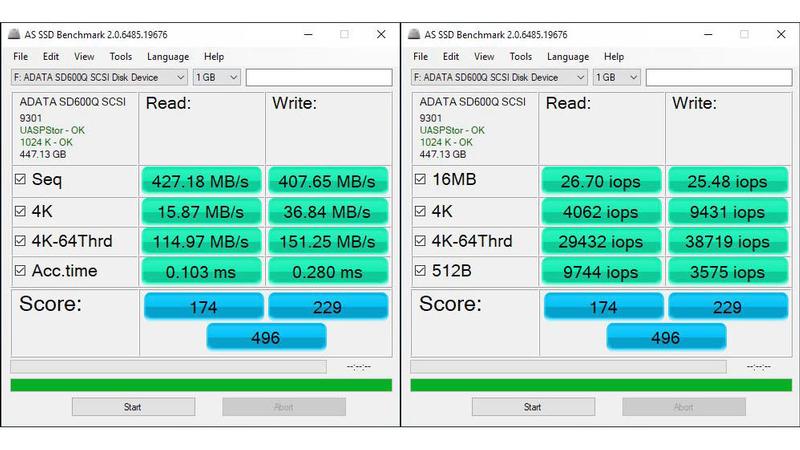 For some reason, Crystal DiskMark 6.0 presumes slower read speed, but similar write performance. The AS SSD benchmark is considered a more discerning benchmark of drive performance, and therefore we’re more inclined to believe its scoring over DiskMark here.

There is a fine balance in a product like the Adata SD600Q between making it the best portable SSD you can buy and one that anyone could afford. And, predictably for Adata, it went for the mass-market option where the drive could be made faster, but most people could afford one.

At less than £80 ($59.99) for the 480GB model is a snip, and it’s fast and robust enough to be genuinely useful. Faster than most thumb drives, and 80% of the performance of most internal SATA SSDs. Unless you’ve got terabytes of data to transfer, the SD600Q is quick enough for most purposes and ideal to use as a live document sync storage.

Overall, the Adata SD600Q is a great performer even if it seems built to an exacting price. A cost that won’t be excessively inflated by purchasing a Type-C cable for it, should you want that connectivity. Those with USB 3.1 Gen 2 ports on their machines might be able to get an even faster portable SSD, like the Western Digital My Passport SSD, but almost certainly not at this price.

There aren’t any applications pre-installed on the drive, but you can download some from the Adata website. Including OstoGO, a tool that lets you put the Installation DVD for Microsoft Windows Vista/7/8 on the drive. And, HDDtoGO, a sync tool that can copy away documents, email, bookmarks and passwords and encrypt them on the portable SSD.

There are many other ways to achieve the same objectives, but Adata does at least provide these free, for those willing to hunt them down.