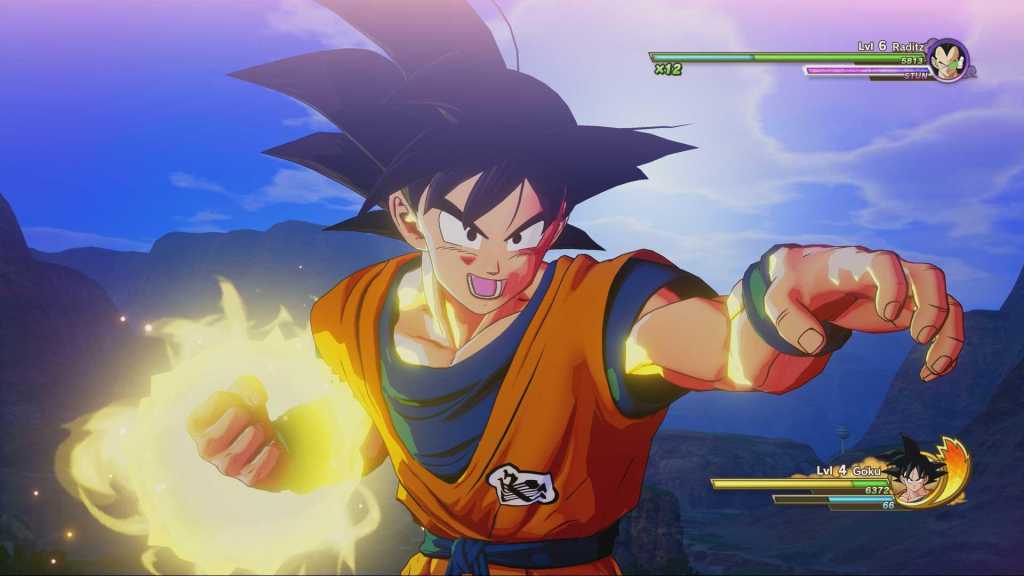 Dragon Ball Z: Kakarot is an easy game to recommend to fans of the series. I’s not a masterpiece, but there’s a lot to love and it’s absolutely packed with fan service. Dragon Ball newbies should steer well clear though. From the title onwards Kakarot has absolutely no interest in explaining itself to potential new fans, and anyone not already familiar will find the game’s myriad frustrations impossible to overcome.

Whenever a long-running franchise is adapted into a game there’s presumably a decision early on about whether this one will be ‘for the fans’ or if it will try to expand the fanbase by luring in a new crowd. Dragon Ball Z: Kakarot is, unequivocally and to its core, ‘for the fans’.

This is a game that’s not only intended for those already invested in the Saiyan saga, it simply assumes you already know enough that it can just skip all the exposition and explanation and get on with the game: a mixture of a simple (but satisfying) combat loop, a strange set of RPG-lite systems, and some slightly thin open-world sections.

Dragon Ball fans will no doubt have fun with Kakarot despite the ropier elements (as many did with the similarly hit-and-miss Jump Force), and the game is packed with references, subtle details and expanded characterisation that make it well worth yet another run through the full Z story. But if you can’t tell your Goku from your Gotenks (or have no idea what Kakarot even means) then please, stay clear: this isn’t for you. But boy have I got the 200-episode epic anime saga you should go and watch.

If you’re still here, Dragon Ball Z: Kakarot shouldn’t need much introduction. It’s an action RPG take on the series that encompasses the entirety of Dragon Ball Z (though not regular Dragon Ball, or the GT & Super follow-ups) from Raditz’s arrival on Earth up until the defeat of Majin Buu.

The name alone should clue you in that this is a game intended for existing fans, an ethos that runs throughout the game. Yes, it follows the full storyline of the main series, but it feels more like a companion piece than a standalone adaptation. There’s more of an emphasis on downtime and quiet interludes – the stuff that would be cast off as ‘filler’ by most anime fans – and key things are never explained.

For an early example, take Goku’s Spirit Bomb technique. There’s a brief mention of the name when he first arrives on King Kai’s planet, but at that point the game is far more interested in Gohan and Piccolo’s training on Earth. So instead of following up, showing Goku learn it, or even explaining what it is, the game never mentions it again… until Goku whips it out to save the day in the fight against Vegeta.

To anyone new to the series this would be incomprehensible storytelling, but it’s surprisingly smart. It’s just one of many examples where the game skips past the exposition that fans have heard time and time again – instead dumping it all into an encyclopedia sub-menu no-one will ever read – to keep the focus on the big, showy moments, but also the quiet ones in between that the show itself rarely had the time for.

The game expands that year of waiting for Vegeta and Nappa to arrive on Earth, and the wait for the spaceship to be ready for the voyage to Planet Namek, giving you the chance to explore the game’s open-ish environments, fly around like an idiot, and play through a series of sub-quests that delve not only into the core cast, but into characters from the older days of Dragon Ball that even committed Z fans may not know well.

Some of these work better than others. Following Puar round as he pretends to be Yamcha, maintaining his dating life until a resurrection from the Dragon Balls, is a charming and surprisingly touching look at a character slightly forgotten by the anime’s ever-increasing emphasis on combat. A fetch quest to find spaceship parts for Bulma is, well, a fetch quest. Others featuring older characters like Eighter or Tao Pai Pai will work more or less depending on how niche your knowledge gets.

These quests are all dotted around various open world areas you’re free to explore during the story’s quieter moments. The clunky flight controls eventually click into place (though never quite get as far as second nature), and once you’re there it is a hell of a lot of fun flinging Goku or Piccolo round the map, with the busywork of collecting Z Orbs (the game’s key progression currency) a constant excuse to while away a few minutes soaring aimlessly.

Z Orbs are what you use to unlock and advance each character’s special moves (which are often also gated by story requirements, understandably) but you’ve also got to worry about XP to level up, Zeni to buy and sell goods with, both cooking and crafting systems, and ‘community boards’ which let you strategically place (and separately level up) icons representing the cast of the extended Dragon Ball universe, gaining bonus for setting connected characters next to one another.

It’s a lot to take in, and the first couple hours of Kakarot are an overwhelming mess of menus and instructions – all the more overwhelming that they don’t even do a halfway good job of explaining all the systems that are there. The RPG side of the game is far from intuitive, and you will have to fight a bit to master it, but once you do there’s enough depth to keep you engaged once flying around begins to tire, even if the end result is mostly just a load of stat boosts.

It does at least impact the combat – and not just in terms of stat boosts. Every character has both a level and multiple colour-coded health bars, and the game uses both to help create the sort of uneven fights the anime made famous. You might get the chance to team up with another character to take on a single higher-level opponent, or the game might let you trounce a weaker enemy by giving them just one health bar instead of several.

It helps the fights feel closer to how it should – as Piccolo steps out of the early fight against Raditz to power up his Special Beam Cannon I was left scrambling to defend against his attacks, just about staying alive long enough to whittle his health down enough to trigger the next story beat, but it was a close run thing. It’s a shame though that (so far at least, I’ve only made it to Namek) the game never uses alternate battle conditions to simulate the series’ unwinnable fights – requiring you to survive for a certain amount of time or land a specific attack – so even when you know the story dictates that you lose a certain fight, the game still requires that you win it first.

That combat can take place both on the ground and in mid-air, with a usual mix of melee attacks, ranged Ki blasts, special attacks (activated by combining the left trigger and the face button), and both block and dodge options. Ki blasts and specials burn through the Ki meter, and you’ll need to sporadically get a bit of distance to top it up.

The camera occasionally struggles to keep up – getting stuck right behind your character or under the ground – but for the most part Kakarot handles the 3D fighting well. Triggering melee attacks will automatically lunge you at your current target, closing the distance quickly, saving you from worrying about navigating too precisely.

This isn’t quite the tight, polished combat of FighterZ, but then it isn’t trying to be. Moving into a fully 3D space introduces a certain looseness, but it also allows Kakarot to embrace the scale and fluidity of the anime’s biggest battles as you knock opponents across the map. And I promise, that at least is exactly as satisfying as you hope it’ll be.

Dragon Ball Z: Kakarot is an easy game to recommend to fans of the series. No, it’s not a masterpiece, but there’s a lot to love and it’s absolutely packed with fan service. It sits as a slightly odd alternative to watching the anime itself again – complete with the choice of a Japanese or American dub, with the original casts – with its own highs, lows, and odd bits of filler.

Dragon Ball newbies should steer well clear though. From the title onwards Kakarot has absolutely no interest in explaining itself to potential new fans, and anyone not already familiar will find the game’s myriad frustrations impossible to overcome without the appeal of fan service to smooth things over.