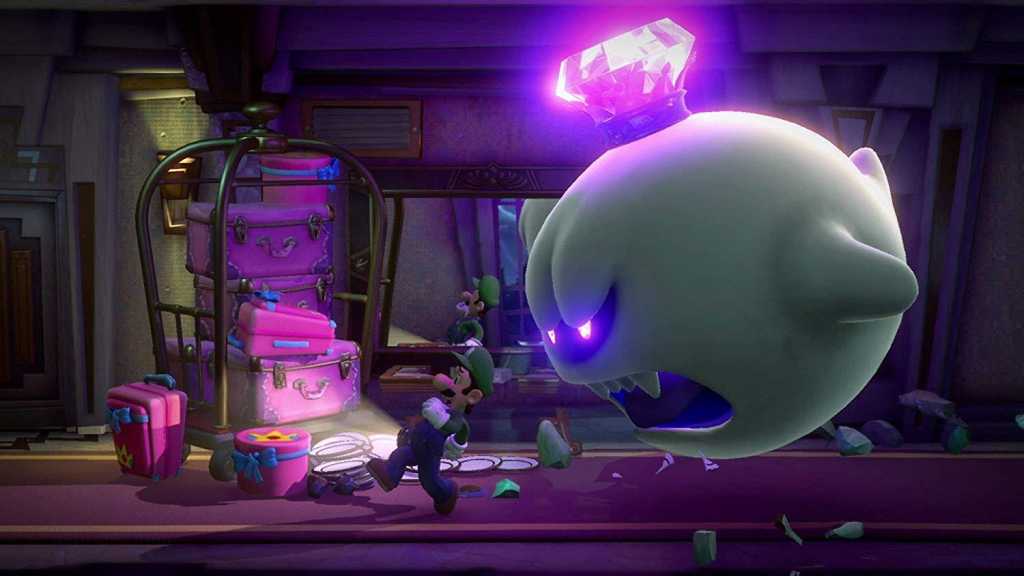 Luigi’s Mansion 3 is a slick reminder that Luigi remains Nintendo’s most wasted asset (sorry Waluigi fans), and he and the ghosts are as charming and characterful as anything in a mainline Mario game. Despite a few wobbles the mix of action and puzzles delivers too, and the only thing the game really needs is an editor: surely the 17 floors here could have been condensed down to lucky number 13?

Luigi’s Mansion is in many ways Nintendo’s cruelest series. The GameCube original’s stroke of genius was realising that Mario’s beleaguered younger brother is at his best not as hero, nor as sidekick, but as quivering nervous wreck, and the games exist almost purely to put him through the ringer.

It’s perhaps a measure of kindness than that Nintendo has spaced the entries out – the original Luigi’s Mansion was way back in 2001, its 3DS follow-up Dark Moon arrived during 2013’s Year of Luigi, and now Luigi’s Mansion 3 has finally arrived to torment the poor plumber once more.

The game’s not out just yet, but it arrives this Thursday – i.e. October 31st, Halloween – on the Nintendo Switch. You can pre-order it though, with bonuses including a keychain or glow-in-the-dark T-shirt from the UK Nintendo store or a glow-in-the-dark steelbook from Game. Target did have a tote bag pre-order bonus in the US but it’s already sold out, though you can just grab the game on its own from Amazon.

Check out our guide to the best Switch games if you’re looking for more of Nintendo’s finest, or our round-up of the latest Switch deals in case you don’t own the console but Luigi’s got you tempted all of a sudden. 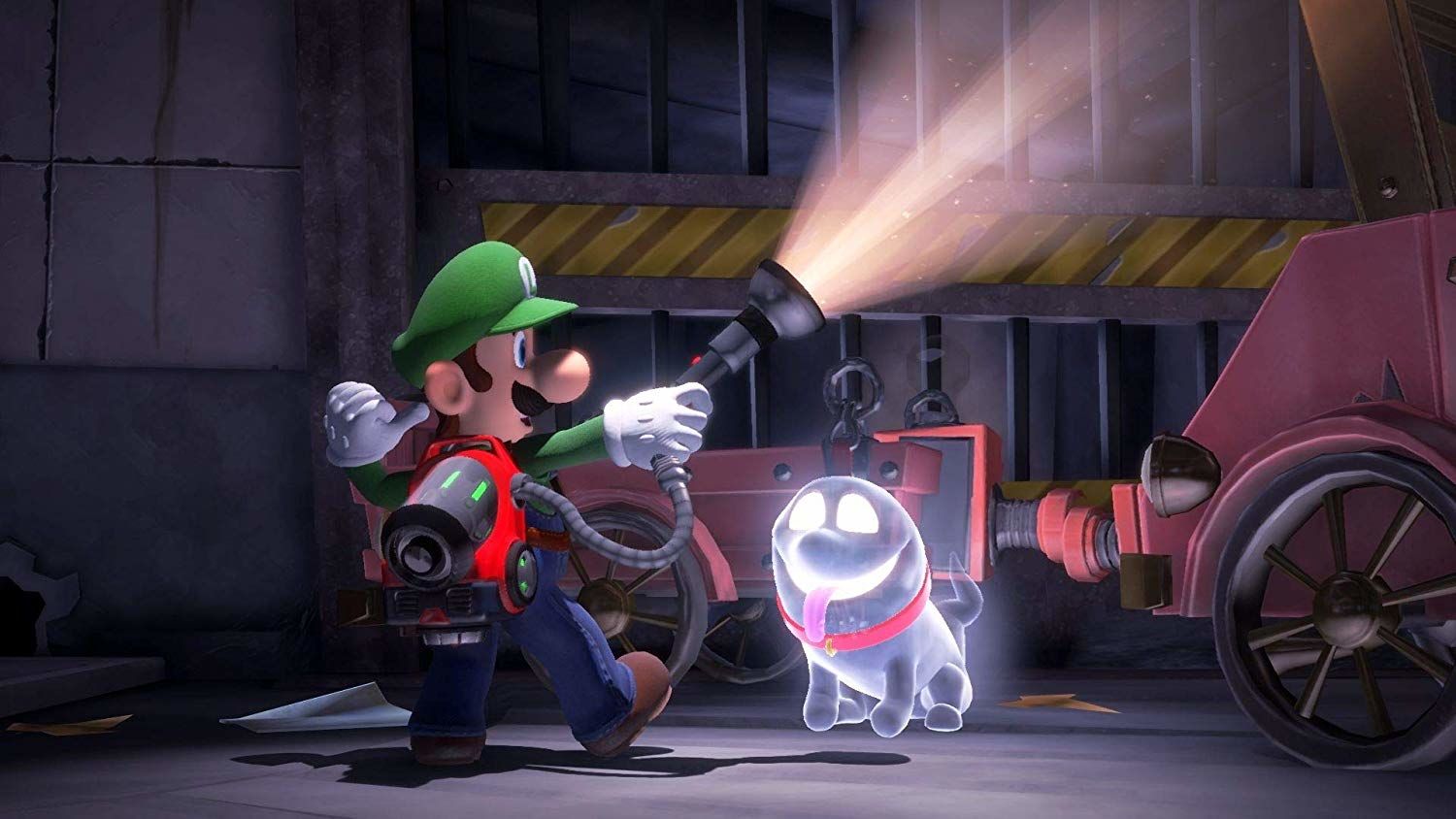 If you’re new to the series, here are the basics: you control Mario’s lankier brother, armed with only a flashlight and a vacuum cleaner, as you clear a haunted mansion (or, in this case, hotel) from a legion of mischievous ghosts, like a low-rent Ghostbuster.

The core gameplay loop is simple, but fun: explore the building, solving puzzles and fighting ghosts along the way. The fights are fun, with a two-step approach to capturing even the most basic ghosts: stun with the torch, then suck up with the vacuum. Other spectres require a bit more thought, and plenty of fights force you to juggle multiple ghosts at once.

The real charm though is in the tone, which Nintendo has nailed more effectively than ever this time around. Luigi is an absolute mess, tiptoeing as he explores, and yelping in fear throughout. It says something that the game’s sense of humour is exemplified not by Luigi, but by his opponents, who take every opportunity to tease, mock, and shock the erstwhile hero – to the clear delight of the devs.

In short, Luigi’s Mansion 3 is utterly charming and genuinely funny, prompting more giggles than gasps – though I’m not afraid to admit that the game did get me with exactly one jump scare. 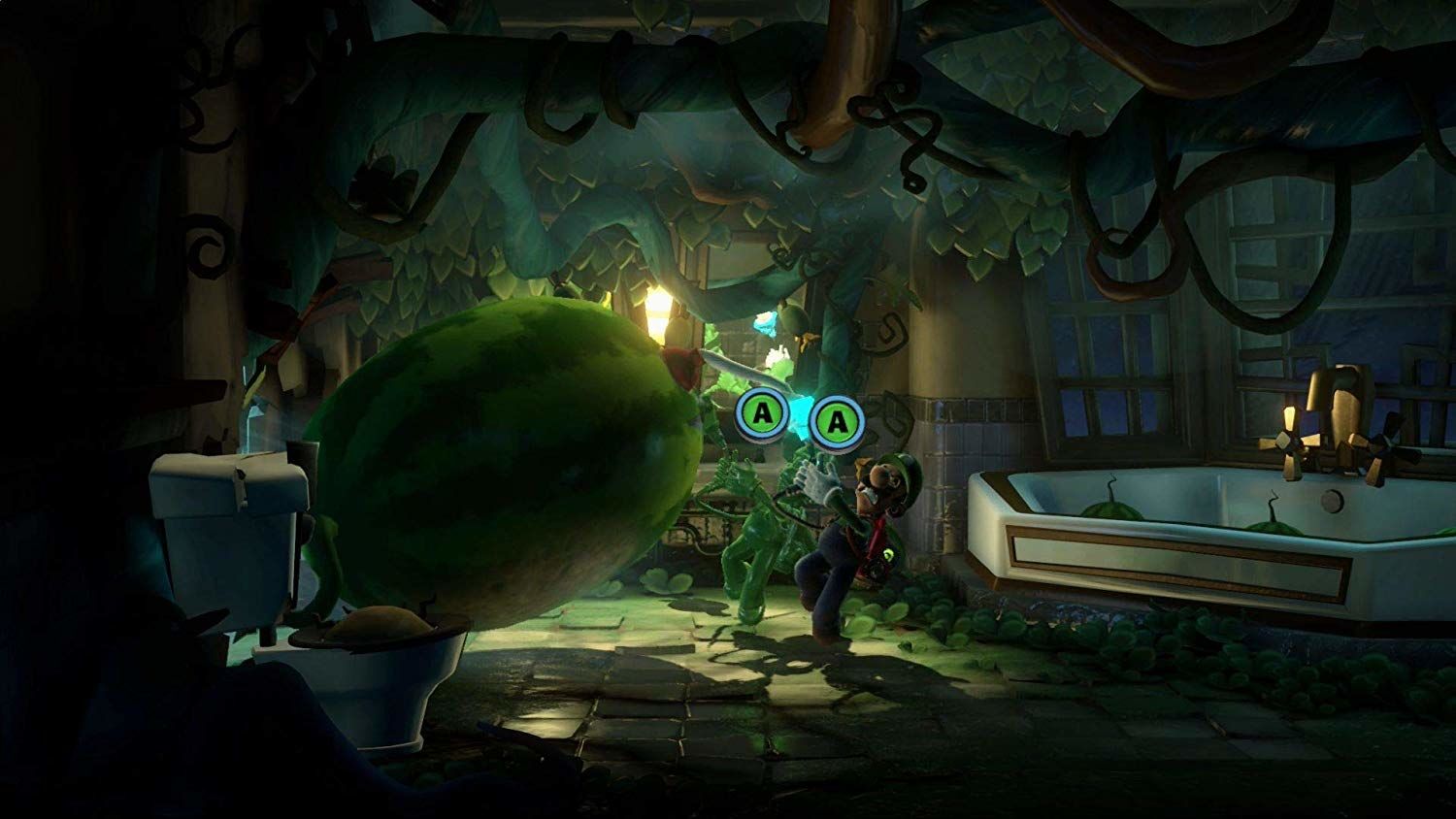 Luigi’s constant state of anxiety (the first truly millennial hero) is somehow amplified by comparison to his companion: the sinisterly stoic Gooigi. This invention of resident mad scientist E. Gadd is the major addition to the game’s puzzle solving: a shimmering, slimy facsimile of Luigi with an implacable thousand-yard-stare.

Despite being made entirely of green jelly Gooigi somehow manages to quiver less than his flesh-and-blood counterpart, but that’s not his only strength. He can slip his squidgy self through metal bars and floor grates to explore new areas (like a T-1000 made out of Flubber), or dive through narrow green pipes in the latest take on the Mushroom Kingdom staple.

You can only control either Luigi or Gooigi at once – or both if someone joins you for co-op – and mercifully Nintendo mostly avoids the obvious two character puzzles like switches you have to stand on simultaneously. Instead, Gooigi puzzles mostly revolve around the different places the two characters can reach – any amount of water will reduce Gooigi to, well, goo – though once they’re there the two have identical power sets.

The puzzles are mostly satisfying, only occasionally veering into the obtuse and slightly more often into the obvious. In addition to the puzzles that let you advance through the game, plenty will reward you with cold hard cash (this hotel is swimming in bills and gold bullion) or with one of the six gems hidden on each of the hotel’s 17 floors. 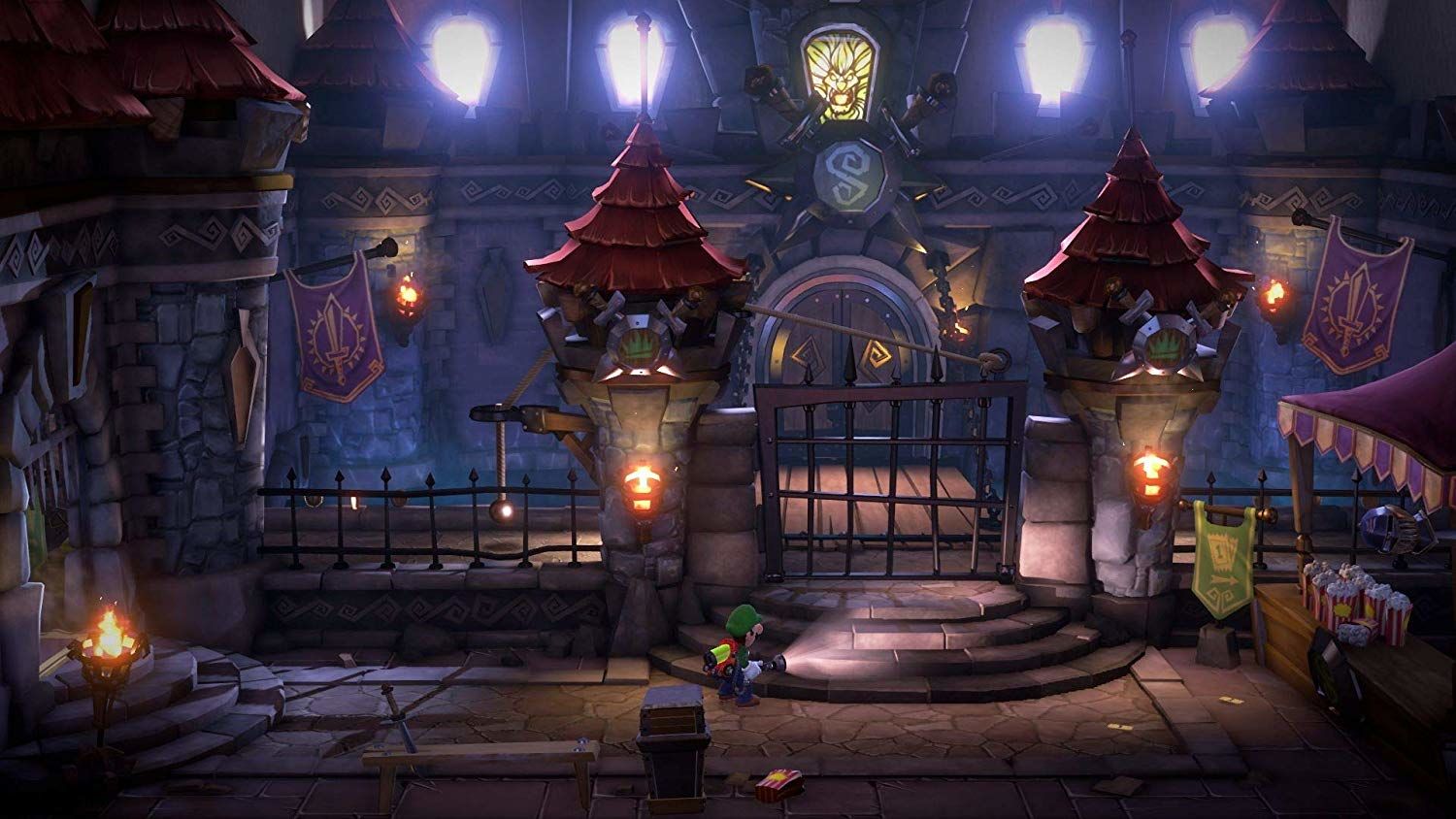 And don’t worry, you don’t have 17 floors of monotonous bedrooms to work through. While the game’s early hours hit the hotel staples – lobby, kitchens, suites, ballroom – it’s not long before the architecture gets unhinged. There’s that holiday classic ‘Egyptian tomb floor’, complete with desert and pyramid; the pirate floor (with an entire sea!); and somehow even a fully functioning professional movie studio inside the hotel.

So yeah, it’s fair to say that the hotel structure is mostly window dressing, and it’s hard not to wonder if this was always the plan. Especially since brief moments of backtracking hint at a Metroidvania that could have been in a game that is otherwise occasionally frustratingly linear: access a new floor, puzzle your way through, fight the boss, rinse & repeat.

The bosses are a mixed bag – some too convoluted, some too cryptic, some all-too-brief – but they’re all pretty charming, and there’s a phenomenal sense of scale to a few as the game gives up entirely on the internal geometry of the hotel – a full-scale T-Rex skeleton in the hotel’s natural history museum (???) is a particular highlight.

Some floors undeniably outstay their welcome though. The less said about the flooded basement the better, while one level really pushes its luck by asking the player to trek back through almost every room with a fresh set of fights after clearing it the first time. That’s a problem the whole game suffers from too – it’s probably about 15 hours to complete, which doesn’t sound like a lot, but while the set dressing changes there’s not really enough variation in the gameplay itself to carry it quite to the end. 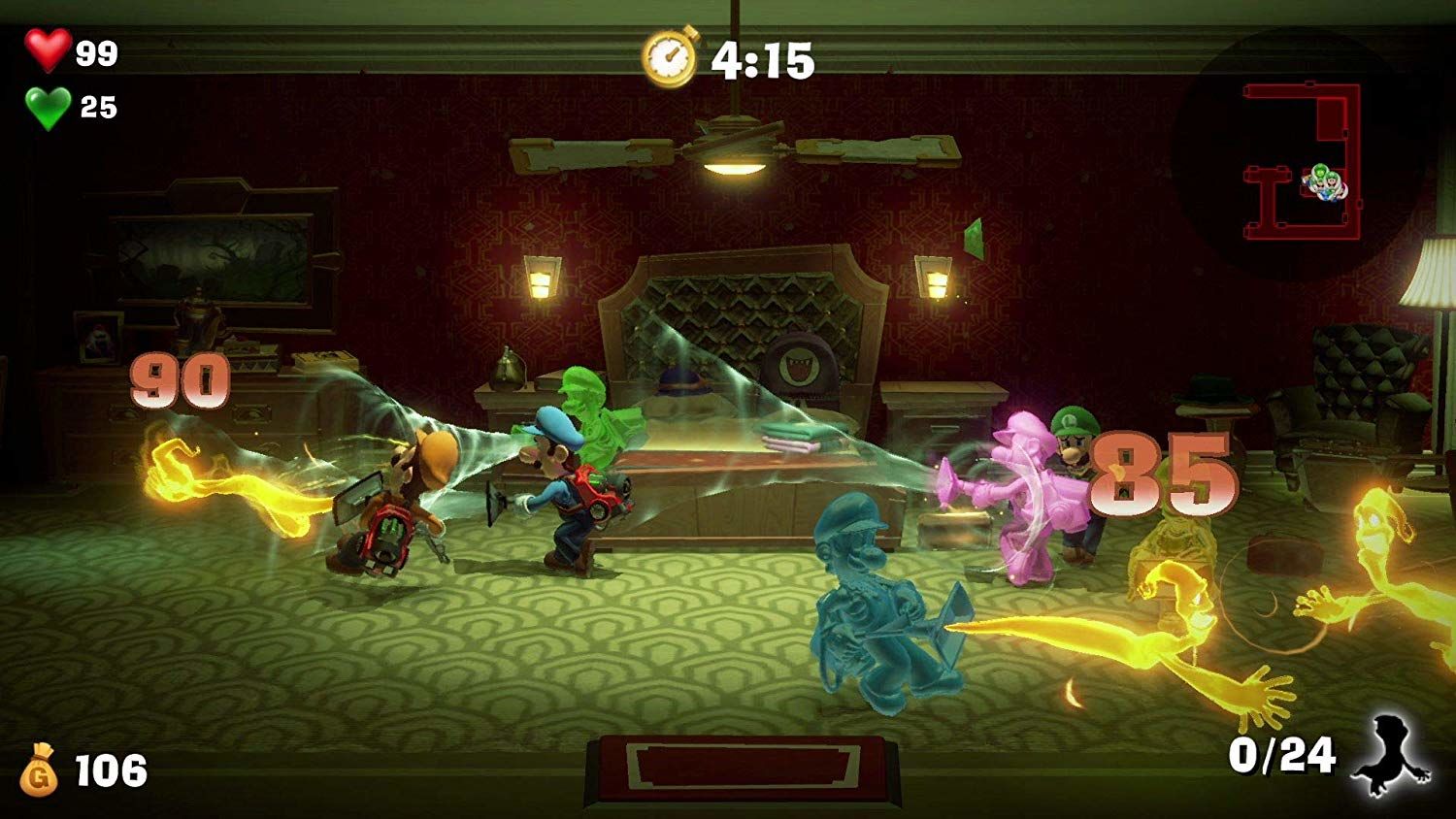 Outside the main solo campaign, there are a couple of multiplayer options too. ScareScraper returns from the last Luigi’s Mansion, a co-op experience in which you work through a set number of generated floors with different goals on each one.

There are also three competitive mini-games that each support up to eight players for local multiplayer, in teams of four. Each is slight, but there’s a manic energy to them, like the best of Mario Party, and they used a pared back control scheme to keep things friendly to newcomers.

Luigi’s Mansion 3 is a slick reminder that Luigi remains Nintendo’s most wasted asset (sorry Waluigi fans), and he and the ghosts are as charming and characterful as anything in a mainline Mario game.

Despite a few wobbles the mix of action and puzzles delivers too, and the only thing the game really needs is an editor: surely the 17 floors here could have been condensed down to lucky number 13?