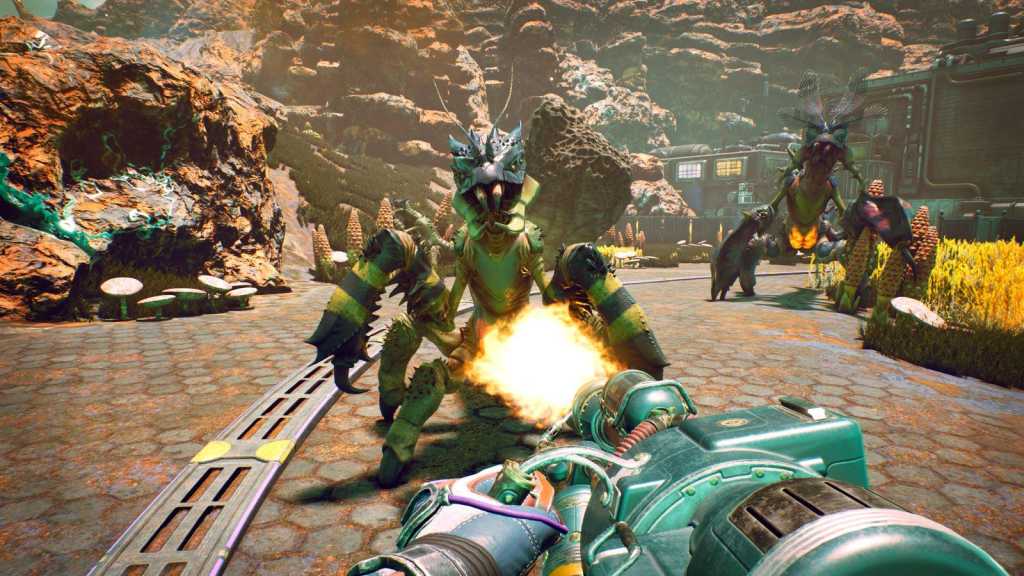 The Outer Worlds is essentially trying to appeal to a very specific niche, and you probably know if you’re in it. The good news is, it really does deliver on what it promises. The writing is mostly sharp, even if the satire sometimes falls flat, and the relatively tight story leaves enough breathing room for expansive player choice and roleplaying while keeping things brief enough to make it easy to go back in a second time and see the game from another perspective.

Obsidian Entertainment is best known for creating Fallout: New Vegas, widely considered one of the best games within the Fallout franchise. Now the developer is taking a turn at its own expansive, anarchic sci-fi RPG shooter in The Outer Worlds.

This isn’t a Fallout game, but the DNA is clear. Only instead of a post-apocalyptic Earth it takes an arch-capitalistic space colony as its setting, leaning deeper into anti-corporate themes as it lets players build characters that let them navigate the world of Halcyon just about any way they please.

The Outer Worlds is out now on PC, PS4, and Xbox One and Nintendo Switch. You can grab it right now from Amazon, or check our guide to where to buy the game to find out basically everywhere it’s for sale.

The game see you step into the space boots of a colonist in the Halcyon system. You’re one of the inhabitants of the supposedly lost colony ship Hope, revived 70 years late to discover a solar system overrun by corporatism. It’s then up to you to decide whether to fight the man and bring the capitalist structure down, carve out your own niche as a freelancer for hire, or quash the various socialist and anarchist rebellions and prove yourself a company man and/or woman.

At its core, this is a Fallout-esque game. It’s a first-person sci-fi RPG in which you’ll navigate the various planets of the Halcyon from behind the barrel of a gun. Shooting is central, but you can also talk, bribe, hack, and sneak your way through most of the problems that you’ll face, and there’s a heavy emphasis on the scope of player choice here.

That’s clear from the get-go. Character creation not only gives you the requisite set of physical characteristics to tweak (not that you’ll see them often) but also a whole set of stats to dump points into. High points in stats give you extra bonuses and abilities, while skimping will give you disadvantages you’ll be stuck with the whole way through the game.

You get to keep distributing points and perks – special buffs – throughout the game as you level, continuing to shape your character’s abilities and playstyle, with your gear and companions offering further buffs and debuffs. That really lets you lean into ranged weapons, melee fighting, hacking, charming, or intimidating as your go-to approach, or mix-and-match for a jack-of-all-trades.

Plenty of games offer that sort of diversity in character building, but few do such a good job of following it through in-game. Most missions – especially the larger main story ones – give you a choice of different approaches to take, and I only rarely felt I had to compromise my personal vision of my character’s take on things to fit into one of the approved options.

That inevitably means consequences abound. You can kill almost any NPC, and pick fights with every faction, which will quickly result in whole towns or corporations turning against you if you’re not careful – in turn closing off some narrative options, while perhaps opening up others. The main story runs to 30 hours or so, making it lengthy enough to feel fulfilling in its own right, but short enough to reward replayability.

Roleplaying even extends to the combat. Not just in the sense that your stats dictate your approach to fight either – the game will dynamically offer you the chance to take on new faults based on how you play. I kept getting killed by robots, giving me the chance to become phobic of them, making me even worse at fighting robots – but in turn getting an extra perk point to give myself a buff elsewhere and let my character be shaped by her escapades.

Combat itself is fine, but it’s definitely one of the game’s weaker links. Shooting feels OK, and there’s a decent amount of weapon variety, improved further by the chance to mod weapons in various ways and even switch them between various damage types. You can also slow down time temporarily to target specific body parts and trigger various effects, in a system that might as well be called definitely-not-VATS-please-don’t-sue-us.

You can also be joined in fights by up to two companions, who you can direct with (very) basic commands and who will each have a special ability. These abilities are mostly just big damage attacks with a short cut scene you can’t skip, and you will get fed up of them, I promise.

Really, the companions are more important to the game’s roleplaying side than its combat anyway. There are six, five of which bring their own companion quest line (one is more of a comedy character) and will offer their opinions on the game’s other moral dilemmas along the way.

They’re thinly sketched by comparison to the Mass Effect series, but each has a strong sense of character and their own charms – though it’s the first two you’ll meet, the engineer Parvati and space vicar Max, that have the strongest arcs. There are no romance options, and not much scope to build your own relationship with them – romantic or otherwise – but it’s unexpectedly impactful getting the chance to confer with them on the game’s biggest decision points, and they actually offer more diverse and challenging viewpoints than the Andromeda’s crew ever did.

Those big decisions are varied in themselves. Capitalism is obviously where the game’s writers have set their sights, but there’s more to it than just ‘corporations bad, unions good’. On one planet you’ll have to choose between supporting the well-meaning leader of a smaller company hoping to reform the Halcyon Board from the inside or a camp of deserters hoping to violently tear the whole system down, and in that and other quests it rarely feels like there are easy answers.

It helps that the world itself looks gnarly in the best possible way. There’s always an element of detachment when a multi-million dollar game backed by a major publisher decides to skewer corporate interests, and while Obsidian doesn’t pull its punches there’s still a light touch, and the setting here is as gritty as it is tongue-in-cheek.

Unexpectedly, it’s when the game takes itself seriously that the writing shines, and its more satirical side tends to fall flat. The early 20th century-style marketing materials and corporate slogans still feel too familiar in the wake of both the Fallout series and the BioShock games, and for all the jokes I’m not sure I ever actually laughed.

On a sentence-to-sentence level the writing works though, and the wealth of memos, logs, and messages buried in terminals and files across the planets are usually worth reading. The main story is at its best early on when it’s a loose series of errands mostly designed to force you to explore, but once it hits its twist it barrels towards a conclusion in a way that can’t help but feel a little anticlimactic.

That’s at least partly because it puts you off fully exploring Halcyon, which is mostly a joy to wander around. Each planet or area feels distinct, from the overrun wilds of Monarch to the glistening townhouses of Byzantium, with but one frustrating common element: they are overrun with the same pointless loot that clogs up every Bethesda game. It’s endless busywork that just bogs you down with inventory management for no good reason – though at least there’s no crafting to waste any more of your time.

The Outer Worlds is essentially trying to appeal to a very specific niche, and you probably know if you’re in it. The good news is, it really does deliver on what it promises.

The writing is mostly sharp, even if the satire sometimes falls flat, and the relatively tight story leaves enough breathing room for expansive player choice and roleplaying while keeping things brief enough to make it easy to go back in a second time and see the game from another perspective.

The Fallout heritage is undeniable – it’s in the OTT looting, the overly cheery marketing messages, and that definitely-not-VATS attack system – but throwing in companions, changing the setting, and leaning further into the games’ roleplaying roots helps The Outer Worlds feel like a different beast to the official Fallout games coming from Bethesda.