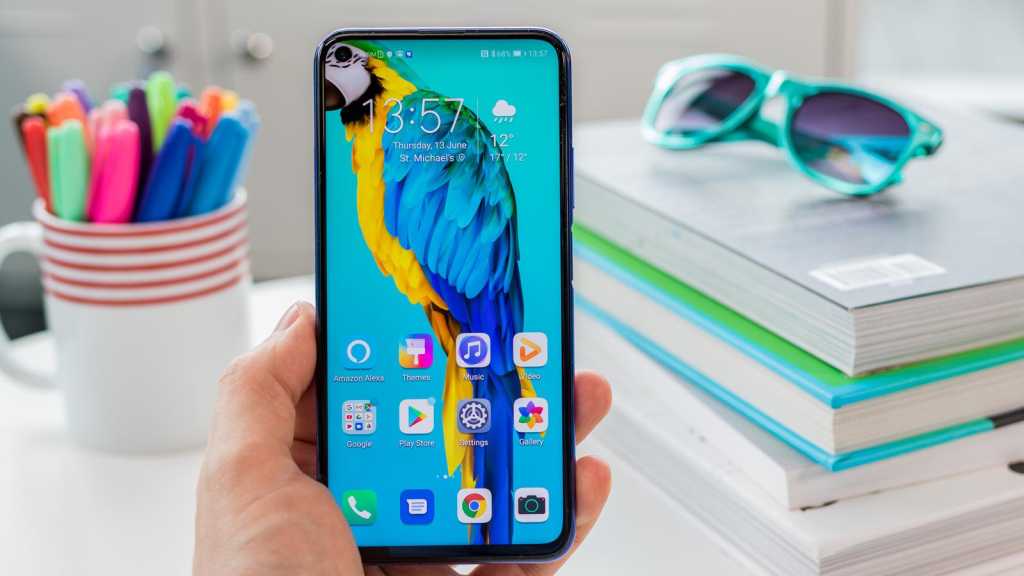 For the price, the Honor 20 is a great all-round phone with top-notch performance and excellent cameras. There are now assurances from Huawei and Honor about future updates which should put cautious buyers more at ease, but we’d understand if you’d still prefer to spend the same money on the Google Pixel 3a, among other competitors.

The Honor 20 is the successor to the Honor 10, which we called “the best mid-range phone”, and sits in the middle of a range of three phones, the first time we’ve seen this strategy from Honor. We’ve already reviewed the Honor 20 Lite and the yet-to-be-released Honor 20 Pro, but in the midst of all this has been the spat between the US and Huawei, Honor’s parent company.

This means there’s an elephant in the room which we need to deal with before talking about the Honor 20 itself. Currently things are up in the air: the ban on US companies dealing with Huawei was due to come into effect on 19 August, but there are now calls for it to be delayed for two years.

If the ban does happen, Huawei – and therefore Honor – will lose access to Android because Google is a US company. This doesn’t affect the Honor 20, though, as it was already certified by Google before everything kicked off. Huawei has confirmed that none of this will affect access to future versions of Android, so the Honor 20 should get Android Q at the very least.

The Honor 20 can be bought from Carphone Warehouse and  Three and is also available from Amazon ,  O2 and Argos.

The Honor 20 Pro is £100 / 100€ more, so you’re saving quite a bit by choosing the Honor 20 which is very similar indeed and only lacks a couple of features.

There’s a fair amount of competition around the £400 mark, including Google’s Pixel 3a, a phone which is guaranteed to get future Android updates.

It’s worth talking briefly about the Honor View 20 here, too. That phone launched in early 2019 and has a similar screen with a punch-hole camera, but lacks a wide-angle rear camera and doesn’t have the 32Mp selfie camera found on the Honor 20.

Now that the View 20 can be picked up for the same price as the Honor 20, the fact it has a headphone jack might just persuade you to buy it instead. But if photography is more important, the Honor 20 is a better choice as you’ll see below.

Given the difference in price, you’d be forgiven for thinking the Honor 20 is a cut-down model. But in key areas, it’s identical to the Pro. It has the same screen, the same processor and – aside from the zoom lens on the Pro – virtually the same cameras.

In terms of design, it’s almost impossible to tell the two apart unless you’re faced with two non-black ones as each model has different colour options. The Honor 20 comes in Sapphire Blue, where the Pro is available in Phantom Blue (which is actually green) and Phantom Black (which is purple).

The both have a fingerprint sensor built into the power button, a dual-SIM tray on the left-hand side and a single speaker on the bottom edge next to a USB-C port.

There’s no headphone jack, and no water-resistance or wireless charging – the latter two being traits you’ll also see in the Pixel 3a, incidentally. But it does have a headphone jack, which will be a deal-maker for some people.

Like the Pro, audio for music, games and videos comes solely from the lower speaker: the one above the screen is just for phone calls. We like that the speaker grille hides a notification light, something that’s not often found these days.

The Honor 20 has the same 6.26in 1080p LCD screen as the Pro model. It may not be OLED as you might expect from a flagship, but it’s great at this price. The punch-hole camera in the top-left corner means the screen reaches almost to all four edges, so the Honor 20 is smaller than you’d think for a phone with a screen this large.

It’s hardly compact, but it isn’t as unwieldy as, say the noticeably taller Huawei P30 Pro.

The highlight of the Honor 20, as far as Honor is concerned, is its photography prowess. On the rear is a quad-camera setup that looks much like the Pro. Three lenses and the flash are contained in a sizeable camera bump.

The main shooter has the same 48Mp Sony sensor as the Pro, but the lens has an aperture of f/1.8 rather than f/1.4. The difference between these isn’t worth worrying about: both take wonderfully sharp photos with lots of detail and realistic colours. If you want to squeeze every last ounce of detail from the sensor you’ll have to switch from the default 12Mp mode to 48Mp Ultra Clarity.

For landscape photos, or when taking photos in confined spaces, the ultra-wide-angle camera is very useful and also produces sharp images.

Instead of the Pro’s 3x zoom lens, the Honor 20 has a depth-sensing camera. So you can’t actually take photos with it. It’s used for assessing how far away objects from the camera are so that it can produce more realistic portrait photos with blurry backgrounds.

And we’re sure you’ll be happy with the quality of portraits from the Honor 20, though it’s still not a perfect system. As you can plainly see in our gallery, wisps of Mathilde’s hair are incorrectly blurred out when they should be in sharp focus.

The fourth camera is the same 2Mp macro that is also on the Pro model. And we still feel the same about it: not that many people will find it useful, and it doesn’t exactly produce outstanding close-up shots. So it’s almost there to make up the numbers, but if you do like macro photography it’s a feature that will make the Honor 20 more tempting than its rivals.

Last but not least is the long-exposure Night mode. It isn’t quite as good as on the P30 Pro but, again, for a phone at this price, the kind of photos you can take in very low light is impressive and definitely on a par with the Pixel 3a.

With 6GB of RAM, there’s 2GB less than the Pro and you get half the storage at 128GB. It isn’t expandable, so offloading photos and videos to the cloud is your only option once that storage is full. But for most people it should be enough.

In Geekbench and GFXbench we didn’t see any real difference in performance compared to the Honor 20 Pro. In fact, it was a couple of frames per second faster in a few of the tests.

Put simply, then, you won’t notice any difference from that ‘missing’ 2GB of RAM. And remember that the Kirin 980 is the same chip used in Huawei’s flagships such as the Mate 20 Pro and Huawei P30 Pro. So the Honor 20 offers flagship performance at half the price, and is comfortably faster than the Pixel 3a.

Battery life is slightly shorter than the Pro because the capacity is 3,750mAh rather than 4,000mAh, but it’s still very good. And the aggressive power-saving measures that Magic UI 2.1 employs means apps won’t sap power in the background and you can make it last a couple of days with light use.

For those that prefer to have maximum performance and use a multitude of apps throughout the day, expect to charge the Honor 20 each night. But you won’t have to worry about running out of juice before bedtime unless you’re using the phone as a satnav all day.

It’s called Magic UI, but the interface on the Honor 20 is to all intents and purposes identical to EMUI on Huawei phones. This could be a sticking point for some people as it’s a long way from stock Android.

The fact that it’s quite like iOS means iPhone users should get on fairly well with it, and there are a few add-ons such as those power saving tricks mentioned earlier. They can prevent apps from running in the background to extend battery life, which can make a big difference to how long the Honor 20 can last between charges.

We like that some of the stock wallpapers have been designed to hide the punch-hole camera, and you get the same great Translator app found on Huawei phones which uses the camera and the Kirin 980’s neural processing units to translate text – such as restaurant menu – into a different language, and can do the same thing for recorded speech.

We’re less impressed with Huawei’s music, video, gallery, email and other apps: you might prefer to install others or use Google’s in their place.

In the UK at least, the Honor 20 is good value. For £399, you get a phone that’s powerful and has a great screen. Cameras, too, are impressive for the price and battery life is very good. Combined, these make the Honor 20 a great all-rounder with no obvious weak areas.