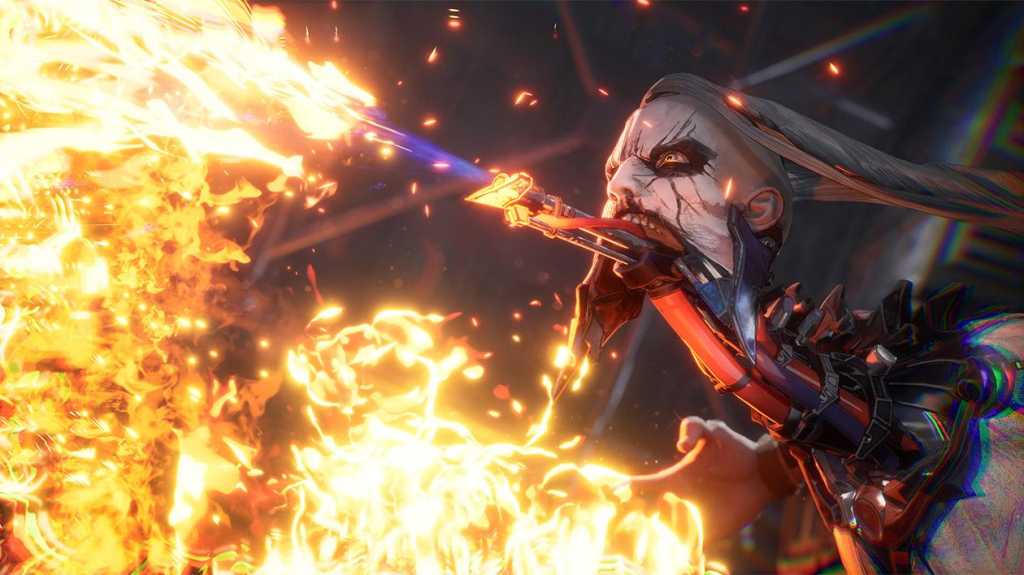 While Bleeding Edge doesn’t immediately do much to completely stand out from Overwatch’s shadow, there’s clear potential here. The challenge will be for it to find its own identity, but a melee focus and slightly darker tone might be enough, and the core combat is already there and will hopefully only get better between now and release.

Ninja Theory’s last game was the poignant, thoughtful Hellblade: Senua’s Sacrifice, a norse action title that had at its heart a subtle exploration of mental illness. It’s fair to say that Bleeding Edge is quite different.

The 4v4 online arena game, first unveiled at the Xbox E3 presentation and in development for Xbox One and PC, is essentially a third-person Overwatch with a heightened sense of aggression and ‘attitude’. Think Poochy from the Simpsons and you’re halfway there.

You can play as an android metalhead wielding an axe guitar, a vaguely voodoo healer draped in a giant robotic snake, or a sort of hip hop ninja in a kabuki mask. That’s not even mentioning the sci-fi witch, the morbidly obese pink-haired biker, or the Maori cyborg. They all ride hoverboards, because of course they do.

The 10 characters present in the E3 demo are split into three classes: Assassin, Support, and Heavy. Each class fits into a broad game role, while each character has their own set of attacks and special abilities. Again, so far, so Overwatch.

Where Bleeding Edge comes into its own is that it’s third-person, not first, and the focus is primarily on melee combat – though there are a few characters who are better when they keep their distance.

Ninja Theory has strong pedigree in melee action – before Hellblade they were responsible for DmC: Devil May Cry and Heavenly Sword – and it does show here. Fights are fast and frenetic, and there’s enough diversity in movesets to keep things chaotic without ever being overwhelming.

Every move except the basic attacks comes with a cooldown, so there’s no real way to spam annoying abilities, and there’s a good mix of damage, crowd control, healing, and support moves dotted around between the characters.

The game mode I played saw each team of 4 compete to occupy three control points and accumulate points. The control points only activated at specific times, with one activating at a time early on, and all three triggering at once by the end of the session.

That encourages a lot of mobility – aided by the aforementioned hoverboards – though travel around the arena felt a little slow at times. It didn’t help that the map I played on didn’t have much character beyond one fun twist: trains that would periodically barrel through the control points, insta-killing anyone stupid enough to stand in the way (i.e. yours truly).

Arena action is a competitive space (both in-game and out) that doesn’t leave much room for games beyond behemoths like Overwatch to thrive. And while Bleeding Edge doesn’t immediately do much to completely stand out from that game’s shadow, there’s clear potential here.

The challenge will be for it to find its own identity, but the melee focus and slightly darker tone might be enough, and the core combat is already there and will hopefully only get better between now and release.